What Jeremy Corbyn Can Learn From Linda Sarsour

One of the most important questions facing Jews on the Left today is whether there is a difference between anti-Semitism and anti-Zionism.

It gets at the heart of dual, sometimes-paradoxical commitments: on the one hand, to be a member of a once persecuted and sometimes still persecuted minority; on the other hand, to use what privilege we have to fight for those more vulnerable than ourselves.

This dual commitment is a double-edged sword, and nowhere is the internal conflict more apparent than in contemplating the Venn diagram of anti-Semitism and anti-Zionism.

If we say that there is a difference between hating Jews and hating Israel, we are seen as betraying our more hawkish brothers and sisters. On the other hand, if we smear as anti-Semites anyone who stands up for the victims of Israel’s more problematic policies, we betray our Palestinian brothers and sisters.

The question is only made more problematic when one considers the fact that some 90% of American, British and Israeli Jews call themselves Zionists, with anecdotal evidence suggesting that the number is even higher in Europe.

If you oppose the beliefs of 90% of an ethnic minority, is this tantamount to demonizing the minority as a whole?

Someone who understands this is Linda Sarsour. Someone who does not is Jeremy Corbyn.

Let’s start with Corbyn, the British Labor party’s popular, populist leader. For years, Corbyn has been dogged by personal accusations of anti-Semitism, bolstered by episodes like his defense in 2012 of a clearly anti-Semitic mural, or his hosting an event in 2010 at which a Holocaust survivor compared Israel to Nazism.

Like many who are faced with abetting anti-Semitism, Corbyn has long insisted that he is merely anti-Zionist. “In the past, in pursuit of justice for the Palestinian people and peace in Israel/Palestine, I have on occasion appeared on platforms with people whose views I completely reject,” he said by way of apology for the 2010 event.

But the British Jewish community is far from convinced. “Again and again, Jeremy Corbyn has sided with anti-Semites rather than Jews,” read an open letter to the Labour Party by the Board of Deputies of British Jews and the Jewish Leadership Council.

It’s not just Corbyn himself but the Labor Party, too, which has faced accusations of inaction against anti-Semitism. Things got so bad that in March, British Jews marched in protest bearing signs that read, “Dayenu, #EnoughIsEnough.”

Even Corbyn acknowledged the anti-Semitism in his party. “I recognise that anti-Semitism has surfaced within the Labor Party, and has too often been dismissed as simply a matter of a few bad apples,” he wrote in a letter responding to the Jewish community. “I am sincerely sorry for the pain which has been caused, and pledge to redouble my efforts to bring this anxiety to an end.”

He vowed to institute a zero-tolerance policy for anti-Semitism, and even seemed to recognize the ways in which anti-Zionism can veer into ugly territory, admitting that “comparing Israel or the actions of Israeli governments to the Nazis, attributing criticisms of Israel to Jewish characteristics or to Jewish people in general and using abusive phraseology about supporters of Israel such as ‘Zio’ all constitute aspects of contemporary anti-Semitism,” as he wrote.

So it was surprising when a new definition of anti-Semitism proposed by the Labour Party left out two examples of anti-Semitism: calling Zionism racist and comparing Israel to the Nazis.

Well, some weren’t surprised. Britain’s three leading Jewish newspapers took what they called an unprecedented step by publishing the same op ed on their covers, decrying a Corbyn-led government as “an existential threat” to their community.

“The stain and shame of antisemitism has coursed through Her Majesty’s Opposition since Jeremy Corbyn became leader in 2015,” they wrote.

Establishing a category of “political anti-Semitism” does come dangerously close to making all anti-Zionist discourse beyond the pale. And yet, it’s clear that members of UK Labor have themselves turned criticizing Israel into something of an ugly pastime, if not a downright anti-Semitic one. Just this week, a Labor Councillor accused Jews of drinking blood (he was suspended).

Corbyn’s personal stonewalling of a terrified Jewish community has simply made him the wrong messenger for criticism of Israel, precisely because he’s signaled to the Jewish community that he is not invested in holding his anti-Zionism apart from his party’s anti-Semitism.

Contrast this with Linda Sarsour. Sarsour is Palestinian and a supporter of the movement to boycott Israel. She, too, has come under a huge amount of criticism from members of the Jewish community. Jonathan Greenblatt, head of the Anti-Defamation League, accused her of fomenting anti-Semitism.

Having Linda Sarsour & head of JVP leading a panel on #antisemitism is like Oscar Meyer leading a panel on vegetarianism. These panelists know the issue, but unfortunately, from perspective of fomenting it rather than fighting it. https://t.co/s4tvBrvjBj 1/2

Unlike Corbyn, Sarsour is not the leader of the opposition and the possible future prime minister. She is an activist who went from being a community leader to a national figure with the rise of Donald Trump.

This rise unearthed some unfortunate comments, like a 2012 tweet about how “Nothing is creepier than Zionism” and an ugly one about the anti-Islam speaker Ayaan Hirsi Ali.

Similarly, Sarsour has been criticized for sharing a video on Facebook of herself speaking at a 2015 rally organized by notorious anti-Semite Louis Farrakhan marking the 20-year anniversary of the Million Man March, and for praising Farrakhan’s Nation of Islam as an integral part of the history of Islam in America. It foreshadowed the Women’s March and Sarsour’s refusal to denounce Farrakhan earlier this year, despite his penchant for anti-Semitic, transphobic and homophobic remarks.

And in a video for Jewish Voice for Peace, Sarsour seemed to minimize anti-Semitism by saying it’s not systemic. “Of course, you may experience vandalism or an attack on a synagogue, or maybe on an individual level… but it’s not systemic,” she said.

Many were upset by her comments. But at a separate event, she clarified that she meant white Jews do not suffer from things like police brutality or racial discrimination – which is true.

In another much-criticized episode, Sarsour told the Nation that there’s no room in the feminist movement for people who support the state of Israel uncritically, because “you either stand up for the rights of all women, including Palestinians, or none,” as Sarsour put it.

Thanks to an unfortunate headline, Sarsour is frequently quoted as saying you can’t be a Zionist and a feminist, when what she actually said was you can’t be a feminist and not criticize Israel – which is a very different proposition altogether.

Indeed, far from someone who minimizes anti-Semitism, Sarsour has made fighting anti-Semitism a cornerstone of her intersectional work.

In the many times I’ve heard her speak, she has never described her work combatting Islamophobia and racism without hearing her also emphasize the importance of fighting anti-Semitism.

Sarsour’s organizing has put this belief into practice. After Jewish cemeteries and synagogues were vandalized in 2017, she and Tarek El-Messidi raised over $160,000 from the Muslim community to help the Jewish community with rebuilding efforts. The amount was so far in excess of what was originally called for that she had to find ways to distribute it to multiple Jewish communities.

She has also frequently partnered with JFREJ, Jews for Racial and Economic Justice, and other Jewish organizations combatting anti-Semitism and racism. 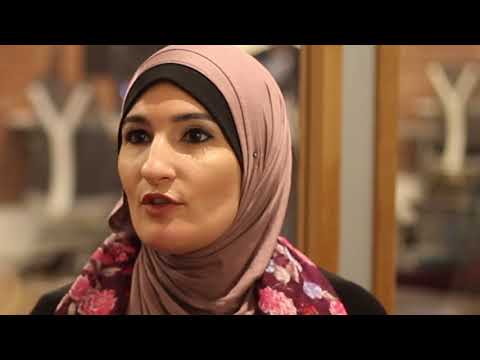 At a 2016 conference devoted to Jews of Color, Sarsour moved former Forward opinion editor Sigal Samuel to tears when she told the audience, “We’ve been waiting for you. You are the piece that was missing, that piece that can bring us together, whether it’s on African-American issues or on Israel-Palestine issues.” Addressing her “Arab Jewish brothers and sisters,” Sarsour said, “you don’t only have a space in the Jewish world, you have a space in the Arab world, too. We will welcome you and embrace you in your full complexity. We’re waiting for you at the Arab American Association.” (If you can’t quite imagine Corbyn addressing his “Jewish brothers and sisters” you’re not alone.)

The good faith of these efforts have won Sarsour support from some in the Jewish community. No fewer than 100 Jewish leaders signed a letter signed supporting her during a campaign to ban her from speaking at the commencement ceremony of the CUNY Graduate School of Public Health and Health Policy, including including J Street’s Jeremy Ben-Ami, Bend the Arc’s Stosh Cotler, HIAS’s Mark Hetfield, the National Council of Jewish Women’s Nancy Kaufman, and T’ruah’s Rabbi Jill Jacobs.

Even the ADL stood up for her right to speak, as they would not have for an anti-Semite like Farrakhan.

“Despite our deep opposition to Sarsour’s views on Israel, we believe that she has a First Amendment right to offer those views,” read the ADL’s statement, which went on to denounce the “anti-Muslim bigotry” against her.

Sarsour is someone who through establishing relationships in the Jewish community has demonstrated again and again her commitment to fighting bigotry against Jews, while simultaneously fighting for Palestinian rights, and for her own rights as a Palestinian.

In so doing, she has carved out the crucial space of being anti-Zionist without being anti-Semitic.

Corbyn could learn a thing or two from her.

Correction: An earlier version of this article misidentified the politician who accused Jews of drinking blood as an MP. He is a Councillor. We regret the error.

What Jeremy Corbyn Can Learn From Linda Sarsour