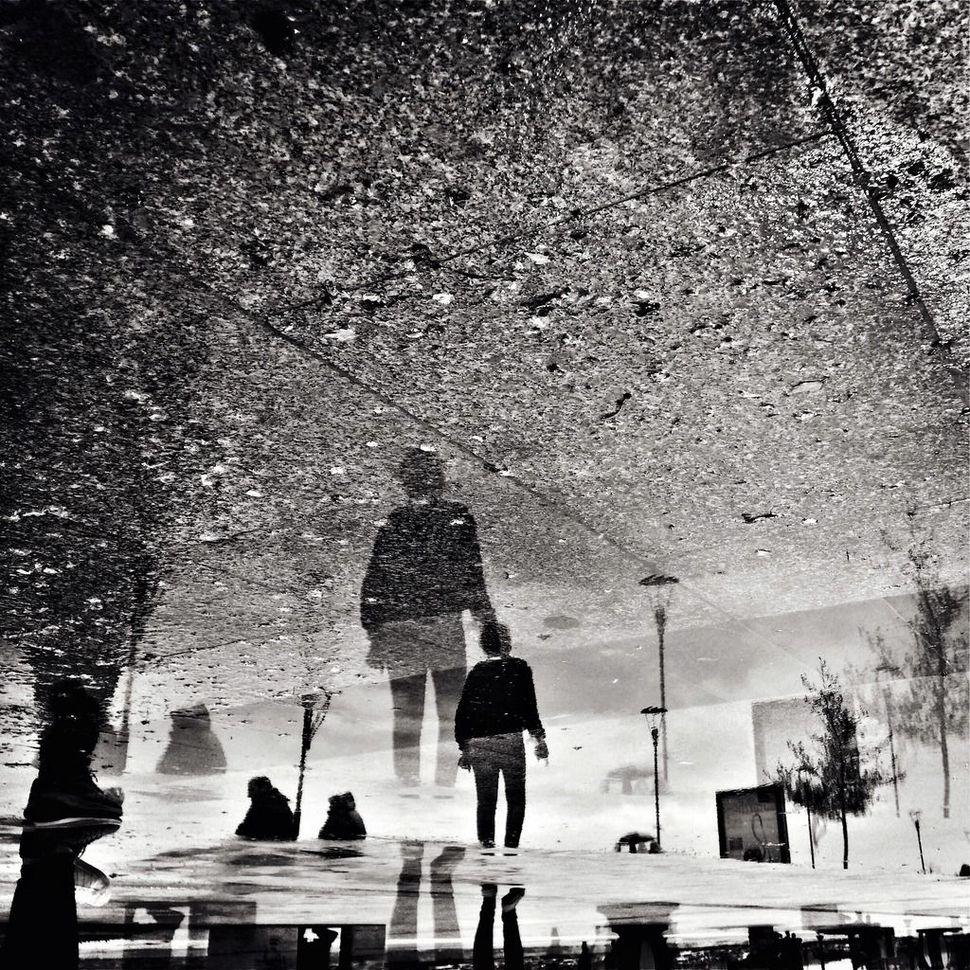 A couple of nights ago, I was walking to my apartment with a friend, who is an Ashkenazi Jewish woman. My Denver neighborhood is aggressively white, and I live with a white roommate. So needless to say, with my brown skin and my natural coils, I usually stick out like a drop of oil in a glass of milk.

This particular night, my noticeable blackness could have been deadly. There were helicopters flying above my apartment and police stationed at a couple of streets right by my front door. They were looking for someone, and the murder of Stephon Clark has shown me that police can punish anyone who fits the suspect’s description, which is usually someone black.

Watching all this, my friend and I felt both terrified and relieved: terrified of me being questioned or even shot from above, and relieved that she could use her whiteness to shield me from these consequences.

It was a shock to my system, and it made me reflect on a topic that I have desperately been wanting to abandon: Can Jews Be White?

For many, the answer is a vehement no. After Alma published the Jews of Color roundtable discussion I moderated, my friends and I encountered a lot of indignation from “white-passing” Jews who took great issue with our use of the terms “white Jew” and “whiteness” in describing the intra-community racism we had experienced.

I was pretty furious. Policing the terminology and feelings of Jews of Color was pretty much the antithesis of all we had discussed. And furthermore, many Jews actually are white.

For the record, I strongly feel that de-assimilation and the dismantling of whiteness is critical to both the eradication of racism and the survival of the Jewish people. For me, part of these efforts involve taking great care to use terms like pale, white-passing, and light-skinned to describe white Jews without explicitly calling them so.

But the truth is, I was also a bit wrong. One can be white and Jewish, and I think it’s important to face this fact. De-assimilation doesn’t mean that we must deny that many in our community are able to access systemic white privilege with few impediments.

But in this country, at this moment in time, those systemic punishments don’t always apply to white Jews when people find out that they are Jewish. Most systemic benefits of whiteness will not be taken away from white Ashkenazi Jews who possess them if someone discovers their Jewishness. No doubt, prejudice and anti-Semitism may remain, but their loan rates will stay the same and the police won’t be more likely to pull the trigger.

This is what being functionally white means, that someone can and is willing to operate in American society as white, without the fear that their ethnicity will be discovered. They can live in white neighborhoods, have the safety of whiteness, go to white schools, marry white people, and have the economic privilege of whiteness.

This is not to say that being Jewish isn’t incredibly dangerous in this country. Anti-Semitic hate crimes make up the vast majority of all hate crimes. But at this point in time in America, anti-Semitism is not comparable to systemic racism. All Jews will be a target of white supremacists, but many Jews may not ever experience racism.

This is because racism is an institutional poison based on skin color, on one’s proximity to whiteness, or one’s distance from blackness. White supremacy is an extreme ideology that asserts the superiority of Western European Christian whiteness with violence and murder. It can spread like wildfire, but it is rarely coded into every aspect of our lives. Racism is.

This is why passing as white is an extremely precarious position. It’s a delicate balance in which not only the perception of one’s whiteness is in danger, but the systemic benefits of whiteness (if any were ever granted) can be taken away at any moment.

The misuse of the term white-passing erases my own family, where many appear white, but accessing the full benefits of whiteness was and remains near impossible. For example, in segregated Washington DC, my grandmother was able to play with white, Jewish children as a child. But if they saw her father, who was darker, that privilege would either be taken away or heavily questioned.

In this country, to access the benefits of whiteness, different European immigrant groups had to shed parts of their individual cultures and seek shelter under the big tent of “white” culture. But this is an empty existence, for white culture has no value beyond power and privilege. The cultural markers of Judaism are much harder to shed than the cultural markers of say, Irish descent. This is why certain Jewish groups, like Hasidim, will never be able to fully access whiteness. As long as they retain those cultural markers, they will be perpetually othered.

But that still doesn’t necessarily make them non-white in this country.

I love that my white Jewish friends are invested in dismantling racism. But please, stop lashing out at Jews of Color for referring to you as white Jews. Being willing to acknowledge when whiteness applies to us isn’t assimilation; it’s an acknowledgement of a fucked up system.

Stop derailing conversations about racism with debates about why you aren’t white. You can’t destroy what you refuse to acknowledge. You can’t dismantle what you choose to blind yourself to.

I understand that you don’t feel white. My mother once told me that she didn’t feel black… that when she thought about who she wanted to be, all she could see was a white woman. It didn’t stop her from being called a n*gger though, or needing to straighten her hair to belong.

In the same vein, you may not feel white, but that doesn’t take away the privilege. In America, race is not a choice. It’s assigned. To change the assignment, you have to change the system, and that requires being willing to look it in the eyes. Merely claiming that you aren’t white does nothing to change racism. It can often merely be a self-serving proclamation, a tool used to obfuscate the fact that not all Jews are on equal footing when it comes to race.

Being white, being Ashkenazi, and being Jewish are three different things. And yes, you absolutely can be all of them at once.