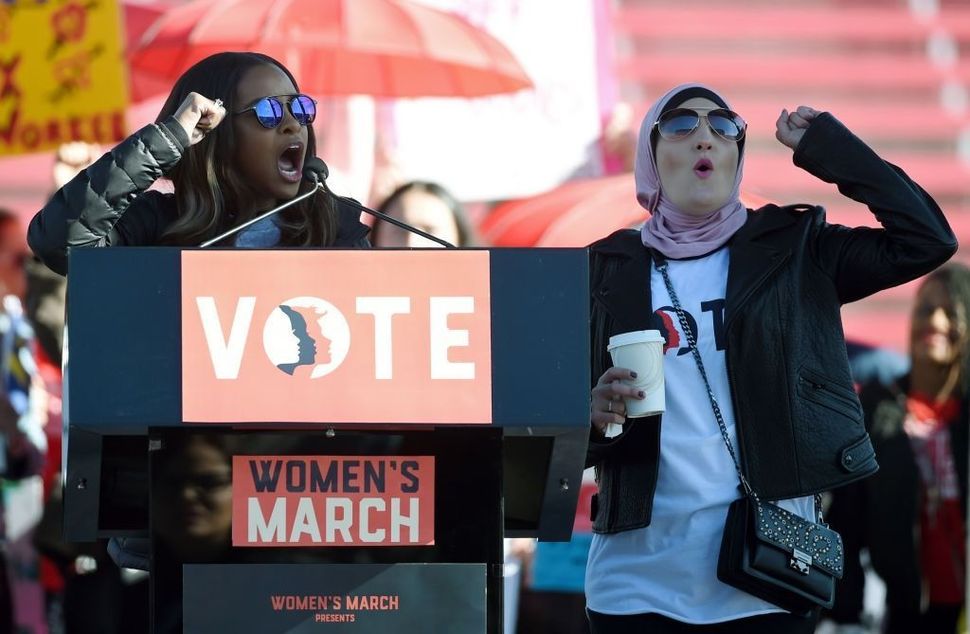 Among the women who became prominent as organizers of the Women’s March, Linda Sarsour stands out for her frequent claims to be a staunch opponent of anti-Semitism. Yet, when her close friend and fellow Women’s March co-chair Tamika Mallory was faced with sharp criticism for proudly advertising her recent participation in a major event with veteran Jew-hater Louis Farrakhan, Sarsour passionately defended her. Meanwhile, it took the Women’s March several days to come up with a tepid statement that avoided direct criticism of Farrakhan and merely declared that “Minister Farrakhan’s statements about Jewish, queer, and trans people are not aligned with the Women’s March Unity Principles.”

I first documented the collaboration between Farrakhan and leading Women’s March activists Tamika Mallory, Carmen Perez and Linda Sarsour almost a year ago. The spotlight has recently been on Mallory’s uncritical embrace of Farrakhan and the NOI, but the all too measured statement issued by the Women’s March appears to reflect Sarsour’s views and past conduct.

It was actually just a few months ago that Sarsour was as proud as Mallory to tout her appearance at a major event with Farrakhan. On October 10, 2017, Sarsour shared a two-year-old clip with her almost 200K Facebook followers that showed her delivering a short speech at a 2015 rally organized by Farrakhan to mark the 20-year anniversary of the 1995 Million Man March. As a New York Times op-ed noted, this rally “was in a way a pageant for Farrakhan and the Nation of Islam — their power and prowess, their ability to organize and attract allies, their beliefs and customs — and it centered on Farrakhan as the celebrity father figure.”

It is noteworthy that when Sarsour reposted the clip of this speech in October 2017, she wrote: “2 years ago today. I stand by every word.” This was presumably her defiant response to the Anti-Defamation League, which had sharply criticized efforts to blame Israel and American Jews supportive of Israel for police brutality against blacks in the United States.

If Sarsour were truly concerned about contemporary anti-Semitism, she would have known long before she decided to speak at Farrakhan’s 2015 rally that according to the ADL, Farrakhan “has espoused anti-Semitism and racism for over 30 years as NOI leader.” As the ADL highlighted, Farrakhan reaffirmed his status as “the leading anti-Semite in America” yet again in early 2015, when he “devoted a large portion of his annual address to followers in Chicago to the anti-Semitic myth that Jews were responsible for the 9/11 terrorist attacks.”

The ADL also reported that Farrakhan repeatedly “expressed anti-Semitism and bigotry” at events promoting the so-called “Justice or Else” rally in October 2015 that Sarsour remembers so proudly. And if Sarsour doesn’t quite trust the ADL’s judgement, she could have found a similarly unequivocal condemnation of Farrakhan and NOI at the website of The Southern Poverty Law Center, which denounces “the deeply racist, anti-Semitic and anti-gay rhetoric” of Farrakhan and other NOI leaders, whose conduct “earned the NOI a prominent position in the ranks of organized hate.”

This long and well-documented record of bigotry and hate did not bother Sarsour when she spoke at the 2015 rally, and it didn’t dissuade her from forming a rather positive image of Farrakhan’s NOI. In 2012, Sarsour embraced the group as “an integral part” of “the history of Islam in America,” emphasizing that “Sunni, Shia, Sufi, Nation of Islam — we are #Muslim, we are all part of one ummah, one family. #Islam.” Two years later, Sarsour emphasized that it was not possible to “learn or teach about the history of Islam in America without talking about the Nation of Islam (NOI).”

But as the ADL’s Jonathan Greenblatt noted recently, the NOI “has virtually institutionalized [Farrakhan’s] brand of bigotry by publishing blatantly anti-Semitic tracts and promoting a larger anti-Jewish propaganda campaign.” Greenblatt pointed out that the NOI “uses its programs, institutions, publications, and social media to disseminate its message of hate,” and he highlighted the fact that at the recent NOI convention attended by Tamika Mallory, “they were heavily promoting, ‘The Secret History Between Blacks and Jews,’” which Greenblatt described as “a multivolume tract that blames Jews for orchestrating the transatlantic slave trade” comparable to the notorious forgery “The Protocols of the Elders of Zion.”

If Sarsour wanted to see a demonstration of the poisonous effect of the NOI’s hate propaganda, she could turn to her good friend Mysonne, a hip hop MC and activist whom Sarsour has repeatedly promoted on Twitter, counting him among her “heroes” and even listing him among “Leaders of our time” on the occasion of Martin Luther King Day 2017. Mysonne, who is also a close friend of Tamika Mallory and defended her passionately in the recent controversy, explained to one of Mallory’s critics the difference between David Duke and Louis Farrakhan: “David duke is a racist who imposed his will to harm and negatively affect blacks, farakhan has a view of Jews based on the pain and harm that he can prove they’ve inflicted on blacks for hundreds of years! See the difference?”

David duke is a racist who imposed his will to harm and negatively affect blacks, farakhan has a view of Jews based on the pain and harm that he can prove they’ve inflicted on blacks for hundreds of years! See the difference?

Of course, supporters of David Duke will also be firmly convinced that he “can prove” his bigoted views, but Linda Sarsour (or Tamika Mallory, or any other prominent Women’s March leader) would not think twice about fiercely denouncing anyone who associated with Duke. Yet when people call out the bigotry among those Sarsour and other supposedly progressive activists openly associate with, an avalanche of apologetics ensues from progressive circles, denouncing critics as bullies who fail to view this bigotry with the required “nuance” and awareness of all the “complexities.”