Bernie Sanders Isn’t Just Another White Male Candidate. His Nomination Would Be Historic. 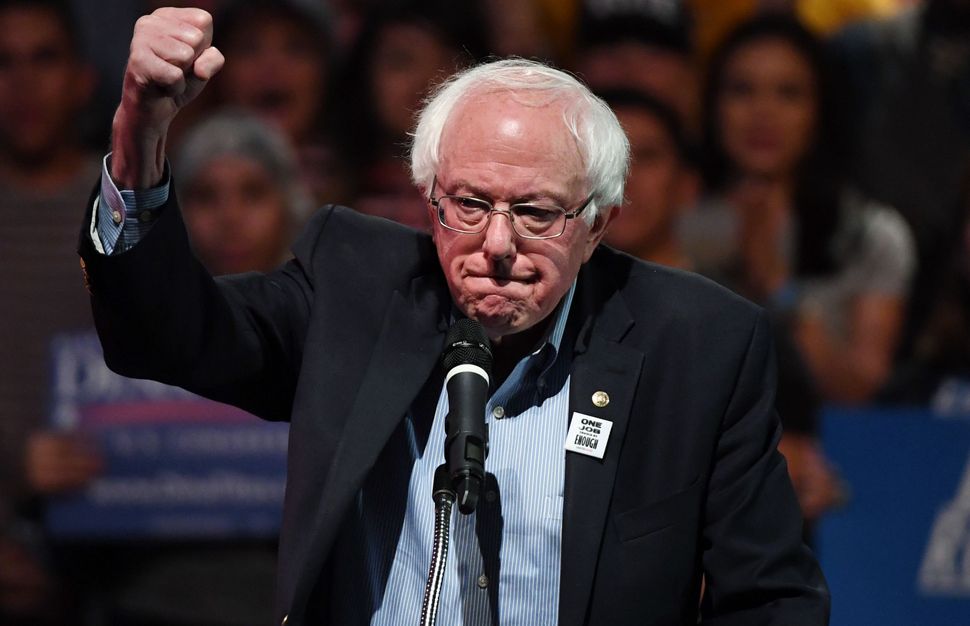 The 2020 Democratic primary will likely offer the most diverse field of candidates either party has ever put forward for the presidency. At least four serious African-American contenders (Cory Booker, Kamala Harris, Andrew Gillum, and Eric Holder) have been floated so far, as have at least four women (Elizabeth Warren, Kirsten Gillibrand, Amy Klobuchar, and Harris again).

And then there are a large number of white men — the demographic that has accounted for all but one president to date — with the most prominent names including Joe Biden, Beto O’Rourke, and Bernie Sanders.

But this quick taxonomy leaves out one detail that was likewise mostly overlooked during the 2016 primaries. Sanders is white, yes, but he’s also Jewish, and last time around he got closer to the presidency than any Jew in history ever had. Based on his standing in early polls, he has a real shot to win the nomination this time. But the response to that history-making prospect, among Jews and non-Jews alike, has been decidedly muted.

In February 2016, the New York Times ran an article about the subject, entitled “Bernie Sanders Is Jewish, but He Doesn’t Like to Talk About It,” which began by quoting a New York rabbi who expressed dismay that Sanders had described himself as “the son of a Polish immigrant who came to this country speaking no English and having no money.”

The article went on to describe the contours of Sanders’s Jewish identity: the son of an immigrant whose family was murdered in the Holocaust on one side and the grandson of immigrants on the other, Sanders is entirely Ashkenazi Jewish, was born and raised in Brooklyn, does not regularly attend synagogue, is married to a Catholic, defines himself by the struggle for social justice on behalf of all oppressed peoples, and has a left-leaning view of the Israeli-Palestinian conflict. He is, in short, probably not very different from a lot of Forward readers. 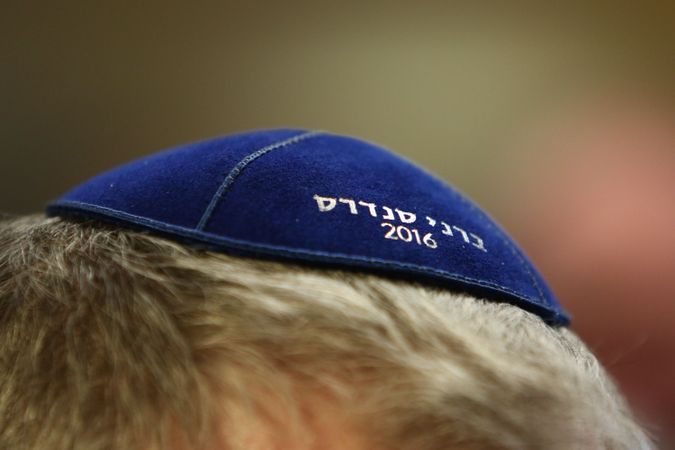 A yarmulka that reads “Bernie Sanders 2016” in Hebrew. Image by Getty Images

To a vocal segment of Jews, that’s not good enough. “People are confused why Bernie Sanders won’t own his Jewishness,” ran a February 2016 headline from the Jewish Telegraphic Agency. “Bernie Sanders is Jewish. Why isn’t that convincing Jews to vote for him?” asked the Washington Post the following month. Tablet’s Jamie Kirchick went with “Bernie Sanders’ Jewish Problem, and Ours,” a callback to an infamous article by Norman Podhoretz. Kirchick criticized Sanders for skipping the AIPAC conference, for hiring a Jewish outreach director affiliated with the anti-occupation group IfNotNow, and for his own outspokenness on behalf of Palestinians.

Kirchick also acknowledged that there are left-wing Jews who appreciate Sanders for exactly those reasons. “But to a particular type of commentator, and a particular type of Jew, the relevance of Sanders’ remarks lay not in what he said,” he wrote. “Rather, it is the act of virtue-signaling—only we, the righteous Jews, as opposed to those cold-hearted tribalists, appreciate another people’s suffering—that sends the proverbial thrill down the leg.”

Still, even among Jews who might sympathize with Sanders, there are doubts that he could win over the mostly Christian country that (sort of) elected Donald Trump. The Times article quoted an elderly retiree in Florida as saying that while she found Sanders’s Jewishness “very uplifting,” nonetheless “Middle America will never accept him.” It concluded by quoting a 22-year-old who was similarly concerned that “Some hateful people might bring that up” and who added “It wouldn’t be hard for it to be considered a bad thing.”

While Gallup polls taken over the past three years have consistently shown that Sanders is popular nationally, many Jews still find it hard to believe that a guy who sounds like their elderly relatives could win a presidential election.

Sanders himself addressed his Jewish identity directly when asked about it by CNN’s Anderson Cooper in a March 2016 debate. “Look, my father’s family was wiped out by Hitler in the Holocaust,” he said, adding, “I know about what crazy and radical and extremist politics mean. I learned that lesson as a tiny, tiny child when my mother would take me shopping, and we would see people working in stores who had numbers on their arms because they were in Hitler’s concentration camps. I’m very proud of being Jewish. And that’s an essential part of who I am as a human being.”

One could argue that Sanders has never run as a Jew, but it’s not like any of his likely rivals in the 2020 field are explicitly running on their identity either. Given that, it’s strange that Jewish reactions to Sanders’s Jewishness seem to range from indifference, to concern about anti-Semitism, to skepticism that he even counts as a Jew, with only a handful of articles in left-wing publications (by Jesse Myerson, Marissa Brostoff, and myself) expressing actual pride in seeing a Jewish socialist competing at the highest level of politics.

Jews may be a tiny minority of Americans, but in terms of influence on politics we’ve long punched above our weight. There have been plenty of Jewish cabinet secretaries, Supreme Court justices, senators, representatives, governors, mayors, campaign advisors, and major donors. There’s even been one vice presidential candidate, Joe Lieberman, whose selection by Al Gore in 2000 was treated as a historical milestone.

Lieberman, of course, is Orthodox, strongly pro-Israel, married to a Jewish woman, and wears his Jewishness on his sleeve. But none of that makes him any more Jewish than Sanders, and if anything it makes him less representative of American Jews writ large. 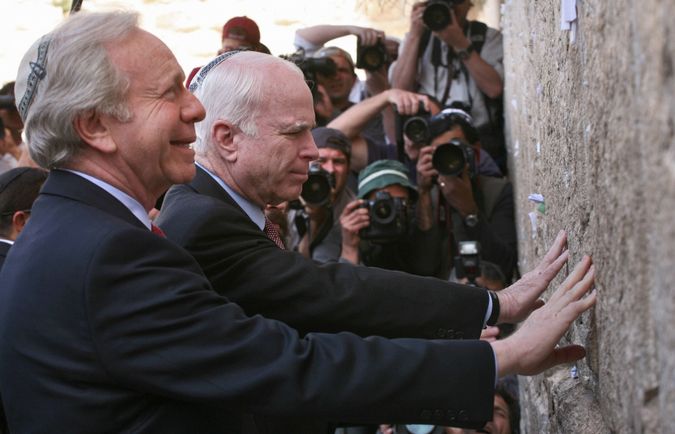 It’s not very surprising that the quarter of American Jews who vote Republican, which significantly overlaps with the minority who are Orthodox, wouldn’t want to claim Sanders.

But what about the majority who support Democrats and are generally more secular? While it’s hard to come by definitive polling, Hillary Clinton cleaned up against Sanders in most of the best known liberal Jewish communities in the country, from Manhattan’s Upper West Side to Maryland’s Montgomery County and from West L.A. to Boca Raton.

Anecdotally, Jews seemed to split along the same generational lines as Democrats as a whole, with millennial Jews supporting Sanders and older Jews strongly preferring Clinton.

Sanders isn’t unrepresentative of American Jews in terms of his lifestyle or his values, but he is unrepresentative of institutional Jewish identity, the Jewishness that expresses itself through synagogues and avowedly Jewish organizations, that presents itself as authoritative and leaves many of us feeling like our own Jewishness is somehow deficient.

The Jews who are the most like Sanders are the Jews who are least likely to foreground Jewishness in our own lives, even though there are a lot of us and even though many of us feel strongly Jewish and could hardly be mistaken for anything else.

In a country where “Jewish” is often taken to be a strictly religious label, Sanders is an ethnic Jew, a cultural Jew, and a left-wing Jew, all of which seem to be covered by the blanket term “white.”

But no American presidential nominee has ever been white the way Sanders is white. And while that distinction may not matter to some Jews, it will absolutely matter to the white supremacist and anti-semitic elements who have been emboldened over the past several years. For Sanders to win the Democratic nomination, let alone the presidency, wouldn’t just be a historic achievement.

It would be a powerful rebuke to the forces that brought Donald Trump to power.

David Klion is a writer in Brooklyn whose work has appeared in The Nation, The New York Times, the Guardian, Jewish Currents and other publications. Follow him on Twitter, @DavidKlion.

Bernie Sanders Isn’t Just Another White Male Candidate. His Nomination Would Be Historic.