We Ranked Democratic Candidates By How Much They Give To Charity 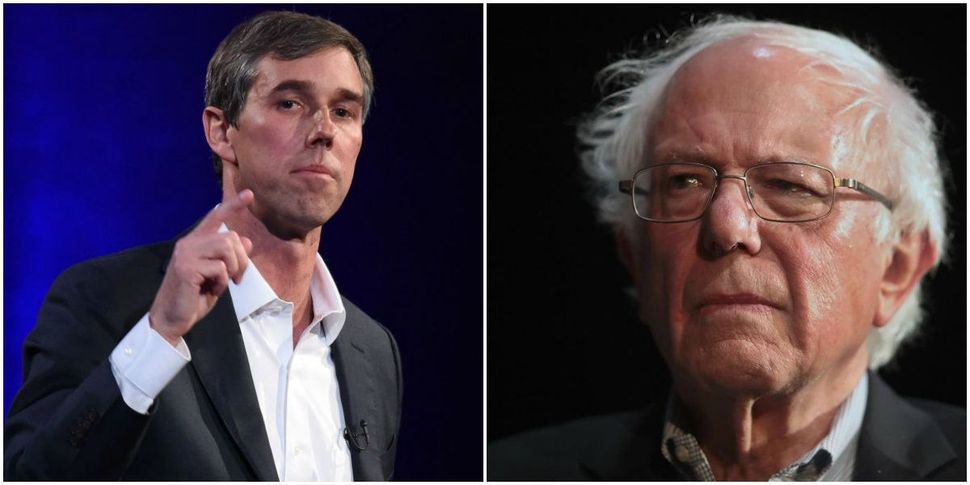 Rep. Beto O’Rourke and Senator Bernie Sanders both released old tax returns, showing how much they and their spouses gave to charity Image by Getty/Forward Montage

And as a benefit of the heady collision of tax time and a pre-presidential election year, major 2020 candidates have continued to release their tax returns, under growing pressure from critics and constituents.

Over the past days a flurry of 2020 Democratic hopefuls have released recent tax returns, including Senator Bernie Sanders, Representative Kamala Harris, Representative Beto O’Rourke, Senator Kirsten Gillibrand, Senator Amy Klobuchar, and Governor Jay Inslee. Senator Elizabeth Warren was one of the first to release her returns, on April 10.

Senator Cory Booker and buzzy Mayor Pete Buttigieg have not yet released their returns. Neither has former Vice President Joe Biden, though he did as recently as 2015. Notably, President Trump has also not released his tax returns, though he is under ongoing pressure to do so.

In an article in the Washington Post, James Hohmann calculated what percentage of their income that candidates and their spouses gave to charity in the past years, based on the released returns. The results…really, really range.

Tzedakah, literally translated as “justice,” is an obligation, not a suggestion, in Jewish text and tradition. The Torah demands that Jews give ten percent of their income away, and Maimonides famously argues that the highest forms of tzedakah involve giving anonymously to anonymous recipients. And the Talmud cautions that whether or not some recipients are actually in need or are merely grifters should not be the concern of the giver.

But enough! Let’s examine the generosity of these 2020 candidates:

.@BetoORourke speaks in Hampton, VA: “We’ve got to make sure that we have an economy that works for all at a time that it works well for far too few and not at all for far too many.” pic.twitter.com/vxWIGiq2JK

Beto O’Rourke is famous for raising money — his grassroots senatorial campaign in 2019 nearly took down Ted Cruise, thanks in part to an onslaught of individual donations. But O’Rourke himself hasn’t been so generous — with just $1,166 of his and wife Amy Hoover Sanders’ $370,412 income in 2017 given to charity that year, he is the least-giving candidate so far on record, at one-third of one percent of his income given up for those in need.

Her donors in the 1st quarter included some of the country’s most rich and famous people: She received checks from actor Ben Affleck, filmmaker Lee Daniels, Silicon Valley investor Sam Altman and more https://t.co/vNrfRBD8CW pic.twitter.com/y17hyc9uTJ

At $27,000 given to charity in 2017, Kamala Harris and husband Douglas Emhoff gave significantly more than O’Rourke and Hoover Sanders, though at a combined income of $1.9 million, this still only comes out to 1.4 percent of their income that year. Hohmann points out that Harris reported zero charitable giving in the first three years when she was attorney general, ramping up to the tens of thousands after she wed Emhoff in 2014.

(2015 tax returns, the most recent available, show that Joe and Jill Biden gave $6,900 of their combined $392,000 income to charity, or about 1.8 percent. Memorably, tax returns released by the Bidens in 2008 showed that the couple had given an average of only $369 to charity a year for the previous 10 years.)

Amy Klobuchar and her husband just unseat Gillibrand, having given $6,600 of their $338,500 income to charity last year, or a little less than two percent of their income.

Sen. Bernie Sanders releases 10 years of his tax returns, showing how his 2016 presidential run turned him into a millionaire https://t.co/sbycxZ6P3v pic.twitter.com/GHC8j3Dt6a

The most giving (so far):

Coming out decisively as number one is Elizabeth Warren, who with her husband Bruce Mann gave $50,000 of their combined income of $906,000 to charity in 2018, or 5.5 percent of their income.

We’ll have to see Buttigieg, Booker, Biden, or Trump call for a reordering of this list in the coming weeks and months. Every one of them, for what it’s worth, comes in far under the ten percent mandated by Torah law.

There’s solidarity in that. But it’s worth noting that when Mitt Romney released his returns in the lead up to the 2012 election, he and Anne Romney were revealed to have given $4 million out of their $13.7 million income in 2011 to charity, or over 29 percent of their income that year.

In the same year, Hohmann notes, Barack and Michelle Obama gave away 22 percent of their combined income. So, it can be done.

We Ranked Democratic Candidates By How Much They Give To Charity