Everything You Need to Know About Ivanka and Jared’s Shavuot 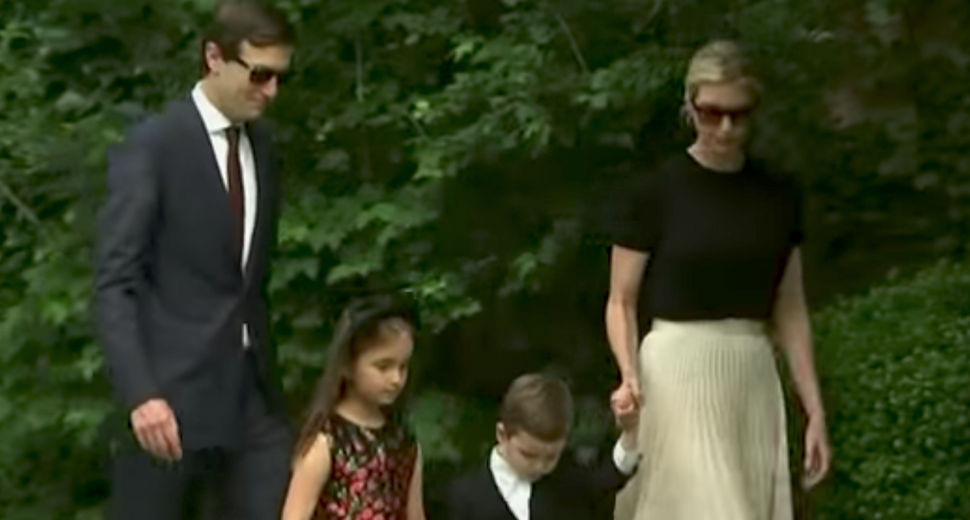 Fidget spinners, Raybans, and Joshua Kushner’s forearms were all on glorious display during the Kushner-Trump family’s trip to Shavuot services yesterday. Here’s what we know:

-The Holiday: Shavuot celebrates the giving of the Torah at Mount Sinai, as well as the harvest season, which in ancient times meant bringing sacrifices to the Temple in Jerusalem. The modern tradition is to stay up all night studying Torah, and to eat dairy-themed food. The Whitehouse officials and their family opted to attend a morning service, which the Daily Mail referred to as “taking a day off work for a Jewish holiday.” Trying to keep your small children attentive while sitting through a long prayer service is not a vacation from work! Unless your work is “fixing” the Middle East while under investigation by the FBI. Then it might feel like a vacation.

-The Synagogue: American Friends of Lubavitch

-The Clothes: The family was beautifully dressed for the festival, with Jared and Joseph in suits and Arabella in Oscar de la Renta. Ivanka accessorized her look with exquisite black heels, perhaps from the same Chinese factories where activists have disappeared this week while investigating Trump’s factory’s practices.

-The Cool Female Agent: The family was trailed by a lady security agent, suggesting that Ivanka employs women in traditionally male jobs, like her own. No word yet on if the agent will be offered a single hour of paid maternity leave.

-The Fidget Spinner: Arabella committed to being on brand with this season’s best accessory: a fidget spinner, the fad focus-toy invented by a Jewish woman to keep Palestinian children from throwing rocks at Israeli cars. Was Arabella given the fidget spinner by her parents to send a tacit message about Israeli diplomacy? We can’t answer that but we do know that Joshua Kushner, Jared’s younger brother, was holding a clear plastic bouncy ball, which is fitting because, much like a bouncy ball, Kushner has failed to even once speak out against any policy of the Trump administration.

Joshua Kushner: Sans supermodel girlfriend Karlie Kloss (maybe she’s more of a simchat torah person) the younger Kushner rolled up his shirtsleeves and carried nephew Theodore’s stroller up the synagogue stairs with a hotness that will continue to warm America along with the results of the possible withdrawal from the Paris climate agreement.

God willing, the day came to a triumphant end with a thick slice of cheesecake and a nice cup of covfefe.

Jenny Singer is a writer for the Forward. You can contact her at Singer@forward.com or on Twitter @jeanvaljenny.

Everything You Need to Know About Ivanka and Jared’s Shavuot