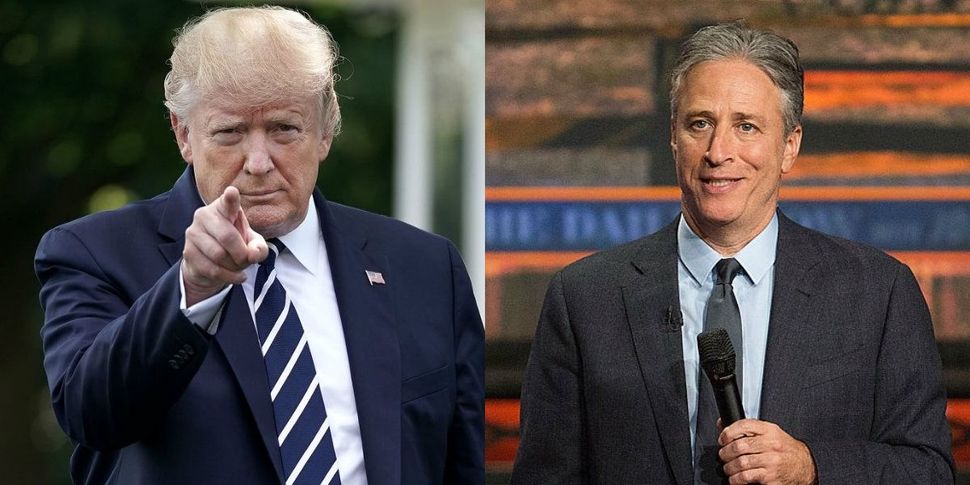 It’s no secret that President Donald Trump once criticized comedian Jon Stewart using language that seemed to invoke Stewart’s Judaism. He did it on Twitter, in 2013.

That tweet resurfaced this week, when shared derisively by the account for “The Daily Show With Trevor Noah,” then later by celebrities including the singer Pink.

Let’s revisit the circumstances around those tweets, and why they’re being resurfaced now:

Click here for a piece about Bernie Sanders singing with Soviets at a drunken party back in the 1980s.

There wasn’t an obvious catalyst for this April 2013 tweet — Ross Luippold, writing for the Huffington Post, speculated that the future-president had responded the day before to a tweet from a man named Craig Devlin, who had tweeted at Trump’s account, “Please run for president, Jon Stewart would destroy you!” Trump responded to Devlin, “Jon (L) is not smart enough!”

The next day, Trump followed up with his “Jonathan Leibowitz” tweet.

Jonathan Stuart Leibowitz is Stewart’s given name — in November 2011, Jeremy Gillick wrote in Moment Magazine with a glee highly recognizable to any Jewish pop culture journalist, “Stewart, born Jonathan Stuart Leibowitz, has also become an ambassador of Jewishness…He has referred to himself as ‘Jewey Von Jewstein’ and cracked wise on Jewish noses, circumcision, anti-Semites, Jews who play baseball (a short list), Israel as ‘Heebie Land’ and his grandma at Passover.” As Gillick points out, he told the New Yorker in 2002 that growing up in Trenton, New Jersey, class bullies called him “Leibotits” and “Leiboshits.” As an athlete in college, opposing fans once screamed the word “kike” at him. And at one of his earliest comedy sets in New York City, the host mispronounced his last name. Because of that and, as he told the New Yorker, “some leftover resentment at my family,” he changed his name.

The Trump “Leibowitz” tweet doesn’t directly attack Stewart’s Judaism or contain a slur. But there’s no reason to mention the name, except to point out that it’s Jewish. If Stewart’s real last name was “Davidson,” for example, it’s hard to imagine that Trump would have written the same tweet. “Trump seemingly tried to either shame Stewart for hiding his Jewish heritage or for being Jewish altogether — the motives are unclear,” Tara Golshan wrote for Vox in May 2016.

Stewart retaliated on his show, christening (as it were) Trump with his own new name: “F**kface VonClownstick, musing, “I wish you would embrace the Von Clownstick heritage.” That footage isn’t available on YouTube, but Stewart says he remembers tweeting it (he didn’t), so the timeline here is a little confusing.

Trump tweeted several more times about Stewart, apparently in response to that “Daily Show” segment, usually adding a question mark or an “L” after Stewart’s name.

If Jon Stewart is so above it all & legit, why did he change his name from Jonathan Leibowitz? He should be proud of his heritage!

Jon Stewart @TheDailyShow is a total phony –he should cherish his past—not run from it.

A week later, Trump was still talking about Stewart:

“@NJWineGeek: @realDonaldTrump but Jon Stewart has a much higher IQ. Wrong, Jon Stewart(?) is an obnoxious lightweight with a lower I.Q.

His reflections continued throughout the week:

@caaataclysm Little Jon Stewart(?) Is a pussy, he would be hopeless in a debate with me!

These tweets — especially Trump’s original “Leibowitz” tweet — have been resurfaced by comedians occasionally since Trump’s bid for election. In the first week of November 2016, Stewart performed at the “Standup For Heroes” comedy event in New York City, riffing on the incident. He joked that when he read the tweet he thought, “‘Oh, I think this guy is trying to let people know I’m a Jew.’ And I think to myself, ‘Doesn’t my face do that?’ Honestly, like, where have you seen this face other than a poster for ‘Yentl’?” Stewart went on to describe his own face as “a little schmeary.” He added, “It would be funny if it wasn’t so toxically fucking crude and horrible, but…”

Comic talkshow host Samantha Bee exhibited the tweet in a segment in 2018 called “We Need To Talk About Anti-Semitism.”

“You are NO Stewart you fae little half man,” a Twitter account with 12,000 followers tweeted in June 2018, accompanying a picture of Stewart’s face. “You are Jon Leibowitz [sic] why hide that?”

This week, “The Daily Show” Twitter account under Trevor Noah [brought up the tweet again, with the caption, “When you won’t stand for anti-Semitic tropes.” The remark is likely in reference to insistence by the president as well as representatives of the administration that Democratic members of congress have used anti-Semitic tropes, particularly the infamous incident in February, in which Ilhan Omar tweeted about AIPAC. In a tweet on Tuesday just hours after the joke from the “Daily Show” account, the president called Minnesota representative Ilhan Omar an “American hating anti-Semite.”

For his part, Trump is prone to comments about Jews that hint strongly at anti-Semitic tropes without stating them explicitly. During the presidential campaign in 2015 he told members of the Republican Jewish Committee, “I know why you’re not going to support me. You’re not going to support me because I don’t want your money…Look, I’m a negotiator like you folks, we’re negotiators.”

In a 1990 profile of Donald and Ivana Trump in Vanity Fair by Marie Brenner, Brenner reported that Ivana Trump’s lawyer told her that Trump at the time kept a book of Hitler speeches, “My New Order,” near his bed, and read them regularly. When Brenner inquired about this, Trump asked her, “Who told you that?” Brenner said she didn’t remember, and Trump responded, “Actually, it was my friend Marty Davis from Paramount who gave me a copy of ‘Mein Kampf,’ and he’s a Jew.”

Brenner got in touch with Davis, who told her, “I did give him a book about Hitler. But it was ‘My New Order,’ Hitler’s speeches, not Mein Kampf. I thought he would find it interesting. I am his friend, but I’m not Jewish.”

Trump told Brenner, “If I had these speeches, and I am not saying that I do, I would never read them.”

Brenner reflected in the article: “Trump is no reader or history buff. Perhaps his possession of Hitler’s speeches merely indicates an interest in Hitler’s genius at propaganda.”

In the same article, Brenner wrote that a friend of Ivanka Trump’s said that Trump’s employee liked to use the phrase “Heil Hitler” at meetings as an inside-joke between the two men.

For his part, Stewart has also used anti-Semitic tropes to joke about his last name — though since he is proudly Jewish, his words have a profoundly different flavor than Trump’s. In an interview with Terri Gross at Manhattan’s 92 Street Y in 2010, Stewart joked of his brother Larry Leibowitz, then the chief operating officer of the New York Stock Exchange — “Changed his name from Stewart. Wanted to seem more ‘financial.’”