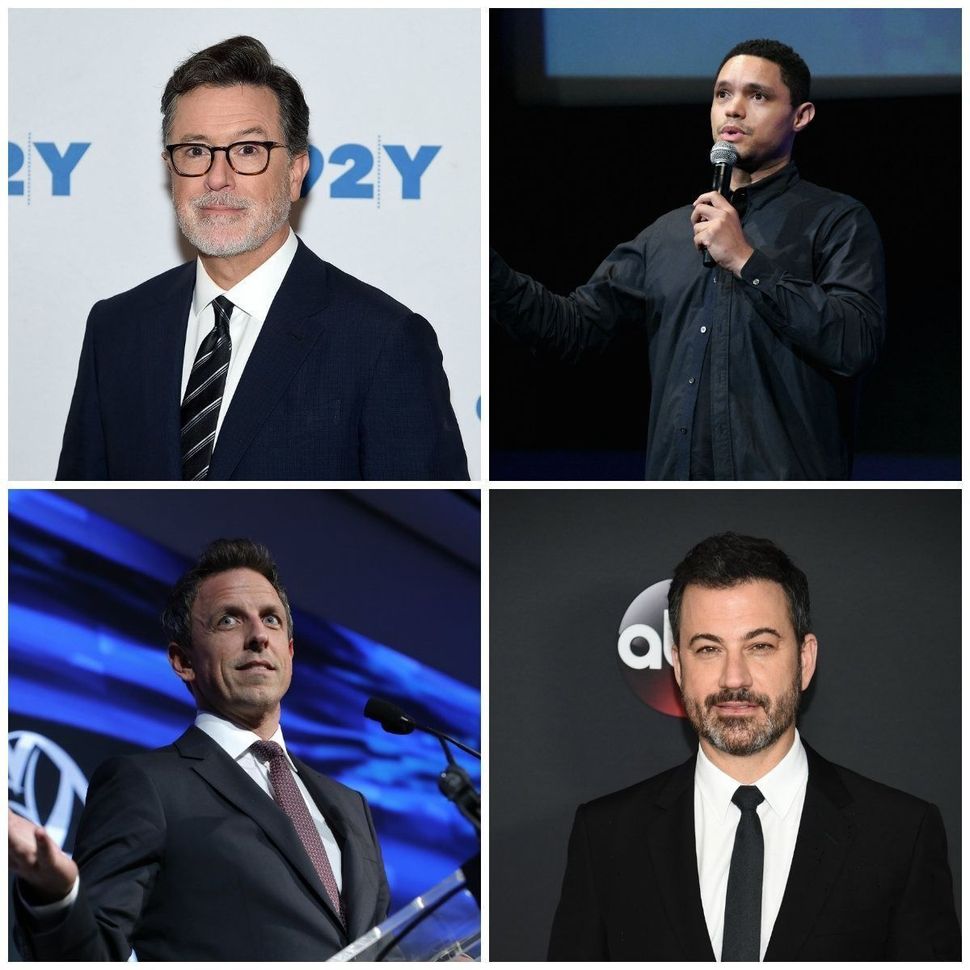 Late night hosts Trevor Noah, Samantha Bee, Stephen Colbert, and many others had a lot to address this week, and very little of it was funny. The denizens of the late night world harnessed their star power to address the Pittsburgh Tree of Life Synagogue shooting during their sets. We at the Schmooze applaud these supporters of our Jewish people for speaking about this violent tragedy. We also appreciate that while most of these hosts are not Jewish, many of their writers are. Below, what each had to say.

1: “Hate is not what America stands for” – Stephen Colbert

Like Sarah Silverman and many others, Colbert was not amused by President Trump’s response to the shooting. On his “Late Show with Stephen Colbert,” the 54-year-old comedian went so far as to call the president’s rhetoric (which essentially blamed the synagogue for not having an armed guard), “sickening.” He sarcastically added, “In fact, why didn’t the Jewish people have an armed guard for the last 5,000 years?”

The solemn monologue concluded with this powerful statement: “It was the worst act of violence against Jewish people in U.S. history,” he said. “It’s tragic, it’s sickening and our thoughts are with the victims, their families and the larger Jewish community. But more than that, I want to say hate is not what America stands for. And tonight, all of us are with you.”

2: “It’s the closest thing I’d say I have to an ancestral home” – Seth Meyers

The 44-year-old comedian sat behind his desk after the shooting, the lights of New York City flashing in the background. He addressed his audience by expressing deep desolation over Pittsburgh. Pittsburgh is Meyers’ father’s hometown, he explained, and a place that still means a lot to the family. Even though Meyers doesn’t identify as Jewish, he revealed that his great-grandfather was Jewish, his wife is Jewish, and his kids will be Jewish. “We’re thinking of you Pittsburgh,” a grave-looking Meyers concluded.

Kimmel opened his set following the shooting with a few words on the many scary attacks on America recently, particularly speaking about the pipe bomb culprit who was arrested in Florida earlier this week. After denouncing Trump for many things he’s said about “fake news” and the media, the host analyzed Trump’s Pittsburgh condolence tweet. “There’s no way he wrote that, but okay,” Kimmel opined, noting that moments later the President tweeted something about the Red Sox. Kimmel quipped: “This is what he’s thinking about, on the day someone went into a synagogue with an AR-15.”

4: “Don’t Have to Be a Rocket Scientist to Draw Lines:” – Trevor Noah

President Trump urged America to come together and unite after the shooting that took 11 Jewish lives, but Trevor Noah says this “unity” doesn’t mean much coming from Trump. “He’s saying ‘let’s come together’ in the same way aliens come to Earth and they’re like ‘let’s come together as we pillage the entire earth,” he joked. The 34-year-old late night host then honed in on the shooting in relation to Trump’s rhetoric by saying: “You don’t have to be a rocket scientist to ‘draw lines’ between what the president says and both the shooting at a Pittsburgh synagogue and the bombs mailed to prominent Democrats.”

5: “The truth is the Republican party tolerates anti-Semitism and benefits from it”- Samantha Bee

Samantha Bee does not hold back. She went after the Trump administration, saying mainstream conservatives don’t preach hateful speech outright but use coded slurs like “coastal elites,” “Hollywood liberals” and “John Leibowitz” (John Stewart’s given name.) The Canadian-American even brought up smears against George Soros, who’s really just a wealthy “sleepy Zadie,” as Bee puts it. “Wealthy scheming world dominators,” as the “Full Frontal” host explains, is an anti-Semitic slur much, much older than Soros. She was not having it, and neither are we.

6: “Trump Knows the Only Way They Can Energize Their Base is Through Fear” – Sarah Silverman

Similar to Samantha Bee, in Silverman’s “quickie” televised sit-down talk, she argued for a connection between Trump’s rhetoric and the terrorist attacks this past week.

Notice a common theme here? Clearly, late night hosts are not happy with Trump’s response to the shooting. Many even feel his choice of words continue to spark violent actions. Remember, language is one of the most powerful tools, but not as powerful as an AR-15. Uniting — whatever that may mean — is the only answer.