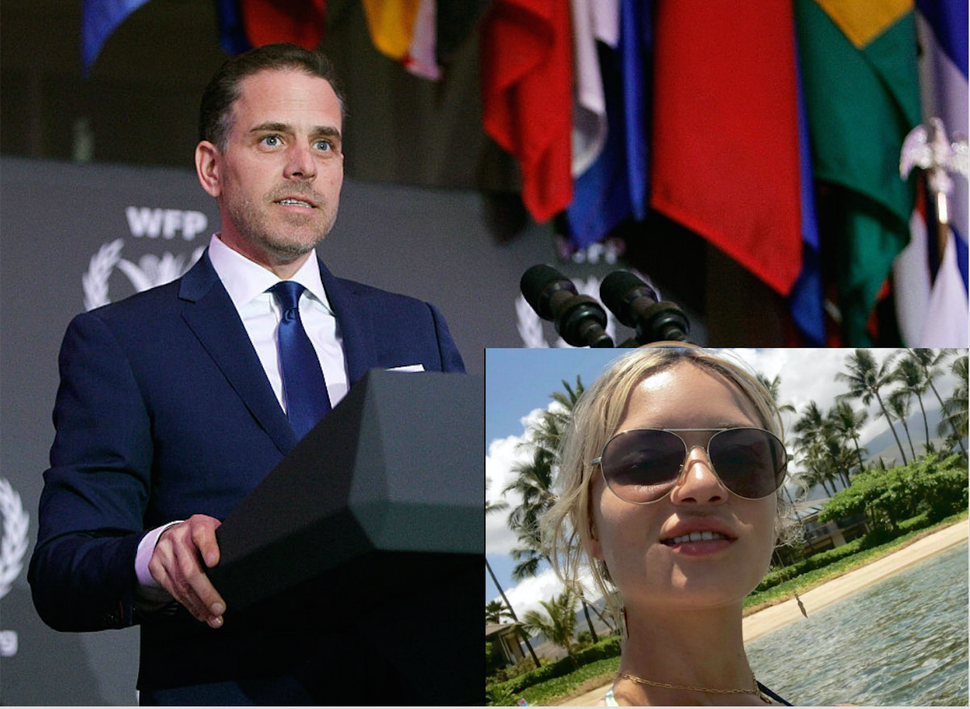 Hunter Biden, and Melissa Cohen (inset,) were married in May 2019 Image by GETTY IMAGES/FORWARD MONTAGE, facebook

In the 2016 presidential elections, it was said that whichever candidate won — Donald Trump or Hillary Clinton — the president would have Jewish grandchildren. Both Trump and Clinton have a child who married a Jewish person.

Joe Biden, a hopeful for the 2020 Democratic bid, would also bring Jewish in-laws to the White House. In fact, he would hold the particular distinction of bringing a son and daughter-in-law with matching Hebrew tattoos. Hunter Biden, the former Vice President’s son, wed a Jewish woman named Melissa Cohen in May. An in-depth portrait of Hunter in the New Yorker on Monday details their brief courtship and recent nuptials.

The piercing article by Adam Entous paints a struggling — but ultimately decent — man at the heart of a traumatized family. Hunter Biden, a lawyer-turned-businessman from a family of American political royalty, has captured massive tabloid attention for years, which has only built since his father announced his third attempt at the presidential candidacy. Biden and his son Hunter, 49, are the only members left of a nuclear family that once included Neilia and Naomi; Hunter’s mother and sister who died in a car crash in which Hunter and his brother Beau were injured. Beau, who had served as Attorney General of Delaware, died of cancer in 2015, at age 46.

Hunter Biden has dealt with alcohol and drug addiction throughout his adult life. He was named in the Ashley Madison infidelity scandal, though he denies involvement. In June he was sued by a woman who claims to be the mother of his infant child. And in perhaps his moment most observed by the American people, he forged a romantic relationship with Hallie Biden, his brother’s widow, while still legally married to his own wife. That relationship was over by January 2018.

Biden met activist Melissa Cohen in early May 2019. Within a month, they were married. He’s Roman Catholic, she’s Jewish. He’s American, she’s South African. He’s a businessman with a background in law who has flitted — at times, some say, unethically — close to government affairs. Entous’ article in the New Yorker describes Cohen as a filmmaker, though there isn’t much evidence of her work. She is seventeen years his junior.

Yet the couple, who became engaged within a week of knowing each other, seems blissful together.

Cohen, a Johannesburg-local, is an outspoken liberal and a devout Jew from a tight-knit family. Her parents, Zoe and Lee Cohen, are nearing their 50th wedding anniversary. Cohen, who now lives in Los Angeles, is divorced from Jason Landver, a Jewish Los Angelean and graduate of Milken Community Schools.

Cohen, who appears to have spent time since her 2014 divorce on travel and family, posts regularly on social media about justice issues, focusing on the plight of the environment, mistreated and endangered animals, indigenous peoples, mistreated workers, and refugees. Long before she met Biden, she was outspokenly supportive of the Obama presidency, and critical of President Trump. After the white supremacist marching at Charlottesville she wrote of the president, “To those of you who voted for this POS [piece of s**t] you should be ashamed. That’s all.”

Cohen has also been proudly demonstrative of her Jewish identity. On February 17, 2018, she wrote of a video of a desecrated Jewish cemetery in Paris: “I’m always amazed that human beings could hate a people so much…for our religion!!!” She also shared a video of Israeli Rabbi Micha Odenheimer condemning the Netanyahu government’s move to deport Africans from Israel.

Cohen, the New Yorker reported, has a tattoo of the word “Shalom,” or “peace,” in Hebrew on her bicep. Before their sudden wedding, which was not religious, Hunter Biden got an identical tattoo. He says that he called his father after the wedding to tell him the news, and put the presidential hopeful on speakerphone with his new wife. “Thank you for giving my son the courage to love again,” Biden told Cohen.

“Easy fasting everyone on the approaching Erev Yom Kippur,” she wrote in September 2017. “I love you. I forgive you all and hope u forgive me. heres to being inscribed in the book of love light happiness health wellness peace and success.”

A couple who marries faster than challah-dough can rise, one-half of whom is mired in controversy, at the heart of a political campaign? It seems almost foolish to hope it could work. But we’re romantics. We can’t help but wish Biden and Cohen love, light, happiness, health, wellness, peace and success.