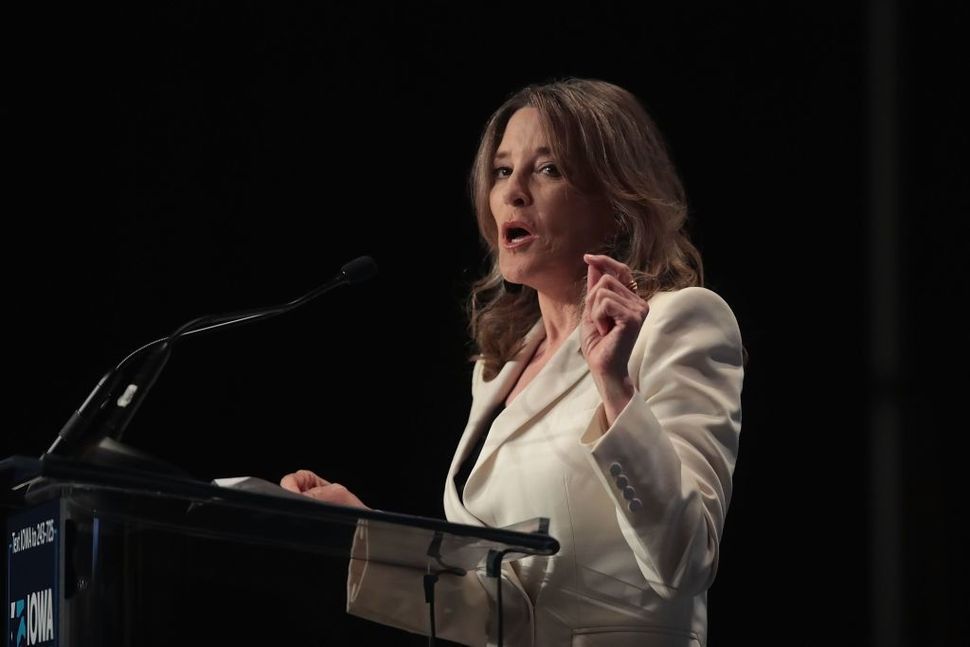 The list of candidates running for the Democratic nomination for the 2020 presidential election is a who’s who of the Democratic party — and in a more literal sense, a (squints) wait, who’s that?

On Thursday night, a second ensemble of 2020 Dem hopefuls will take the stage to discuss policy and grandstand on their personal narratives of oppression. Jews will note, of course, tribe member Senator Bernie Sanders, who, depending on your politics, may remind you of your grandpa, or of an evil version of your grandpa.

But there will also be a Jewish woman on the dais, and a fascinating one at that. Marianne Williamson is a New York Times-bestselling author and activist, whose writing tends towards self-help and non-denominational spirituality, with hints of politics and weight loss. She has great hair, and her activism has actually saved lives. She’s certainly the only candidate whom you can pay $149 for instant access to an online three-day seminar called “The Aphrodite Training: On the Convergence of Woman, Goddess, and Lover.”

1.No food comforts her:

Williamson has written four number-one New York Times best-sellers, founded multiple major charities, and launched a successful bid for the Democratic nomination. So perhaps it is not fair that our favorite fact about her is this — when asked about her “comfort food” on the campaign trail, Williamson responded, darkly, “I have no comfort food.”

Though Williamson refuses to find food comforting (even mac & cheese?) she has used food to comfort millions. Through the non-profit Project Angel Food, which she founded in 1989, she is responsible for an organization that claims to have fed over 11 million sick and homebound people, starting with sufferers at the height of the AIDS crisis. Williamson has reportedly had power struggles with other leaders at the organization, but remains affiliated with it.

Williamson’s team put out a press release of “standardized facts” about the Primary candidate, including, “Not her occupation: Spiritual guru (or any type of guru). Any title that is conferred to a different religious tradition than her own.” It’s true that “guru,” which is used colloquially to connote non-religious woo-woo leaders, belongs originally to Hindu and Buddhist practices. But Williamson, who prefers to be identified as a “best-selling author and activist” is absolutely a guru in the sense that the word is commonly used. Her books — “Age Of Miracles,” “Everyday Grace,” “A Return To Love” — are self-help with an emphasis on spirituality. Her most famous quote is one you’ve likely seen on social media before: “Our deepest fear is not that we are inadequate. Our deepest fear is that we are powerful beyond measure.”

The full quote, from her 1996 book “A Return To Love” goes on: “It is our light, not our darkness that most frightens us. We ask ourselves, Who am I to be brilliant, gorgeous, talented, fabulous? Actually, who are you not to be? You are a child of God. Your playing small does not serve the world. There is nothing enlightened about shrinking so that other people won’t feel insecure around you. We are all meant to shine, as children do. We were born to make manifest the glory of God that is within us. It’s not just in some of us; it’s in everyone. And as we let our own light shine, we unconsciously give other people permission to do the same. As we are liberated from our own fear, our presence automatically liberates others.”

4.She put out a press release stating that she is not Oprah’s best friend:

The Hill described Williamson as a longtime “spiritual counselor to Oprah Winfrey.” If that were true of us, we’d get those words as a forehead tattoo. However, in the same list of “standardized facts,” Williamson’s team wrote, “Also not her occupation: Oprah’s BFF or Oprah’s guru. (Or, any title that rightfully belongs to Gayle King.)” It’s pretty chutzpadik to shun Oprah when you’re campaigning for Americans to trust you, but Williamson is clearly trying to shake off the blanket-scarves-and-incense vibes.

Now, before you judge, remember fellow 2020 hopeful Beto O’Rourke was arrested for drunk driving in 1998, and, by the way, let’s not pretend President Clinton likely spent the 70s in a more honorable way than Williamson. Still! “Bad Boys And Good Dope” sounds like the tantalizing first chapter of a summer murder mystery novel. At another point, Williamson worked as a cabaret singer.

“I am not anti-vaccine,” Williamson said, when confronted with the issue on The View. However, she has also called mandatory vaccinations “draconian and Orwellian.” Williamson didn’t walk back those comments, but she told hosts of the View, “The days of blind faith in Big Pharma are over — the ideas of blind faith in the idea that our government agencies are doing the proper oversight and proper advocacy for the American people against at times the overreach of profit-making industries that are putting money before people — that is not an irrational or unreasonable thing.”

7.Her campaign promises reparations for African-Americans:

Williamson is by far the biggest supporter of reparations based on American slavery among the 2020 crowd. Her policy proposals include $200 to $500 billion, given out over the course of two decades. “I don’t believe that the average American is a racist,” she said, “But I do believe the average American is vastly undereducated about the history of race in the United States,” she continued. “Two-and-a-half centuries of slavery was followed by what we today would call ‘domestic terrorism’…this is not a debt we can afford to delay any longer,” she said, siting reparations Germany has paid to Jewish organizations on behalf of survivors of the Holocaust. “When people want to do things like tax cuts for the very very wealthy,” she argued, “Nobody asks where they’re going to reallocate the money from.”

8.She made an edgy joke about Spanish:

As a few candidates whipped out serviceable Spanish on the debate stage on Wednesday night, Williamson issued this tweet:

I need to learn Spanish by tomorrow night at 9.

It is at once charmingly down-to-earth, and also highlights that Williamson didn’t care to learn the second-most spoken language in the country until it looked like a cool party trick.

9.She used to lead a church, with special guest Steven Tyler:

Though she identifies as Jewish, Williamson served five years as Minister at Detroit’s 2,500 member Christian Church of Today, a non-denominational member of the Association of Unity Churches. Steven Tyler was a recurring musical guest, Los Angeles Magazine reports. She also, clearly, draws on Jewish traditions in her self-help work:

Notably, the song performed above, “Eli, Eli,” was written by Hannah Senesh in 1942, not in ancient times. However, it’s not clear that Williamson endorsed the description of the song as “ancient Hebrew music.”

10.Sarah Silverman and Kim Kardashian endorsed her in the past:

During Williamson’s unsuccessful run for Congress in the 33rd District of California in 2014, she was endorsed by the likes of Silverman, Kardashian, singer Katy Perry, and reality TV star Nicole Richie. In her early days in politics, LA Magazine reports, Williamson was known to refer to herself as “Obama 2.0.” There’s no sign that the same celebrities will endorse her in 2020.

But hey — it’s early, yet. Remember what happened last time? We would be fools to count out a magnetic personality with a cult of personality, a personal industry, and a tendency to mentally compete with Barack Obama.