Hallmark’s Hanukkah Movies Do More Damage Than Good, By Portraying Jews As Outsiders. 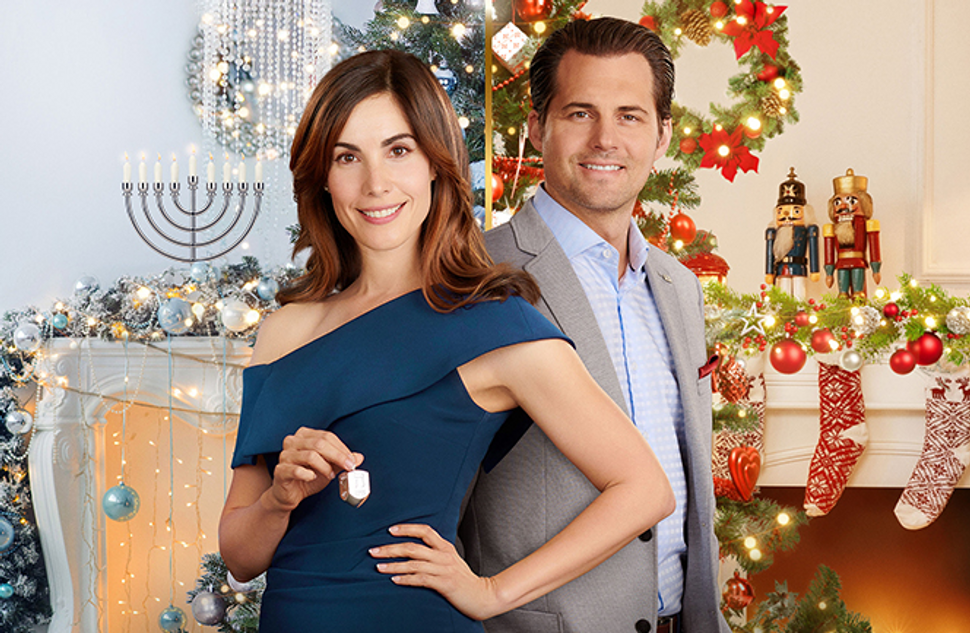 Hallmark’s Double Holiday is one of the first two Hanukkah movies to premiere on the network. Image by Crown Media

The Jewish television viewing public asked for meaningful Hanukkah content. They asked for made-for-TV holiday schmaltz that would allow them to pretend they have a perfect seasonal wardrobe and live in tastefully decorated suburban houses without also pretending that they celebrate Christmas.

Instead, they got two movies about an alternative universe where silly Jews know nothing about Christmas until benevolent Christian hotties teach them to really love it.

However, there are a few delicious moments in these movies that we feel every Jew can enjoy. So that you can now experience the best of the worst without sitting through two hours of elevator music, here are the best in each movie.

The TLDR: Rebecca, an ambitious professional woman (in other words, uptight shrew) has to work with Chris, her personal-space-infringing coworker (in other words, an all-around good guy) to plan a holiday party (in other words, Christmas party) for their firm. This team-of-rivals situation is further complicated by the fact that these excellently-groomed yuppies are competing to please their boss (an unsmiling woman with a buzzcut who says she “can’t handle children”) and snag a promotion. But along the way, Chris meets Rebecca’s family and becomes fascinated with their wacky and outlandish Hanukkah traditions, like lighting candles and playing dreidel. Will Rebecca fall in love fast enough to turn down the promotion like a good woman should? Wait and see.

The Part Where Christians Are Just Way Better At Hanukkah: 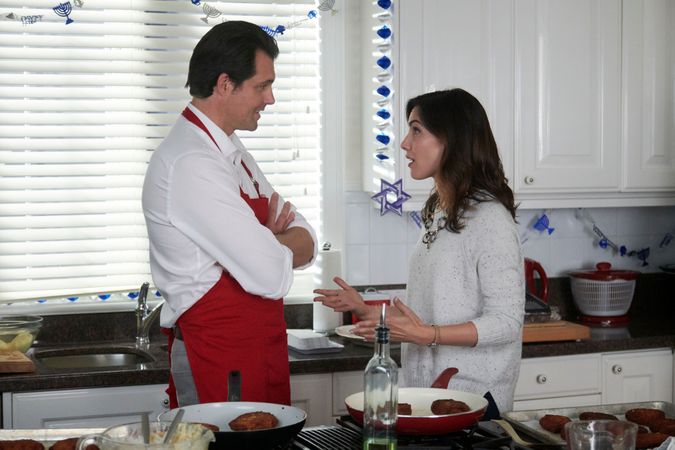 Chris doesn’t know what latkes are, but he can still make them better than Rebecca. Image by Crown Media

Rebecca is a terrible cook (subtext: why is she so obsessed with her career?) so Chris ends up cooking latkes for her family. Later he destroys her in a dreidel tournament, showing that he’s more Jewish than she is and the best way to approach a new culture is to beat everyone at everything.

The Part Where They Say The Prayers Way Too Many Times: 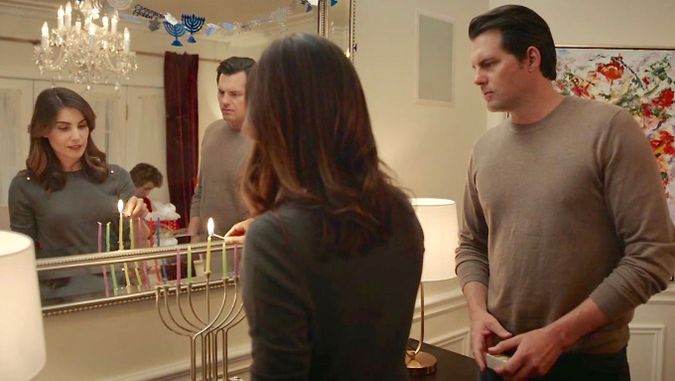 The directors must have needed to fill time, because Double Holiday compensates for the lack of actual Hanukkah content with at least three full-length lightings of the menorah. Chris writes the prayers down and promises to be “off-book” by the end of the holiday, which is hands-down the least realistic part of the movie: Everyone knows that in real interfaith families the dad mouthes along no matter how many Hanukkahs he has celebrated.

The Part With The Holiday Party That Isn’t: 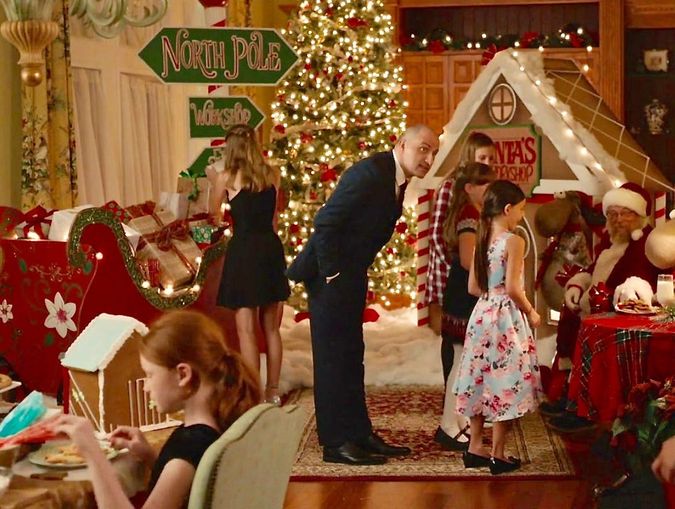 Much like these movies, the holiday party that Chris and Rebecca plan is a Christmas party with Jewish accessories. Killjoy Rebecca tries to ruin everyone’s Christmas spirit with white decorations and slightly-less-denominational cookie cutters, but Chris eventually persuades her that the firm can only communicate its support for “family values” by covering every surface with fake ivy. Once she’s baked three hundred explicitly Christian cookies, he rewards her by lighting a token menorah. And that, ladies and gentlemen, is true interfaith love.

The Part Where The Women Unwrap Chinese Food While Gossiping About The Men In The Other Room: 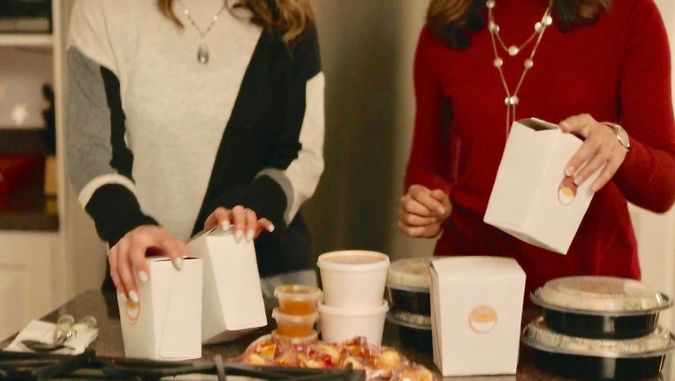 Actually, this part is fine. Someone must have done some real field research for this.

The TLDR: Brooke is an aspiring fashion designer chronically overlooked by her boss (incidentally, also an unmaternal woman with a buzzcut) and dumped by her boyfriend just before Christmas. Joel is an actor struggling to prepare for a movie about rural life, since he’s never left New York or seen a hammer (because he’s Jewish, get it?). In the spirit of field research, Joel agrees to masquerade as Brooke’s boyfriend for the holidays, and spends Christmas with her parents, Walter and Donna, who look like they genuinely think Jews are better with money and might say so in public. As Joel falls for Brooke and her constant, judgmental smile, he starts to feel bad for deceiving her parents. Hijinks and excruciating revelations of Joel’s shockingly non-Christian background ensue, but by the end of the movie Donna overcomes her disappointment when she realizes how many fun Hanukkah decorations you can buy.

The Part With The Deceitful Jews: 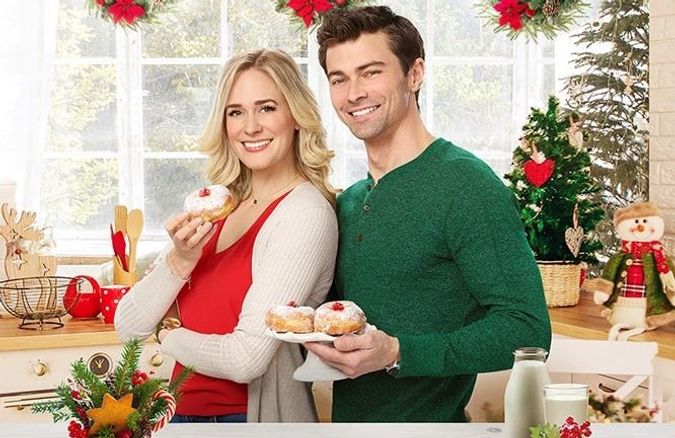 Look at him, wearing a green shirt like he knows what a Christmas tree is. Image by Crown Media

Holiday Date’s plot revolves around a Jew pretending to be something he isn’t in order to bamboozle an innocent white-blonde family who simply want to decorate their five Christmas trees in peace. And he’s not even very good at it: Walter, who greets Joel’s every remark with a loud grunt to signal that he’s the dominant man, keeps complaining that Joel is an “odd duck” and that “something’s not right about him.” Besides positioning Jews as social infiltrators, the movie suggests that they’re so fundamentally “other” that they’ll never be able to succeed in this endeavor.

The Part Where Joel is Clueless About Christmas:

Get you a man who can hang lights like a real Christian. Image by Crown Media

Joel is constantly screwing up Christmas. He buys Brooke’s family a Christmas tree that’s too tall for their McMansion (and no, this is not a comment on class and consumer excess), decorates said tree alone instead of waiting for the family, and guzzles the popcorn that was meant for making ornaments. Besides equating unfamiliarity with Christmas to general stupidity, by portraying Jews as knowing nothing about a holiday that pervades American society, the movie continues to suggest that they aren’t really part of that society.

The Part Where Joel Is Clueless About Everything:

Joel sees a hammer, apparently for the first time. Image by Crown Media

Joel can barely blunder his way through everyday activities, and anything especially small-town or all-American is a mystery to him. Constantly proclaiming himself a “lifelong New Yorker,” fascinated by the spectacle of a hardware store, unable to perform manly tasks like putting up Christmas lights, and given to kissing people on both cheeks, Joel brings to mind words like “moneyed,” “coastal,” or “globalist.” He’s the kind of character you’d come up with if you researched Jews by reading anti-Semitic dog whistles on Twitter.

The Part Where Joel Freaks Out By Admitting Everyone’s Jewish: 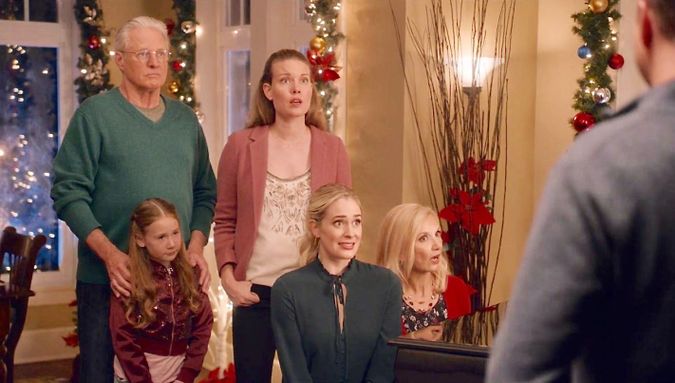 The horror. Image by Crown Media

After accidentally shouting “Mazel Tov!” at a small child and revealing his inability to sing “Deck the Halls”, Joel blurts out that he’s Jewish as if he’s confessing a drug addiction or a sexual attraction to the family pet. The family responds with the barely-suppressed horror of my dad learning about overnight oats for the first time. “He’s Jewish!” is repeated several times, in increasingly shrill tones.

One of the reasons I found the “Double Holiday” and “Holiday Date” films so hilariously appalling is that I’m not used to seeing Jews being so misrepresented on the big screen. We may not have a lot of quality Hanukkah content, but (at the risk of sounding like Walter) Jews are well-represented in Hollywood and many films do tell real and funny stories of Jewish American life.

While these movies are more of a hiccup than a crisis in Jewish representation, they have an even worse problem, one that is widespread across the entertainment industry: The misrepresentation of people of color. Both Rebecca and Brooke have a sidekick of color whose sole aim in life is discussing their love lives. Meanwhile, Chris mentors Kirby, a young black boy with as much personality as the cucumber for which he is named, who only appears onstage when Chris’s good-guy bona fides need some propping up. A diligent search of Hallmark’s Christmas line-up yielded exactly one movie that actually stars people of color.

Next year, I hope Hallmark dredges up an actual Jew to write a better Hanukkah movie. But I also hope they take steps to make “Countdown to Christmas” more representative of the entire viewing public who is watching it.

Hallmark’s Hanukkah Movies Do More Damage Than Good, By Portraying Jews As Outsiders.