Stop comparing my relationship to Kamala’s. Not all interracial marriages are the same. 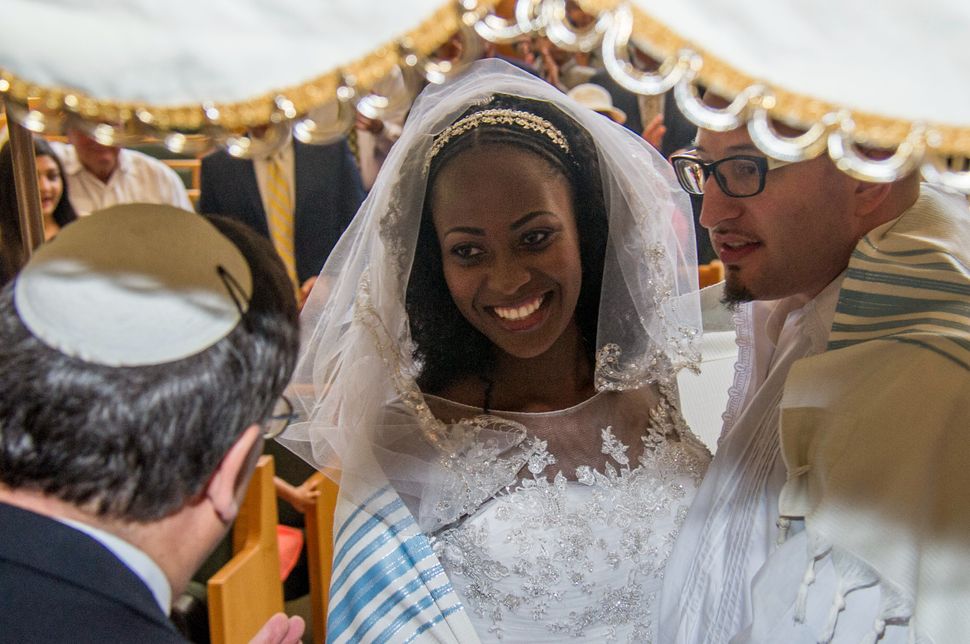 The author at his wedding

Recently, a Jewish writer friend told me I should write about being “a Jewish guy married to a woman of color.” Supposedly, an essay on the topic would be of interest because Vice President-elect Kamala Harris is married to an Ashkenazi gentleman.

I had to disagree. The idea that I am joined to Harris and her husband Douglas Emhoff is actually problematic, for a number of reasons. For starters, suggesting that I, like Emhoff, am a “a Jewish guy married to a woman of color” implies that being Jewish means being defined by a certain color — white — and that a woman of color is the opposite of that. This is of course untrue; there are many Jews of color, and many Black Jews who are erased by this dichotomy.

But there’s a more important reason not to compare my family, or really any interracial family, to that of the veep-elect. And it’s that our story, like Harris and Emhoff’s, is not a type. It is utterly unique.

Granted, the moment Harris’s victory was announced, my wife rushed outside to take pictures in front of the Jamaican flag billowing off our porch. But despite one important thread weaving through my wife and Harris’s backstories, my wife is not Harris and I am not Harris’s husband.

Our marriage is not an intermarriage. My wife Antoinette’s spiritual journey began at St. John’s University, continued through her studies at the State University of New York at Albany and led her to studying in Tzfat. In June 2016, we met under the chuppah. Harris as far as I know has never pursued Judaism.

That means she has not had the experiences Antoinette has had navigating Jewish spaces as a Black woman. Experiences like being on the board of our temple and Jewish day school, yet remembering the days when she was a regular attendee but was still closely watched by a greeter while in the temple corridors as though she was going to shoot the place up.

Harris has not had to navigate being Jewish in Black spaces, either. My wife used to hit up natural hair meetups with a buddy, until that buddy went on about the Jews controlling the slave trade and the Jews lying about who were the original children of Israel.

We’ve had Black friends show up to birthdays and other milestones, yet many were absent at our wedding because it was held in a synagogue. Soon after, my wife and I took my father and his non-Jewish friend out to lunch. Antoinette had to sit through an entire meal as my dad’s friend dropped the n-bomb numerous times, while my father and I fumbled to stand up against the racism. Around the same time, my mom-in-law informed us that her pastor preached to his entire congregation about Jews manipulating elected officials and Jewish landlords bleeding the community.

My wife and I had to struggle through many conversations and silences, working through the wounds of not advocating for one another, and learning to stand up and be there.

The past four years, we’ve watched Trump dash off tweets of Hillary Clinton with a Jewish star beside her face, watched him egg on hate groups and stir up conspiracy theories that would, like always, lead back to one people —the Jews. We felt anger and love for the members of our tribe that bought into his paranoid propaganda. We watched them pitted against other minorities, watched them help turn Israel into a partisan issue, all while Trump stoked the fire for violence against our community.

And through it all, we supported each other, even when it felt like the world was split.

I’m sure Harris and her husband’s relationship has had its struggles, too. I’m sure some of them are similar to ours. But more were very much their own.

I can empathize with the complexities of relationships that cross cultures and hope I am a more caring person because of that. I hope Harris is, too.

The morning after Harris’s victory speech, we feasted on ackee and saltfish while our son did his happy dance. It does matter that Harris also loves rice and peas and knows what Mamaleh means.

But I have no interest in comparing my relationship to anyone else’s relationship just because other people would. It erases our stories, our challenges, our mistakes, our growth, and our successes. It erases who we are.

Jay Deitcher’s writing has appeared in The Washington Post, Tablet, The Cut, and Longreads. He has an MFA from the Stony Brook Creative Writing and Literature program.

Stop comparing my relationship to Kamala’s. Not all interracial marriages are the same.