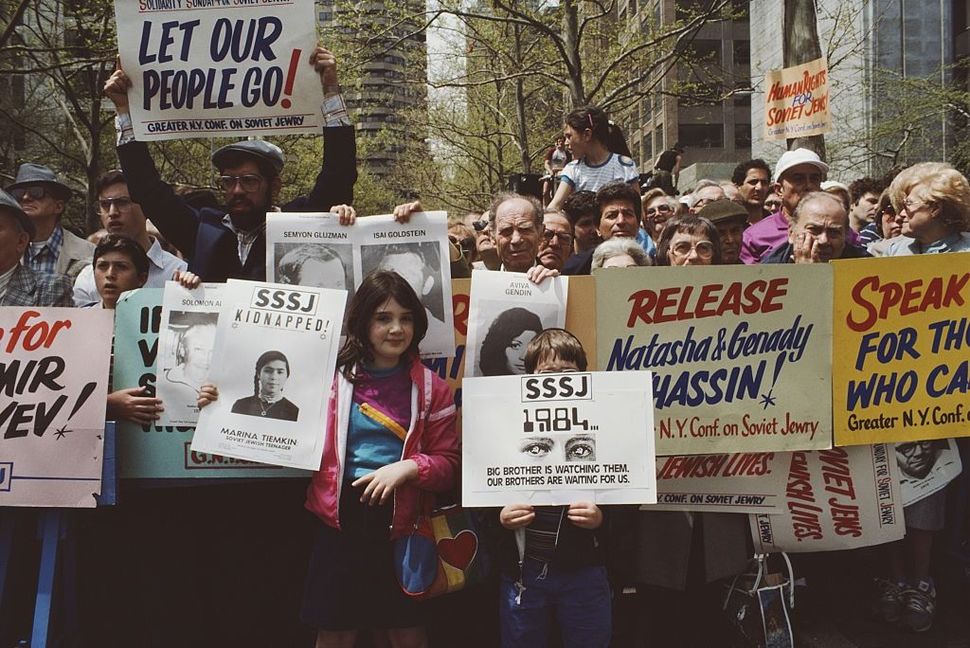 A similar march for Soviet Jewry. Image by Getty Images

This week, 33 years ago, I stood on the National Mall in Washington, D.C. for the first time in my life, amid 250,000 American Jews and allies, listening to the legendary refusenik Natan Sharansky speak. “No missiles and tanks, no camps and prisons can extinguish the candle of freedom,” he told the throngs of people. Everywhere, placards reading “Let my people go!” and “Freedom for Soviet Jews!” waved. Vice President George H. W. Bush spoke. I was overwhelmed by the sights and sounds; I myself was a refusenik who had just come to the United States from the Soviet Union a scant month earlier.

This was the “Freedom Sunday for Soviet Jews” rally. Held on December 6, 1987, on the eve of a summit between President Reagan and Soviet Premier Mikhail Gorbachev, it was — and remains — the largest Jewish gathering ever held in the U.S. Organized by a coalition of American Jewish groups and drawing participants from around the country, the goal was to pressure the Soviet Union to release the so-called refuseniks: Soviet Jews who were prevented from practicing their religion, and denied the right to emigrate to Israel or the United States. I knew their struggle first-hand, because I had lived it.

I was born in the Soviet Union during the Stalin era, before World War II, and grew up during the Cold War. Later in life, I met and married my late husband of 49 years, Pavel, and we lived in Moscow together, where he studied geography and I took up urban studies. As Jews with independent political views, we ran afoul of the state’s policies, and were thus persons of interest. Some years before I made my way to the United States, we came under suspicion from the Soviet authorities.

One day, the KGB conducted a raid on our home in Moscow, searching every inch, top to bottom. They questioned me and searched my purse, looking through my makeup and personal effects. They questioned my daughter, then age 14, demanding she give up information on her schoolmates, her friends, her family. They rifled through her things before they left, confiscating a stack of my husband’s books and papers, and his typewriter. He wasn’t home at the time; he was out looking after the family of another friend of ours who had already been arrested.

Soon, there were guards stationed regularly around our building; we grew to know their faces. Our phone lines were cut, so no one could dial in or out. We were, as we said then, “under KGB care.” My husband was taken in for questioning by the KGB multiple times. They urged him to inform on his family and friends, and he repeatedly refused. His unpredictable disappearances finally stopped after he signed a written statement saying he would never inform.

We wanted out. In 1982, my family applied to the government to emigrate, but our application was refused and we were permanently denied the right to re-apply. We were officially refuseniks. We knew the stories of others, like Sharansky, who suffered for years under this form of purgatory, and who became a symbol of our movement after being sent to the Gulag and put in solitary confinement on trumped up charges. We were sure that the international Jewish community would ignore our plight if we went quietly, but we thought we might have a chance at raising support if we raised our voices. So we decided to fight back.

We set about demonstrating against the conditions under which we were being forced to live, prisoners in our own country. We began holding hunger strikes to voice our opposition and build support, both locally and abroad. We got together with other refuseniks and held public demonstrations on the streets of Moscow to state our case. Usually, we women made up the bulk of these demonstrations; the authorities were less likely to beat women as badly as they beat the men. We kept up the pressure, encouraged by the example of Sharansky and others, and were determined to make ourselves heard.

Gradually, the international community began to hear our cries. Both street-level movements like ours as well as figures of international renown like Sharanksy and Yosef Mendelevitch — another prominent refusenik who also spoke at the Freedom Sunday rally — helped build momentum toward a robust international movement to liberate Soviet Jewry. The American-Jewish community and others began publicizing the names of refuseniks they demanded be freed, putting international pressure on the Soviets, and secret dispatches from Voice of America and Radio Free Europe informed us that our pressure campaign was working.

After five years of wrangling with bureaucrats, demonstrating, filling out paperwork, and endlessly waiting, my family and I were granted the right to emigrate to the United States. It had taken five years. We packed our things and headed for our new home, arriving by way of Boston in November of 1987. We quickly linked up with some other refuseniks we had known who had arrived in America before us, and we began hearing word of a rally in Washington. We resolved that one of our first acts on American soil would be to attend it.

Seeing Sharansky, Mendelevitch, the Vice President of the United States and so many others speak was a surreal and deeply moving experience. What had mere months earlier seemed like an impossible dream was now a reality, and here we were — a quarter of a million strong — celebrating the victories of those of us who had been lucky enough to emigrate, even as we resolved to continue fighting for those still left behind. As Sharansky said from the stage that day, “It is our struggle which can make the Soviet Union willing to open the gates.”

Since that day, I have remained in my adoptive home of Washington, D.C. In 2003, I opened the Shalom School in Rockville, Maryland, which educates the children and grandchildren of Russian-Jewish emigres. We started with just a few dozen pupils in our opening semester, including my own grandchildren, and have operated continuously since then, with ever-growing participation from the local Russian-Jewish community and, since 2009, with funding from Genesis Philanthropy Group, which supports programs like ours worldwide. For a generation of children of Russian-Jewish emigres who may feel estranged from their Jewish heritage and culture, the school offers vital support.

On December 6 of each year — the anniversary of the Freedom Sunday rally — I reflect back on what it means for these students to be able to live freely as Americans, as Russian emigres and as Jews. And I reflect on all the sacrifice it took, from refuseniks like myself and others, to make it all possible.

Ella Kagan is a former refusenik and founder of the Shalom School in Rockville, MD, which she still helps lead today.