Poland is planning a Museum of the Warsaw Ghetto. As sons of survivors, we object. 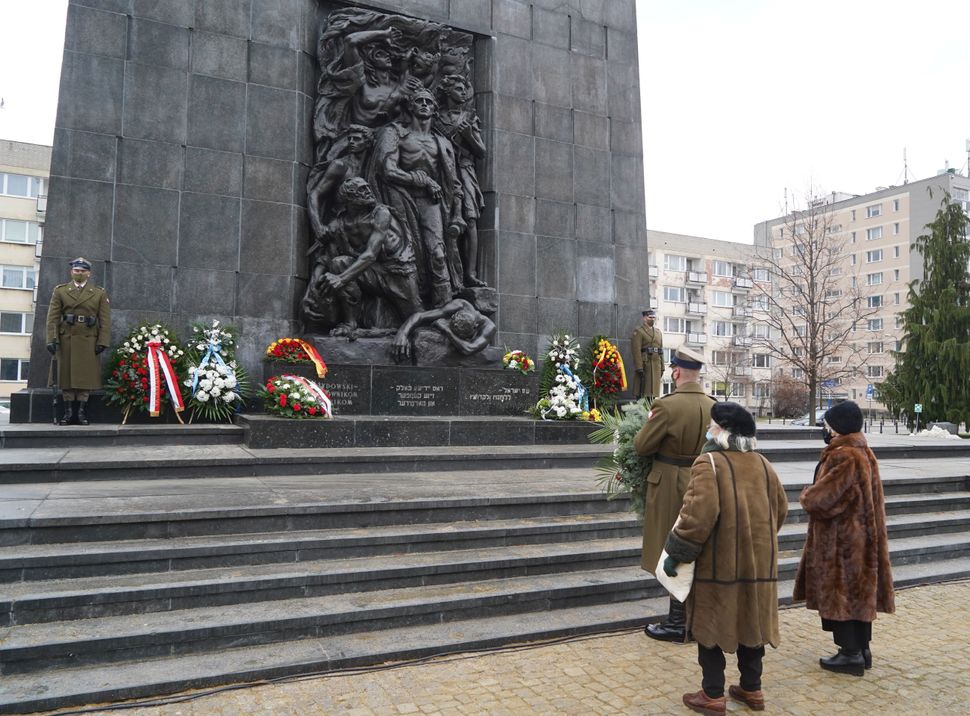 Representatives of the Polish Association of the Righteous Among the Nations pay tribute in front of a monument dedicated to the victims of the 1943 Warsaw Ghetto Uprising. By JANEK SKARZYNSKI/Getty Images

On this Holocaust Remembrance Day, we, sons and grandsons of survivors, write to protest the falsification of history being perpetrated in our name at the projected Museum of the Warsaw Ghetto, due to open in 2023 for the 80th anniversary of the Warsaw Ghetto Uprising.

The Museum’s published mission is “To disseminate knowledge about the life, struggle and extermination of the Jews in the Warsaw Ghetto and in other ghettos in German-occupied Poland.” But the museum proposes simply to abandon the true story of the ghetto in midstream.

The survivors know the story as they lived it; we, their children and grandchildren, as we heard it from them; historians, as they have documented it. But those in charge of the museum know it only from the outside, through the prism of Polish political agendas.

That history — the history of many of our parents and grandparents — remains almost completely unknown. The eminent Jewish historian Emmanuel Ringelblum, one of the heroes of the ghetto, famously made it his mission to save what could be saved and led a group that strenuously documented the life of the ghetto. The milk cans and tin boxes in which they buried the records they assembled are on display at the U.S. Holocaust Memorial Museum.

What has been forgotten is that the surviving members of Ringelblum’s group, alongside the surviving ghetto fighters, activists of the Jewish National Committee and the Bund continued their activity after the ghetto’s destruction, risking their lives. After the war, fearing controversy, they did not speak of their record-keeping activity, and their records were quietly deposited in archives in Israel and Poland, where they lay, untouched and unknown, for 50 years.

Even today, few people know that such records exist. Most if not all public knowledge of the community whose history they chronicled — even awareness that it existed — was lost. Meanwhile, false narratives filled the void. The Polish government publicized the Polish people’s efforts to help Jews. Jewish historians acknowledged such efforts with gratitude, but argued that they were the work of a small minority, and that the majority of Poles were either hostile to the Jews, or at best indifferent to their fate. And so began a polarized controversy that continues to this day.

Plans for the Museum of the Warsaw Ghetto continue that controversy. They were drawn up without the advice and consent of the descendants of survivors. They are the work of by Polish so-called “experts,” who have treated us with indifference, if not outright contempt. Objections have been ignored and repeated requests for details have gone unanswered. In a further insult, the museum will be housed in the building of the Behrmans’ and Baumans’ Children’s Hospital, an important memorial and heritage site in the very heart of the Warsaw ghetto.

It is time to take a stand. Never again must decisions about how our story is told be made by people who ignore our crucial stake in our own history. We call on the Jewish community to stand with us, as the Jews of Warsaw stood, united in a common cause, those many years ago.

Gunnar S. Paulsson is the son of Auschwitz survivors and grandson of Warsaw survivors. He is the author of “Secret City: The Hidden Jews of Warsaw 1940-1945” (Yale University Press, 2002), which won the Fraenkel Prize in Contemporary History. Michael Dobkowski is a professor of Religious Studies at Hobart and William Smith Colleges. He is the son of survivors from Baranowice who fought as partisans. Samson Munn is a professor at UCLA School of Medicine and the son of two Auschwitz survivors.

Poland is planning a Museum of the Warsaw Ghetto. As sons of survivors, we object.