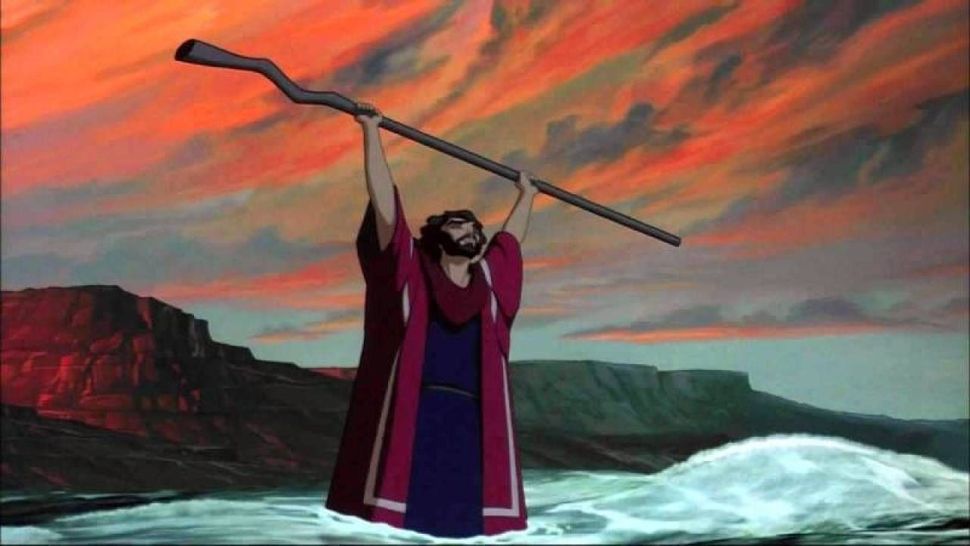 Moses shortly before the parting of the Red Sea in the animated classic “Prince of Egypt.” Courtesy of Dreamworks

This piece was originally published in the J. of Northern California.

With Passover just around the corner, beginning on March 27, Jews around the world are preparing to participate in a ritual retelling both of our suffering as an oppressed people and of our miraculous redemption from the suffering of Mitzrayim, Hebrew for ancient Egypt.

Each year, we relate to this past experience through the prism of our ongoing sense of the paradox of American Jewish life — we are seen as part of the larger, privileged majority while knowing that we are a diverse community which is still, and in fact increasingly, a target of hatred and antisemitism.

The Unite the Right rally in Charlottesville, at which white supremacists protested the proposed removal of a statue of Robert E. Lee, included not just words of hatred spewed against people of color, but the antisemitic chant “Jews will not replace us!” That 2017 rally brought out in public for all to see the (sometimes subliminal) oppressive elements of the American consciousness that, despite the efforts of so many, have not been eradicated.

For us, as for others, as long as there is ethnic hatred — and leaders claiming that there are “very fine people on both sides” and that the wildfires in California were caused by Jewish space lasers — then true redemption from our contemporary Mitzrayim has not yet come. This is especially true when such hatred results in vandalism, assault and mass shootings, most recently at the Chabad of Poway synagogue in 2019.

It is for this reason that we support the creation of an Ethnic Studies Model Curriculum that seeks to share the story of a wider, diverse American experience that is inclusive of the stories of so many of us who feel that we have been left out, though we are an essential part of the fabric of American life.

Now, in a time when extremism has reared its ugly head in this country, the manifold beauty of the American experience needs to be celebrated through varied stories.

At Passover, we are taught to zachor — remember the Exodus from Egypt that we might have both empathy for those who are oppressed and courage to stand up against injustice and hatred.

In the remembrance and retelling of our stories, we may help each other see that we can achieve America the Beautiful only when we appreciate how each person and ethnic group is a true reflection of the Divine.

Unfortunately, the first version of California’s model curriculum left out the Jewish story. It ignored the Jewish experience as an oppressed minority. When it did talk about Jews, it engaged in the politicized questions around Israel and Zionism and the boycott, divestment and sanctions movement, as if that is the sum total of our ethnic being.

It was silent not just about antisemitism but about Jewish diversity, about Jews of color and of Middle Eastern origin, and about Jewish contributions to the development of our great state.

To blot out our existence is to deny the reality that antisemitism is real, and that education is an essential way to combat it.

It also blots out the understanding that Jews are not just a religious community, but an ethnicity. Let us not forget that in Russia, as in Nazi Germany, the word “Jew” was stamped on our identity cards, and that here in America, the land of the free, Jews once were denied access to universities, restricted from neighborhoods, not allowed to participate in numerous professions, relegated to different social groups and had to create our own hospitals. Like our Latinx neighbors today, Jewish immigration was limited even as our lives as refugees were at risk.

The new version of California’s Ethnic Studies Model Curriculum succeeds in righting this wrong by telling an important part of our story, along with so many other stories that for too long have not been told.

There has even been the addition of a sample lesson reflecting the diversity of Jewish Americans. This crucial inclusion presents the chance to communicate the richness of our multicultural, multiracial, multidenominational people. Importantly, there is now a meaningful definition of antisemitism, and all derogatory language about Jews, Israelis and Israel has been expunged.

We hope that the state will embrace it (the state Board of Education must approve a final version of the curriculum by the end of March) and begin to correct the wrong of an educational silence that has left so many out of the story, though they and we were and are essential to the history of this state.

In addition, we know that other states will look to California in developing similar educational tools for their own diverse populations, so it’s important to get it right. We need to better understand one another, and this model curriculum is one step along the way of helping true redemption to come.

Rabbi Beth Singer is the co-senior rabbi of Congregation Emanu-El in San Francisco.

Rabbi Jonathan Singer is the co-senior rabbi of Congregation Emanu-El in San Francisco.