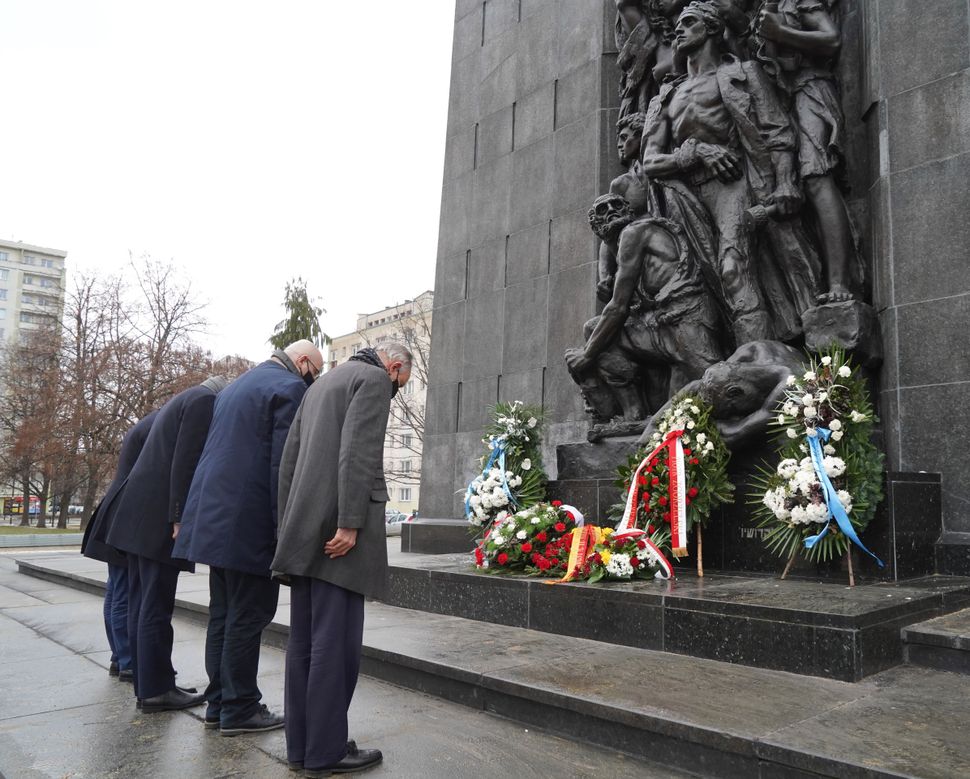 Members of the Polish Parliament pay tribute in front of the Monument to the Ghetto Heroes dedicated to the victims of the 1943 Warsaw Ghetto Uprising in Warsaw, on January 27, 2021. By JANEK SKARZYNSKI/Getty Images

April 19, 2021, is the 78th anniversary of the Warsaw Ghetto Uprising, and a good time to take aim at the myth that Jews went “like sheep to the slaughter.” Warsaw stands alongside Auschwitz as a symbol of the Holocaust: As Auscwhitz is an eternal condemnation of the perpetrators and all they stood for, so Warsaw is a symbol of Jewish struggle and resistance.

That struggle was not confined to the ghetto, nor to Warsaw, nor even to Poland, and it did not end with the uprising.

All strands of Jewish life came together to survive in Warsaw. Jews came from all over Poland, seeking shelter. And two Jewish organizations were active in linking the Jewish resistance in Warsaw with the broader landscape of resistance to the Nazis: The Jewish National Committee (JNC), an umbrella groups for the Zionist parties, chaired by Adolf Berman, and the Bund, chaired by Leon Feiner.

Besides negotiating with the Polish underground for support for the ghetto fighters, the two groups carried the main burden of the organized aid effort, usually identified with the Polish organization Żegota. Between them, funded entirely by money raised by Jewish organizations abroad, they reached twice as many people as Żegota. And even Żegota itself was structured around Jewish resistance: the largest single cell was headed by Maurycy Herling-Grudziński, a convert, but still Jewish in the eyes of the Nazis. Herling-Grudziński sheltered 494 Jews on his estate in suburban Warsaw, supported at least in part by the JNC.

The courageous activists of the JNC and the Bund kept extensive records to document the life of this underground Jewish community, risking thousands of lives, including their own, because they understood the historical importance of their work. The historian Emmanuel Ringelblum hid in an underground bunker in “Aryan” Warsaw — overcrowded, stinking with sweat and feces — in which he wrote three books in the 10 months before the bunker was discovered and all its inhabitants were murdered. He also managed to correspond with Berman, as well as with colleagues in London and New York, and stayed well-informed of events in the wider world.

After the war, the survivors of Warsaw’s extraordinary underground community became the nucleus of efforts to reunite the shattered fragments of Polish Jewry. They also recorded survivor accounts, collected memoirs and gathered extensive documents, now on file at the Jewish Historical Institute in Warsaw.

It was a magnificent example of the traditions of self-reliance and communal solidarity that have held us together as a people, through all adversity, despite dispersion and often bitter division.

When we think of Masada, do we think of the Romans? Of course not. All too often, we focus on the terrible things that were done to us by others, while losing sight of our own history. On this day, we celebrate the heroism of the Ghetto fighters, of course; but let us also remember Ringelblum’s solemn dedication, the courage of the Jewish activists and the quiet heroism of the thousands of ordinary Jews who kept up the struggle to ensure that the history and heritage of their community would be preserved for the ages.

Dr. Gunnar S. Paulsson is the author of “Secret City: The Hidden Jews of Warsaw 1940-1945” and served as Senior Historian at the Imperial War Museum in London. The son and grandson of survivors, he has been active as a Holocaust historian for 35 years and professionally since 1994.