We are all mourners on Tisha B’Av 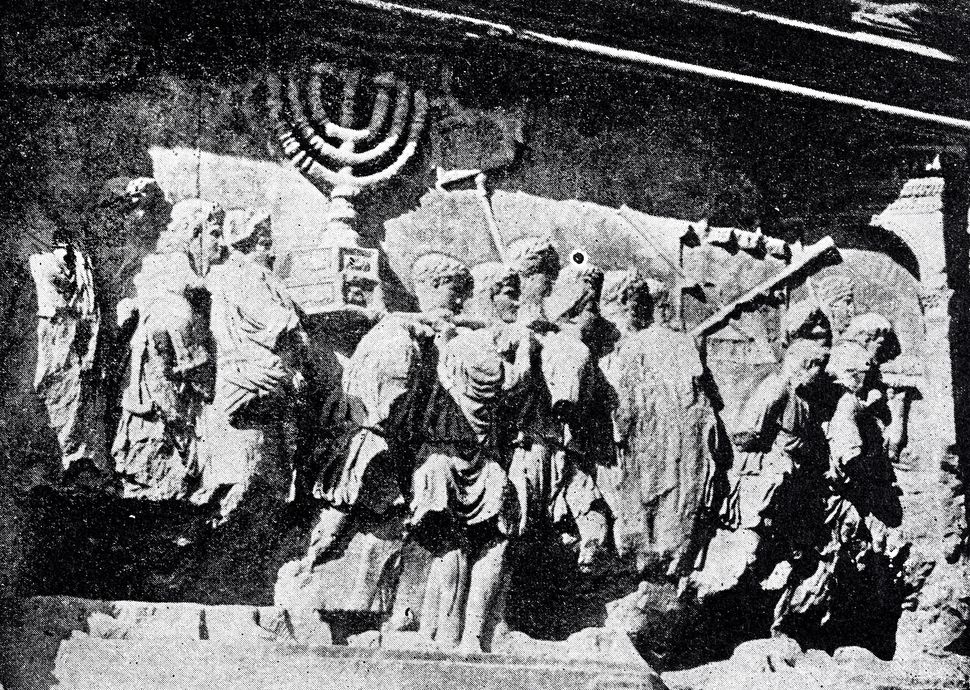 Arch of Titus with a relief of the “spoils of Jerusalem.” By iStock

Collectively, we are in the period known as the “nine days,” a time of mourning leading up to Tisha B’Av, the day on which, according to tradition, both the First and Second Temples were destroyed.

Personally, I am observing shiva for my father-in-law, Henry Hantgan, who passed away on July 8th. I am grateful to Henry for so many things including his warmth, his humor and the many kindnesses he showered on me over the years. He was a wonderful grandfather to our daughters and I am most thankful to him for partnering with my mother-in-law Beverly to bring Jacqueline into the world and to raise her to be a tzadeket (righteous person).

It’s a tradition to study texts in honor and memory of the deceased. Moed Katan, a section of the Talmud that deals with the laws of mourning, includes an important lesson about the morality of grief:

“At first the wealthy would take the deceased out for burial on a dargash (a fancy stretcher made of leather) and the poor would take the deceased out on a plain bier made from poles that were strapped together. The families of the poor were embarrassed by this. The Sages instituted that everyone should be taken out for burial on a plain bier, in order not to humiliate the poor.” -Babylonian Talmud, Moed Katan, 27a-27b.

The custom to this day is to bury every Jew in a simple, modest fashion. The same fate awaits us all, rich and poor alike. The Rabbis of the Talmud valued human dignity so highly that they worried even about embarrassing the dead (and their kin).

In our teachings, rituals and customs are embedded values. Even in something as seemingly mundane as the type of stretcher used to transport a corpse or the type of coffin we use for burial, we see how our tradition teaches us to be caring, menschlikh people. The lesson is clear: every member of our community has inherent kavod, inherent dignity, no matter their wealth, status, or station.

The rabbis taught that the Second Temple was destroyed because of sinat chinam — senseless hatred. People were unkind and disrespectful to one another for no reason. (There aren’t so many good reasons I can think of to be unkind to another by the way – perhaps when others behave in a manner that is particularly obnoxious, amoral and worthy of censure, they then warrant being treated coldly and without honor.)

A root cause of sinat chinam is a lack of kavod — respect— for the other, particularly when it is combined with not truly knowing one another. When there are divisions of class or race or ethnicity so deep that we become separated and isolated from one another, it becomes harder and harder to recognize the inherent dignity that each one of us is graced with. When we come to know each other more deeply, we naturally endeavor not to hurt the dignity of the other in our words or actions. When we know, for example, that a friend has recently gone through something traumatic like a divorce, we are more careful with our words in a conversation discussing something that might touch on a related issue. A key to kavod for the other is curiosity, a desire to know the other’s story, his dreams and aspirations, what fills him with hope and what fills him with dread.

Ultimately, the type of stretcher used to transport the dead to their final resting place is a trivial matter. In the grand scheme of the universe, what possible difference could it make if my family uses a leather bier and yours uses one made of simple wood?

The value embedded in the discussion however is precious and of ultimate importance. Especially at a moment of vulnerability and emotional trauma, we need to take extra care not to wound the kavod of the dead or of those who mourn them. In such a time, we need to be especially sensitive and tender.

This Sunday marks a time of collective mourning for the Jewish People — Tisha B’Av. Globally, despite the progress being made because of vaccines and mask-wearing that has allowed us to gradually emerge from the isolation of the pandemic, we continue to mourn profound losses. Millions have died, many more have lost their jobs or their businesses, fallen behind in school, or suffered trauma due to anxiety or depression.

As we continue to mourn, let’s remember to take special care to treat each other – those close to us as well as strangers – with an added measure of kavod. Instead of defaulting to sinat chinam, now is a time for ahavat chinam, a time to be especially loving.

We are all mourners. Let’s treat one another — now especially — with tenderness, sensitivity and love.

We are all mourners on Tisha B’Av