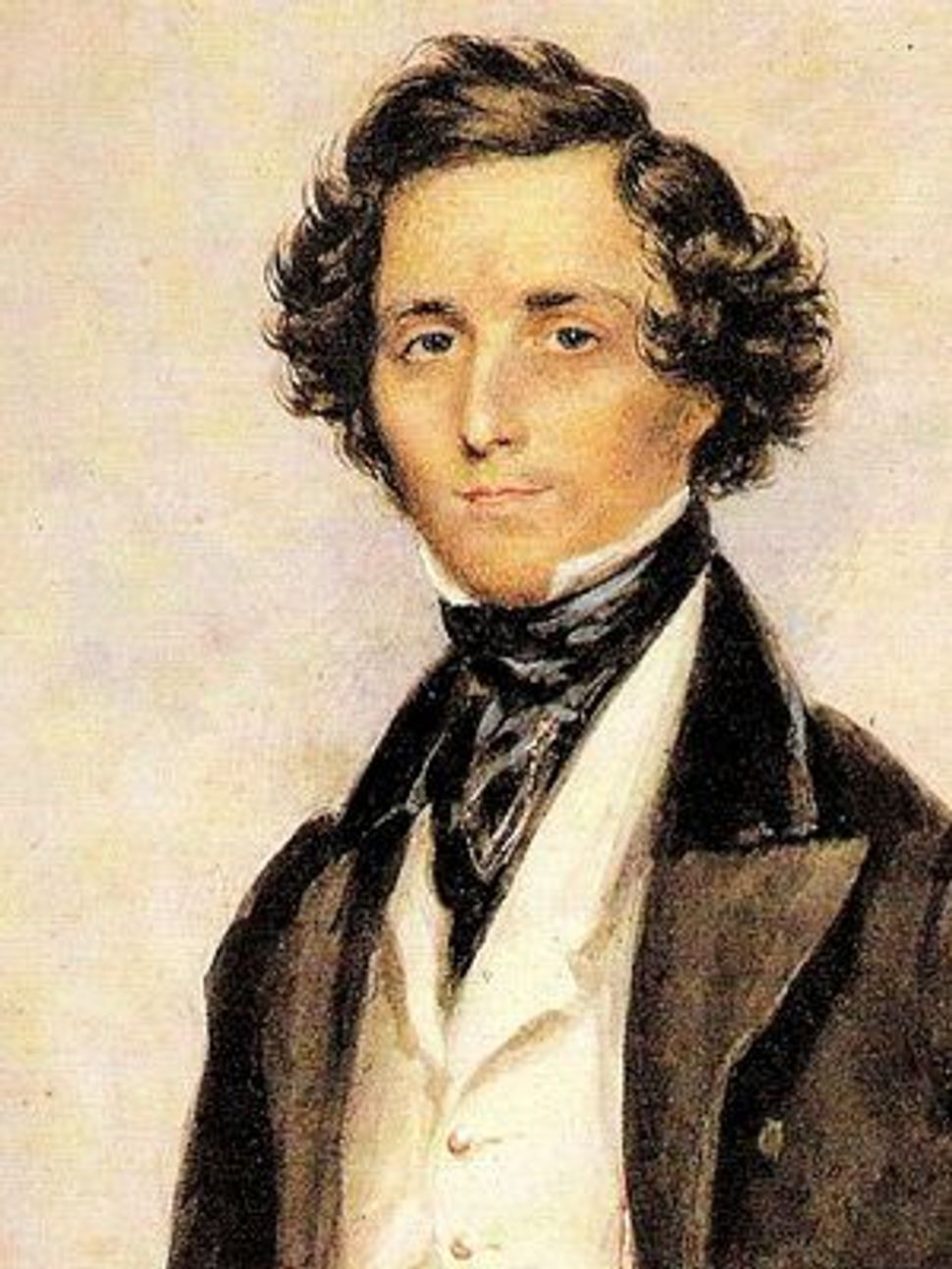 Felix Mendelssohn was still alive when the New York Philharmonic was founded in 1842. “He most certainly influenced our orchestra from its inception,” Philharmonic archivist Barbara Haws told the Forward. “Our very first program featured Mendelssohn. In fact, before his death in 1848, a total of six Mendelssohn works were performed in our first 14 concerts. And we gave the U.S. premieres of most of Mendelssohn’s works, like the Violin Concerto.” 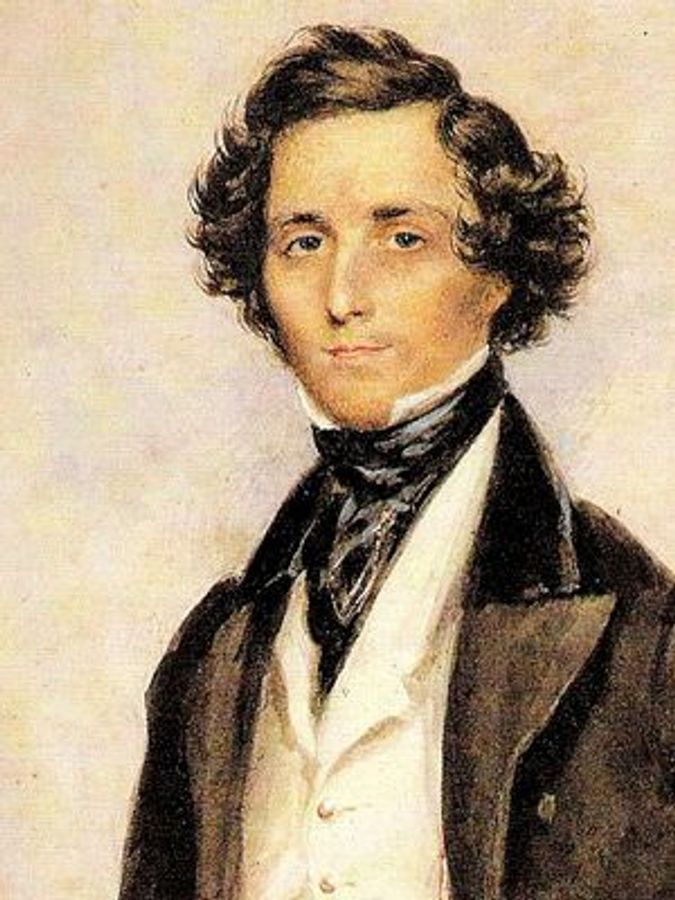 The orchestra’s founder, Ureli Hill, played under Mendelssohn’s baton in Germany, “and there is much correspondence between the two. Mendelssohn even expressed interest in Hill’s proposal to compose a new work ‘on American themes’ for the new orchestra,” Haws explained. But Mendelssohn’s untimely death left that task to be picked up half a century later by Dvořák.

So for their 14,766th, 14,767th, 14,768th and 14,769th concerts, which happened to fall on the week of bicentenary of Mendelssohn’s birth, Philharmonic’s former music director Kurt Masur returned to conduct a special all-Mendelssohn program. There is something special that happens when this orchestra and this conductor perform this composer’s music. Having been a longtime music director of the orchestra Mendelssohn founded, the Leipzig Gewandhaus Orchestra, Masur knows this composer’s music as profoundly as anyone ever has.

“My teacher told me to close the window when I practiced it on the piano. This was already in the Nazi time,” Masur said when the Forward asked him when he had first become acquainted with the music of Mendelssohn. “I was 12. You know, for a child, it’s exciting when something is forbidden,” the conductor recalled. “After the war, no one in the younger generation knew how to perform Mendelssohn. Or Mahler. Everyone had to learn from the beginning. They played it as if it were Brahms, which is all wrong. It should not be done in a ‘sweet’ way. It is classical. It should be played like Beethoven. His ‘Elijah’ has the same dramatic point as [Beethoven’s] ‘Missa Solemnis.’”

For Masur, there is no Mendelssohn style; each work is a different sound world: “Think of them: Italian Symphony, “Midsummer Night’s Dream,” the Violin Concerto — they all have a completely different conception of sound. You have to be able to find the musical language for each subject. He never composed only for effect. Each individual work has a deep philosophy, which you need to understand to perform it properly.”
Still, Masur explained, he has learned that there are certain lessons all the works share. For example, the singularly chiaroscuro quality of the brass. “Such fantastic trombone writing in Mendelssohn!” he said. “But it needs to be mellow and singing — not bright.”

The first of the three works on the program was an overture, written on request, to Victor Hugo’s “Ruy Blas,” a play romanticizing suicidal revenge, which Mendelssohn found “beneath contempt.” The composition he produced, however, was stunning in its execution, clarity and dramatic concision. One can easily imagine the effect this work had on Giuseppe Verdi, who obviously copied so many of its details in his own opera overtures.
Near the end of his life, Joseph Joachim, one of the most important violinists in history (who happened to be Jewish), said: “The Germans have four violin concertos. The greatest, most uncompromising is Beethoven’s. The one by Brahms vies with it in seriousness. The richest, the most seductive, was written by Max Bruch. But the most inward, the heart’s jewel, is Mendelssohn’s.”

Joachim would know: He was personally responsible for the success of all four of these concertos. Anne-Sophie Mutter brought remarkable focus and fire to this “heart’s jewel,” daringly slowing the tempo significantly for the second subject of the first movement, which turned the “tranquillo” section into a searching, internal monologue. The wide tempo changes may have violated Masur’s classical strictures, but who could resist such brilliant, ardent, intensely felt playing?

But the most remarkable work was the last: a large-scale rarity, the quasi-oratorio “Die Erste Walpurgisnacht,” set to a deeply strange poem by Goethe. AT 73, the poet struck up a profound friendship with 13-year-old Mendelssohn. When Mendelssohn was 18, they lived together for a month. “Walpurgisnacht” decries evil Christians who persecute Druids, making the pagans the heroes. The final words are, “And even if they rob us of our ancient ritual,/Who can take your light from us?” There is no mistaking Mendelssohn’s intentions, as he has the chorus repeat that non-Christian last line as the finale of the work: “Dein Licht, wer kann es rauben?”

A fellow composer whose music could have come from a different universe, Hector Berlioz, one of the finest orchestrators in history and a demanding critic of others, voiced astonishment at Mendelssohn’s “impeccable clarity, notwithstanding its complexity. Voices and instruments are completely integrated, running in opposite directions, even colliding, with an apparent disorder that is the perfection of art.”

In Mendelssohn’s scores, the seemingly effortless clarity and balance achieved repeatedly belie the amount of work behind them. Most composers come from modest economic backgrounds, their lives filled with struggles for opportunities and recognition. Mendelssohn was an exception: Born to great wealth, he could easily have chosen to live a comfortable existence as a dilettante, living off his family’s income. Instead, he worked incessantly. As a child he was given an orchestra to play with. He not only made the most of it, but also went into overdrive, often creating multiple versions of the same work, sets of related works and multiple drafts, always testing for ways to improve his ideas. “Keep working! Always working!” was Felix Mendelssohn’s mantra for everyone, especially himself.

When another prodigy, Eduard Franck — like Mendelssohn, he was from a Jewish banking family that had converted to Christianity — was introduced to him, he brought the boy into his household to mentor his development as a composer. But after a year, and great progress, rather than keep him on as a student, Mendelssohn pushed him to go out on his own so that he would become more than just an imitator of his mentor. And when Franck dedicated his first published work to his teacher and friend, Mendelssohn wrote back, “Keep working!” the Berkshires-based series “Close Encounters With Music” is using the Mendelssohn bicentennial to reintroduce Franck’s work in a tour of chamber music of by both of them. The two composers assert that although Franck went on to a long, productive career, his admirable works suffered the same fate of antisemitic suppression as Mendelssohn’s.

During the interview, Masur was at pains to stress Mendelssohn’s visionary attitude toward education, citing the composer’s establishment of the Leipzig Conservatory of Music. “He saw it not just as an institution of learning, but as a family,” he said. “Eighty-five percent of the Gewandhaus Orchestra came from the conservatory! The orchestra and the conservatory were for him the same thing. Nothing like that existed before.”

The Leipzig Conservatory has been renamed in honor of its founder, the Mendelssohn Conservatory. And Masur is heavily involved in the International Mendelssohn Foundation, which at present is working to restore the composer’s house on Goldschmidt Street in Leipzig.

And a related possible scandal only recently brought to light, if true, might demonstrate that Mendelssohn’s early death — from strokes, long attributed to habitual overwork — may have been brought on by an emotional crisis perhaps involving the United States: singer Jenny Lind’s refusal of his proposal that they abandon their respective spouses and run off together to America. At this point, this story is entirely conjectural. But it involves a letter by Otto Goldschmidt, Lind’s husband that is in the possession of London’s Royal Academy of Music and still suppressed even after the century of embargo passed in 1996. After the composer’s death, Lind did set up a scholarship fund in Mendelssohn’s name, which is administered by the R.A.M. and is the reason the academy holds the letter. For details, see this article in the Independent.

Mendelssohn’s immortality is as secure as any composer’s could be. When the New York Philharmonic recently ventured to North Korea and the musicians there sought to work together with the Americans, which music did they select for this once-in-a-lifetime opportunity? Felix Mendelssohn’s.

This piece is the second piece in a two-part series commemorating the bicentenary of Mendelssohn’s birth. To read part one on the composer’s various achievements, click here.

Raphael Mostel is a composer based in New York City. He writes frequently on the arts, and teaches the seminar “Architectonics of Music” at Columbia University Graduate School of Architecture, Planning and Preservation.