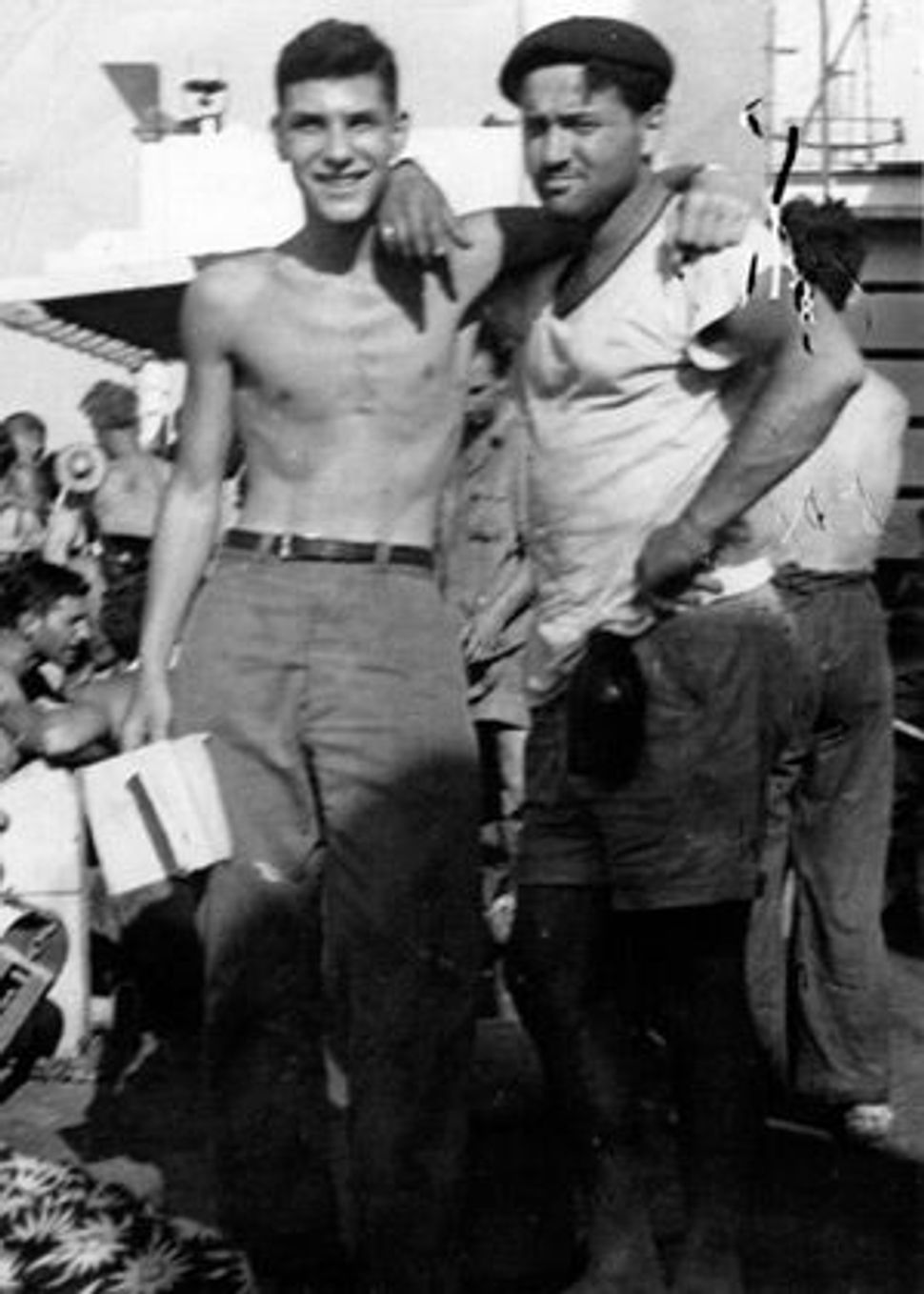 Young, American and About to Save Israel: Aboard the Pan York, early August 1948, shipmates of Jack Kesselman ? Ralph Lowenstein, 18 (left), of Danville, Va., and Frank Perlman, 27, of Pittsburgh. Image by Courtesy of Frank Perlman

My father arrived in Marseilles in late July 1948, as a lace salesman from Belgium. Gloria Kessler, a nurse working at a hospital in Chicago, had decided to give up her career to smuggle herself into Palestine to help. She, too, received falsified documents from Teddy Kollek at the Hotel Fourteen and remembers sailing with my father to Marseilles from New York. Once they arrived in France, my father met three more American volunteers: Frank Perlman, Jack Shulman and Ralph Lowenstein. 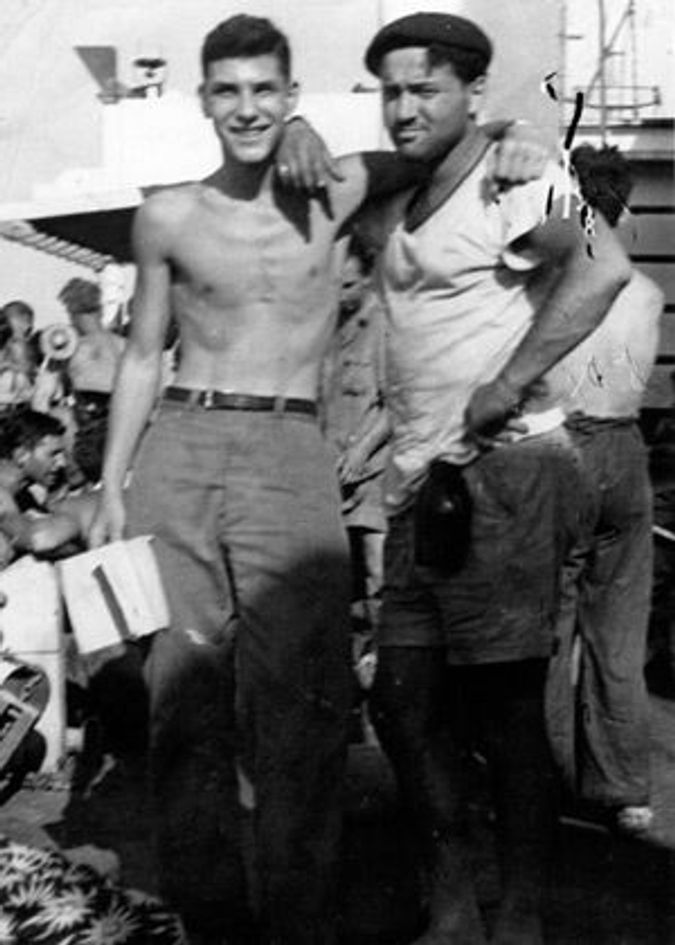 Young, American and About to Save Israel: Aboard the Pan York, early August 1948, shipmates of Jack Kesselman ? Ralph Lowenstein, 18 (left), of Danville, Va., and Frank Perlman, 27, of Pittsburgh. Image by Courtesy of Frank Perlman

Lowenstein I knew originally from the only photograph I had of my father from this period, and he was the first person I tracked down. Today, he is dean emeritus of the College of Journalism and Communications at the University of Florida, heads the American Veterans of Israel in Florida and helped to build the only museum in the world dedicated to Machal. He has also written a book about his time in the war, “Bring My Sons From Far: A Novel of the Israeli War,” later republished in paperback as “A Time of War.”

Upon arrival in Marseilles, my father, Lowenstein, Kessler and the rest of the American volunteers slept in a camp alongside Holocaust survivors: The displaced persons, newly rescued from the camps, still lived in a state of heightened anxiety and fear. They were yet to feel “free.” Lowenstein recalls that since these men and women had just escaped the nightmare of the camps, where they were forced to “live like animals,” a fight would invariably break out every time food was rationed out. The DPs, afraid that every meal might be their last, would hide bread under their mattresses.

After three weeks in Marseilles, during the second week of August 1948, my father, Lowenstein, Kessler and the 25 American Machalniks boarded the Pan York, a dilapidated Panamanian boat originally built to ship bananas. For carrying passengers, the ship was rebuilt with three floors in each of its three holds.

On the Pan York’s first voyage from Bulgaria, it carried 7,500 people. On that voyage, the ship was captured by the British. The passengers were interned in a camp in Cyprus until Israeli independence was declared on May 15.

Paul Kaye, whom I wrote about in the last installment, was a crew member of another Aliyah Bet ship, the Hatikvah. He also experienced capture and internment in Cyprus; however, Kaye eventually escaped, along with the crew of the Hatikvah, and continued his mission. The incredible story of his escape is featured in the documentary “Waves of Freedom,” which the Forward and the JCC in Manhattan will be screening in May. Kaye recalls the first time his crew picked up DPs. Coming onto the ship, each survivor hugged him and thanked him in Yiddish. He recollects the profound feeling that he was rescuing not just victims, but also family members whom he had lost in the camps.

My father sailed on the Pan York during its second voyage, its first having taken place after Israel’s War of Independence had begun. On my father’s voyage on the Pan York, there were about 2,800 people on board. On each of three floors of the Pan York, wooden shelves 5 1/2 feet deep and three tiers high were constructed to carry the human cargo.

This meant that typically, each passenger had a shelf space 20 inches wide and 5 feet deep; there were no pillows or mattresses. As my father was 6 foot 1, more than half a foot of him stuck out over the edge of his shelf when he would lie down to sleep. During the five-day trip to Palestine, there was no fresh water; my father was rationed one glass of water a day. Lowenstein recalls the experience:

Food consisted of cheese and crackers for breakfast, broth and crackers for lunch, sardines and crackers for dinner. There were no toilets with running water for the 2,800 passengers, just 10-hole outhouses. The five days on the Pan York were the most miserable of my entire life. Yet, for the Holocaust survivors, it was not that bad. They had seen the same and worse — for years, often without food.

The Pan York was one of the many boats involved in what was known as Mossad l’Aliyah Bet (Aliyah Bet for short), a network of ships from around the world whose purpose during the British Mandate for Palestine, which lasted until May 1948, was to smuggle more than the sanctioned 1,500 Holocaust survivors into Palestine per month. On these ships, alongside the DPs, Machalniks like my father were also being smuggled in to defend Israel. The ambition of Aliyah Bet was to break the back of the British blockade. At the time, hundreds of ships were carrying DPs toward Palestine. Most were European, with only 10 ships (plus three or four smaller boats) sailing from the United States.

Machalniks were not just smuggling themselves and others past the coastguard; they were facing off with the pre-eminent global naval power — Great Britain. In control of its mandate, Britain had seemingly promised a Jewish state in the Balfour Declaration of 1917. But the MacDonald White Paper of 1939 — created to placate the oil-rich Arabs — seemed to countermand that agreement. David Ben-Gurion, in response, declared, “We will fight the war as if there were no white paper and fight the white paper as if there were no war.”

Aliyah Bet was part of Ben-Gurion’s fight. On the face of it, Aliyah Bet was intended to keep the world spotlight on the need for a Jewish state. But British actions convinced Machalniks and others that regardless of the mandate, the British government was setting up Israel to fail as a nation. At the time, the British were allowing in only 1,500 DPs each month and constructing naval blockades, all the while allowing the surrounding Arab nations to enter and attack, including the Transjordan army, which was even trained and equipped by the British.

Most of the men I interviewed believed they were fighting for Israel’s very survival and that their actions had more profound strategic implications. One Machalnik, who wishes to remain unnamed, told me of Jon Kimche’s contemporary political analysis. Kimche argued that carrying DPs to Palestine from Europe served a more important purpose than mere publicity. Ernest Bevin, the British foreign minister, had acted to effect the Morrison-Grady Plan between 1945 and 1947. This plan, agreed upon by the British and the Americans, called for a single sovereign state with British military control and Arab sovereignty, in which there would be a number of cantons, including a Jewish canton.

According to Kimche, Bevin had calculated that there were about 200,000 Jews capable of military action in Palestine and that 100,000 British soldiers could control and manage any Jewish uprising. Bevin thus took great pains to block any further Jewish immigration. He turned back ships carrying DPs and facilitated the deportation of the passengers back to Cyprus, Eritrea or even Europe.

Eventually, however, the number of ships carrying DPs, among them the Pan York and the Hatikvah, overwhelmed the capacity of the Cyprus and Eritrea internment camps and ultimately broke the will of the British. Bevin eventually gave up on the Morrison-Grady plan and agreed to abide by the recommendations of the United Nations Special Committee on Palestine. Aliyah Bet, in essence, broke the Allied will to resist the emerging alternative of the partition of Palestine, which included a Jewish state in control of Jewish immigration. The men of Aliyah Bet forced Bevin to honor Balfour’s promise.

The Pan York, with my father aboard, docked in Haifa on August 14, 1948. When the ship reached port, most of the American volunteers did not speak Yiddish fluently enough to get past the U.N.’s inspectors. Lowenstein recalls that my father and the other American volunteers had to jump down to a tugboat on the starboard side of the ship in order to be smuggled into the country. The tugboat sailed to another secure dock, and my father was taken by bus to a kibbutz so that he could clean up and eat. From there, he and Lowenstein were driven directly to a DP camp in Tel Aviv called Tel Letvinsky. At the time, Tel Letvinsky was a former British army base; today it is the site of Tel Hashomer, an Israeli hospital.

My father and Ralph spent five days at Tel Letvinsky before they parted ways and journeyed to different units, never to see each other again. Before they left, they took a picture together with some other volunteers; it was that same sepia photo that my brother and nephew found by chance, and the same photo that started this journey for me. Ralph remembers the photograph being taken by an older man using a camera with no shutter. In order to capture the image, the man removed the lens cap for a second or so and then replaced it. In the photo, all the men are smiling. I can only imagine what was going through my father’s mind. He was 22 and had never seen a day of combat, but he was in Palestine illegally, ready to fight and risk his life for an idea: a Jewish state were Jews could live free from persecution.

What follows is a video that includes interviews of soldiers who fought for Israel as part of Machal.

For part one, click here; for part two, click here. Read part four in the May 8 issue.

Jonathan Kesselman is a screenwriter and film director (“The Hebrew Hammer”), and an adjunct professor at Yale University.