Between Wordsworth and ‘Shoah’ 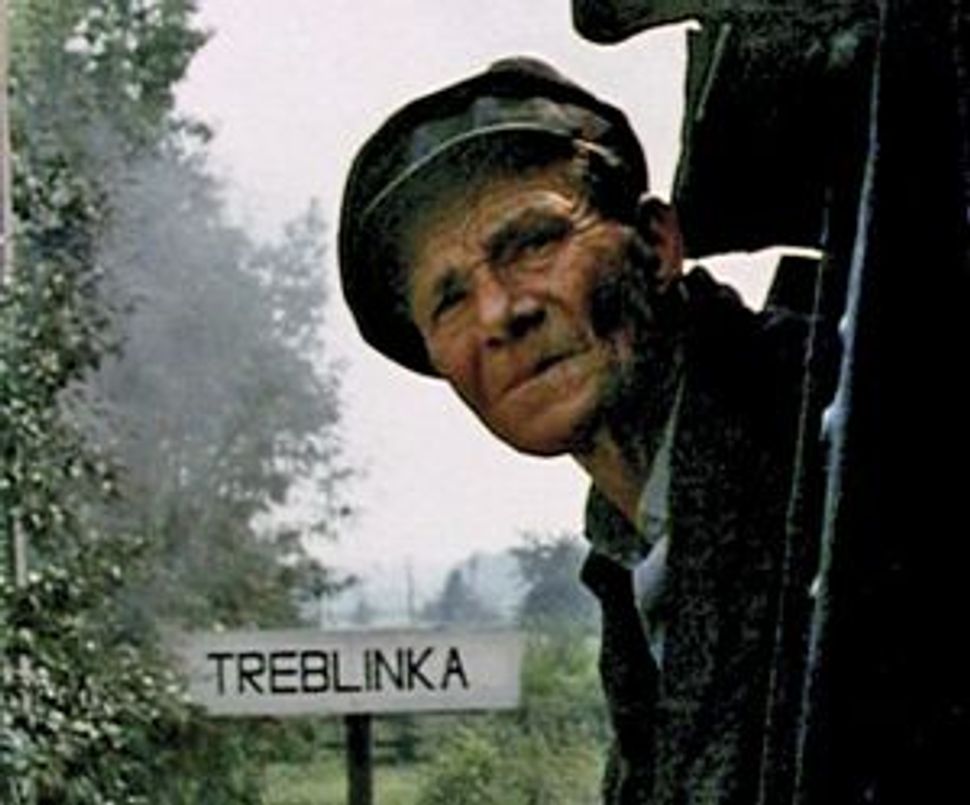 Never Look Back: Passing Treblinka on the train, a still from ?Shoah.? Image by COURTESY OF ABSOLUT MEDIEN

Claude Lanzmann, born 83 years ago in a northern Paris suburb, to parents of Ukrainian-Belarusian Jewish origin, is internationally famed as the director of the 1985 film “Shoah.” This epic film’s running time, depending on its country of release, is anywhere from 503 minutes in the United States to a whopping 613 minutes (with all that implies) in France. Lanzmann is the first to insist that “Shoah,” which comprises a series of devastating interviews with Holocaust survivors filmed over a dozen years, starting in the mid 1970s, is not a documentary, but rather a series of what historian Ruth Linn of Haifa University calls “survivor discourses,” along with some “expert discourse” from the eminent historian Raul Hilberg (1926–2007). Occasionally, Lanzmann pops up onscreen in “Shoah,” looking like a burly middleweight boxer whose galvanic physical presence and forceful verbal interjections doubtless helped prod interviewees to recount the horrors the survivors experienced. Yet the full weight of this became known only as recently as March 12, when Éditions Gallimard in Paris published Lanzmann’s fascinating 560-page memoir, “Le Lièvre de Patagonie,” (“The Patagonian Hare”), giving us a welcome example of directorial discourse about not only “Shoah,” but also the rest of Lanzmann’s remarkable life. 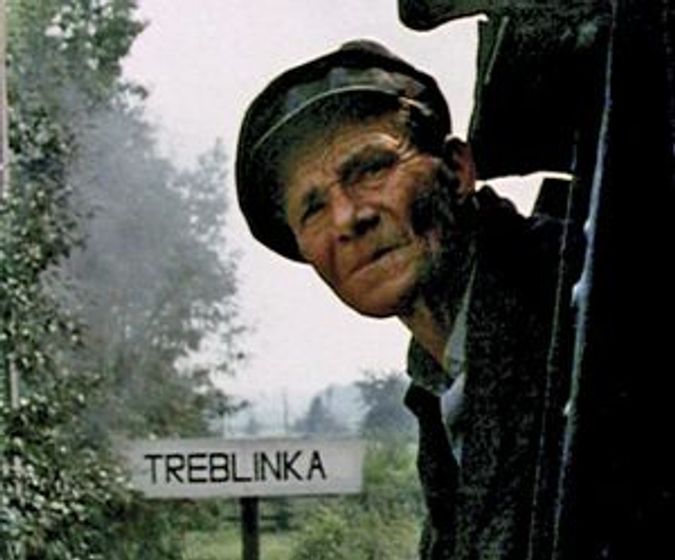 Never Look Back: Passing Treblinka on the train, a still from ?Shoah.? Image by COURTESY OF ABSOLUT MEDIEN

The unusual title refers to wild hares seen during Lanzmann’s travels over the years. They are metaphors of savage liberty, an essential motivating element for Lanzmann. “Le Lièvre de Patagonie” concludes:

I’ve thought of hares every day while writing this book, those of the Birkenau extermination camp which slid beneath the barbed wire that imprisoned humans; [hares] which burgeoned in the vast Serbian forests as I drove through by night, taking care not to kill them. Finally, the mythical animal which suddenly appears in my headlights outside the Patagonian village of El Calafate, quite literally stabbing my heart with the proof that I was in Patagonia… I was almost 70, but my entire being sprang up with wild joy, like when I was 20.

Alongside the Wordsworthian “My heart leaps up when I behold…” nature of Lanzmann’s memoirs are frank accounts of his leaping from one affair of the heart to another. These include a lasting relationship with Simone de Beauvoir (1908–1986), with whom he lived for seven years in her Paris apartment across the street from Montparnasse Cemetery. There, in full view of a memento mori, Lanzmann typically celebrated life; he recalled that in their apartment, the lovers had a “very loving housewarming, exploring the new possibilities conjointly presented by the place’s horizontality and verticality.” Lanzmann met de Beauvoir in 1952, after spending the war fighting in the Resistance in the depths of the French countryside. Just as he would confront Nazi war criminals in “Shoah” decades later, Lanzmann chose to face down Germans when he went to study philosophy in Tübingen in 1947.

Of Jean-Paul Sartre and de Beauvoir, Lanzmann writes in “Le Lièvre de Patagonie”: “They helped me to think; I gave them things to think about.” Sartre’s “Réflexions sur la Question Juive” (1946; literally, “Reflections on the Jewish Question”; translated into English in 1948 as “Anti-Semite and Jew”), although widely seen today as a dated text, addressed some essential questions for the young Lanzmann, helping him to “breathe in France, to accept a smile from French people and offer one in return. As a boy, I experienced pre-war antisemitism with fear and sometimes shame.… The portrait of an antisemite as sketched by [Sartre] was a true inner liberation not just for me, but for many others of my generation.”

“Le Lièvre de Patagonie” contains many other descriptions of travels and encounters, including a hasty love affair with a North Korean nurse during a 1958 fact-finding mission to study the dictatorship of Kim Il-sung. Indeed, during a March 19 online chat at www.lemonde.fr/, Lanzmann exclaimed that his next movie would be a “film about love and sex.” Reviewing the new memoir, French writer Philippe Sollers claims that Lanzmann’s work and life are “metaphysical events,” yet many pages also reflect the sensibility of a footloose adventurer and sensualist, much like Lanzmann’s younger brother, Jacques (1927–2006). Charming and engaging, Jacques, after also serving in the French Resistance, became the editor of the French girlie magazine Lui and translated the musical “Hair” into French. He is still famous for his saucy lyrics to such hit 1960s pop songs as “L’Hôtesse de L’air” (“Stewardess”), a parody of a German-Austrian alpine yodel in which a male singer declares, “All my life I’ve dreamed of being a stewardess, of showing off my bottom.” Amid such merriments, he also wrote more ambitious novels inspired by Jewish lore, none of which, alas, has been translated: “N’oublie Jamais Qui Nous Sommes” (“Never Forget Who We Are,” 1999), “Imagine la Terre Promise” (“Imagine the Promised Land, 2000) and “Rue des Rosiers” (2002), titled after a central street in Paris’s ancient Jewish quarter, Le Marais.

Like his younger brother, Claude Lanzmann has a perhaps unexpected reputation for sardonic wit. He was even called a “scintillating wild boar” (étincelant sanglier) by one journalistic colleague, much to his amusement. When one reporter from the magazine Télérama praised him for being responsible for “The Shoah,” Lanzmann cut him off bitingly: “No, the Shoah, that was Monsieur Hitler. ‘Shoah,’ c’est moi.” Sometimes, his deadpan bullishness can put people off — like film critic Roger Ebert, who during the 2001 Cannes Film Festival got between Lanzmann and a shrimp buffet, only for Ebert to conclude ruefully, after the confrontation that ensued, “You don’t have to be a nice man to make a good film.”

The reader of “Le Lièvre de Patagonie” might draw another conclusion: To make a great film, it helps to be an outsized personality, and Lanzmann certainly fills the bill. Not always without reproach, Lanzmann is nevertheless a “fearless knight” (chevalier sans peur), and his probing, insistent questions make “Shoah” into a quest film. The director-seeker is not trying to understand the Holocaust; Lanzmann has said that any such attempt to understand “why 1.5 million Jewish children were murdered” would be obscene. Instead, “Shoah” is a quest to incite survivors to bear witness. In 1985, reviewers commented that “Shoah” did not use historical footage, but in the intervening quarter-century, the film itself has become essential historical footage, with even its outtakes rightly prized and housed in the United States Holocaust Memorial Museum, which has posted many of them online.

It is sad and shocking that almost all of Lanzmann’s films are unavailable on DVD in the United States, and even “Shoah,” distributed by the recently bankrupt New Yorker Films, may soon be subjected to the same fate. Along with prompt translation of this new memoir by an intelligent publisher, films like “Pourquoi Israel” (“Israel, Why”; 1972), “Un Vivant qui Passe” (“A Visitor From the Living”; 1997), and 2001’s “Sobibor, 14 Octobre 1943, 16 Heures” (“Sobibor, October 14, 1943, 4 p.m.”; 2001) are long overdue for DVD release in America. Precious survivor discourse like Lanzmann’s films is as fertile as, in their own way, the Patagonian hares by which the director is so captivated.

Between Wordsworth and ‘Shoah’