Succeeding Yourself Out of Business 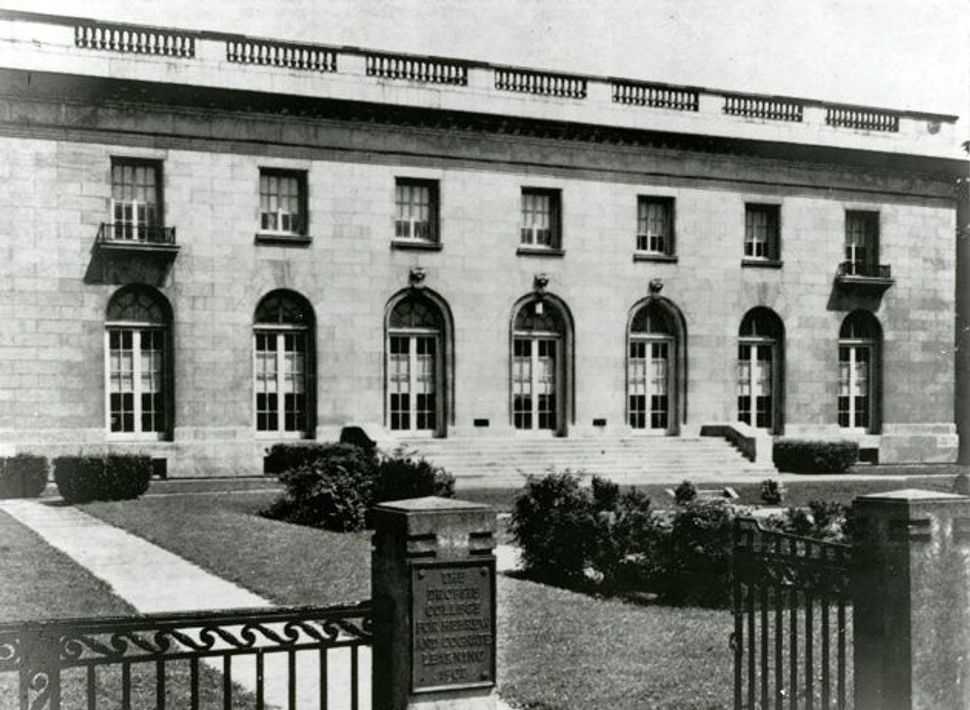 Cognate Learning Outsourced: The Dropsie College for Hebrew and Cognate Learning (pictured here) opened in 1907 and closed as a college in 1986. Image by COURTESY OF THE LIBRARY AT THE HERBERT D. KATZ CENTER FOR JUDAIC STUDIES, UNIVERSITY OF PENNSYLVANIA

As graduations fill our calendars and graduates fill our thoughts, it’s a good time to reflect on the state of higher education within the American Jewish community — or, more to the point, on the changes that have defined that academic landscape over the past century. Judaic studies, it’s true, are thriving beyond anyone’s wildest expectations. Hundreds of American college campuses feature lively programs that explore one or another aspect of the Jewish experience, offering courses that range from biblical Hebrew to post-Zionism, and from medieval Jewish history to contemporary American Jewish affairs. But, as the current financial difficulties in Jewish higher education show, the wholesale success of Judaic studies at the collegiate level carries a cost: the reconfiguration, the eclipse, or even the disappearance of what had once been a mainstay of the community — its very own academic institutions of higher learning.

Well before Brandeis University was a glimmer in anyone’s eye, way back when the purely intellectual pursuit of matters Hebraic and Judaic — much less Jewish collegians to pursue them — was in short supply at the university level, Dropsie College for Hebrew and Cognate Learning and Gratz College in Philadelphia, Baltimore Hebrew College and the Hebrew Teachers College of Boston (later renamed Boston Hebrew College), among others, filled a large void. Offering a nontheological, independent approach to the study of Jewish culture, these institutions sought to do for American Jews what the Wissenschaft des Judentums movement accomplished for its German counterparts: the cultivation of scientifically trained professors and educators, as well as a laity knowledgeable in Jewish Kultur.

Whether at Philadelphia’s Gratz College, which was founded in 1893, or at Dropsie, which became a reality 14 years later, or Baltimore Hebrew College, which was established in 1919, or at Boston’s Hebrew Teachers College, which emerged in 1921, the goal throughout was the “diffusion of Jewish knowledge” in ways that were “most desirable and most practicable.” Toward that end, Gratz and the two Hebrew colleges focused most of their initial energies on training teachers to fill the expanding ranks of afternoon Hebrew schools and newly created boards and bureaus of Jewish education; Dropsie, in turn, focused most of its energies on scholarship. In the years that followed, Gratz, Boston and Baltimore Hebrew colleges managed to hold their own by rethinking their “possibilities of usefulness,” as one Gratz official put it, spearheading successful initiatives in trans-denominationalism, communal outreach a

Dropsie College was not nearly as fortunate. Thanks to a bequest from successful Philadelphia lawyer and investor Moses Dropsie, the school offered a “branch of knowledge not readily accessible in general institutions of learning.” By its benefactor’s lights, that meant the advanced study, the “ripe scholarship,” of biblical and rabbinical literatures from a decidedly secular perspective. With a distinguished faculty of its own, as well as a stellar visiting faculty that consisted, in 1910, of such luminaries as George Foot Moore of Harvard University and Solomon Schechter of the Jewish Theological Seminary, the school drew hundreds of students eager to become professors or archaeologists rather than pulpit rabbis or Hebrew teachers. Bernard Revel, who would go on to become president of Yeshiva College, was among them.

A hub of advanced scholarship in “Orientalistics” and philology, Dropsie also boasted a library filled to the rafters with rare Judaeo-Arabic manuscripts, fragments from the fabled Cairo Genizah, that treasure-trove of long discarded documents, and 15,000 books, among them the personal holdings of Rabbi Isaac Leeser. What’s more, the “chaste and impressive” facility routinely played host to meetings of both the Jewish Publication Society and the American Jewish Historical Society, suggesting that it saw itself as an integral part of the communal fabric.

Despite its shining credentials, Dropsie was eventually unable to compete with the growing number of graduate programs in Semitics or the ancient Near East offered by the nation’s leading universities. In the end, Dropsie had become a victim of its own success. The Philadelphia institution had made it possible for American Jewish men to contemplate viable academic careers as Semiticists, Egyptologists and professors of biblical Hebrew, but increasingly, the training they sought was not at Dropsie but at Harvard, Yale or Penn — which is where Dropsie’s much vaunted library, ironically enough, came to be housed.

A chance encounter with a book from that library, now a part of the holdings of Penn’s Center for Advanced Judaic Studies, fed my curiosity about Dropsie’s once glorious past. Coming of age in a different era, I had remained completely in the dark about the school’s existence until I happened upon a volume that still bore the shadowy markings of its former steward. I don’t recall the title, but the sobering realization that a proud institution named Dropsie College had once existed but was no more stayed with me through the years.

At first blush, then, my story is not a happy one. How sad to think of institutions of higher learning falling prey to the vicissitudes of history, especially given their initial success as well as the high hopes, the enthusiasm, the rosy and buoyant visions of the future that attended their establishment. All the same, I can’t help but wonder whether something positive can be said about the implications of this story: that the broader cultural processes that enabled Jewish culture in America to move beyond its original confines and to find a home for itself in the wider world is something to applaud rather than decry.

I’d like to think that Moses Dropsie himself would have approved. The institution that he founded and funded, as Arthur Kiron, the Schottenstein-Jesselson curator of Judaica collections at the University of Pennsylvania, explains in his history, was animated in large measure by a search for acceptance and cultural parity. While some American Jews searched for common ground on the ball field or in the boardroom, Dropsie College for Hebrew and Cognate Learning sought acceptance for the Jews and their cultural patrimony in the groves of academe. In this, it succeeded, laying the groundwork for the flourishing of Judaic studies in colleges and universities across the land. Perhaps, then, the fate of Dropsie and its sister institutions of higher Jewish learning is the price we pay for integration.

Succeeding Yourself Out of Business