Anything You Can Do 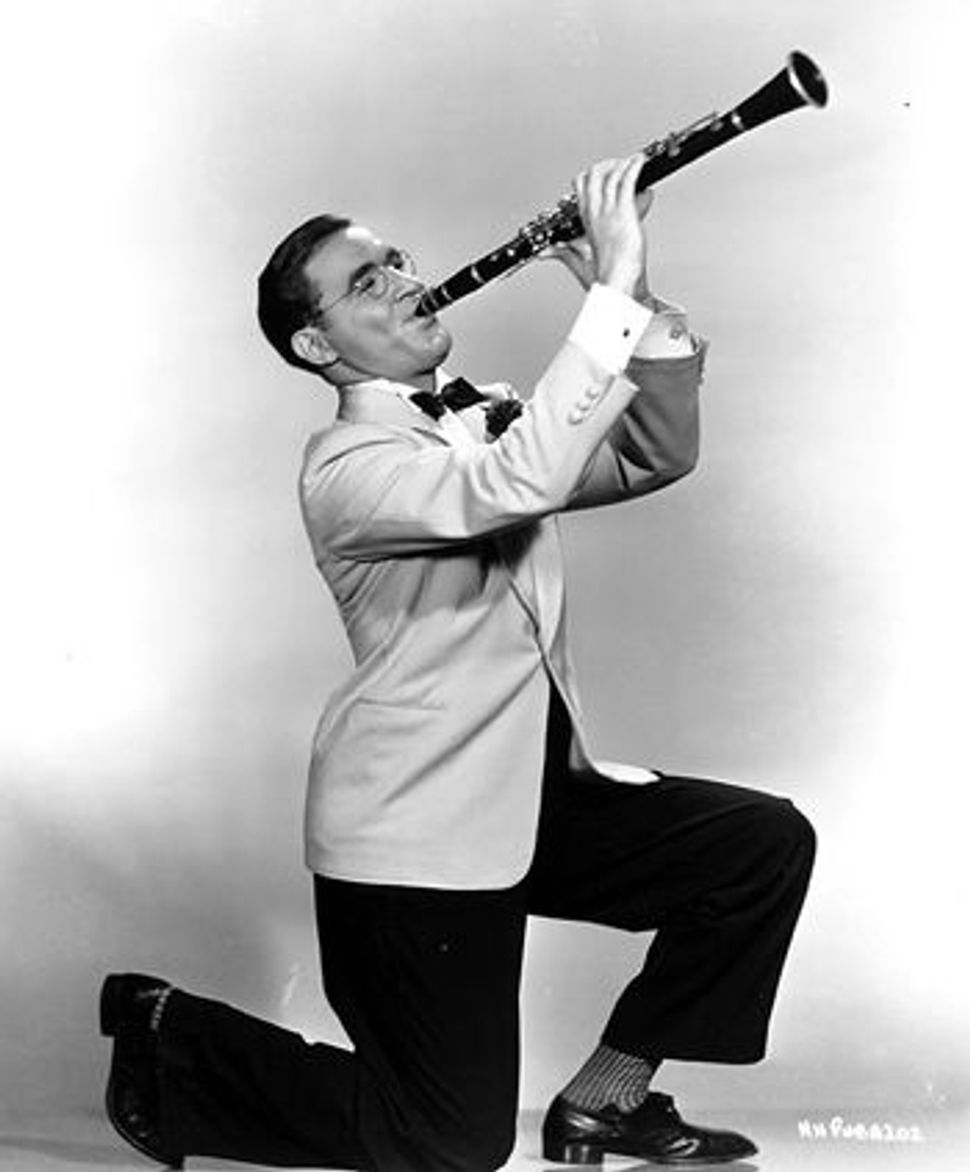 In jazz terminology, it’s known as “call and response”: The trumpet section plays a few notes, which are answered immediately by the saxophones. Or, a soloist will give out with a four-bar phrase and then hear it echoed back at him by the full ensemble. Call and response is as essential to big band swing as the idea of “theme and variations” is to classical music.

One of the most outstanding examples of the concept in action is “Down South Camp Meetin’,” by Benny Goodman and His Orchestra (composed and orchestrated by Fletcher Henderson) — the second tune performed from May 28 through May 30 by the Jazz at Lincoln Center Orchestra at its long-awaited Benny Goodman Centennial concert, held at Rose Hall. As the term indicates, call and response is thought of as African-American church music from the South, yet Goodman, a Jewish musician from Chicago, was among its greatest exponents.

The concept of call and response obviously appealed to Goodman’s highly competitive nature: Someone does something, and you do something right back. As ambitious as he was talented, Goodman competed with everybody: He was driven to lead a band that could outplay every other band, and as a soloist himself, he took no prisoners. He competed with other bandleaders, other clarinetists, even the musicians in his own band, and many of his most celebrated works were essentially competitions with his orchestrators, in which he dared the greatest arranging and composing minds of several generations to just try and write something too tough for him. (As if they could.)

That’s why the idea of stacking the deck with five major clarinetists to pay tribute to Goodman was a particularly appropriate one: Not that the show was advertised as “Clarinet Idol,” but with so many kick-ass players on hand, the competitive spirit was obviously present. For these three sold-out shows, Jazz at Lincoln Center recruited three hired gunmen, Bob Wilber, Buddy DeFranco and Ken Peplowski, to accompany the two sharpshooters from their own reed section, Victor Goines and Ted Nash.

Wilber, who served as musical director and guest conductor (Wynton Marsalis was playing David Letterman’s show that night), concentrated on 1930s arrangements by Henderson in the first half and ’40s ones by Eddie Sauter and Mel Powell in the second. Goines and Peplowski were given the unenviable task of taking on the spirit of the King of Swing himself in Sauter’s “Benny Rides Again” and “Clarinet à la King,” two of the hardest — and most amazing — jazz concertos ever composed for the instrument. 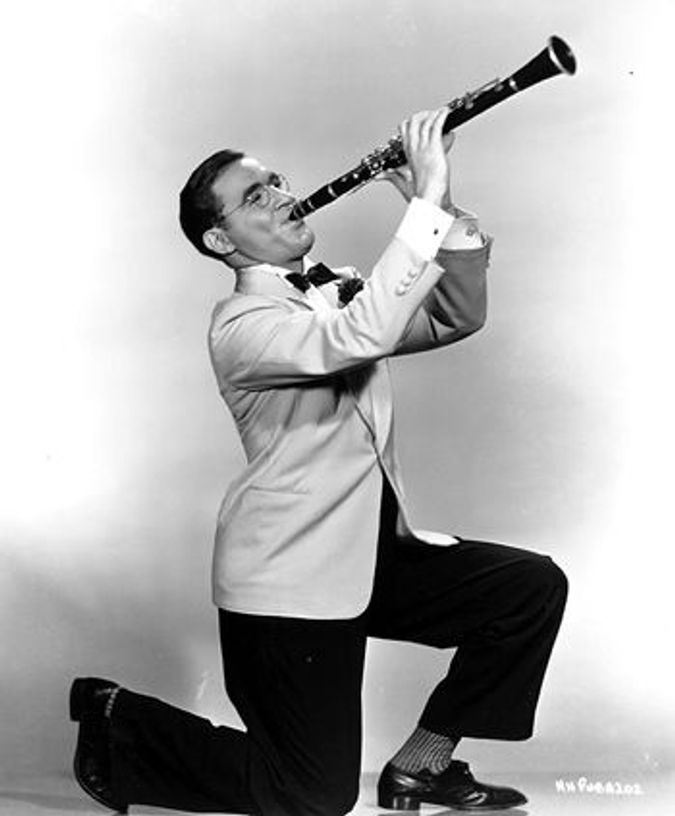 Although Goodman put big band swing on the map, he was also an unparalleled master of small group jazz. For the night, Wilber re-created Goodman’s original trio with pianist Dan Nimmer and drummer Ali Jackson. The only thing lacking from the 1937 quartet version of “I Got Rhythm,” — most famously played in the film “Hollywood Hotel” — was the vibraphone part, in which the call and response between Goodman and Lionel Hampton is truly hair-raising. DeFranco, who at 86 remains the greatest clarinetist of the modern jazz era, essayed “Poor Butterfly” and “After You’ve Gone” in the style of the 1941 sextet with Charlie Christian, evidencing the brilliant tone and advanced improvisational skill that make him one of those rare individuals for whom the term “living legend” is not an overstatement.

Wilber, surprisingly, wound up the ’30s half with a re-creation of “Sing, Sing, Sing,” from Goodman’s groundbreaking 1938 Carnegie Hall concert. (I say surprisingly because that may be the single best-known and most exciting piece in all of the Goodman canon. How to top it for the second half?) They regrouped after the intermission, with two ingenious arrangements by Wilber in which classic Goodman solos were harmonized for four clarinets: “Let’s Dance” (Goodman’s theme song) and “Rachel’s Dream” (the clarinetist’s own variation on “Three Little Words,” named after his daughter).

Alas, trying to encompass Goodman’s 60-year entire legacy in a single evening is a bit like summarizing Marcel Proust in a single paragraph. The concert was at once too ambitious, in that Wilber bit off so much, it would have been impossible to chew it all (Peplowski and Goines seemed underutilized). But at the same time, JALC’s Goodman Centennial celebration wasn’t ambitious enough: Since Rose Hall was burdened with an overabundance of both music and paying customers (not a bad problem to have), Marsalis and company should have mounted a concurrent, smaller-scale Goodman tribute in the Allen Room, utilizing the same three visiting firemen clarinetists to concentrate on the music of Goodman’s trios, quartets and sextets. It’s one thing to leave a crowd wanting more, but at 10:15 p.m., Wilber (and his wife, vocalist, and mistress of ceremonies Joanne “Pug” Horton) begged off without even an encore. (To get my “Phil” — Schaap, that is — of Goodman, I had to run home and turn on WKCR’s ongoing Benny-thon, which finished, after 15 days, on June 2.)

To give the musicians their due, it would have been hard to top the finale that they already had played: the 1946 version of “Oh, Baby.” Apparently, both Goodman and arranger Mel Powell approached this update of a 1928 pop tune with the determination to make it outdo “Sing, Sing, Sing.” “Oh, Baby” is even more of a kitchen sink concoction (a patshkeray, as Benny’s mother might have said) that throws in everything, including a vocal (originally taken by the leader himself), a concerto grosso format that utilizes both a small group and the full orchestra and climaxes in a zillion modulations.

Lincoln Center’s treatment was even larger than life in that it spotlighted all three guest stars — Wilber, Peplowski and DeFranco — playing both in collaboration and in competition. The marvelously over-the-top arrangement, as you might expect, was loaded with call and response: At one point, the chart even quoted Dizzy Gillespie’s “Salt Peanuts,” a signature theme of the early bebop era. By now, not content to have players, composers and orchestras competing, Benny Goodman was pitting entire genres of music against each other. Will Friedwald was the jazz reviewer for the late New York Sun and is the author of seven books on music and popular culture.

Anything You Can Do