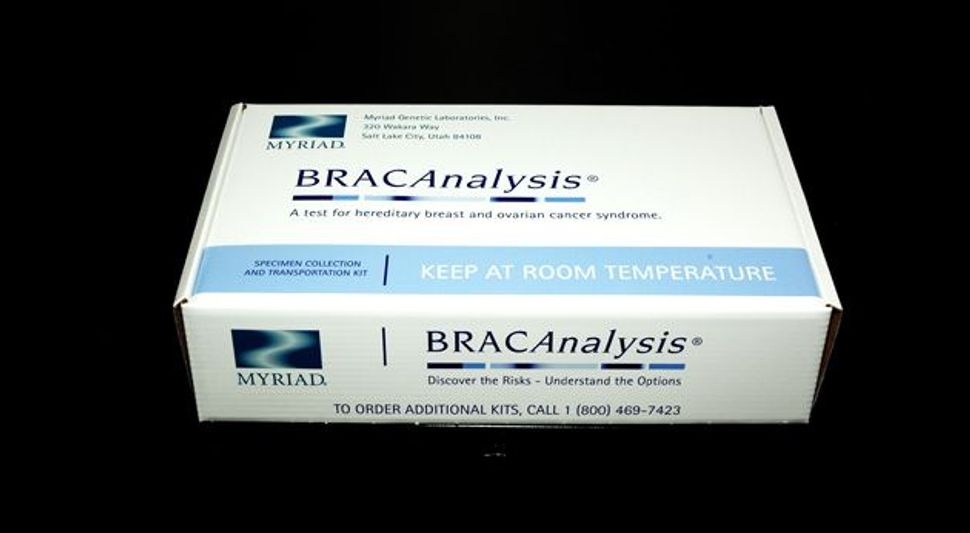 Test Case: Myriad Genetics holds the exclusive right to test for cancer-causing mutations on the BRCA1 and BRCA2 genes. Image by COURTESY OF MYRIAD GENETICS

‘If you walk out into the street and tell someone that a company owns their genes, they’ll look at you strangely,” said Barbara Brenner, executive director of Breast Cancer Action. “But that is exactly what has happened.”

Brenner’s group is one of several plaintiffs in a lawsuit recently filed in federal court challenging patents controlled by Myriad Genetics on BRCA1 and BRCA2, two genes that can carry mutations dramatically increasing the risk of breast and ovarian cancers. The cancer-causing mutations on the BRCA1 and BRCA2 genes disproportionately afflict Jews, with one in 40 Ashkenazic Jews carrying the mutations.

Women with a family history of breast cancer are encouraged to get tested for these mutations, and those who discover they are carriers may opt for preventative surgery, such as mastectomies or having their ovaries removed. Currently, however, Myriad — which holds an exclusive license for testing and research on the genes — charges $3,000 a pop for the tests. While many health insurance providers cover the test, the plaintiffs cite instances in which, they allege, Myriad’s policies and the test’s cost have limited access to necessary testing.

“We have alternative ideas for how to do the testing, but we can’t implement it. I can do research on it, but if there is any commercialization of that research, Myriad could shut it down,” said Dr. Harry Ostrer, director of New York University’s Human Genetics Program and a plaintiff in the case. “Even if I offered free testing, there’s still the possibility that they could shut it down.”

The current lawsuit against Myriad has been referred to as a potential landmark case. The suit, spearheaded by the American Civil Liberties Union, names the U.S. Patent and Trademark Office as a defendant, along with Myriad.

The complaint, which was filed in May in the Southern District of New York, maintains that the entire idea of patenting genes is unconstitutional. The ACLU contends that patents on genes constitute a patent upon “laws of nature and abstract ideas and basic human knowledge or thought” and therefore violate the First Amendment.

The ACLU has assembled a weighty list of plaintiffs to bolster its challenge to the claim that genetic patents spur research by offering financial incentives to researchers. The Association for Molecular Pathology, the American College of Medical Genetics, the American Society for Clinical Pathology and the College of American Pathologists have all signed onto the case.

Critics of the status quo on genetic patents express hope that the Myriad case will be an important turning point in their fight. “I see us winning a stunning victory,” Ostrer said.

The Myriad case is the latest episode in an ongoing legal saga over genetic patents. In 1980, in Diamond v. Chakrabarty, the Supreme Court upheld a patent on genetically engineered bacteria. Lower courts cited that Supreme Court decision to rule in favor of patents on genes. Under current federal policy, a fragment of DNA removed from the body and isolated to a sequence whose utility — that is to say its biological function and practical implications — can be described is patentable for up to 20 years. This has implications for both research and genetic testing.

“In the early days of genetic patenting, in the ’80s and ’90s, the defense for gene patents was: ‘Of course we would never enforce them in genetic testing. There’s no money to be made from genetic testing,’” Ostrer said. “But then Myriad proved that wrong.”

The Myriad case, however, is not the first legal challenge to a genetic patent, or even the first to a patent relating to a genetic disorder that disproportionately affects Jews.

Miami Children’s Hospital was taken to court in 2000 over its patent on the gene involved in Canavan disease, a deadly genetic disorder that damages affected children’s brains and is most prevalent among Ashkenazic Jews. Families of children afflicted with Canavan disease contributed money and genetic material to the research effort that discovered the gene, only to see the hospital patent it and begin charging royalties on carrier testing. The Canavan families responded by taking the hospital to court. A confidential settlement was reached in 2003 that allows for license-free use of the gene in research to cure Canavan disease, though the hospital continues to license and collect royalties for clinical testing. According to Ostrer, those fees come to $12.50 a test.

The battle over the Canavan patent stands in contrast to the patent situation for the gene that causes familial dysautonomia, another Ashkenazic genetic disorder. The genetic mutations that cause FD were discovered in 2001 as a result of a research effort launched in the 1990s by the Dysautonomia Foundation, which is run by families of those afflicted with the disease. The foundation now holds the license to the relevant genetic patent.

“We were familiar with some horror stories for other genes where researchers had gotten the license to the gene and then had made it extremely expensive for other researchers to do work or expensive for people to do genetic testing,” said David Brenner, executive director of the Dysautonomia Foundation. “So as the families of the people afflicted with FD, and as those who firsthand knew how bad it would be for others to have FD, we thought that it was a wise strategy to find the gene and make sure that no one else could abuse the rights to the gene.”

Brenner said that the foundation has never charged a fee to nonprofit or academic institutions or anyone working to develop therapies for FD. But, he added, the foundation does collect “a very small royalty” from commercial laboratories that profit from carrier testing, with proceeds going toward research for treatment of the disease.

“Most people who go to patent a gene do it for profit and to get advantage either in the marketplace or in research,” he said. “We tried to do exactly the opposite.”