In Druze Genes, a Look Back at the Distant Past 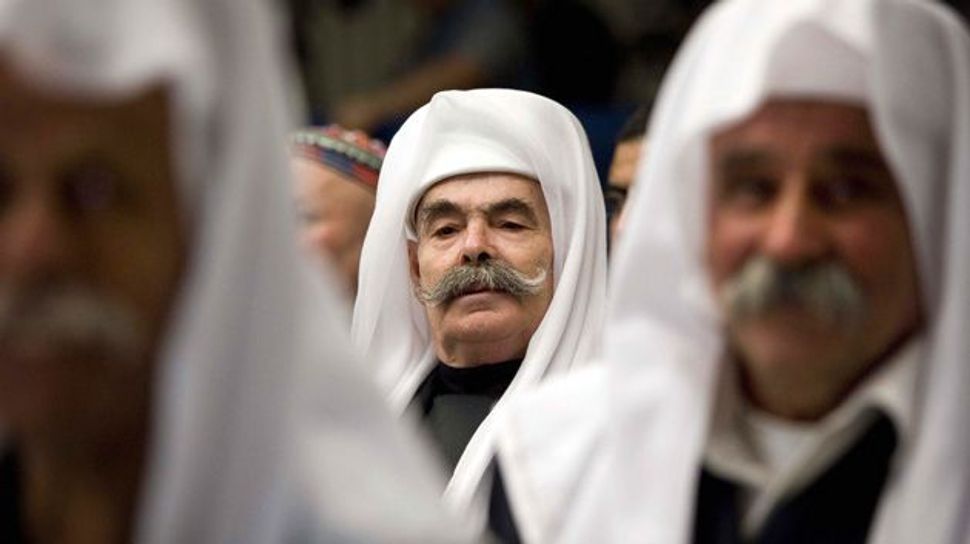 Secretive Sect: The Druze don?t intermarry, and they don?t discuss their religion with outsiders, but in their genes Israeli scientists have discovered secrets that shed light on an important chapter in human history. Image by GETTY IMAGES

Who knew that Israel’s Druze had been holding a key to understanding an important dimension of human history?

A new examination of the DNA of this small and insular Levantine group — which follows a secret religion and hardly ever intermarries — has brought us one step closer to better understanding how the world’s various populations came to be living where they are.

An international research group led by scientists at the Technion-Israel Institute of Technology released a study last year that found that Israel’s Druze population has a remarkable diversity of mitochondrial DNA, a type of genetic material that is passed down virtually unchanged from mother to daughter.

In most parts of the world, local populations each have a limited variety of mitochondrial DNA. But among Israel’s Druze, who number 120,000, researchers found an unprecedented variety, including strains that are generally found only in specific geographic locations as far flung as the Far East.

“We believe that the Druze are a relic of the population of people who lived here perhaps 10,000 or 15,000 or more years ago — before any of the population groups we know about — and that these people were one of the sources for the people of the planet,” said Dr. Karl Skorecki, a professor of medicine at the Technion who headed the study.

What was missing until Skorecki’s research was evidence proving that many of the forms of DNA now found around the world were once concentrated in the vicinity of this “migration station.” Skorecki — who describes himself as an “archaeologist” who “digs” through DNA to discover the past — called the Druze a “genetic sanctuary” of a long-gone age.

Dr. Fuad Basis, one of the report’s co-authors and director of public health services at Haifa’s Rambam Medical Center, used the analogy of a greenhouse to explain the findings. “This shows that the Druze community is, in my opinion, a kind of greenhouse where there are all different types of ‘plants,’ or in our case, DNAs,” said Basis, who is himself Druze.

Basis said that in the future, researchers wanting to study different DNAs may well approach Druze communities instead of conducting international research projects.

Although the researchers took samples almost exclusively from Israeli Druze, Skorecki said he believes that if surveys were conducted in Syria and Lebanon, the other main population centers for the world’s Druze — thought to number 1 million to 1.5 million — the results would be similar.

One reason for Skorecki’s confidence is that, while Druze marry cousins, keeping the bloodline within clans, most clans are transnational, and among them matches are made between cousins of different countries. This means that modern political borders have limited relevance when discussing Druze genetics, as Druze populations from different countries draw on a common gene pool.

The Druze do not discuss their faith and beliefs with outsiders. It is known, however, that they consider their faith to be a non-ritualistic interpretation of the three monotheistic religions — Judaism, Christianity and Islam — and that they venerate various prophets, including Jethro, the father-in-law of Moses.

Skorecki became well known internationally in 1997 when he discovered a patrilineal DNA link between Jews from around the world who claim to be *kohanim, *or priests. This discovery confirmed that there is truth to the claim that modern-day *kohanim *are descendants of a single male ancestor. Skorecki’s reputation as one of the leading Jewish population geneticists was cemented in 2006 when he led a team of researchers that found that 40% of Ashkenazic Jews are descended from just four “founding mothers” who lived in Europe 1,000 years ago and were likely of Middle Eastern origin.

While the Druze religion was officially established in the 11th century, oral tradition maintains that the Druze people was in existence many thousands of years before and is composed of remnants of numerous ethnic groups. To the delight of Druze community leaders, who cooperated with Skorecki’s research, the study’s findings are consistent with that understanding of Druze history.

“This teaches us to respect and take seriously oral traditions that religious groups carry and not to treat them lightly as some are tempted to,” Skorecki said.

For Basis, Skorecki’s Druze colleague, the finding was more than academic. “I’m not going to hide it from you that I was scared about the results. If they would have been different, what could I have done? I would have been worried,” Basis said. “Happily, the Druze community was very proud of the results.”

On a more practical level, confirmation of the Druze community’s genetic diversity could help guide counselors who deal with genetic diseases. For some ethnic groups, characterized by a high degree of genetic homogeneity, doctors take a community-wide approach to genetic counseling. For example, screening for Tay-Sachs and other genetic diseases is promoted across Ashkenazic Jewry.

But for the Druze community, which has a diverse genetic makeup and in which marriage tends to be within clans, different clans are vulnerable to different diseases. “This shows that genetic counseling for the Druze should be directed to clans or villages instead of community-wide,” Skorecki said. The findings, he said, are beginning to shape health care provision by Israel’s Ministry of Health.

In Druze Genes, a Look Back at the Distant Past