For Four Decades, a Doctor’s Legacy of Life 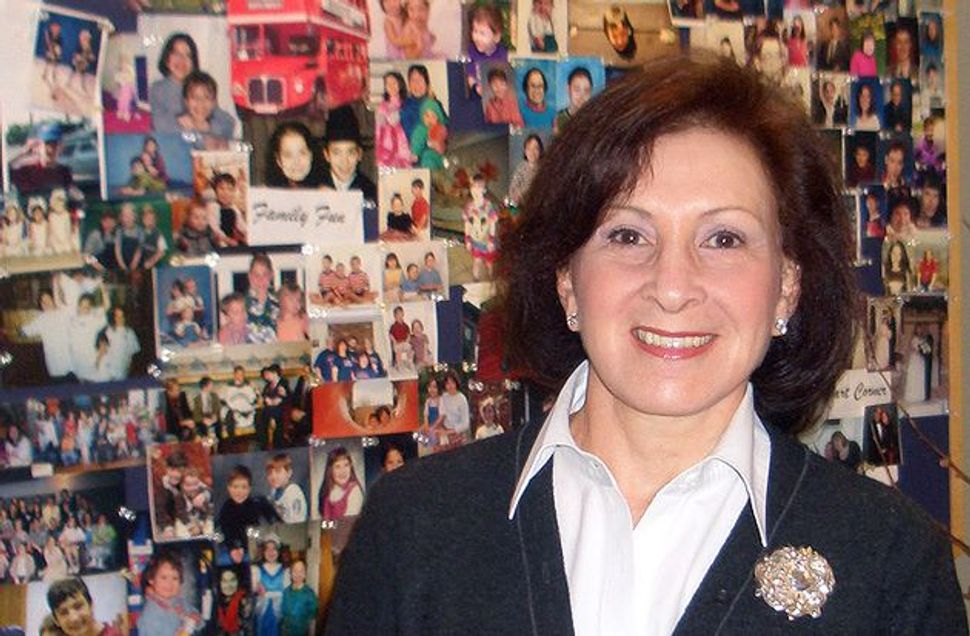 They Are Family: Dr. Felicia Axelrod has pioneered life-saving treatments for those afflicted with familial dysautonomia, such as the patients featured on the wall of photos behind her. Image by CoURTESY oF DR. FElICIA AxElRoD

Forty years ago, when Dr. Felicia Axelrod began caring for patients with familial dysautonomia at the New York University Medical Center, 50% of parents who had children with the rare genetic disorder could expect to bury them before they reached the age of 5.

Today, thanks in large part to her pioneering work on treating FD, there is a 50% chance that children born with the disease will live to be 40. That means many parents can now expect to be at their children’s bar and bat mitzvahs, their graduations and even their weddings.

“When the first FD patient had a child, I received a call from Dr. Riley, who was one of the men who identified the disease in the 1950s, expressing his disbelief that anyone could ever live that long,” Axelrod said.

“My husband delivered the baby,” she added with a smile. “It’s a family practice.”

Familial dysautonomia is a disorder of the nervous system that renders bodies unable to do the things that bodies are supposed to do automatically: regulate blood pressure, regulate heart rate, swallow, create tears, cough, feel pain. Those afflicted with FD experience severe crisis states — vomiting for days on end, spikes in temperature and extreme discomfort. Four decades ago, it was considered almost impossible to keep kids with FD alive.

“Dr. Axelrod is a hero in the FD community and in the history of FD,” said David Brenner, executive director of the Dysautonomia Foundation. “It’s hard to measure her impact on the quality of life and the life expectancy for people with FD. Without her role over the last 40 years, quite frankly many patients with FD would not have survived. And I know that my own son would not have survived without her intervention and her help.”

The mutated genes that cause FD were first identified in 2001. The disease is an autosomal recessive disorder, meaning that it is manifested among those who have two copies of the mutated gene, which can be inherited when both parents are carriers of the mutation. There are currently about 350 people around the world known to be living with the disease.

Axelrod started seeing patients with FD at NYU’s medical center after completing her residency there. “I became fascinated with familial dysautonomia, and the children were so engaging, and the families were desperately in need of help, so a bond was created, and we decided to start this journey together,” she recounted. In 1970, only a year after completing her residency, Axelrod founded NYU’s Dysautonomia Treatment and Evaluation Center, which she continues to lead.

“In that year, there were really only about six or eight families that I had the opportunity to meet, but once I let it be known that I was willing to take on the patient responsibility, they came from everywhere,” she said, referring to the opening of the center. “At the end of the first year there were 50, and it grew in a logarithmic manner. It just took off.”

At the time, Axelrod said, the leading cause of death among FD patients had been lung disease, caused by swallowing the wrong way.

“There was a lot of misinformation,” Axelrod recalled. “The parents were told that their children were reacting the way they were because they were allergic to milk. But when we did swallowing studies, we learned that the milk was getting into their lungs. We had to stop the misdirection of the milk going down into their lungs and still figure out how to get them nutrition.”

In the early 1980s, Axelrod and her staff began to insert feeding tubes through patients’ skin directly into their stomachs, bypassing the mouth. This helped avoid the lung problems, such as pneumonia, as well as ensure fluid and caloric intake. Patients avoided hospitalization, and their life expectancies went up. “It dramatically changed not only the risks of FD to their life, but the quality of life improved because they were able to stay home, they were able to be managed at home and cared for at home by their families,” she said. Axelrod said that some 80% of FD patients require these tubes, especially for ingesting liquids.

Another success had to do with managing the crisis states and associated high blood pressure that FD patients experience. By speaking with parents about what was working for them, Axelrod realized that symptoms could be brought under control through previously untried medications delivered in ways the body would accept.

When talking about her work and the progress that she has made, Axelrod almost never uses the pronoun “I,” despite her obvious trailblazing and the relief that she personally has delivered to families of those afflicted with FD and to the patients themselves. This reflects not just professional humility but also her approach to medicine.

Axelrod has made close coordination with families a cornerstone of her fight against FD. Along with relying on parents for information gathering, she also had to empower them to take care of their children themselves. In the process, Axelrod has developed strong bonds with these families.

“I started my own family around the same time that I took the job to work with these children,” she said. “And so I had two families from the very beginning.”

For a place that treats a disease as wicked as FD, there are a lot of smiles in Axelrod’s office. A bulletin board in the waiting area is covered with pictures of the children she treats, and their happy moments and simchas. The physicians and staff have figured out a way to make the place feel hopeful.

While it must be incredibly difficult for parents to learn that their children have a currently incurable disease, and to hear her recommendations of sometimes difficult treatments and tasks, at least they know that they are not alone. Indeed, the parents who come through her center call each other “cousins.”

And on that team, Axelrod seems to always be on the field. Axelrod gets in at 8 a.m. each day and sees patients, both those who come in with emergencies and those who come in for annual checkups. Their exams take up to four hours because the clinic has to do diagnostic tests that carefully check every part of the sensory and autonomic systems. The disease is progressive, and so some symptoms show up later in life.

“For some reason, after adolescence their balance gets worse and their vision starts to fail them,” Axelrod explained. “The aging processes for certain portions of the body accelerate.”

Today, patients come to Axelrod and her center from far and wide, often on an annual basis. An affiliated center in Israel sends reports on each of its patients to her at NYU.

Thanks to screening and heightened awareness of FD, the number of those born with the disease is declining. Yet children with FD are still being born. So far in 2009, Axelrod said, there have been at least four babies born with FD.

For these children, Axelrod continues to push to find a cure and improve their quality of life, helping them, in the words of one of her adult patients, to not “let FD define them.” Axelrod said she wants them to be able to do whatever their hearts desire, just like unaffected children and adults.

“My goal is to give the parents what every parent wants, which is to have a child who will leave them one day,” she said. “To do so, they need to be independent, have good self-esteem and have maximized functioning.”

For Four Decades, a Doctor’s Legacy of Life