The Pros and Cons of Air Power 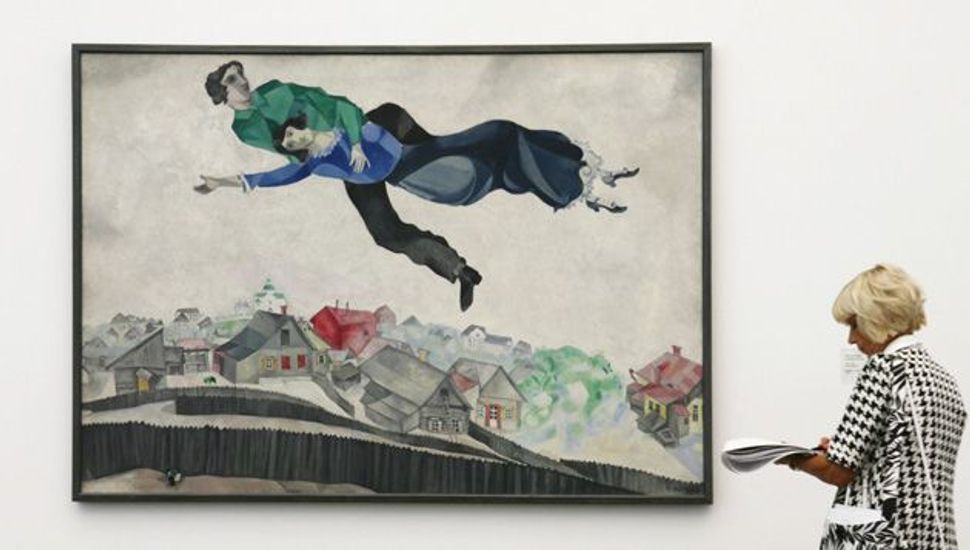 Just Floating an idea: In 2006, Germans had a chance to see Chagall?s artistic reappropriation of the luftmentsh as portrayed in ?Over the City?s Roofs? at the Frieder Burda museum in Baden-Baden. Image by MICHAEL LATZ/AFP/GETTY IMAGES

“Could you explain the origin of the Yiddish word luftmentsh? How is it possible that by joining two common German words, *Luft *(air) and *Mensch *(man, human being), one gets a Yiddish but not a German word?”

It is, of course, perfectly possible for two Germanic words to be compounded in Yiddish as they are not in German itself, thus producing a brand-new word. But is this the case with luftmentsh? It seems likely that the word started out as a German one after all.

A luftmentsh *in Yiddish (the best colloquial English translation might be “airhead,” since an “airman” is an aviator) is a person of impractical nature who lives more in vague hopes and unrealizable plans than in social and economic realities and — however intelligent or charming he may be — is never able to make a go of it. Although one doesn’t have to be Jewish to be a *luftmentsh, *as far as Jews were concerned it definitely helped. The *luftmentsh was generally conceived of not only as a Jew, but also as a representative of a large group of late 19th- and early 20th-century Eastern European Jews who, ousted from their traditional breadwinning roles by industrialization and the growing competition of non-Jews, lived on the economic margins, scrambling for a living without notable success, while consoling themselves with unfulfillable dreams of something better. No one was more adept at describing the lives of such *luftmentshn *than Sholom Aleichem, and no fictional character of his is more quintessentially *luftmentshlikh *than his Menachem-Mendl, of whom Sholom Aleichem’s son-in-law Y.D. Berkovitz once wrote:

“He [Menachem-Mendl] is a symbol of an entire collective, a special class of Jews who go through life without real ground beneath their feet. Their livelihoods are made of air, the structures they build are built on air, their thoughts and fantasies float in air, and their whole existence in this world is an airy one that blows away in the first strong wind.”

Yet to the best of my knowledge, Sholom Aleichem, who wrote his Menachem-Mendl stories between 1892 and 1910, never actually used the word luftmentsh *to describe Menachem-Mendl or anyone else. Not only that, but the first documented use of the word that I am aware of is in German and not in Yiddish. It occurs in an address given by the Zionist leader, author and intellectual Max Nordau at the fifth Zionist Congress, held in Basel in 1901, in which Nordau spoke of the “Luftmensch” as a distinctly Jewish type that only Zionism, which would return the Jew to the soil and productive labor, could eradicate. “Viele Luftmenschen ergeben zusammen ein Luftvolk,*” Nordau declared in German, “Many air-persons make an air-people.” In an essay composed a few years later, the Anglo-Jewish author Israel Zangwill wrote:

“If the Jew, by not living the life of the nations, but living in a Biblical dream-world of his own, escaped the feudal point of view with its dispiriting consequences on the fortunes of the lower classes, this peculiar aloofness prevented the dreamier section from ever facing the realities of life. A class of beggar-students and rabbis and nondescript Bohemians was evolved, who still haunt the Ghettos of the world from New York to Jerusalem. ‘Luftmenschen’ Nordau has ingeniously styled these airy tribes who look to miracles for their daily food, and scan the horizon for provision-bearing ravens.”

Born in London to immigrant parents from Russia, Zangwill grew up speaking Yiddish. If he attributed the coining of Luftmensch *to Nordau rather than considering it an older Yiddish word, presumably he can be trusted. Nor is it any wonder that *luftmentsh should quickly have entered Yiddish after Nordau’s invention of it, for present at the congress in Basel were hundreds of Eastern European delegates who would have taken it back with them to their native districts, in which its aptness would have been recognized.

In German, on the other hand, the word had a sadder fate. It was eventually appropriated by the Nazis, for whom the Jews were a *Luftvolk *in the worst sense — a rootless, decadently cosmopolitan people of social and economic parasites. Whereas a *luftmentsh *can be endearing despite his faults, a *Luftmensch — *the German word — can be held only in contempt. The word was ultimately stricken from German dictionaries as part of the linguistic de-Nazification campaign after World War II.

In contemporary American English, by contrast, the word has been upgraded in recent years, its positive qualities stressed. A blogger for a possibly one-member organization called The Luftmensch Liberation Front, for example, recently posted this manifesto:

“Do you find yourself incapable of solving the ‘normal’ life problems…? Do you seem to march to your own drummer but find that very few people can follow you or understand what you are really saying unless you play their roles, compromise and conform? No worries here: these are probably the signs of Luftmenschness and not social or psychological pathology…. So be a Luftmensch, friend, be yourself and be proud of it. We are free, we are many.”

Such an American luftmensch is more a Generation X misfit than a Menachem-Mendl.

Questions for Philologos can be sent to philogos@forward.com

The Pros and Cons of Air Power