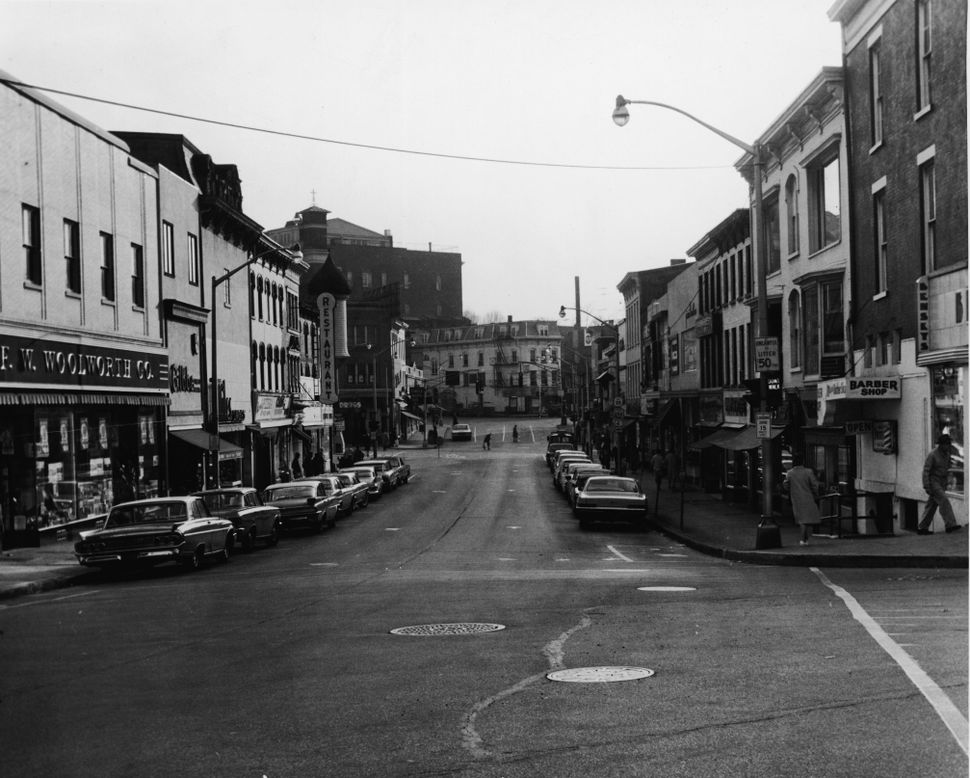 Downtown Peekskill in the 1960s. Image by Frederic Lewis/Getty Images

Peekskill, New York, on the bank of the Hudson River, was home to L. Frank Baum, the author of “The Wizard of Oz,” who apparently spent part of his youth in Peekskill — as did Mel Gibson, Paul “Pee-wee Herman” Reubens, and former New York governor George Pataki, who has lived there for essentially his whole life and who served as its mayor — and knew of a local yellow brick road that inspired him to write.

Yet Peekskill’s accomplished natives are only part of its history, one of the most notable parts of which was a stain on post-war America. There are probably not many people alive today who remember it; perhaps long-time, aging residents or scholars of American social or musical history. It is a story of terror, a cautionary tale for an America in which vituperation barely tries to pass for civilized discourse.

It happened exactly 70 years ago, beginning on August 27, 1949. The prominent black singer and actor Paul Robeson, along with other artists such as Woody Guthrie, Lee Hays and Pete Seeger, was scheduled to give an open-air concert in Peekskill. This was not the first time that Robeson was to appear in the Peekskill area. Indeed, it was to be the fourth Robeson concert in as many summers. The nearby Mohegan Colony, a cooperative community that served as an experiment in egalitarian living and child rearing, had hosted the concert in 1946. In 1947, the site was Peekskill Stadium, and in 1948 it was in nearby Crompond.

But 1949’s concert would be different. Guthrie, Seeger and Hays were all prominent leftists, as, famously, was Robeson. In the years following World War Two, his politics had moved farther to the left, as he used his considerable public voice to protest fascism, as well as the American failure to fully integrate its society in the aftermath of the war, in which so many black servicemen had given their lives. Two months before the concert, Robeson had said at the Paris Peace Conference: “It is unthinkable that the Negro people of America or elsewhere… would be drawn into war with the Soviet Union,” because it was the only nation in the world to outlaw race discrimination. As anti-Communist agitation grew in America, so, too, did the rage against Robeson’s perceived Communist loyalties. The slur was common: Robeson owed allegiance to the Soviet Union. Apparently, in a contest for thickness and thoroughness, Robeson’s FBI file would have put John Lennon’s to shame.

The demography of Peekskill and its neighboring northern Westchester communities was mixed. On the one hand, there were the summer people and weekenders, many of whom were middle-class Jews with left-of-center leanings. On the other hand, there were the year-round residents, mainly working class and conservative, whose resentment, and even open hostility to the “summer people” had been steadily growing.

Because of Robeson’s politics, local groups in Peekskill had railed against the very idea of the concert as un-American. An August 23 editorial in The Peekskill Evening Star stated that the “illustrious name of Paul Robeson” was “now almost hidden by political tarnish.” The American Legion post in the nearby hamlet of Verplanck, the Veterans of Foreign Wars, the Catholic Veterans and the Jewish War Veterans announced that they would picket the concert. The Peekskill Joint Veterans’ Council called for a peaceful demonstration, as did the Evening Star: “Violence? Absolutely not! Let such tactics remain elsewhere — in the trick bags of the un-democratic…”

But during the event, screaming local mobs blocked the entrance to the concert area and harassed concertgoers. The veterans’ groups paraded along the highway, automobile horns blared and bands played. Attackers screamed: “We’re Hitler’s boys — here to finish his job.” A crowd of drunken locals attacked the people who were setting up for the concert. One of their leaders, according to journalist Howard Fast, was a prominent businessman in Peekskill.

The mob increased to 500, then to 1,000. A little after eight o’clock in the evening, the attackers burned a 12-foot cross on the picnic grounds. From burning a cross they progressed to burning books, sheet music and chairs, while the performers and concert-goers, arms linked together, sang such songs as “The Star-Spangled Banner,” “God Bless America” and “Solidarity Forever.” The concertgoers, artists and organizers tried to defend the concert site, but by the time the evening was over, every defender had been injured.

Afterward, a wave of hatred and panic spread through northern Westchester. Up and down the Hudson River towns, signs and bumper stickers appeared: “Wake Up America — Peekskill Did!” “Communism Is Treason. Behind Communism Stands — the Jew! Therefore, for my country — against the Jews!”

Vacationers and weekend visitors fled — many forever, abandoning the area as a vacation spot because of the outbreak of “fascist influences.” A summer colony in the area organized a round-the-clock vigil against outside attack. Local Jewish residents were terrorized; it was, according to some, like living through a pogrom.

Apparently undeterred, the organizers re-scheduled the Robeson concert for Sunday, September 4. It was to be held at two o’clock in the afternoon at the Hollow Brook Country Club, about a half-mile from the earlier concert site, three miles northeast of Peekskill. 25,000 people attended. Many of them were trade union members; about 40 percent of the crowd was women, and one local resident estimate that about 80 percent were Jews.

The program opened with music by Liszt, Mozart, Bach, Verdi and Chopin. Then, Guthrie, Seeger and Hays appeared, singing American folk songs and topical songs. Then, Robeson came on, singing a medley of songs ranging from Spanish Civil War melodies to civil rights anthems. He performed the last aria from “Boris Godunov,” and finished up with his famous rendition of “Old Man River.”

The concert ended at around four o’clock in the afternoon. As cars and buses started to depart from the concert grounds, police routed the vehicles through the northern Westchester woods and up a steep, winding road. There, crowds of men and boys were waiting. As if on cue, they hurled rocks at the vehicles. More than 50 buses and countless cars had their windows smashed; at least 15 cars were overturned. Bus drivers abandoned their vehicles and fled on foot, leaving about 1,000 of their passengers stranded.

The violence overflowed even to people who had not attended the concert. Some men and boys attacked a bus traveling along the highway; its passengers were black people on their way back to New York from a field trip to visit the Roosevelt home in Hyde Park. At least 150 people were injured badly enough to warrant medical attention.

“I hear the wails of women, the impassioned screams of children, the jeers and taunts of wild-eyed youths. I still smell the sickening odor of blood flowing from freshly opened wounds, gasoline fumes from autos and buses valiantly trying to carry their loads of human targets out of the range of bricks, bottles, stones, sticks.”

Years later, Pete Seeger would meet a young man folk singer who admitted to the elder statesman of American folk music that his father had been a police officer in Peekskill. The young man told Seeger: “You know, that riot was all arranged by the Ku Klux Klan and the police… They had walkie-talkies all through the woods. They had that place surrounded like a battlefield.”

The hatred that fueled the Peekskill riots became contagious, even entrepreneurial. Bill Hendrix, a Klan activist in Tallahassee, used it to extend his newly created empire, the Original Southern Klans, Inc., which had split off from the Association of Georgia Klans. The Associated Press quoted him as saying that the Peekskill violence was “only the beginning. The crosses will begin to burn north of the Mason-Dixon Line tonight… as soon as the order gets through.” He lost no time. On the night of the Peekskill concert, six burning crosses had already appeared in Tallahassee. Each cross had a sign on it: “We protest Paul Robeson and Communism.”

James Edward Smythe, chairman of the Protestant War Veterans of the United States, Inc., who had been accused of Nazi collaboration in 1944, warned that the “Jewish race has worn out its welcome in this country” and that “some of your highest officials and big business executives” in Westchester would join the Klan in its fight against “Judeo-Communism.”

The riots contributed to a small but significant chapter in American political history. Former vice-president Henry Wallace had run for president on the leftist Progressive Party ticket in 1948, with Robeson and Seeger’s help. Shaken by the riots, and afraid that the Progressive Party had drifted too far to the Left, Wallace left the party, and it soon folded. Moreover, the Peekskill riots would become the musical prelude to the anti-Communist career of Senator Joseph McCarthy. Within a few months of the riots, McCarthy would raise the specter of Communist infiltration into the State Department: a haunting fear whose repercussions and implications would last for decades.

Now the riots are mainly remembered in folk music history. Pete Seeger immortalized the event in the song “Hold The Line”:

Let me tell you the story of a line that was held,
And many brave men and women whose courage we know well,
How we held the line at Peekskill on that long September day!
We will hold the line forever till the people have their way.

In several significant ways, the memory of Peekskill gives us pause. It reminds the Jewish community that we and the black community have always had common enemies. It reminds us of the naïve Communist flirtations, and more, of the old Left — flirtations which led some to embrace Stalin and to only begrudgingly, if ever, denounce his homicidal policies.