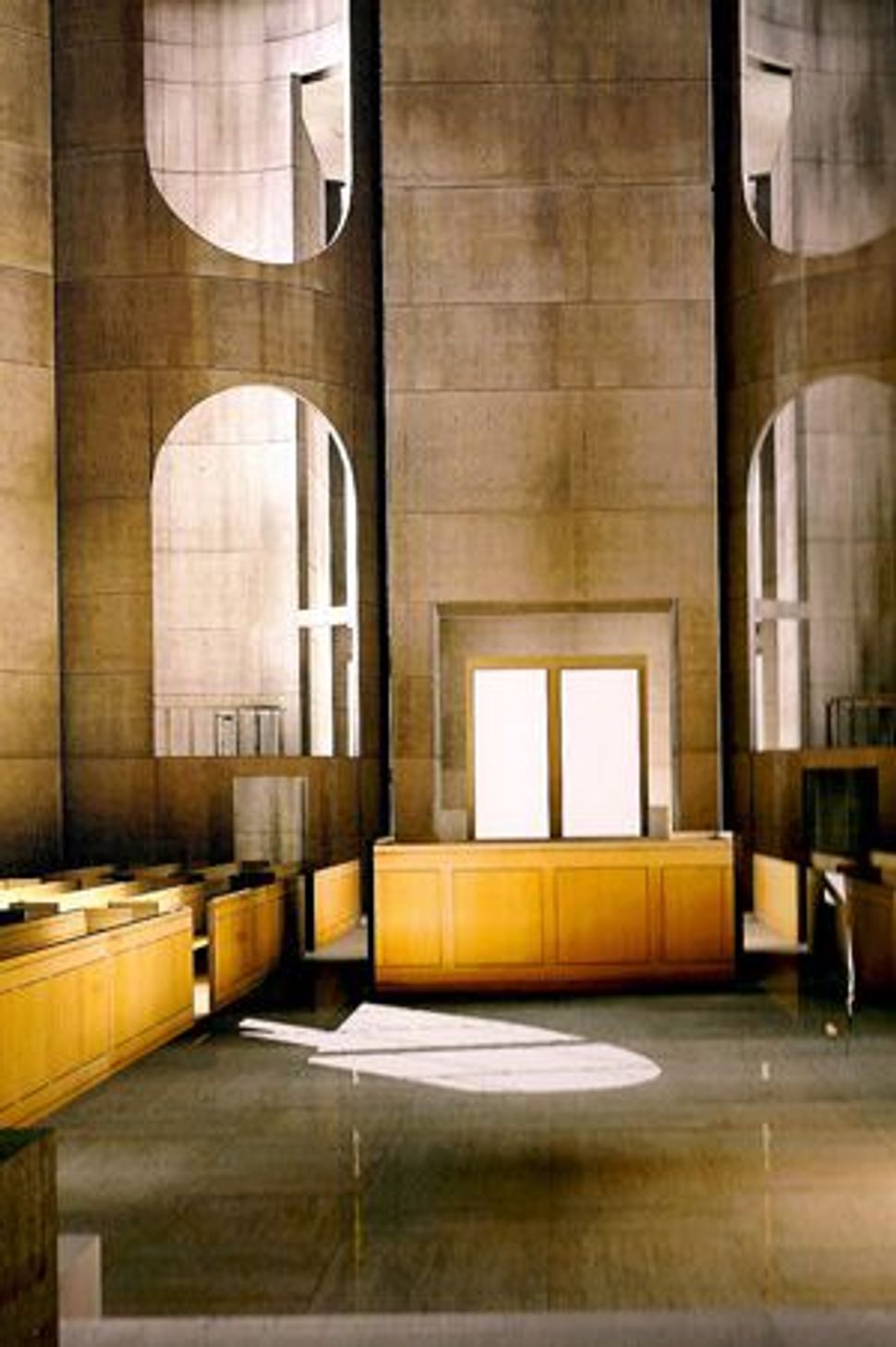 A Virtual Glimpse of Mikveh Israel: Solomon?s book considers the impact of synagogue designs by Kahn. In ?Louis I. Kahn: Unbuilt Masterworks? (Monacelli, 2000) architect and MIT professor Kent Larson built images of Kahn?s unrealized projects, including this one. Image by COURTESY OF KENT LARSON 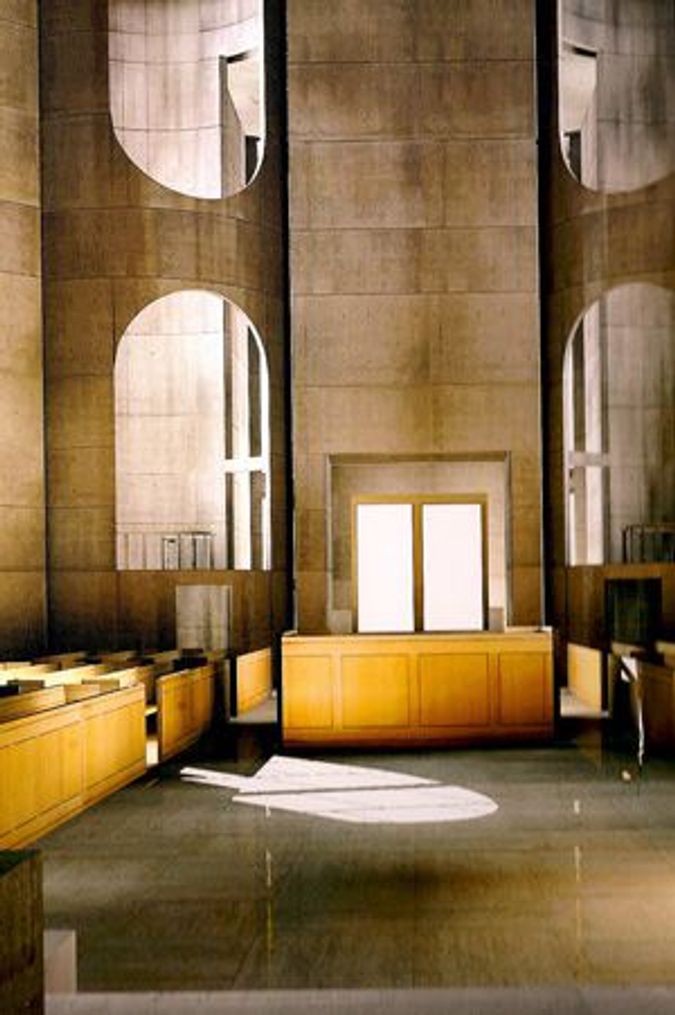 A Virtual Glimpse of Mikveh Israel: Solomon?s book considers the impact of synagogue designs by Kahn. In ?Louis I. Kahn: Unbuilt Masterworks? (Monacelli, 2000) architect and MIT professor Kent Larson built images of Kahn?s unrealized projects, including this one. Image by COURTESY OF KENT LARSON

Long regarded as one of the most influential architects of the 20th century, Louis Kahn has become the focus of renewed popular attention. The Oscar-nominated documentary film “My Architect” (directed by his son, Nathaniel Kahn, in 2003) earned applause for its gripping portrayal of the family tensions caused by Kahn’s extramarital affairs, and recent monographs by Sarah Williams Goldhagen and Carter Wiseman have earned scholarly praise for their investigations of Kahn’s architecture. Now comes Susan Solomon’s welcome new book, which takes yet a different approach to the work of one of the modern movement’s undisputed masters.

As is made clear by the book’s title, Solomon’s focus is not on Kahn’s well-known secular designs, but on his work for Jewish clients, specifically the Philadelphia congregation Mikveh Israel. In the early 1960s, Kahn produced a series of dramatic designs for the congregation’s projected new home on Independence Mall. In the most famous version, from 1962, Kahn presented a striking composition of 10 hollow, brick-clad, cylindrical towers arranged in an octagonal plan, which stood adjacent to an adjoining chapel and school. Kahn intended the towers, which were cut with upright as well as inverted arches, to bring indirect light into the central sanctuary and produce an aesthetic effect that would be “subtle, deep, and emotional.” Unfortunately for Kahn (and his many fans worldwide), the project was never realized, a failure that Solomon attributes to the congregation’s unrealistic and impractical financing plans.

“Louis I. Kahn’s Jewish Architecture,” however, is hardly a mere tale of an unbuilt design. Solomon deftly uses the case of Mikveh Israel to reflect on the history of early postwar American synagogue architecture more broadly and on its significance for postwar American Jewish social aspirations. Solomon convincingly describes how American Jewish congregations (mostly Reform and Conservative) swiftly embraced modernist synagogue design in the years after 1945. She discusses the work of such well-known architects as Frank Lloyd Wright and Philip Johnson, as well as lesser-known figures, such as Pietro Belluschi and William Wurster, praising their designs as innovative in conception (especially their interior use of modern decorative art) and inspiring in effect.

She goes on to argue, however, that by the early 1960s, the field of synagogue design had become defined by a sense of “decline.” It was at this point that Kahn’s plan for Mikveh Israel held out the promise of creative revival. This promise was not realized in Kahn’s lifetime, but Solomon believes it retains the capacity to be an “iconic paradigm… for synagogue designers” and to “jolt” the profession out of its current “moribund state.”

Solomon is admirably thorough in discussing Kahn’s place among early postwar synagogue designers, but her short book unavoidably raises more questions than it can answer. Its very title, by invoking the thorny concept of “Jewish Architecture,” begs all kinds of questions involving the ways in which buildings can be — if at all —“Jewish.” Does a building’s Jewishness lie in its form, its function, its designers’ personal background, its clients’ program? Solomon does not explore these questions in much detail, and so it remains difficult to glean exactly how Kahn injected “Jewish content.”

To be sure, Solomon has a difficult task, for Kahn was rarely explicit in discussing the Jewishness of his synagogue designs. When he did, moreover, he was often elliptically mystical — as when he declared (in reference to his 1954 design for the Philadelphia congregation Adath Jeshurun) that the “synagogue is a spirit continually expressing what it wants to be… a place to meet under a tree.”

Given the opacity of Kahn’s views on Judaism (he was personally nonobservant and tended toward pantheism), other realms of postwar Jewish life may hold the key to understanding his work’s Jewishness. One possible realm implicitly suggested by Solomon is the Holocaust. In contrast to Hasia Diner, who maintains that American Jews actively wrestled with the Holocaust’s legacy in the early postwar decades, Solomon suggests that there was little such confrontation in postwar American synagogue architecture.

Marked by silence from the members of Congregation Kneses Tifereth Israel in Port Chester, N.Y., toward the Nazi past of their synagogue’s architect, Philip Johnson, and in the failure of architects Eric Mendelsohn and Percival Goodman to realize a Holocaust memorial on the Upper West Side of Manhattan in the late 1940s, the legacy of the Nazi genocide does not seem to have found much echo in early postwar Jewish architecture.

This absence, however, began to change with Kahn. His precise views on the Holocaust are unknown but there are intriguing signs that he was becoming re-sensitized to its legacy around the same time that he began to design Mikveh Israel. Kahn paid close attention to the Eichmann trial in 1961–62 (a fact suggested by the presence of multiple news clippings on the trial in his papers at the University of Pennsylvania). A few short years later, in 1966, he spent considerable time designing a Holocaust memorial in Manhattan’s Battery Park. (Solomon discusses this project at length in her doctoral dissertation, though not here.)

Moreover, Kahn’s only realized synagogue, for congregation Beth El in Chappaqua, N.Y. (1966–72), was inspired by the architecture of early modern Polish wooden synagogues (most of which were obliterated by the Nazis). And his famous monumental design for the Hurva Synagogue in Jerusalem (1967–74) was inspired partly by his reflections on ruins. The possibility that the Holocaust’s legacy had an impact on Kahn’s architectural thinking remains conjectural for now, but eventually it may provide another perspective on the “Jewishness” of Kahn’s work.

Gavriel Rosenfeld is associate professor of history at Fairfield University. He is writing a book on Jewish architecture and the memory of the Holocaust.