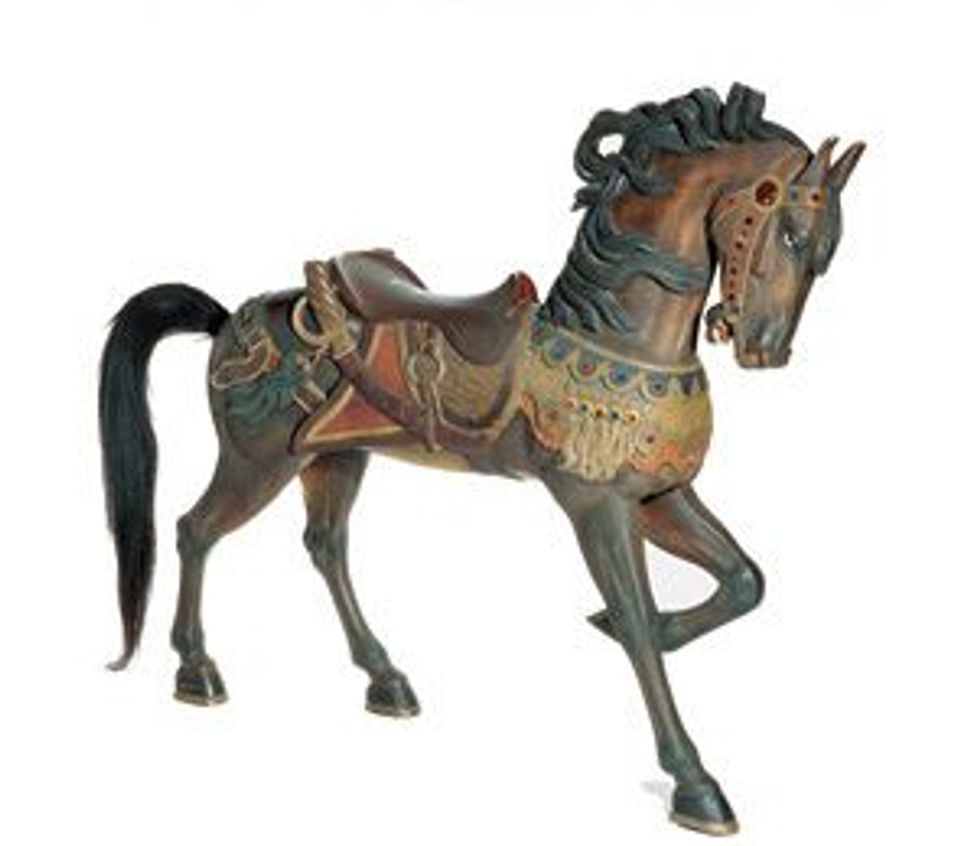 The focus of the exhibit is a parade of a dozen carousel animals created by Yiddish-speaking immigrants. These men are now creditedwith introducing the lifelike style that came to be associated with Brooklyn's Coney Island - and spread from there.

Within the folk art field and even among Judaica scholars, Jewish folk art has been given short shrift — relegated, sadly, to religious artifact. Unlike Shaker or Mennonite contributions to the field, “the word ‘Jewish’ never entered the vocabulary,” said Murray Zimiles, an artist and a State University of New York professor. 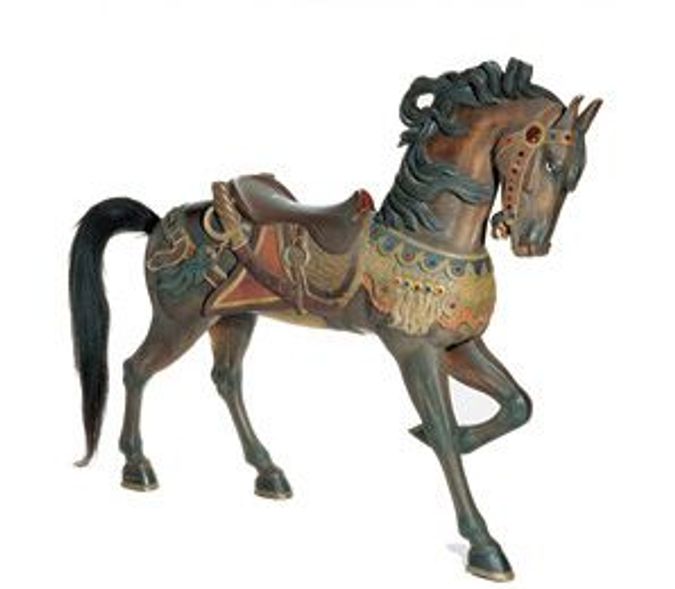 The focus of the exhibit is a parade of a dozen carousel animals created by Yiddish-speaking immigrants. These men are now creditedwith introducing the lifelike style that came to be associated with Brooklyn's Coney Island - and spread from there.

Zimiles labored 12 years to repair this record, and the result is “Gilded Lions and Jeweled Horses: The Synagogue to the Carousel,” which premiered in New York earlier this month at the American Folk Art Museum. The exhibition, which features a dazzling menagerie of carousel animals, reveals the surprising link between Eastern European Jewish craftsmanship and a quintessentially American art form. And, thanks to Zimiles and senior curator Stacy Hollander, this isn’t even the most significant offering in this sweeping show. More compelling are the groundbreaking presentation of Judaic ritual objects within a broader artistic context and the case for a rich Jewish visual heritage, captured in black-and-white photographs of synagogues and gravestones in Poland, Russia and Romania, as well as some 20 wooden carvings of Torah arks and probably the largest assemblage ever of Jewish papercuts.

Zimiles was initially fascinated by Europe’s lost wooden synagogues, with their modest fronts and majestic, polychrome interiors. His scope expanded after he discovered a dusty pair of carved wooden lions flanking a Decalogue in the corner of a Warsaw synagogue and was encouraged by Gerard Wertkin, the museum’s director at the time, to explore this neglected material.

“It’s criminal that I can’t show my son his heritage,” Zimiles said, attributing the dearth of cultural patrimony not only to the destruction of European Jewry but also to the suburbanization of American Jews, whose abandoned synagogues were often converted into churches. The exhibition attempts to restore this legacy, in the process debunking simplistic notions of Jews as “the People of the Book.”

This argument is rooted in elaborately carved, painted and gilded wooden arks that were the focal point of Eastern European synagogues, and it is echoed in hand-carved stones piled together in rationed quarters of Jewish cemeteries. Both are only represented here photographically, but the dramatic images attest to multilayered and often symbolic imagery, incorporating mythical and biblical animals, crowns, flowers, fruit and foliage. The four-tiered, 17th-century Olkienniki ark in Lithuania, for example, features a flower-filled amphora atop a celestial crown that is perched over the double-headed eagle of the royal family, and below that a Decalogue teeming with griffins, unicorns and Leviathan.

Nearly identical motifs appear in the intricate papercuts, made by symmetrically puncturing pictorial designs into folded paper. The most common forms are mizrach, hung in homes to indicate the easterly direction of prayer, and shviti, a meditation on the meaning of God mounted next to the synagogue lectern, though these were also made to celebrate holidays, and were given as gifts and sold by peddlers. Despite being the only nonsculptural works here, they form the most concrete bridge between the old and new worlds. Poland, a center of Jewish papercutting in the second half of the 19th century, is well represented, but the art seems to have been as prevalent in New York, Chicago and Milwaukee as it was in Bavaria, Lithuania and Ukraine.

Among the show’s subtle but keen revelations is the kinship between the grandly carved wooden arks and minutely pierced paper designs, particularly the way light passes through them. A case in point is the work of Abraham Shulkin, a Polish immigrant who settled in Sioux City, Iowa. Shulkin mastered both media. His 1910 shviti, stained to resemble wood, is on display along with a photo of an ark with shared iconography that he made for the local Jewish community. It makes sense that papercuts survived in sizable numbers; given their medium and scale, they are relatively easy to afford, salvage and transport. But, remarkably, as the tradition flourished in the United States through the early 20th century, it remained intact, continuing to draw from a vast wellspring of fantastical visual imagery rooted in centuries of folklore.

This is not the case for the American arks on display, in which the imagery is radically reduced to a few key elements, most notably lions — almost always gilded and boasting faces full of character — as well as the Decalogue, priestly hands, eagles, flowers and crowns. Zimiles offers up an explanation: that European arks alluded to messianic dreams of salvation, and once Jews found freedom and prosperity in America, “they no longer had to focus on the future.” The Lion, he speculates, was a strong but straightforward symbol for a Jewish people that could finally “accept the here and now.” They did, however, faithfully transport their skills and artistry. As Hollander states emphatically, “These carvings deserve to be seen as major examples of American sculpture.” But the show doesn’t adequately explain why Jews would abandon such a rich and ancient cache of religious imagery.

And from here, it dives into the secular, noting the goods Jewish craftsmen carved for the burgeoning consumer classes, from combs and furniture to cigar store figures. But the focus is a parade of a dozen carousel animals by Marcus Charles Illions, Solomon Stein, Harry Goldstein and Charles Carmel — all Yiddish-speaking immigrants from Russia who are credited with introducing the lifelike style that came to be associated with Brooklyn’s Coney Island and spread from there. The show powerfully demonstrates the critical role they played in revolutionizing the industry, creating exuberant figures with muscular bodies, wild eyes, flared nostrils, disheveled manes, lolling tongues and even bad teeth, and embellishing the vigorous horses with gilding, bold paint and lush ornamentation.

Illions is the only one documented to have a foot in both the sacred and secular worlds. He created at least four arks for Brooklyn synagogues, and a photo of Illions in his Coney Island workshop shows an ark pediment of lions and a Decalogue hanging over the doorway, near sketches of a tiger and a lion. But all these men came from Orthodox backgrounds and, at various points, worked together; there is a wonderful story about how their gentile boss threatened to fire them if they wouldn’t work on the Sabbath, but then realized he couldn’t replace them.

Hollander maintains that “the fact that some of them ended up in an industry as American as apple pie is icing on the cake,” stressing instead that “Jewish carvers came from shtetl communities with unique skills and diffused their shared background and ideas around the country.” The common denominator is a fiery expressiveness, made explicit in the two more unusual carousel figures: a lion by Illions whose tail stands erect in the same position as that of his ark lions, and a dragon by Carmel bearing strong resemblance to the mythical, mystical Leviathan. The similarities here are striking, and it would have been nice to see a broader array of creatures and decorative elements so that other direct connections might be made between the synagogue and carousel. Elsewhere, each aspect of this ambitious exhibition could stand alone, — say, in a show on the intricate symbolism of common cemetery art, or to elucidate the ways in which Jewish immigrants influenced American woodcarving.

But Zimiles argues that it was essential to weave together this “magical story, at once Jewish and American,” and as Hollander suggests, it may be the very ways in which Jewish artisans applied their skills and, in turn, helped define what it means to be American that make this such a fascinating narrative. The hope is that this wealth of new scholarship will open the door to much more needed research. In the meantime, the expansive presentation should lure an array of visitors who will approach the material from different perspectives and see it with fresh eyes. Zimiles hastens to add, “Carousels always make people smile.”