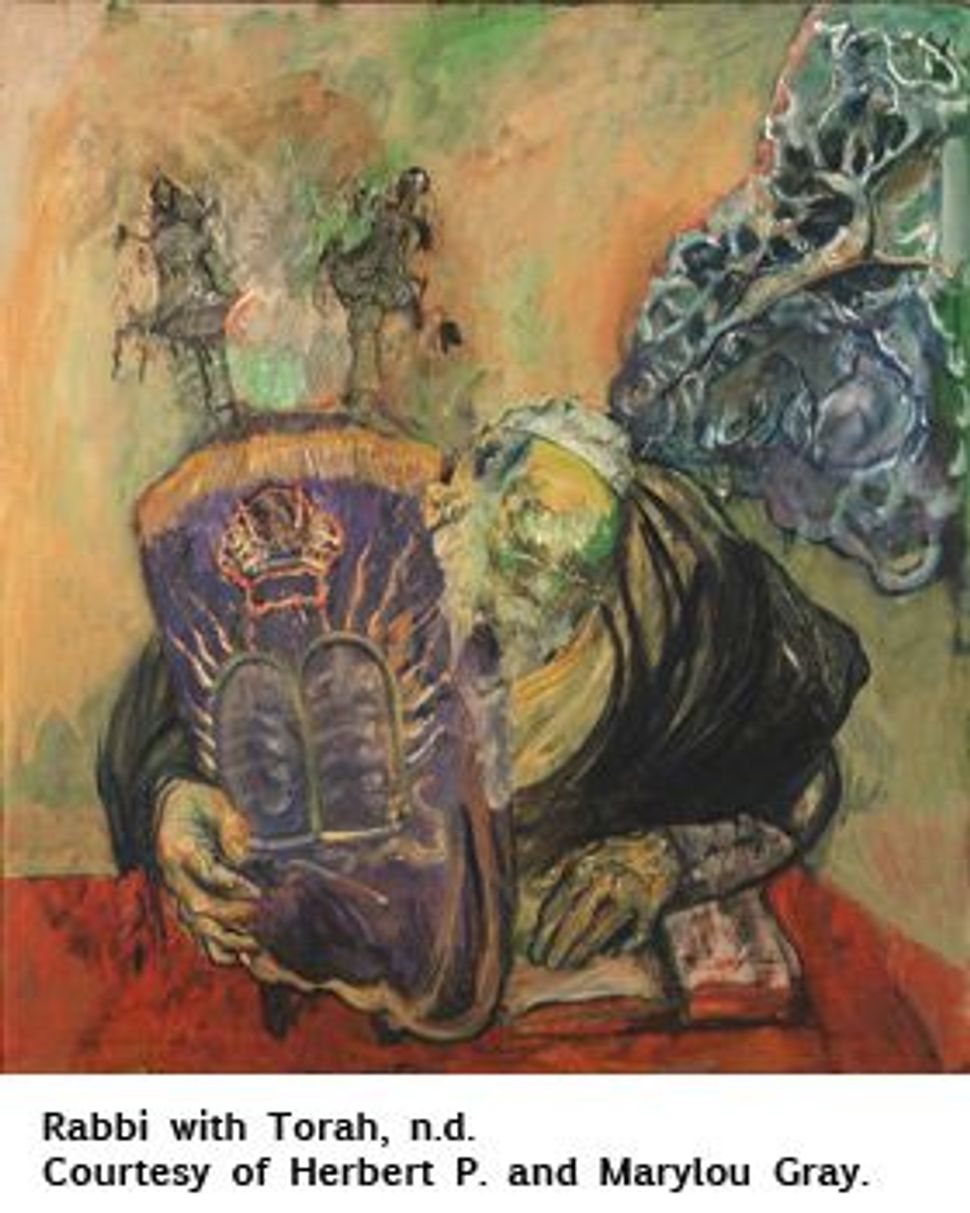 Art lovers have until January 24 to catch a compelling exhibit at the Yeshiva University Museum, “Hyman Bloom: A Spiritual Embrace.”

Originating at Massachusetts’s Danforth Museum of Art the show focuses on Bloom, one of the key Boston Expressionists examined in “Boston Modern: Figurative Expressionism as Alternative Modernism” by Judith Bookbinder (University of New Hampshire Press, 2005).

In tragically majestic, angst-ridden canvases, several entitled simply “Rabbi With Torah” (undated, cat. 48; c. 1995-2005, cat. 41; 1999, cat. 46) viewers can see a Jewish parallel to Francis Bacon’s “Three Screaming Popes.” Bloom’s painterly primal screams hardly lessen in power as the painter advances into great old age. Misprized early on by both admirers and detractors, Bloom was prematurely dubbed by critic Clement Greenberg as “America’s Greatest Living Painter” in the 1940s, while in the ‘50s, Hilton Kramer nastily commented that seeing Bloom’s work in a gallery was like “finding gefilte fish at a fashionable party…You can smell the pastrami.”

Both extreme appraisals missed the point. Born Hyman Melamed in Brunaviški, a Latvian village, Bloom emigrated with his family to Boston’s West End in 1920. There he was taught by the noted art instructor Harold Zimmerman, who stressed painting from memory, an approach which turned out to be ideal for an aspiring visionary like Bloom. Choosy about his friendships (Bloom’s closest ally and patron was the even longer-lived A. Stone Freedberg, Bloom was an ardent fan of hazanut, especially the famous cantor Pierre Pinchik, whose “Hassidic fervor” galvanized Bloom.

Ever in search of ecstasy, Bloom also studied Flamenco and Tibetan music, learned to play the sitar, and even took LSD. This offbeat mix made for unusual results, as his longtime art dealer Terry Dintenfass implied in an interview when she claimed that Bloom was the “most beautiful man I know in the whole world except for Ornette Coleman. He’s a very strange man.” Juxtaposing the innovative jazzman Coleman with Bloom rings true. Both created stunning riffs on familiar themes, rendering them strange and sometimes unsettling.

Watch below a trailer for a new short documentary, Angélica Brisk’s “Hyman Bloom: The Beauty of All Things.”