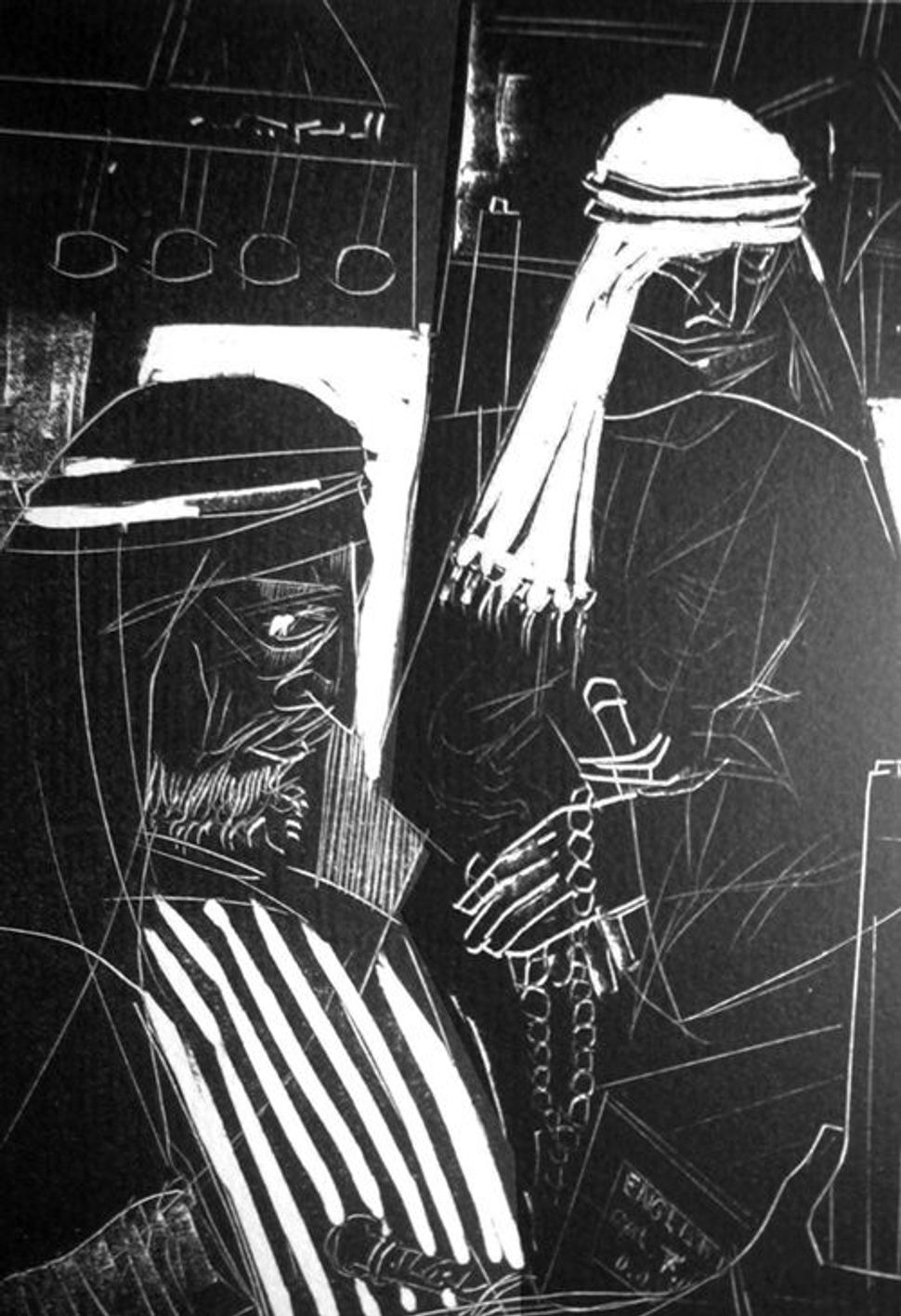 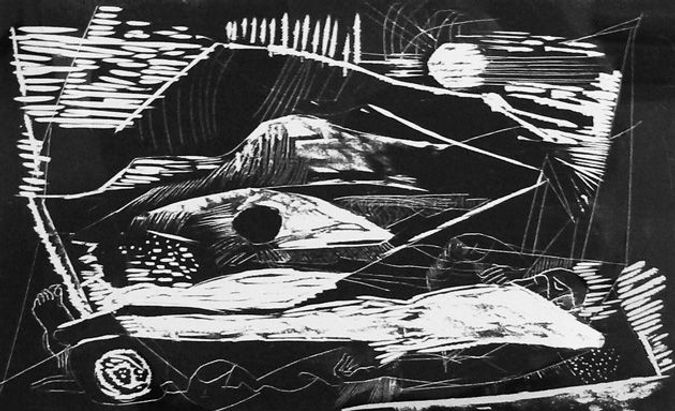 Even in self-imposed exile in France, Avigdor Arikha is one of Israel’s best-known artists. He is a master draftsman, a BBC lecturer on art history and a knight of the French Légion d’Honneur. In November, a painting of his library, called “Books,” fetched $134,000 at Sotheby’s annual New York auction of Israeli artists. So it is a surprise to find a rare complete set of his 18 wood prints, “Pages de Guerre — Israel 1948-1949,” on display at the corporate headquarters of grocery distributor Krasdale Foods in White Plains, N.Y. The man behind the exhibition is curator Sigmund Balka, a New York attorney and art collector who has staged more than a hundred innovative exhibits at the Krasdale Galleries over the past two decades. 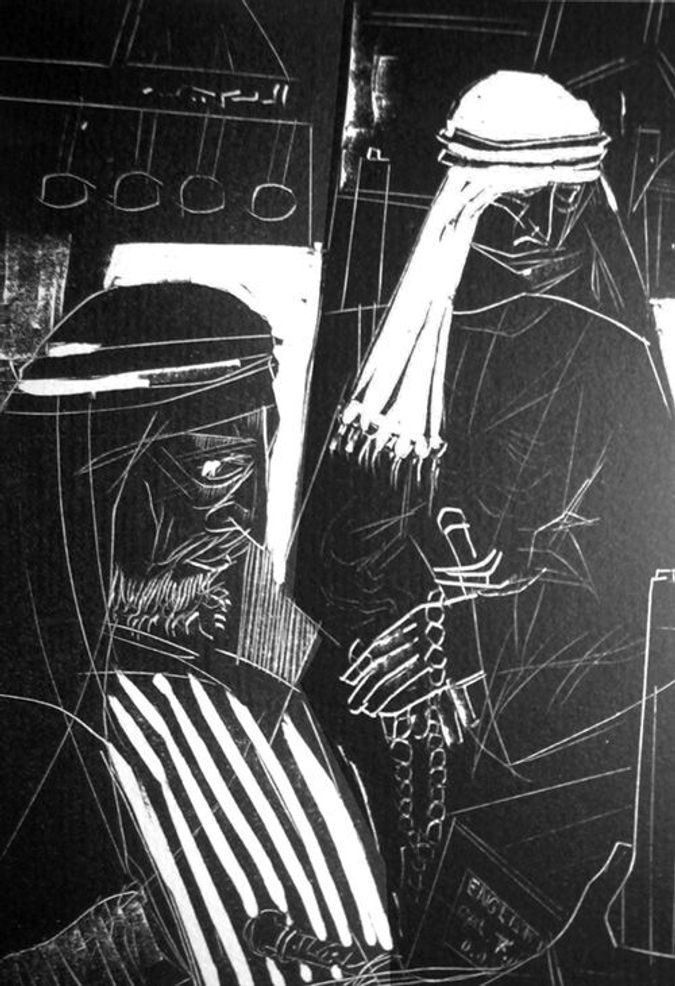 The Pages de Guerre series depicts Arikha’s experiences as a young soldier in Israel’s War of Independence. The suite of small (10 inches x 13 inches) wood prints on paper was made in 1950, when the artist was just 20 years old. The rare works provide a portrait of the artist as a young man, affording an early view of the eagle eye, fine draftsmanship and sensitivity to nuance and light that exemplify Arikha’s later work. “These early woodcuts by Avigdor Arikha are personal and very individual images of what he experienced,” says Jennifer V. Roth, senior vice president at Sotheby’s, adding that images of Israel’s War of Independence are highly sought after.

Born in 1929 in Czernowitz (Romania), an Austro-Hungarian outpost that was also home to poet Paul Celan and novelist Aharon Appelfeld, Arikha was deported to a concentration camp at age 12. Well before his wartime experiences, Arikha showed a precocious talent for drawing. His drawings of life in the camp, noticed by aid workers, helped save his own life. His drawing book was later published by Youth Aliyah in Israel. In 1944, Arikha was rescued by the International Red Cross and sent in a children’s transport to Palestine, where he lived on Ma’aleh Hahamishah, clearing fields for the then 5-year-old kibbutz and later studying art at the Bezalel Academy in Jerusalem. Recruited as a soldier in the War of Independence — a conflict so bloody it resulted in the deaths of one out of every 100 Jewish residents, mostly youth — Arikha was badly wounded en route to Jerusalem at Castel, a site of particularly deadly ambushes, barely escaping death.

Pages de Guerre is a “novel” in a sense not dissimilar to today’s more serious graphic novels. The 18 tableaux are varied, depicting a Jewish couple clutching their child; cows resting in a stable; an Arab man counting worry beads in the kitchen as a companion with a knife stands by; soldiers exhausted, alert, rushing by or wounded; a village in ruins; the rounded rooftops of a city defeated. Within the page, each small print is a different shape and size, representing a wide range of circumstances. Some are close-ups while others show a full scenario or landscape. Each, however, captures a scene where stillness covers a deep, roiling force. The wartime images are dark in both tone and spirit, with white lines carved into a black ground. Although suffused with suffering while his later drawings and paintings from life are almost Zen-like in their calm and lightness, the wood prints display Arikha’s particular, acute gaze. Art critic Barbara Rose commented: “It is almost as if Arikha has inverted the statement of conventional realism: ‘This is what I see’ becomes ‘Is this what I see?’ ”

Arikha described his works from the war period in a 1987 New Yorker profile by Dan Hofstadter: “This is the head of a combatant in the ’48 war. … My Soviet submachine gun. Piled Canadian rifles. This was during a bombardment — we’d been shooting out of a bunker window. Perhaps I understood even then: if you don’t draw from life, why do it?”

After the war, Arikha resumed his studies at Bezalel. He received a scholarship and studied at the Ecole des Beaux-Arts in Paris, the period

in which he made Pages de Guerre. In the early 1950s, he illustrated a number of books for Tel Aviv-based publisher Tarshish (some of these reside in the New York Public Library’s Dorot Division), including a Hebrew translation of Rainer Maria Rilke’s epic poem “The Cornet,” which won a gold medal at Milan’s X Triennial in 1954.

Although he maintains a home in Jerusalem, Arikha settled in Paris, where he would rise to international prominence. In the 1960s, he illustrated works by his close friend, the playwright and novelist Samuel Beckett (in the NYPL’s Berg Collection). “For him, art has to be moving — that’s the main thing,” said Arikha. “And I agree.” The two

got together several times each week for four decades until Beckett’s death in 1989. Arikha’s wife, Anne Atik, the subject of many of his paintings, has written a memoir of Beckett that includes illustrations by Arikha.

Following a brief period of abstract work, Arikha famously rejected abstraction in 1965 after seeing an exhibit of Caravaggio at the Louvre and returned to representational art. He focused for seven years on drawing before painting again in the 1970s. He works solely in natural light, making each painting in a single sitting and completing it the same day. His mature work is shimmering, evanescent and deceptively simple, featuring objects in his studio and home and portraits of his wife, daughters and friends (in addition to commissioned portraits of England’s Queen Mother, actress Catherine Deneuve and other luminaries).

One of the few Israeli artists to garner an international reputation, Arikha has had solo exhibitions in such venues as the British Museum, Museo Thyssen-Bornemisza, Scottish National Gallery, Corcoran Gallery, and Marlborough Galleries in New York and London, among many others. A major dual exhibition in 1998 featured his paintings at the Israel Museum in Jerusalem and his drawings at the Tel Aviv Museum of Art.

In addition to providing a sensitive depiction of the ravages of war, the Pages de Guerre series is “highly technical in quality and very humanistic in feeling, amazing for a young man just starting out and auguring a wonderful career,” says curator Balka.

Writing about Arikha’s work in a 1979 essay in Time magazine, critic Robert Hughes wrote: “Supremely honest, unrhetorical painting, it breathes the air of scrupulous anxiety…. His images are not meant to soothe or win the eye but to build up a record of their action through a labyrinth of nuances.”

Malka Percal writes about art and culture. She lives in New York.