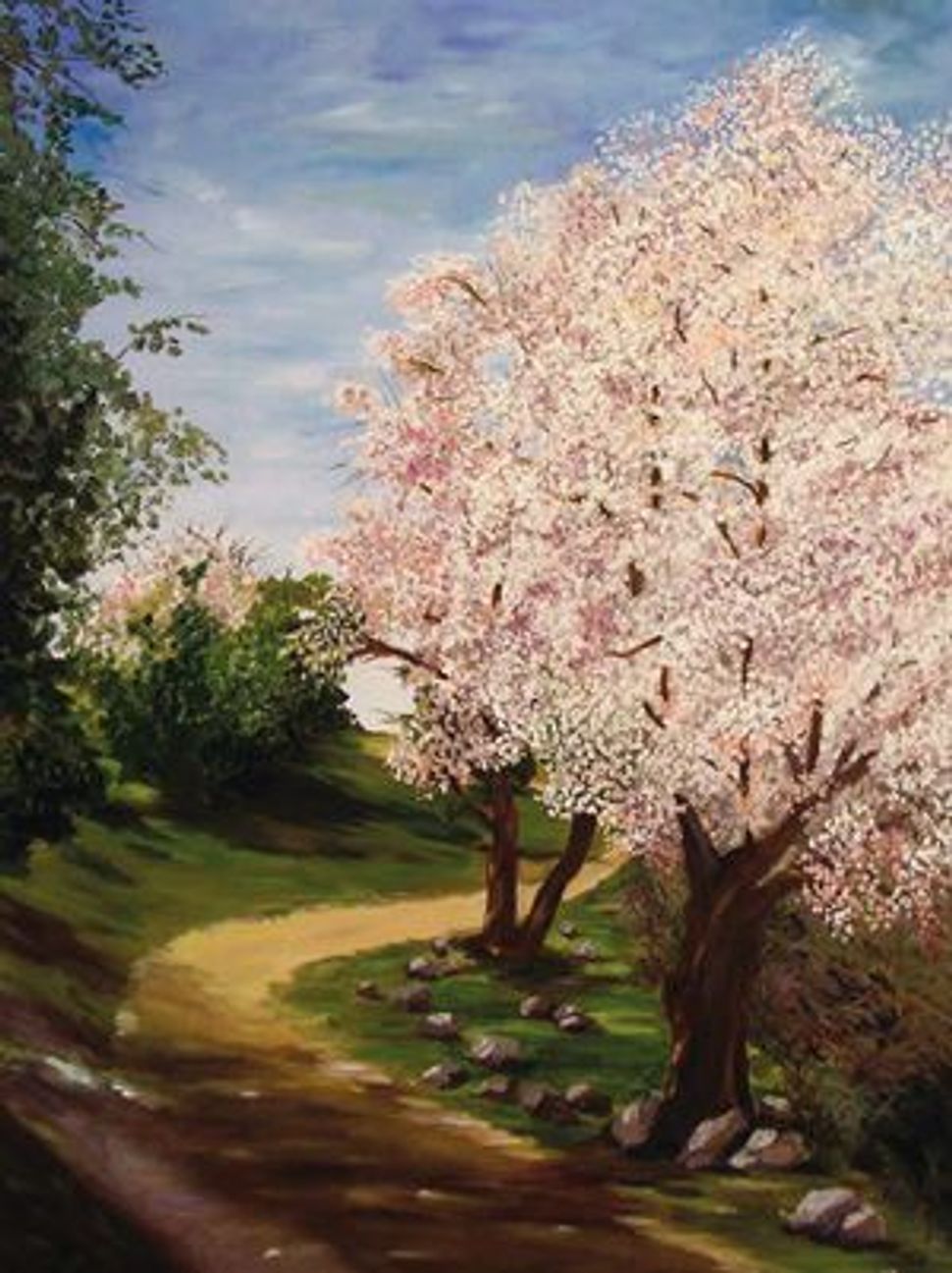 Spring: If the almond tree is blooming, can the golden sun be far? Image by ?Almond trees at Haruvit forest? Yaffa Wainer

Growing up on the snow-swept banks of Lake Ontario, I experienced the celebration of Tu B’Shvat as the triumph of hope over reality. The rebirth of vegetation was banished to the dark recesses of a damp bathroom closet, where we would try to get lima beans to sprout. If, by some miracle, the mold did not suffocate the potential for growth, the lack of sunshine that inevitably met the seedling upon transport from the recesses of the bathroom often meant a morbid end. 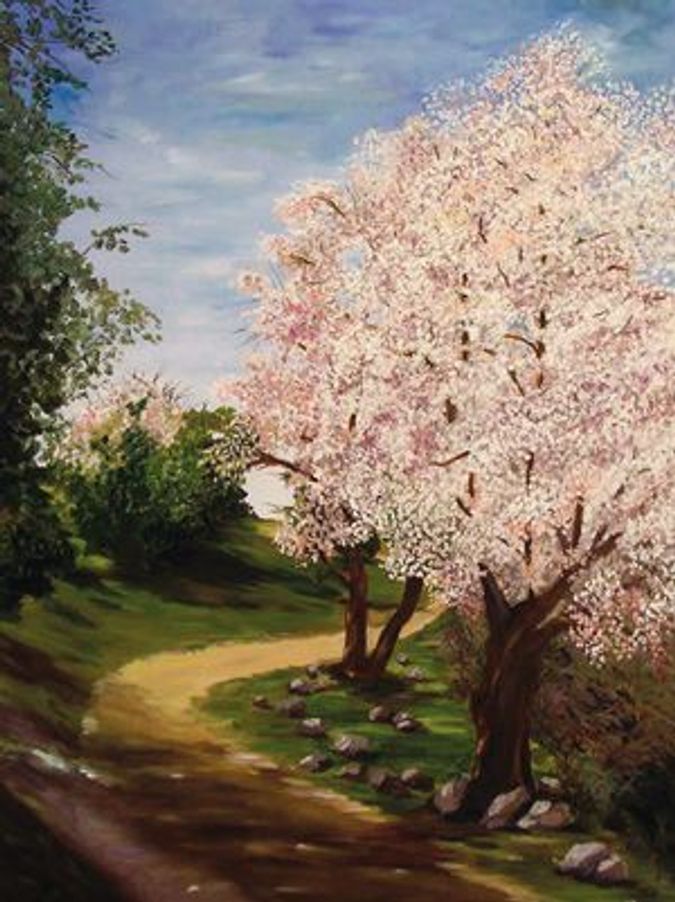 Spring: If the almond tree is blooming, can the golden sun be far? Image by ?Almond trees at Haruvit forest? Yaffa Wainer

That Tu B’Shvat did not fall to the same fate is worthy of note. The antiquity of Tu B’Shvat was by no means a guarantee of its survival.

And while we still set the Jewish calendar by this date, the first of Tishrei is better known for the repentance and re-evaluation of Rosh Hashanah than for fiscal and administrative accounting.

Like the trees it celebrates, Tu B’Shvat benefits from being both firmly grounded in Jewish tradition as well as flexible enough to withstand the changing winds of interpretation. Of the four new years mentioned in the mishna, Tu B’Shvat is the only one that neither disappeared nor radically changed over generations.

The original agricultural purpose was deeply rooted in the ebb and flow of ancient agrarian life in the land of Israel, where the fruits of the trees were essential to the economic, political and religious systems.

With exile, that original need disappeared and the celebration of this day fell away. Yet in the Middle Ages, the kabbalistic rabbis of Tzfat gave new life to the holiday. They invented a liturgy, a Tu B’Shvat Seder, which revolved around the symbolic mystical meanings attributed to different categories of fruits that grew on trees.

But while the kabbalistic rituals preserved the place of Tu B’Shvat in Jewish life, they were not universally accepted. As Judaism entered the modern era, the new year of the trees got a new lease on life from Zionists, who were masters of reinterpretation of ritual and tradition for pragmatic and secular ritual purposes.

Tu B’Shvat came to be equated with the reclaiming of the land, the literal planting of trees to mark the return of Jews to their ancient homeland. By the 1970s, when I was busy nestling lima beans in cotton batting, the Jewish claim to land in the State of Israel was well-established physical reality, and the need to buy trees and plant forests was no longer so pressing.

Today the holiday has become a beacon of the environmental movement, focusing the attention of the Jewish community on what has become a global concern.

That Tu B’Shvat resonated through generations when the new years of kings and animals did not, speaks not so much to the importance of reinterpretation in Jewish life as to the powerful and critical place of trees in so many aspects of Jewish culture. From the first moments in Eden and the encounter with the “tree of knowledge, good and bad,” human fate has been tied to trees and practical and symbolic choices concerning them.

What started as the source of human sin also came to be associated with the salvation. Proverbs 3:18, “She is a tree of life to them who hold fast to her…,” came to be understood as a reference for the Torah itself. If the tree of knowledge caused Adam and Eve to lose their way, holding on to the tree of Torah was the path back to righteousness.

Reading the laws of warfare in Deuteronomy 20, we see that wartime morality is measured by how armies treat trees. Trees give fruit; trees are a moral compass.

The interpretations of Tu B’Shvat throughout the generations relied heavily on the centrality of trees as both symbolic and ritual elements of Jewish life.

Kabbalah scholar Jonathan Brumberg-Kraus has shown that kabbalistic rituals connected to food, such as that of the Tu B’Shvat Seder, and the kabbalistic tendency toward symbolic spiritual abstraction resonated strongly with the biblical and traditional rabbinic practice of marrying food and ritual.

But it is notable that these Seders were based on fruits of trees — in the case of Rabbi Hayyim Vital, 30 different types — and not on vegetation more broadly.

Aside from the distinction that most vegetables and grains need to be replanted every year, traditional rabbinic thought saw spiritual distinctions between vegetation and trees. According to the midrash Genesis Rabbah (13:2), in contrast to grasses, trees were put on earth to converse with people and to provide fellowship for mortals. Eating the fruit of trees, rather than tomatoes or cucumbers, had added meaning for the redemption of humankind.

Though Zionists were innovating when they placed trees at the center of a modern Jewish political vision, their reinterpretation of Tu B’Shvat resonated not only with the ancient past but also with the enduring rituals of Sukkot.

After the exile, the land of Israel was, for most Jews, almost as abstract as the concepts of the afterlife. Amidst prayers and existential longing for Israel, trees and the produce of trees provided the one tangible connection to the physical land of Israel.

The commandment to take four species — the palm, the willow, the myrtle and the citron — at Sukkot literally put pieces of the trees of Israel in the hands of every Jew. Trees had through the centuries provided a real connection for Jews to the land of their ancestors.

Some, like Barbara Lerman-Golomb of the Jewish environmental group Hazon, see the contemporary challenge for Jews who have for generations lived in urban environments largely disconnected from nature as a return to an ancient vision of the sacred in which the natural world was regarded with reverential awe. Others, like Rabbi Lawrence Troster of the interfaith environmental group GreenFaith, see the challenge as one of creating a new theological framework that will sustain environmental activism.

Whatever the spiritual and religious framework, there is broad agreement that environmentalism is not just a theoretical spiritual concern but an urgent need in the real world.

In these environmental-spirtual frameworks, trees, with their deep spiritual and worldly resonances in Jewish tradition, become a rallying point for Jewish environmentalism.

In retrospect, the folly of my childhood Tu B’Shvat ritual seems to lie not in the attention to nature, but in the disregard for trees.

In the winter months, in dark, cold climes, it can seem absurd to celebrate Arbor Day.

But in Jewish terms, the celebration of Tu B’Shvat provides us with the challenge and opportunity to consider, looking through the trees, the enduring spiritual, moral and practical role of nature in the continuing drama of Jewish life.