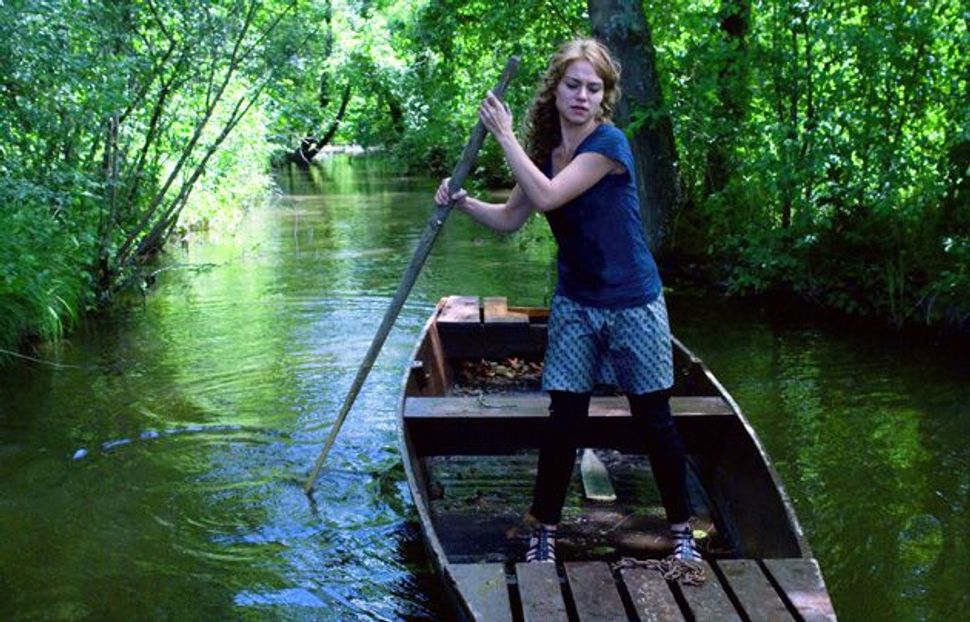 The Girl on the Boat: Jeanne (Emilie Dequenne) fruitlessly runs, roller blades and punts away from adult reality. Image by COURTESY OF STRAND RELEASES

A young mother in Paris chopped off her hair, slashed open her clothes and took herself to a police station, where she claimed that she and her baby had been victims of a verbal and physical antisemitic attack. The surge of real antisemitic attacks in France and the twist that this young woman — known only as “Marie” — was not even Jewish set off a media firestorm. That much is true. But André Téchiné’s newly released film, “The Girl on the Train,” is not interested in truth. Or rather, though it is based upon the affair, it is not concerned with the verifiable events of 2004, but rather the truth they reveal about the prevailing social situation.

Although he includes the immediate and ill-advised condemnation of this attack by President Jacques Chirac (in reality accompanied by a similarly rushed statement by Prime Minister Jean-Pierre Raffarin), Téchiné does not dwell on the hair-trigger racial tensions that enabled it. That he leaves to films like Mathieu Kassovitz’s 1995 “La Haine” (“Hate”) and to events such as the 2005, 2007 and 2009 riots.

Indeed, given that the supposed victim is a deluded hoaxer and that the hoax is based on real hate and real attacks, Téchiné’s film is a surprisingly gentle investigation of the girl, the media and the underlying social ills besetting contemporary France.

The film begins with Jeanne (Emilie Dequenne), who is not a mother in the film, roller blading happily and riding a train glumly. That her wheels of choice are individual rather than communal is significant for a film that seeks to investigate the psychology of the individual, not the pathology of the state.

Like Lola (Franka Potente) in Tom Tykwer’s “Run Lola Run,” Jeanne is a young woman in constant motion, but unlike Lola, she is barely responsible for her own actions. Dequenne plays a troubled young dreamer who is eventually brought to responsibility and imprisoned by the state. Until then she roller blades to the train or home or just for the pleasure of blading because it’s in motion that she finds freedom from consequences.

It is while roller blading she is caught by the wrestler Alex (Mathieu Demy) and romantically persuaded by his persistence. She is not bowled over, or forced by him into amorous liaisons but, as he later remarks to a third party, Jeanne “never says no.”

And, looking back at the action preceding the comment, it’s true. Jeanne’s life develops as a series of gradual acquiescences: to her mother, to Alex, to job interviewers, to shopkeepers and to policemen.

In a telling parallel, Alex persuades her into a game of undressing as they video-chat over the Internet while, after she finally admits her lie to the police, she is arrested and forced to strip as she enters her cell — presumably to remove the possibility of suicide. But as we now know, her acquiescence needs no good reason.

Interviewed and rejected for a secretarial job by the daughter-in-law, Judith (Ronit Elkabetz), of famous Jewish human rights lawyer Samuel Bleistein (Michel Blanc) on his behalf, Jeanne discovers that her father (recently killed in military action) knew Bleistein in the army.

Bleistein had written to woo her mother, Louise (Catherine Deneuve), from her father early in her marriage when Bleistein had just left the army. It’s a letter that Louise never acted on, but has kept until the present day. Louise has kept the fantasy of their romance alive in her own mind but Bleistein, though in full cognizance of that personal historical moment, has moved on.

Bleistein, and his bar mitzvah boy grandson Nathan (played, in an impressive cameo, by Jérémy Quaegebeur), are the no-nonsense scrutinizers of stories, both recognizing Jeanne’s story for a fake immediately. Positioned at either extreme of active manhood they accept their own identities for what they are and their lack of romance (with Jeanne, with Louise respectively) for what it is. Their ironic maturity (the old man, the young boy) in a world of physically adult dreamers is admirable because it is a connected, communicative maturity.

They both write important documents in the aftermath of the incident: Bleistein to the press, Nathan to Jeanne. Nathan’s bar mitzvah celebration — beautifully intercut with Jeanne’s incarceration, her own coming-of-age — shows the importance of interacting with real people.

Nathan and Bleistein dance with the guests as individuals sheltered by, but not in thrall to, the religious ritual of maturity. They are the human heroes of Téchiné’s tale.

For assuming an independent identity in a vast anonymous modern city life is heroic. When Jeanne fails to get a job, she turns more and more to Alex. Together they move in to house-sit for someone who turns out to be a drug dealer. Rather than being a rite of passage, their cohabitation is portrayed as the two of them playing house.

It is a game interrupted by a reality so violent that it throws them apart and leads Jeanne to another game: the story-telling of victimization to validate herself to Alex and Louise. Also playing childish games are Louise — who runs a crèche that she never seems to mentally escape — and Bleistein’s spoiled artist son, Franck (Nicolas Duvauchelle), and his wife, Judith, whose on-again, off-again divorce-marriage infuriates their son. The film itself is structured in two parts, “Circumstances” and “Consequences,” as if to provide evidence for the grown-up understanding that actions have consequences.

Marie’s story to the police is, quite literally, a dramatic fiction, and Deneuve leads a cast whose very celebrity almost announces the film’s intention to dramatically explore a fiction behind the fiction. Along with veterans Blanc and Elkabetz, she provides a serious dramatic backdrop in front of which the trio of Dequenne, Demy and Quaegebeur can all be interestingly childish.

Despite its sensationalist sources this is neither a film about racial hatred nor about sensation but rather it is one about coming of age and the responsibilities of individual and social maturity. As Chief Bromden says in “One Flew Over the Cuckoo’s Nest” — a quite different story about a fantasist in revolt — “It’s the truth even if it didn’t happen.”

Dan Friedman is the Arts and Culture editor of the Forward.

Watch the trailer for “The Girl on the Train” below: