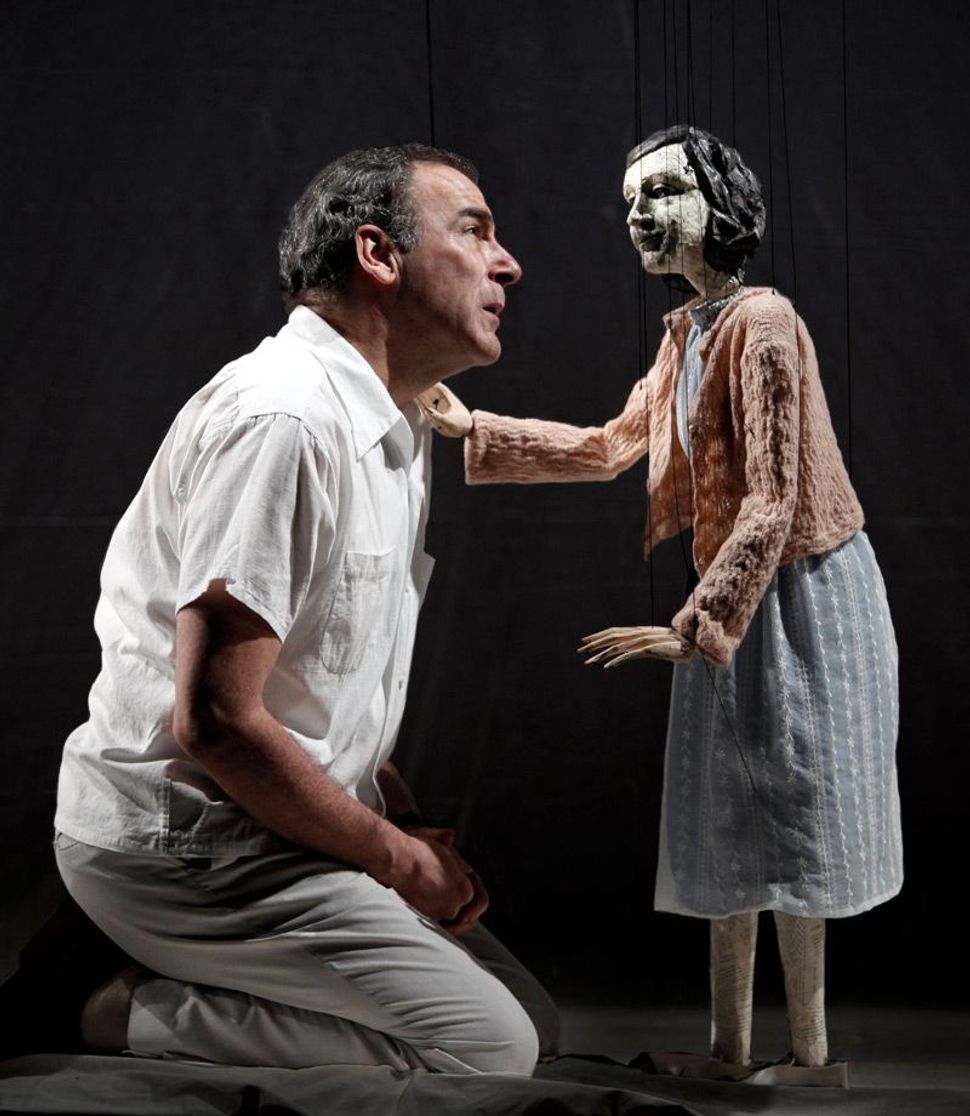 Derived from the life of Meyer Levin, who tried unsuccessfully to bring his adaptation of Anne Frank’s diary to the stage, “Compulsion” tells the story of Sid Silver, a writer who met with Otto Frank about Anne’s diary before it was even published in America, to discuss its potential for a stage production. The drive to do justice to Anne’s extraordinary story becomes what Levin himself called an obsession and the basis of Groff’s play. 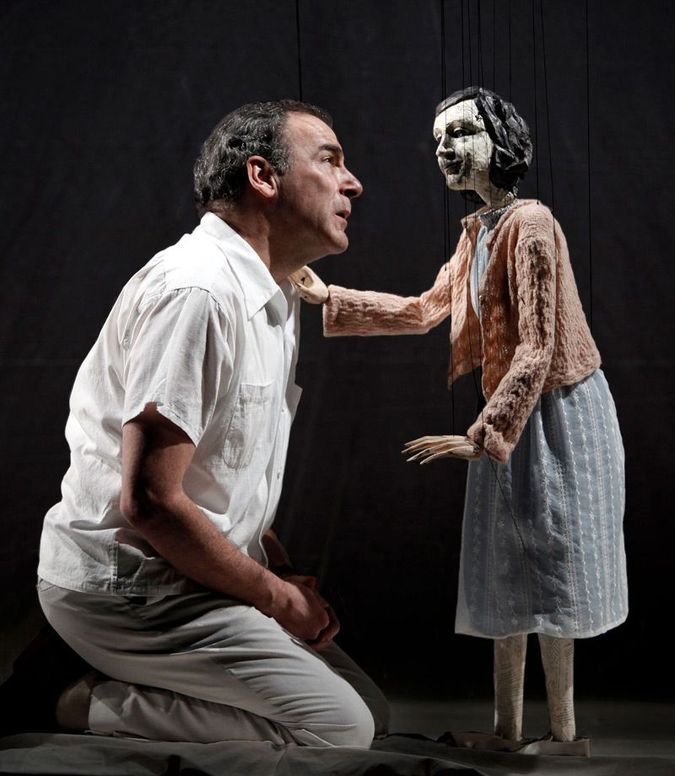 Act 1 provides an involving, behind-the-scenes account of theatrical wheeling and dealing, and the three-person cast comes off well. Tony- and Emmy-award winning actor Mandy Patinkin’s Sid is both sympathetic and too pushy, and Hannah Cabell’s Miss Mermin, a junior editor at Doubleday, seems to respond favorably to Sid. He wants to trust “the true heart of a young woman” — especially one who is Jewish, and about the age Anne would be. Then there’s the insensitive Mr. Thomas (Stephen Barker Turner) — a publisher given to lines like, “the adolescent book, by the Jewess,” and “Jewish, or whatever you want to call it” — who humors Sid only because Otto Frank wishes it. We seem to have the makings of an intrigue in which Jewish identity must prove its merits, its tenacity, its values against indifference and commercialism, and the need to “universalize” Anne’s story. We accept Sid as our man with both a conscience and a consciousness of what is at stake, and wait to see which way Miss Mermin will go. Can Sid woo her to his vision of Anne and the play? Will she value what he does?

But when Sid’s script gets passed over by the play’s producer, and Sid begins inveighing against conspiracies involving Lillian Hellman and other preferred writers, we suspect, as Mermin implies, that Sid might not be sufficiently Big League to play the kind of ball necessary. Are we seeing a man of conscience who, as a writer and as a Jew, feels compelled to stage a more authentic version of Anne’s diary, or does he simply have a compulsion to assert himself because of anxiety about his own stature? “Compulsion” keeps our interest because by intermission, we’re not sure: The reading of Sid could go either way. The larger question becomes whether we see Sid’s predicament as meaningful for an assertion of Jewish identity, as he does, or simply as his own problem.

And that question becomes the most vivid element of the play. Sid’s insistence on historical accuracy and religious identity makes his a just cause. He scores points when he insists that use of the term “race” in the Pulitzer-winning play by Albert Hackett and Frances Goodrich falsifies Anne’s view, as she never used that term. But he loses points as his need to assert himself in the face of all opposition becomes a persecution mania of staggering proportions: Sid has the audacity to call Otto “my Hitler and my Stalin” for not backing him. When, late in “Compulsion,” Sid, living in Israel, where he stages an illegal production of his play, is reduced to blubbering, “If I forget thee O Jerusalem…” (in a manner reminiscent of Fredric March as the overzealous Matthew Brady in “Inherit the Wind”), obsession becomes fanaticism.

As Sid, Patinkin sometimes lets bluster get the better of nuance. He stepped on his own lines a few times in presenting Sid’s impatience. But in time, Patinkin will make this part fully his own. He has the raw force of personality that Sid needs, and he also has the ability to express Sid’s moments of spiritual serenity, born of a conviction that Jewish suffering has a moral basis.

As both Miss Mermin and Mrs. Silver, Hannah Cabell renders the women likable but not too likable. There’s a brittleness to Miss Mermin that keeps us on guard, and Mrs. Silver, first introduced while drunk on several gin and tonics, feels at times simply a sensual foil to Sid’s doggedness, though she eventually gains in stature as Sid’s lifeline of sanity. But though she truly suffers from what her husband’s obsession does to them, there is always something a bit too distancing in her presentation. We never really warm to her, whereas warming up to Miss Mermin seems to have more erotic potential, particularly as she could become a surrogate for Sid’s passionate attachment to his ideal of Anne.

The play’s use of marionettes — an inspiration of Groff’s when she learned that Levin had once worked in puppet theater — is mostly successful and suggestive. Using a puppet, designed by Matt Acheson and animated by The Puppet Kitchen, allows the play to portray Anne as an amorphous figure, both the young girl she is eternally in her diary and a more mature figure by the play’s end, set in the late 1970s; there were also telling puppet theater stagings of glimpses of the two plays: The close of the Hackett/Goodrich version is shown with American and with British accents, and then in German and Japanese; Sid’s version is presented in Hebrew.

The marionette also helps create what may be the most memorable scene: Director Oskar Eustis, who is the artistic director of The Public Theater and has worked with Groff previously, presents a dreamlike encounter in which Anne appears in bed beside Mrs. Silver to speak about her husband. Here Patinkin provides Anne’s voice, and we’re shocked to hear Sid’s bitterness in Anne. But there’s also a driving sense of the pathos of Otto, a man whom Sid had championed then cruelly insulted, as Sid’s face becomes illuminated in the background, voicing Anne’s words of sympathy for her poor father, bereft of “his Anne.” In such moments, “Compulsion” moves toward a more complex staging of the personalities caught up in its drama.

But what doesn’t quite come across is Sid’s scene with Anne. As their first interaction, their exchange doesn’t accomplish enough. The flirting feels off the mark, and the lines repeated from the close of the Hackett/Goodrich play ring slightly hollow. This made for a weak final curtain, perhaps because there is no way to resolve successfully — not even in theater — a compulsion to relive the same lessons. Sid must go on resenting his play’s neglect, and what can Anne say to a man who burned 30 years in dedication to her teenage self?

“Compulsion,” commissioned by The Public Theater and The Berkeley Repertory Theatre, is a thoughtful play that could be better thought out, a play about theatrical authenticity that feels a little false in the close, a play about Jewish identity that successfully questions the compulsion to suffer for it.