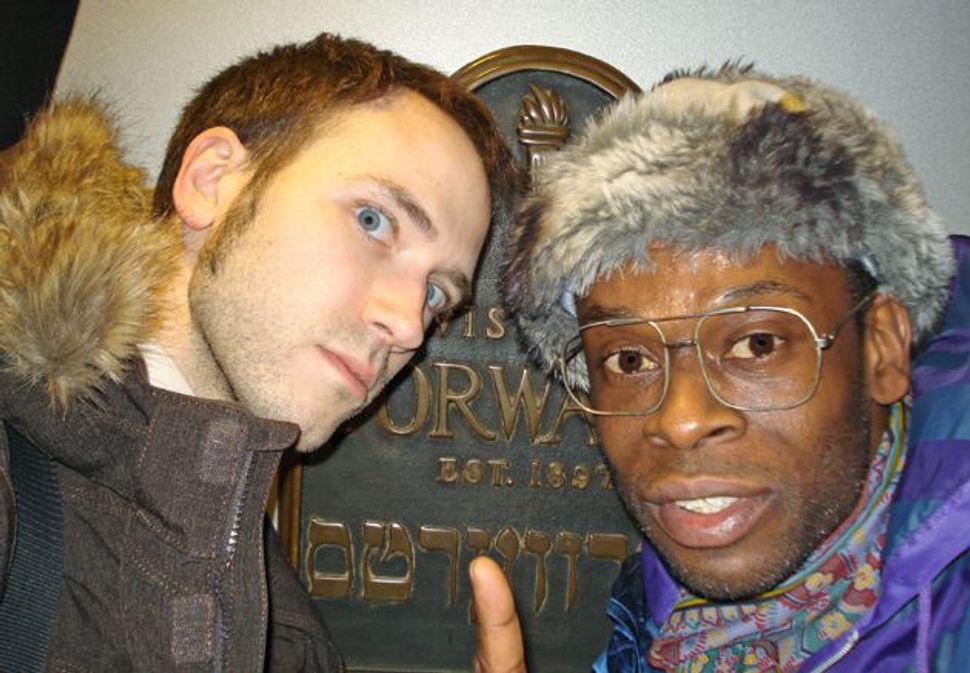 Songs Without Words: Forward artist-in-residence Jeremiah Lockwood (left) collaborated with Broadway star Sahr Ngaujah (right) to reinterpret an 18th century Hasidic nigun, or a song without words. This is the first installment in a ten-part nigunim project.

Nigunim, or songs without words, were a crucial outward expression of the religious experience of the 18th-century Hasidic revivalist movement. The early Hasidim created a new and distinctly Jewish ritual act by singing these meditative and incantatory melodies in chorus with a community of fellow spiritual seekers.

These songs could raise their spirits, transform the mundane into the holy and create moments of devekus, literally “cleaving,” where the soul is elevated toward the divine. In the traditional Jewish hierarchy of spiritual achievement, the study of Torah is the supreme value. Rabbi Yisroel Ben Eliezer, also known as the Baal Shem Tov, the founder of Hasidism, understood that talmudic scholarship was accessible to many but soul-colored melody was accessible to all.

According to the Baal Shem Tov, singing nigunim could elevate the consciousness of a devotee to the same level as that of a great scholar. In the worldview of the Hasidim, the ecstatic experience of singing and dancing was considered to be of equal value to the rigors of esoteric intellectual achievement. Through this revolutionary reordering of values, the Baal Shem Tov paved the way for the Hasidic revival movement that swept across Eastern Europe and changed the spiritual lives of millions of Jews. Nigunim, composed by rabbis and their followers, were both the quintessential aesthetic expression of Hasidism and one of the most powerful meditative tools of the new religious movement.

In the Nigun Project, I am seeking to explore this seminal Jewish music form and remake it for the 21st century. The melodies of the Hasidim are a numinous and multivalenced text ripe for rediscovery and recontextualization, but as with so many aspects of Jewish traditional culture, the vast body of nigunim is lost to most people outside the religious community. The Nigun Project will reinterpret and bring these melodies to music lovers on the level playing field of art, where religious and nonreligious, Jew and non-Jew alike, can partake of that which is good.

Each month, a different partner will be working with me to create new music inspired by nigunim, and for many of them it will be their first exposure to the genre. Their talents, from a wide variety of different musical fields and genres, will take these classic melodies into a new light.

In the first installment, online at www.forward.com, I worked with Sahr Ngaujah, the singer and actor who created and played the role of Fela Kuti in “Fela!” which recently opened to great fanfare on Broadway. For our piece, I selected an early nigun, attributed to the great Rabbi Nachman of Breslov, great-grandson of the Baal Shem Tov. For this first piece of the project, I decided that I wanted to use the traditional texture of a cappella men’s voices to present the nigun. Ngaujah immediately sensed the mythological layers present in the melody. We spent much of our sessions together discussing the history and philosophy of the Hasidic movement. Both his sensitive reading of the melody and his gorgeous improvisations were a direct response to his receptive entrance into the transformative realm of the nigun.

This piece is the first of the Nigun Project’s 10 collaborations over the year. I am deeply excited to watch as a new and vivid body of work arises out of the dusky realm of nigunim.

Jeremiah Lockwood, artist-in-residence at the Forward, is commencing the Nigun Project. This collection of new works based on Hasidic nigunim will appear regularly on the Forward Web site throughout 2010. This project continues the Forward’s historic tradition of commissioning new Jewish art in the spirit of its collaborations with great 20th-century Yiddish authors like Isaac Bashevis Singer and Chaim Grade.