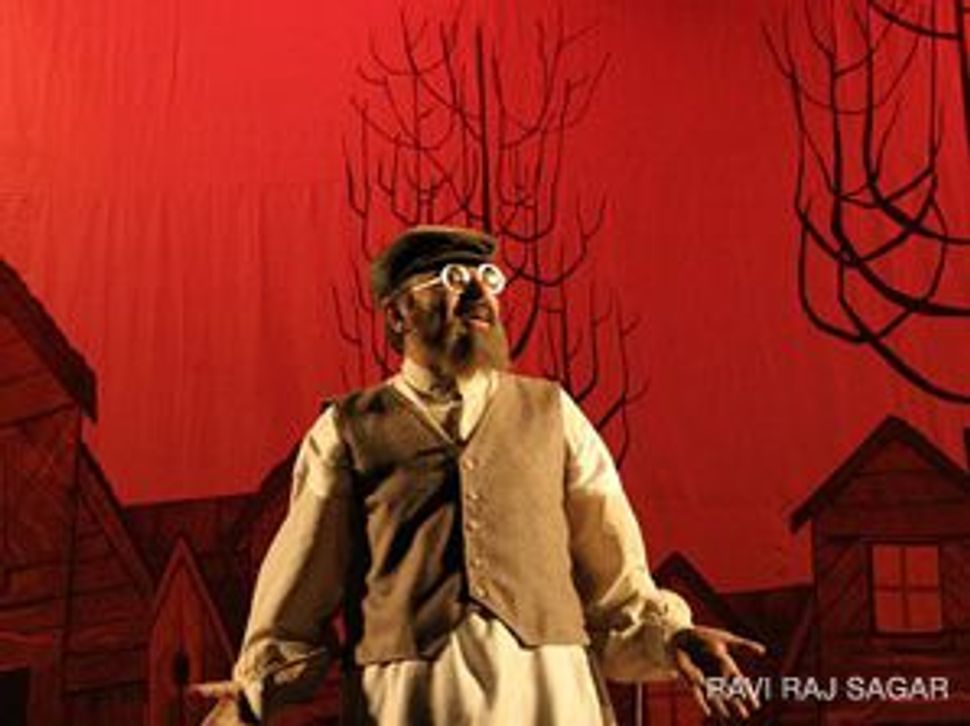 Rakesh the Milkman: Indian actor Rakesh Gupta, a 48-year-old civil servant, plays the iconic role of Tevye in a Hindi production of 'Fiddler on the Roof.'

Despite the fact that almost all her knowledge of Jews and Jewish culture comes from a couple of books and the film “Schindler’s List,” Renu Chopra, a slight Hindu woman raised in the north Indian state of Punjab, plays a surprisingly convincing Yente, the nosy shtetl matchmaker in “Fiddler on the Roof.” 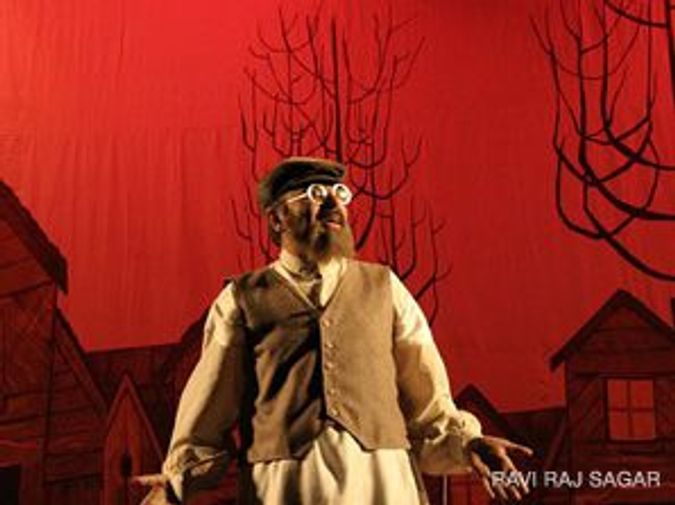 Rakesh the Milkman: Indian actor Rakesh Gupta, a 48-year-old civil servant, plays the iconic role of Tevye in a Hindi production of 'Fiddler on the Roof.' 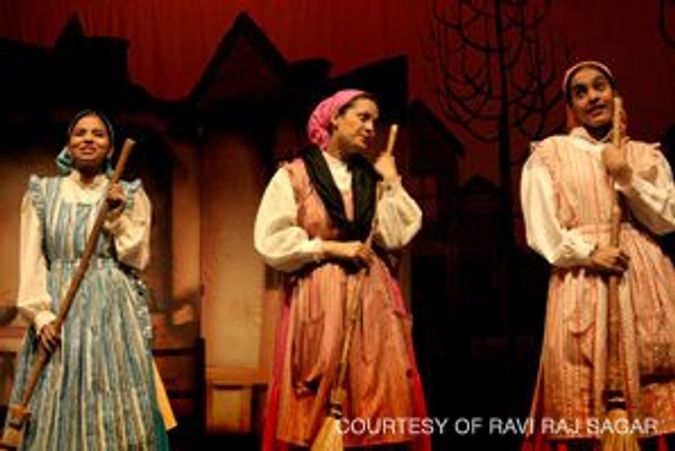 Jewish Delhi: 'The only difference is the setting and the names of the characters,' said director Ravi Raj Sagar of the Indian production. 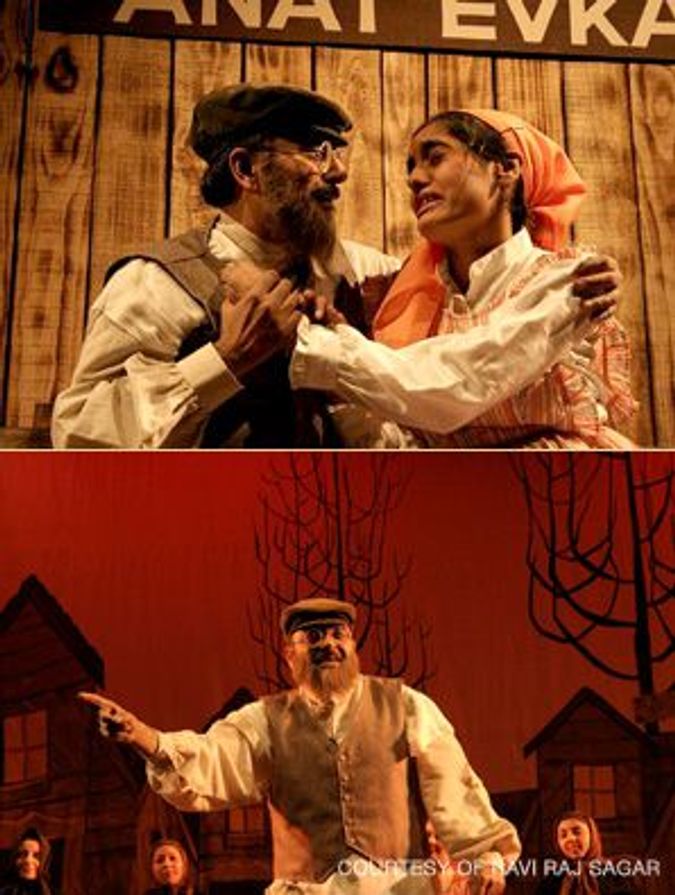 “I’ve never met a Jew, never,” Chopra said while wrapping a black shawl around a sparkling gold-and-red kurta during a recent rehearsal. “People [in India] don’t know about Jews. They have no idea about Jews.”

That’s not surprising, considering that there are only about 5,000 Jews in this country of 1.1 billion people, and only about 40 Jews in the capital city of New Delhi. But that didn’t stop an amateur theater company here from staging a Hindi “Fiddler” that’s played five times since this past December, with four more shows scheduled for April. The play, a recent performance of which drew an audience of about 1,000, has enjoyed considerable success in a city where Bollywood blockbusters are a far bigger draw than the slim theatrical pickings.

India is hardly the first country to stage a translation of the iconic musical. There have been thousands of “Fiddler” productions in dozens of languages, according to Alisa Solomon, a Columbia University Graduate School of Journalism professor who is writing a book on the play. Yet, the show’s appeal in modern India seems particularly strong, largely because of the compelling cultural parallels between 19th-century shtetl values and current attitudes in the world’s largest democracy.

Through Tevye the milkman’s struggle with the increasingly progressive marital desires of his three oldest daughters, “Fiddler” confronts the painful realities of deviating from tradition, and explores the difficult choices that parents face when their children’s actions and desires clash with religious and family custom.

“The character is so universal, he could be an Indian for all that it matters,” said Rakesh Gupta, the 48-year-old civil servant who plays Tevye in the production. The issues facing the play’s protagonist are of enormous importance in India, a nation where most marriages are still arranged, where families commonly save for their entire lives to afford dowries, and where many communities still place taboos on interfaith and intercaste marriages.

Those similarities helped guide the performance of Swati Seth, the 29-year-old Hindu who plays Chava, Tevye’s third daughter. Chava elopes after Tevye forbids her from marrying outside her religion.

“I come from a contemporary family,” Seth said. “But even if I were to choose to marry a man out of my religion… maybe a Christian or a Muslim, [my parents] would be as mad as Tevye was.”

While such interfaith marriages are still discouraged, if not forbidden, marital tradition is more and more in flux here, particularly among well-educated and well-to-do Indians in their 20s and 30s. There are plenty of instances of grown children telling — not asking — their parents whom they’ll be marrying, as does Tevye’s second daughter, Hodel.

In “Fiddler,” Chopra said, “everybody can see a picture of their own kids. They can see themselves in place of Tevye.”

The similarities don’t end with marriage. The issue of forced emigration — the play closes with the Russians evicting the Jews of Anatevka — also has resonance for many Indians. The partitioning of the Indian subcontinent in 1947, which resulted in the creation of independent Pakistan and India, involved one of the greatest emigrations, both voluntary and involuntary, in modern history — as many as 10 million people, according to some estimates.

Among those emigrants were the grandparents of Nandini Hoon, the play’s production manager, who is doing double duty as Motel the Tailor’s mother. In 1947, Hoon’s grandparents lived in Lahore, just west of the newly drawn border.

“All of a sudden, [Anatevka’s Jews] were told to move,” she said. “It was quite similar for my forefathers when they came from Pakistan to India during partition. So that’s why I could relate to this play, because it’s the same feeling.”

Yet even with such parallels, the cast and crew had a lot of work to do before they could undertake putting on an authentic “Fiddler.”

Because most of the cast members had never met a Jew before, they were encouraged to read about Jewish history and culture. Many scoured the Internet, and director Ravi Raj Sagar set up an online discussion group where the cast and crew could share what they’d learned. Gupta, for instance, did Google searches on Jewish history, the importance of the Sabbath, kosher meat and the meaning of “L’chaim.”

“These were things we wanted to know,” the actor said. “Without that, you can’t do justice to the play.”

Still, there was no attempt by the cast and crew to reach out to the members of the Judah Hyam Synagogue — New Delhi’s only Jewish house of worship. Not that there were too many Jews to reach out to. The 52-year-old synagogue drew only about two dozen people (most of them foreign Jews on holiday) to services on a recent Friday. None of them knew about the “Fiddler on the Roof” production that would be playing just a few miles away the following night.

“They never came to us,” said Ezekiel Isaac Malekar, a lawyer who acts as the synagogue’s volunteer rabbi. “I don’t know whether they are aware that there is a Jewish community in Delhi. That may be one of the reasons. Sometimes they confuse between the Jews and the Christians.”

There was no such confusion onstage the following night, when about 30 Indian actors wore costumes true to typical American productions of the play. For men, that meant white shirts and faded caps, and pants tucked into the ankles of black boots. The knotted fringes of their tzitzit dangled beneath dark vests. Women wore aprons over long dresses and had their heads covered.

To help clue in the audience, a short glossary of Jewish terms used in the play was printed on the back of each ticket stub: fiddle, Sabbath, synagogue, mazel tov and rabbi, among others.

Still, not everyone in the audience was up to speed.

When one thinks of Jews, “you think of very rich businessmen, very intelligent people who’ve done very well for themselves,” said Anugya Singh, a 24-year-old student in the audience.

The production — put on by Dramatech, a 23-year-old amateur theater company run by alumni of a prestigious technical institute — is a lean version of the original musical. Sagar spent months carefully translating several songs to Hindi, including “Tradition” (“Parampara”), “Matchmaker” (“War De Mujhe”), “If I Were a Rich Man” (“Jo Main Hota Malamaal”) and “To Life” (“Zindagi”). But others were cut, including “Miracle of Miracles,” “Tevye’s Dream” and “Now I Have Everything.”

While translating the English dialogue to Hindi was fairly straightforward, the songs were much more difficult, Sagar said, because the number of syllables in each lyric is very much wrapped up with the underlying music. Because English is a more crisp and succinct language than Hindi, Sagar often had to use two lines of Hindi to capture just one line of English.

But regardless of the language in which it’s performed, the play remains, for many, a timeless story with cross-cultural appeal.

“Certain threads of what the original Jewish play has — family values, traditional values, community values, religious values — we also follow the same thing in the Indian way of life,” Sagar said. “The only difference is the setting and the names of the characters.”

Ben Frumin is a freelance journalist based in New Delhi, India.

WEB EXTRA: Click here for video from New Delhi’s Hindi-language production of “Fiddler on the Roof,” as well as footage of other foreign-language performances of the classic musical.