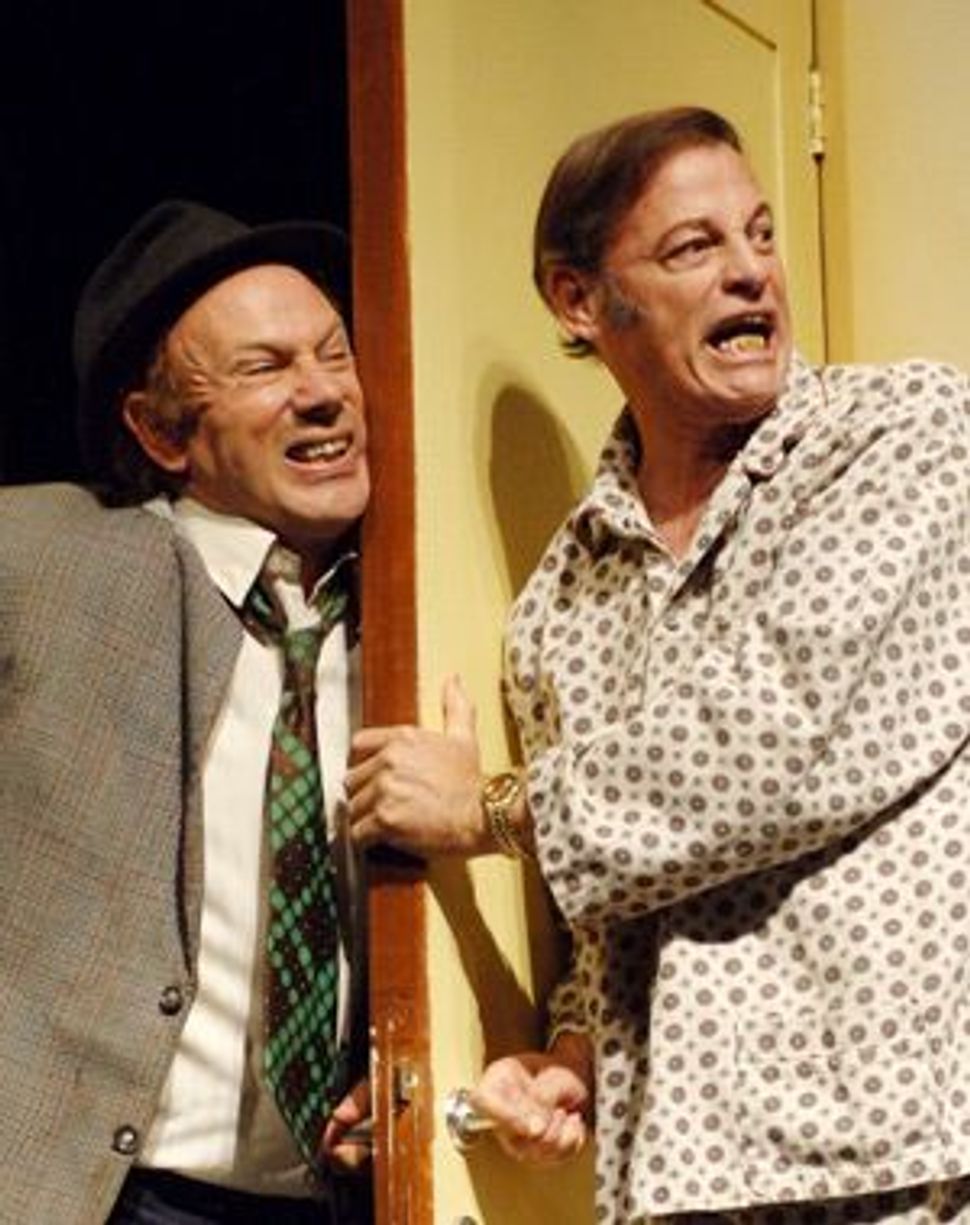 Breaking Down The Door: Gadi Yagil (right) and Rami Baruch struggle in ?Thrill My Heart.? Image by GADI DAGON, COURTESY OF THE CAMERI THEATRE

Love and its crushing disappointments are at the center of Hanoch Levin’s newly discovered play, “Thrill My Heart,” “Hartiti et Leebee” in Hebrew, running now at the Cameri Theatre in Tel Aviv. The play, written by Israel’s most renowned playwright, was discovered shortly after Levin’s death in 1999 and caused a stir of excitement and anticipation. The new production at the Cameri is directed by Udi Ben Moshe and features some of Israel’s most gifted actors and Levin regulars: Rami Baruch, Gadi Yagil and Gita Munte. 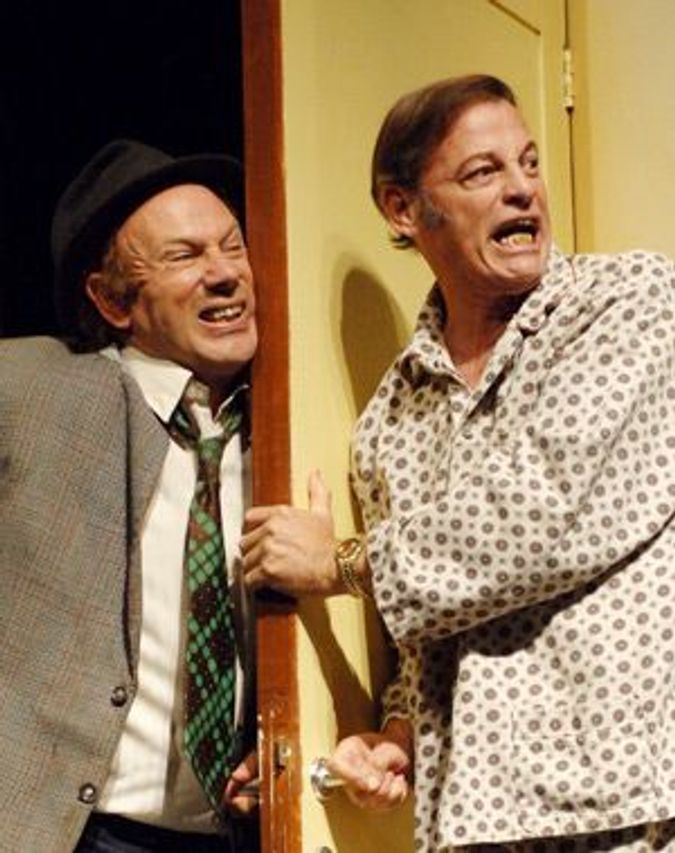 Breaking Down The Door: Gadi Yagil (right) and Rami Baruch struggle in ?Thrill My Heart.? Image by GADI DAGON, COURTESY OF THE CAMERI THEATRE

Levin wrote more than 55 plays, 33 of which were produced during his lifetime. Born in 1943 in Tel Aviv, he was raised by religious Polish parents in a working-class neighborhood and later studied philosophy and literature at Tel Aviv University. His work is woven from a rich tapestry of influences: the Jewish immigrant experience, the shtetl mentality, biblical texts and Israeli politics and culture. These allowed him to create his own dramatic language that was profoundly unique and Israeli, as well as highly theatrical and universal.

From the shocking to the extremely funny, Levin repeatedly pushed the envelope linguistically, visually and dramatically. He ferociously sought hidden and unpleasant cultural, political and psychological truths: He concerned himself with the clash between the Jewish European past and the Middle Eastern present, along with the continuous pain of dislocation juxtaposed with the primal need to conquer and belong.

Levin’s early satires — “You, Me and the Next War” (1968) and “Ketchup” (1969) — were sharp political critiques that exposed the challenges caused by the Israeli occupation of the Palestinian territories, and were an early warning against its social pitfalls. His third satire, “Queen of the Bathtub,” staged at the Cameri in 1970, was a pointed attack not only on the government and its complacency after the Six Day War, but also on Israelis themselves and on the cultural landscape that allowed such events to occur. The play drew an outcry from the Israeli religious and military sectors, and so it had to be canceled after only 19 performances.

Levin’s first critically acclaimed play, “Hefetz,” about a family’s mistreatment of a live-in relative (“hefetz” means “object” or “thing” in Hebrew), was produced at the Haifa Theatre in 1972. After that, Levin wrote and directed at least one play each year until his death, 27 years later. The Cameri Theatre, despite canceling his first production, became his artistic home. He worked there for most of his career, and after his death the Cameri established the Hanoch Levin Institute of Israeli Drama.

By the time of his death from cancer, Levin had reached master dramatist status in Israel. His collected plays have been published in a multivolume collection (by Siman Kriah, Hakibbutz Hameuchad and Sifrei Tel Aviv), and his productions continue to tour the globe. Therefore, the discovery of a new Levin play and then a new Cameri production of it are big news in Israel indeed.

Professor Nurit Ya’ari, a Levin expert who heads the drama department of Tel Aviv University, divides Levin’s plays into three categories: the aforementioned political satires; the neighborhood plays, such as: “Hefetz,” “Krum” and “Yaakobi and Leidental,” all set in an ordinary neighborhood like the one in which he grew up, and the myth or spectacle plays, based on myths, biblical stories or other texts: “Job’s Passion” “The Child Dreams” and “Requiem,” the last on which he continued to work from his hospital bed.

The new production is a neighborhood play and centers on matters of the heart more than on political issues: “‘Thrill My Heart’ is a romantic comedy with no romance,” Ya’ari said. As the play opens, Judge Lamka (the brilliantly heartbreaking Baruch) tells his best friend, Pshoniak (Yagil), about his beloved, the singer Lalalala (Tamar Keenan). The judge expounds on Lalalala’s attributes and their love affair, only to find out, minutes later, that she has been seeing a Frenchman, among others. Unlike a classic comedy but very much like a Chekhov play, satisfaction is elusive and dreams never come true. Judge Lamka continues to wait under Lalalala’s window. Lalalala never reaches stardom (she has a wart on her foot that somehow prevents her from reaching her low registers). Pshoniak can’t leave his wife, Kaha-Kaha (“So-So,” played with precision by Munte), who continues to sleep all day as her life passes her by.

All the characters attempt to break out of their daily routines in order to try and change their fate. Judge Lamka decides to visit his beloved Lalalala in the middle of the week, despite their Saturday, 8 p.m., arrangement. It is then that he meets Lalalala’s other lovers: the Italian, the Spaniard, the Turk, the Yugoslav and the Albanian. The more the judge tries to win Lalalala’s heart, the more unreachable she is. The more Lalalala pursues stardom at home and abroad, the more she fails. Pshoniak, too, in one courageous moment, manages to leave Kaha-Kaha, only to be challenged to a duel by the suspicious Judge Lamka and then return to the same old routine of tea making and complaints of his so-so wife.

Ben Moshe’s minimalist production allows Levin’s play and its actors to shine. The simple set by Lili Ben Nachshon features only a few distant stars and a mobile doorway, a threshold that the characters never seem to cross. The characters and their dreams are eventually stripped of illusion, as well: Judge Lamka was only “a beauty pageant judge once.” Lalalala’s real name is Musia Podgornik. Freedom, too, is much more challenging than Pshoniak dreamed that life without Kaha-Kaha would be.

The only thing left for the characters is the dramatic action of waiting itself. As with Beckett’s “Waiting for Godot,” but with no benevolent force, silent or otherwise, to reckon with, there’s only the tedious quotidian set against the stubbornness of the human heart in its anticipation of the next thrill.

Zohar Tirosh-Polk is a playwright, translator and freelance writer. She lives in Brooklyn.