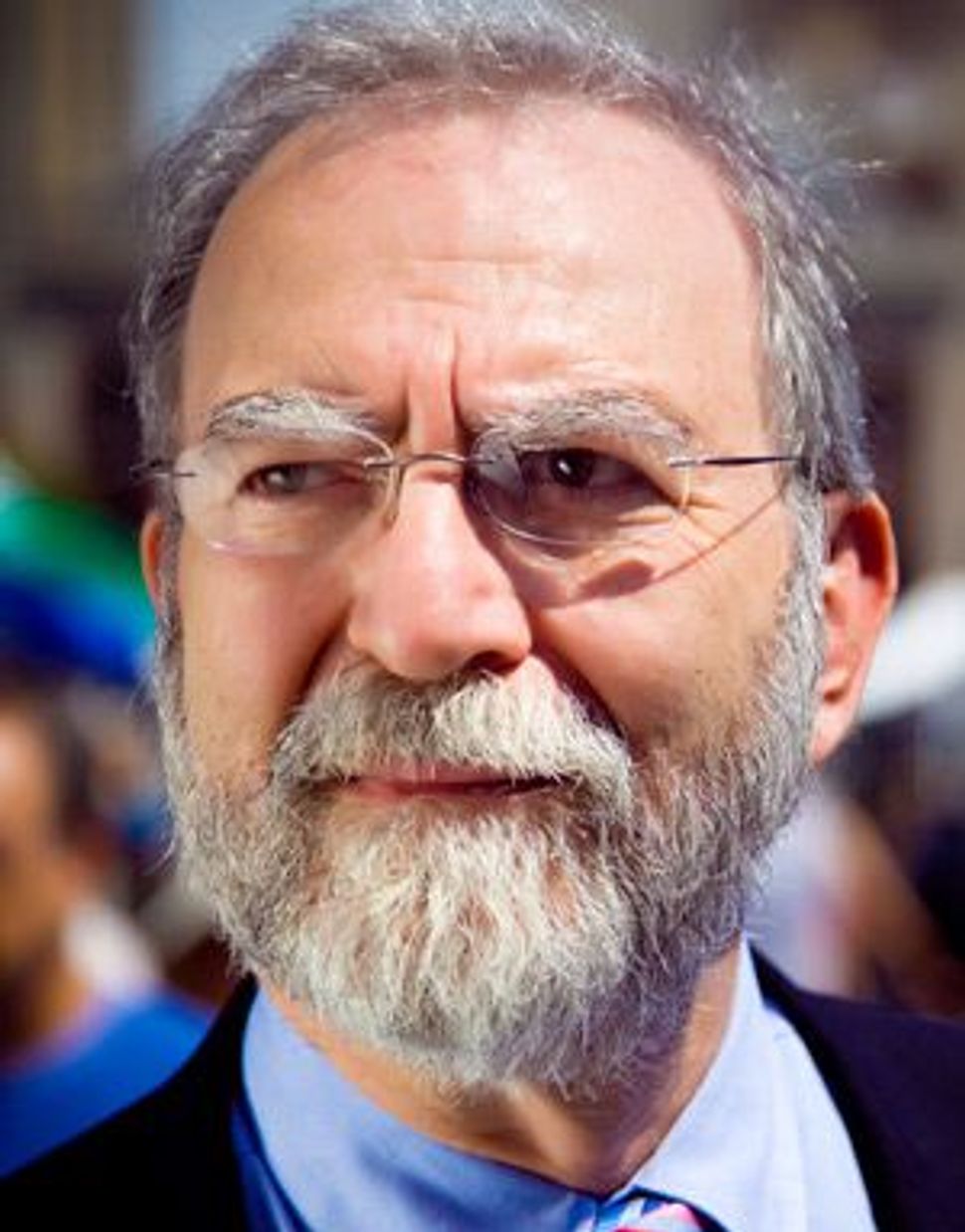 Deep Thought: Lopate has a profound ability to listen. Image by COURTESY OF WNYC

It helps if Catherine Deneuve likes you. When I spoke to him in his studio, Leonard Lopate — celebrating 25 years at WNYC this year — noted how helpful it was for his journey from art student to radio host, to win the approval of French film stars: Deneuve, Daniel Auteuil, Jeanne Moreau, and others. 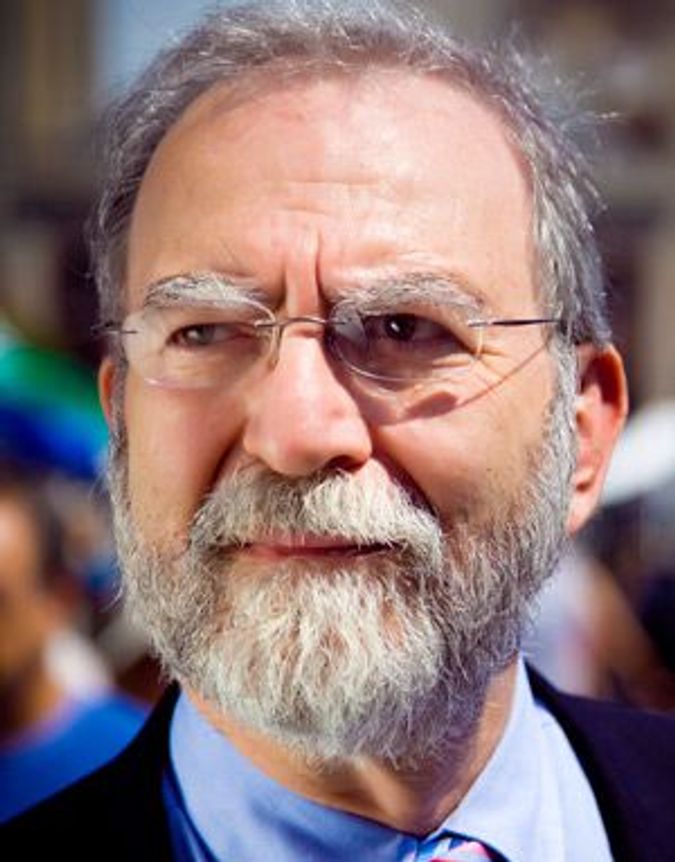 Deep Thought: Lopate has a profound ability to listen. Image by COURTESY OF WNYC

Because before Lopate became a radio conversationalist nonpareil — interviewing presidents, film stars, authors, artists, scientists and chefs — he was a serious young artist who trained with Mark Rothko at Hunter College and with Ad Reinhardt at Brooklyn College. He was so committed to being the best that he gave up abstract painting when, walking down the street, he saw a work resembling his own by a young, but published, artist he had not previously heard of. As Martha Plimpton pointed out at a recent roast at his expense (with a dig at Lopate’s unshakable self-assurance) it’s a precedent that suggests he has not heard a better radio interviewer than himself in the past quarter-century.

And many would agree with that assessment. A multiple award winner for programs on food, politics and musicians, Lopate asks calm, well-informed questions and has a profound ability to listen to the answers. This broadcast salon provides the aural backdrop for cultural work of thoughtful people in New York. My own doctoral dissertation, Art Spiegelman’s “Maus” and every Chuck Close work for the past 20 years have been produced while listening to “The Leonard Lopate Show.” Somewhere between soundtrack and superego, the lulling tones of Lopate and his guests (Plimpton suggested that if dead men spoke, they would speak with the energy of Lopate) dissect all manner of creative processes.

Because this is the secret of the show. From his experience as a young singer with Marvin Silbermintz’s choir, as a painter and as a fascinated gastronome, Lopate (along with the often credited but rarely heard producer Melissa Eagan) realized that what these excellent products had in common was a scrupulosity of process. No matter what the outcome — whether poetry, film, legislation, mathematical formulae or food — the listeners would be fascinated by the guests’ method.

Although when he first started off at WNYC, Lopate claims to have been “barbed to listeners and a little shticky,” after a producer told him to be nice to the listeners, the pursuit of substance moved front and center of the show. Lopate told me: “If you don’t entertain, you’ll lose the audience. But if there’s no substance, you’re just wasting airtime.”

It was by accident that he moved into radio. While working in advertising, he hosted a one-off gospel show on WKCR and then, after a labor dispute at WBAI, began hosting “Round Midnight” on that station. He ran that weekly late-night show for eight years, answering his own phones in the wee hours of the morning to a varied crowd of callers. Among others, he would pick up the receiver to find Spalding Gray, a shrink who called to admit he’d been playing mind games with his wife, repeat calls from a prostitute getting off work and Abbie Hoffman while he was on the run.

Lopate moved to WNYC to co-host “Senior Edition” after the death of Marty Wayne, the previous co-host. Gradually he changed the program, moving it away from narrow subjects of interest to seniors and trying for a higher standard of interviewee. That’s where the French came in. Arriving in New York in the 1980s, they had little awareness of where they were “supposed” to go for interviews, and soon they found that there was a knowledgeable interviewer who made them sound smart and interesting while shedding light on their method.

Soon others began to hear of this interviewer, and, with people like Jimmy Carter, Amos Oz, John Updike, Francis Ford Coppola, Norman Mailer, Meryl Streep, Barack Obama and Henry Kissinger, his interviewees constitute a who’s who of global culture. With its changing focus and heightened credibility, the show changed name to “New York & Company” before eventually becoming “The Leonard Lopate Show.”

When Kissinger was in the studio, Lopate asked him about his involvement with Indonesia’s brutal intervention into East Timor.

“I said that I was having Kissinger in, and a number of people sent me documents,” Lopate said. “This was before I could employ proper serious researchers, but I had excellent documentary evidence in front of me. On the BBC, interviewers had accused him of being a war criminal, but I wanted to do a friendly interview; if you are insulting, then guests are entitled to walk out. But I also wanted to be able to say, ‘But what about being in Djakarta the day before the Indonesian army marched into East Timor?’”

“Preparation is vital. You need to have the document in front of you because politicians, especially, have a well-practiced way of presenting the facts, and it’s very compelling and impressive. Even if it’s a good interview, Kissinger isn’t going to say, ‘Okay, you’re right, I’m a war criminal.’ And if he does decide to do that, he wouldn’t on my show, he’d do it on ‘Larry King’ or something!”

With the advent of the Internet, New York’s conversation is now accessible to people around the world, in places as far afield as Finland, Africa and South America. Lopate remarked wryly, “I had a writer from Japan say that she started listening to improve her English and found after a while that it was actually interesting!”

Although it’s the guests rather than the language instruction that initially attracts most people, it’s Lopate’s studied questions that keep the attention. There are few places on the radio dial or on the Internet that gently delight while having the depth of investigation to make all involved feel smarter. “The Leonard Lopate Show” is one of them: another reason to be grateful to French cinema!