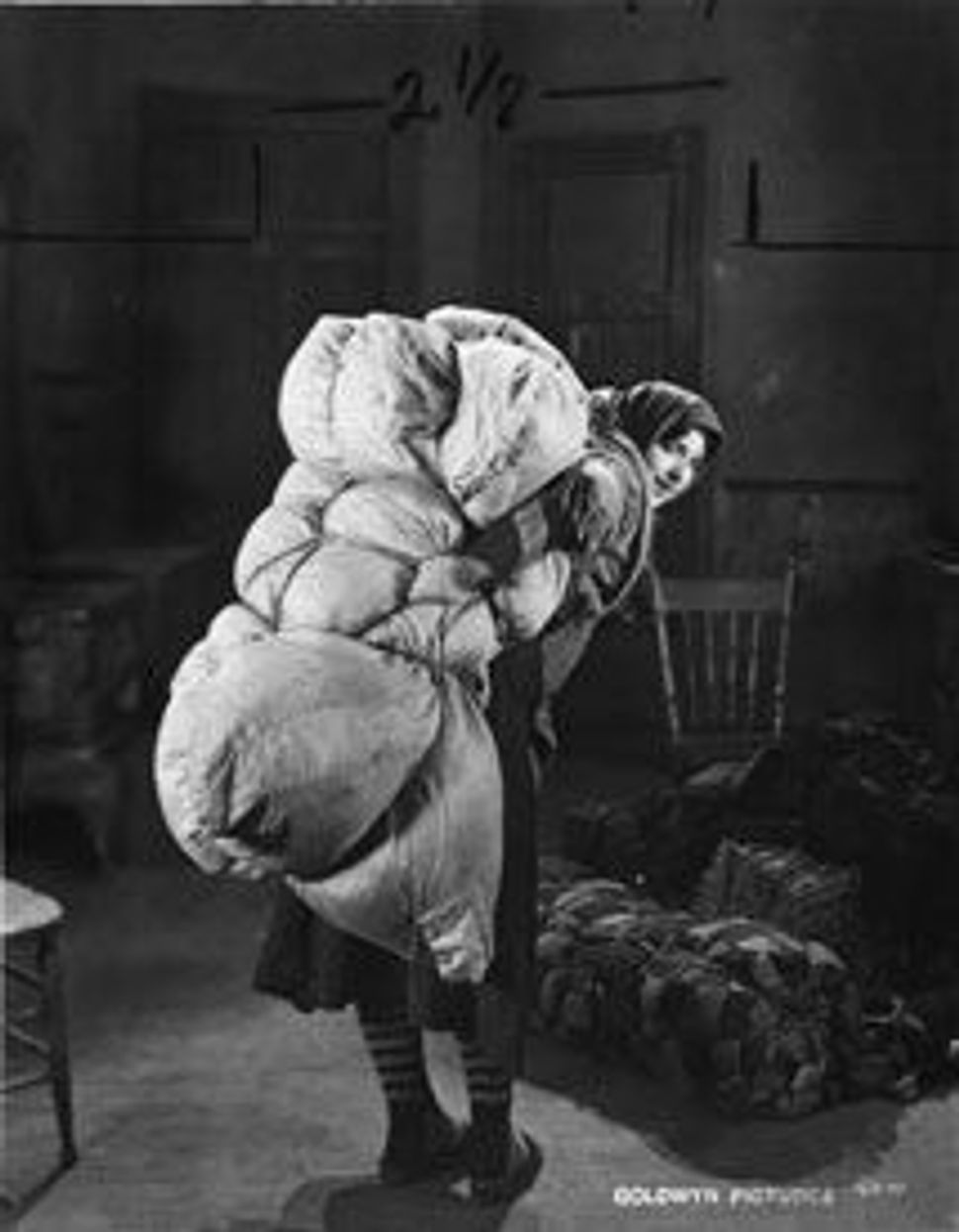 Backpack: Yezierska?s ?Hungry Hearts? was made into a silent movie, a screenshot for which is above. Image by Wisconsin Historical Society

She was “loud, coarse and demanding, constantly intruding her presence everywhere and taking up all the air in the room,” according to literary critic Vivian Gornick. 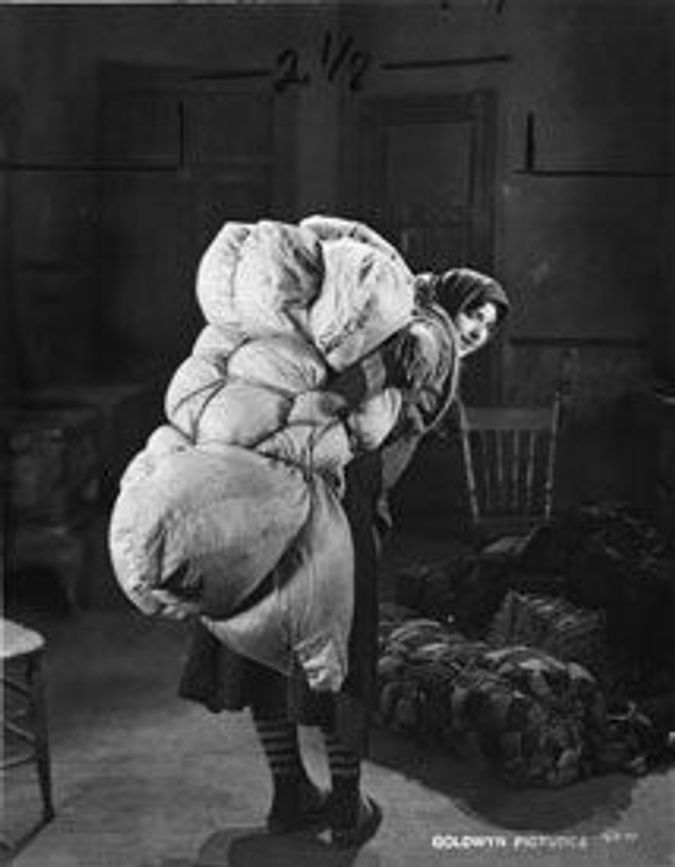 Backpack: Yezierska?s ?Hungry Hearts? was made into a silent movie, a screenshot for which is above. Image by Wisconsin Historical Society

She married twice, divorced quickly and left her daughter with her second husband, the child’s father, in order to write.

She was a short-lived star of a writer, whose most popular novels and short stories were published between 1920 and 1932.

She spent the last years of her life living in a single room occupancy on Manhattan’s Upper West Side, in a room with only two burners on which to cook.

And yet, Anzia Yezierska is read universally across women’s history, labor history, immigrant history and literature; American Jewish history and literature, and New York City history and literature classes all over the country, and is now the subject of a documentary, “Sweatshop Cinderella,” which had a May 5 showing at CUNY’s Graduate Center and will be presented on June 8 at the Tenement Museum and, on July 11, at the Yiddish Book Center, in Amherst, Mass.

It is historian Suzanne Wasserman’s third documentary, and in it she continues to use the personal style she used in her first, “Thunder in Guyana,” about her cousin Janet Jagan, the American Jewish woman who became president of Guyana. Wasserman does not have a familial connection to Yezierska, but responded viscerally to her when she first read Yezierska’s most famous novel, “Bread Givers,” in graduate school. Yezierska’s fiction still maintains this kind of power, more than 85 years after she wrote her seven books and innumerable short stories.

“Bread Givers” tells the story of Sara Smolinsky, one of four daughters of an impoverished Jewish immigrant family on Manhattan’s Lower East Side. She chafes at her father’s Orthodoxy and breaks away by leaving the house, getting a job and going off to college to become a teacher. “It was a very cool, anti-nostalgic take on the past, and very gritty,” Wasserman said while sitting in her office at CUNY’s Graduate Center, where she directs the Gotham Center, an organization that promotes New York City history. “It was also very much from a female perspective, which I hadn’t seen before.”

That was the same reaction that Alice Kessler-Harris, professor of American history at Columbia University, had when she read Yezierska’s writing while she was working on her dissertation at the New York Public Library in 1967. It was Kessler-Harris who single-handedly brought Yezierska back into print by relentlessly, over five years, taking a photocopy of the out-of-print “Bread Givers” to publisher after publisher and trying to persuade each to reprint it. In 1975, George Braziller and later Persea Books reprinted it, and it has sold more than 100,000 copies since then.

Yezierska’s own story finds echoes in her fiction and yet, in some ways, is far more dramatic. She was one of nine children, born in a small town, a shtetl called Plotsk in Russian-ruled Poland around 1882 (no one knows exactly when). The family came to the Lower East Side in 1890. She was the youngest child, constantly battling with her father. She left home at 16 and went to night school while working as a domestic, and then at a sweatshop and at a laundry, before she convinced a philanthropist to pay for her to go to Columbia University’s Teachers College so that she could become a home economics teacher.

She published her first short story in 1915. In 1917, at Teachers College, she met educational philosopher John Dewey, a married WASP 20 years her senior, and they fell madly in love — though the affair was probably unconsummated. He persuaded her to leave teaching, which she hated, for writing. Her short story “The Fat of the Land” was published in 1919, and one critic called it the best short story of the year. Hollywood was soon calling, and one of her short stories, “Hungry Hearts,” was bought by Samuel Goldwyn for $10,000 and made into a silent movie.

She moved to Hollywood, but soon became disenchanted with the glitz and by the lack of connection to real life, despite being offered a three-year contract. “Sweatshop Cinderella” was the name she was given by a Goldwyn’s publicist. She first acquiesced to the tabloid nickname and then bridled at it. She returned to New York City and wrote “Bread Givers,” as well as a number of other novels and short stories, before falling into obscurity and poverty. Yet she continued to write, even as an old woman, and those previously unpublished short stories are now included in one of Persea’s collections“The Open Cage.”

Wasserman uses photographs and clips from the silent film “Hungry Hearts,” alongside interviews and excerpts from Yezierska’s works, to create the 26-minute documentary. Yezierska was really the first woman to write English in a Yiddish idiom, and she did so consciously. “I want some day to make myself for a person and come among people,” is a line that is repeated throughout her fiction as the Jewish women immigrants in her stories struggle to make it in America and to “pass” as Americans. Those repeated themes help to explain the power that her fiction still has for those who read it — especially to first- and second-generation immigrant students and those who are the first in the family to attend college.

As a writer, someone who wrote obsessively on the backs of grocery bills, wrapping paper and scraps of paper, she was clear about what she was doing. “It’s all about the I — about the family,” she said in an oral history interview, the only extant tape of her voice that Wasserman found among her papers at Boston University. “And you have to go down into the dirt and mud to see the I.”

Yezierska died in 1970, five years before “Bread Givers” was republished. Later, her short stories were republished, and then came the gush of interest in her work. “She has a mixed legacy,” Wasserman said. “She was stuck in the past, but also inspired by it. I feel like what she did was worth a lifetime as a writer.”

Jessica Siegel is a freelance writer and assistant professor of journalism and education at Brooklyn College.

Watch the trailer for “Sweatshop Cinderella” below: