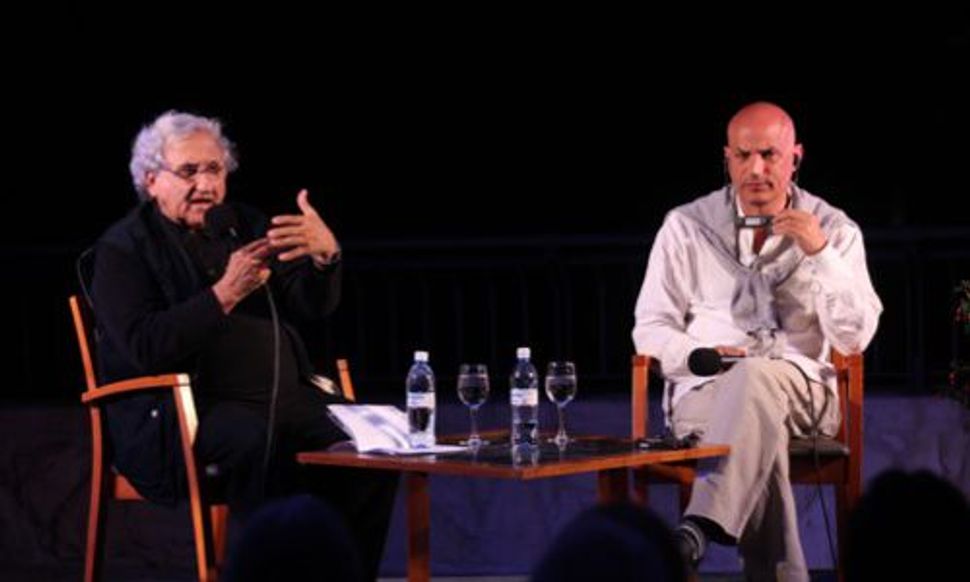 “Do you believe that there’s a God?”
“Not before dinner there’s not!”

Watching A. B. Yehoshua and Daniel Mendelsohn discuss the problems of representing the Holocaust and coming to grips with antisemitism was a little like watching those old conversations between me and my girlfriend. Mendelsohn, while a superb writer and producer of one of the most thoughtful and provocative books relating to the Holocaust this century, was essentially on book tour mode and was unprepared, perhaps, for Yehoshua’s relentless interrogation of the Jewish condition in literature.

The dialogue on Wednesday evening started off inauspiciously. Simultaneous translation allowed Yehoshua to speak in Hebrew while Mendelsohn listened in English and vice versa (with the audience putting on translation headphones as individually appropriate). After Yehoshua’s opening words in which he recounted his own personal experience of the drawbacks, reservations and lacunae in both literary and academic portrayals of the Holocaust he asked Mendelsohn what his experience, in another, younger generation was of those problems.

Mendelsohn’s initial response to this provocative starting point was to point out two items of “logistics” — that the seats saved for his family had been taken and that he would certainly return the translation headphones whether or not he had left a deposit for them. He was indignant that he’d spent “years of my life searching for my mishpocha and then my Israeli mishpocha have to sit at the back.” His plea was successful but set the tone a little for a dialogue that only ever threatened to rise to the truly significant.

Mendelsohn’s excellent book “The Lost: A Search for Six of Six Million” and the consistently incisive analysis of his critical writing clearly suggested to Yehoshua and the organizers of the conference a worthy partner. Empowered by his reading of “The Lost,” Yehoshua framed questions about the nature of the Holocaust and its representation through history, the constitutive elements of Jewish identity and the reasons for the pervasive, enduring and ubiquitous nature of antisemitism.

The success of this enjoyable and interesting panel can be measured by the ambitions of its failure. It didn’t transcend, it didn’t solve any problems, it didn’t provide new insight into the questions raised by Yehoshua. But the salutary framing of the questions by the Israeli author and the concrete examples provided by the American made this one of the highlights of the Festival.

Watch A. B. Yehoshua tell the Forward what comprises the absolute crucial question in Jewish life today.

A.B. Yehoshua Talks to the Forward from Jewish Forward on Vimeo.