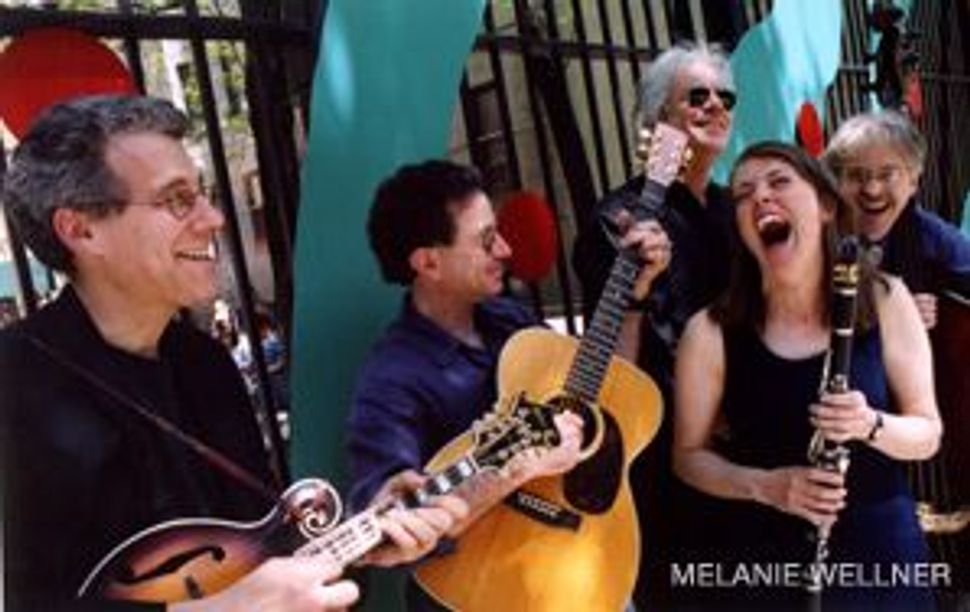 First there was bluegrass, then there was newgrass and now, perhaps inevitably, there is Jewgrass. It’s not yet a trend. Call it a development. You can find it in New York, Denver and suburban Washington, D.C. It’s still rare enough to sound like a high-concept gag — Jed Clampett in a tallis — but it’s not. 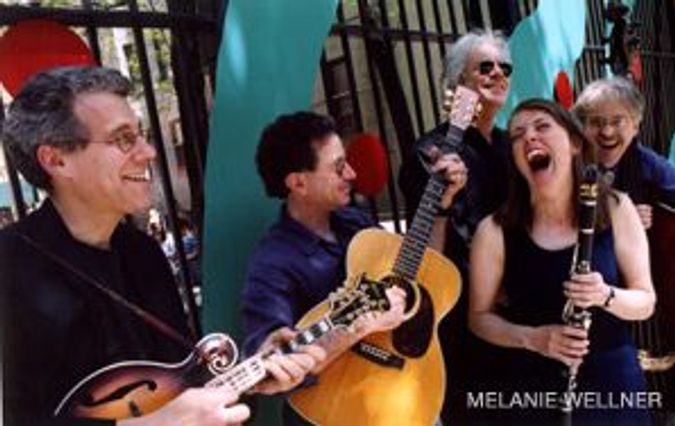 Jews have been playing bluegrass since the folk revival of the late 1950s and early ’60s made it clear it that bluegrass wasn’t just for hillbillies anymore. That revival transformed a rather small niche within commercial country music into what looked like a modern — and authentic — folk music, open to city kids who disliked the shiny surfaces of late-’50s pop. Because of this, there have been genuine Jewish bluegrass heroes, like David Grisman and Andy Statman. But Jews playing bluegrass are not necessarily Jews playing Jewgrass. This type of music requires real Jewish content, whether it’s lyrics or music or both. You could say that Jewgrass is American-roots music with an Old World accent, or Jewish roots with a down-home twang.

Oddly enough, bluegrass is well suited for this kind of ethnic makeover. For all its Appalachian origins, bluegrass is, like most forms of music, a hybrid. Its musical structures can be a little rigid, but you can hang a lot of stuff on them. To be sure, bluegrass came from the hill country of the South, but people who listened to the radio invented it. They were virtuosos who played swing jazz on the mandolin. They knew what blues sounded like. They just never had heard of klezmer.

As the name indicates, the group Margot Leverett and the Klezmer Mountain Boys is trying to remedy that. The most prominent Jewgrass band at the moment, the musicians blend classic bluegrass with what could be called classic klezmer by whipsawing from one to the other within a single song. The configuration of its instruments is more klezmer than bluegrass. Leverett, who was one of the original Klezmatics, is a classically trained clarinetist. She claims that for years, bluegrass musicians were leery of her, precisely because the clarinet is unimaginable in bluegrass. (What’s more, her band doesn’t have a banjo.) Nevertheless, because she keeps good company now (her fiddler and her mandolin player are famous in bluegrass circles), she has begun to gain acceptance — and not just in New York, where she lives. The Klezmer Mountain Boys play gigs around the country and even received a standing ovation in Kentucky, the mothership of bluegrass.

According to Leverett, the musical marriage between the Appalachians and the Carpathians is a natural. Beyond the similarities between the peoples themselves (both poor, nostalgic for home and quite religious), “klezmer and bluegrass come from the same place in the human heart,” she said. They’re both soul music for the dispossessed.

While the mountain folk of the South and the Jews from the Pale might have been religious, Margot Leverett and the Klezmer Mountain Boys do not play religious tunes. Bulgars, medleys of songs by Bill Monroe and lullabies, maybe, but not sacred melodies from either tradition. This isn’t true of other Jewgrass bands. Shalom Feivel and Rocky Mountain Jewgrass plays overtly religious music, although of different kinds, as do the Sinai Mountain Boys.

Saul Rosenthal, aka Shalom Feivel, works in media relations by day and is a cantor on the weekends. His band got its start playing Sabbath services at his conservative synagogue in Denver. Its origins in synagogue are clear in the songs the players sing: bluegrass versions of “Shalom Aleichem” and “Al Tizkru”; a western “Mah Tovu,” complete with yips and yahoos, and a folkie “Y’varechecha.” They also do some outright shtick — a Yiddish “Home on the Range” (for which finding a translation for “buffalo” proved to be a problem), and a funny song about the Seder. For all that, Rosenthal’s stage patter and shtick serve a serious purpose. Like the music itself, they are meant to create what Rosenthal calls “an additional portal to Jewish experience,” a way of speaking to Jews and non-Jews alike.

Rosenthal says that his band is to bluegrass as “sherbet is to Häagen-Dazs.” In other words, the two entities might sit on the same shelf in the store and they might have some of the same ingredients, but sherbet, good as it might be, just isn’t ice cream. The same can’t be said of the Sinai Mountain Boys, four observant musicians from Silver Spring, Md., who play straight-ahead Ben & Jerry’s bluegrass. The band doesn’t include any Hebrew in its songs, but does sing of holidays, Jewish heroes and great rabbis. The boys don’t do klezmer, and they don’t do shtick. They do, however, weave Hasidic melodies into their songs. In fact, Robbie Zev Ludwick, a baal teshuvah who used to be a heavy metal bassist (he was known to his friends as the “Motley Jew”), describes his music in Hasidic ways, though not necessarily in Hasidic terms. For Ludwick, bluegrass is an announcement of joy, an expression of faith and a form of “subliminal seduction” aimed at both seculars and Christians. He wants to show them all that observant Judaism is cool.

Given their commitment to Jewish Orthodoxy, it’s hardly surprising that members of the Sinai Mountain Boys have reworked some of bluegrass’s religious songs — for instance, they turned “Somebody Touched Me” into “Hashem Touched Me.” Ludwick has a deep respect for gospel music, because it lends a voice to those who are “true of heart and pure of faith.” But, for obvious reasons, the Sinai Mountain Boys won’t touch any tune that mentions Jesus.

And there’s the rub: Bluegrass’s lyrics, like country music’s, have always been overwhelmingly Christian. So Jewgrass shouldn’t really be imaginable, let alone possible. But it has been. Quarantined by folk music and adopted by a large Northern constituency, bluegrass can pass as a real-live heritage for us all. It doesn’t feel like an industry product associated with a particular group and a specific region.

The same cannot be said for country and western. A few years ago, Lenny Solomon, a Boston folkie with a wicked sense of humor, noticed, on a country listserv, a long conversation about Jews. The question was simple: Why are there no Jewish singers in country music? For Solomon, the answer was easy (so easy, he even wrote a song about it, called “Jews in Country Music”). Country music might well be citified now, but the urban cowboys who make it and listen to it are clear in their self-definitions: They’re Southern and Christian. (Because he has been such a good satirist of the whiskey-women-cars-and-Christ mainstream, Kinky Friedman doesn’t really count.) As Solomon says, all country singers cut Christmas albums. Brigid Kaelin, who recorded a successful novelty EP of country-ish Hanukkah songs last year, called “Mazel Tonk,” says basically the same thing: Jewish songwriters might be able to write about the little church on the hill, but they can’t sing about the little synagogue down the street.

So it’s something of a surprise to find that actress Mare Winningham came out with a country Jewgrass album last year. Technically speaking, “Refuge Rock Sublime” isn’t bluegrass. True, it is largely acoustic, but most of its songs are slow waltzes — bluegrass prefers a very brisk 4/4 time — and it is, in its way, more old-timey than bluegrass itself. It doesn’t depend on breakneck virtuosity or complicated vocal harmonies. Beyond its fiddle-and-mandolin adaptations of Hebrew prayer, a country weeper or two and some slow religious ballads, it also contains music that could come straight out of an early 19th-century Christian hymnal. In other words, Winningham has come up with something eerie and often quite beautiful: the first country gospel album for Jews.

There are some early indications that Jewgrass might actually have legs. Margot Leverett and the Klezmer Mountain Boys have a following and are in the process of recording a new CD. The Sinai Mountain Boys are also in the studio and, like Rocky Mountain Jewgrass, are beginning to play to wider (and non-Jewish) audiences at bluegrass and folk festivals.

In the end, this success and the rather uncanny weirdness that makes Jewgrass so interesting also poses a problem. Jewgrass musicians are either pioneers or outliers, and their music will either become an innovation or remain a novelty.

It’s hard to know which to hope for. If the viral creativity of the Web helps it go mainstream, Jewgrass will lose its weirdness and will most likely fall into to a series of easy clichés. And both Judaism and bluegrass have more than their share of comfortable conventions. On the other hand, if Jewgrass remains just weird, then its seriousness — as music and as an expression of Yiddishkeit — will lose out to its sheer peculiarity. So Jewgrass faces the dilemma of all hybrid forms and composite names. Its future will depend on which half of this new-fangled term — the Jew or the grass — prevails.