Springing From The Tar Heels 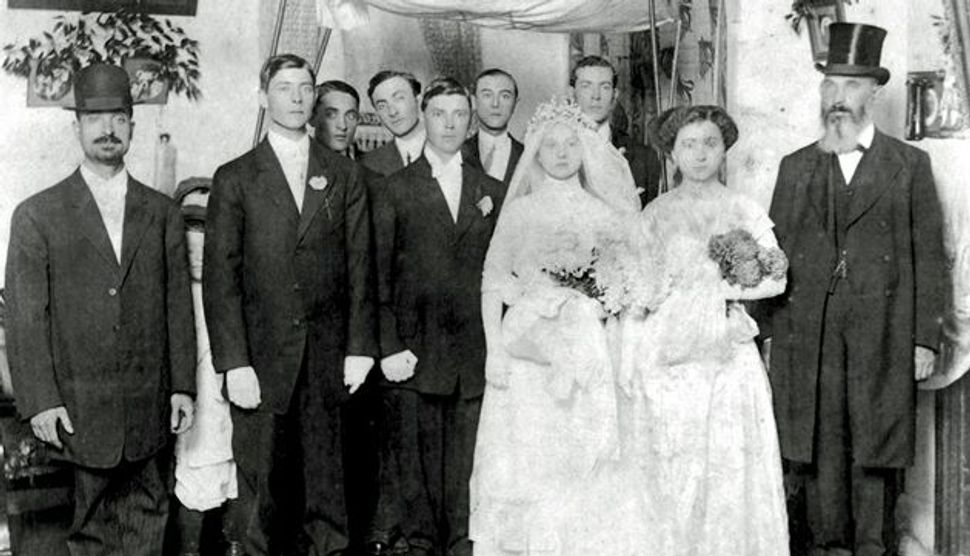 Southern Belle-a-busta?: The Joseph and Celia Lipman wedding party gathers under the chuppah in New Bern, N.C., in 1911. Image by IMAGE CoURTESY oF ELBERT LIPMAN

The long history and deep roots of Jews in the Tar Heel state are coming to life in an ambitious new multimedia project that kicks off June 14 with an exhibit at the North Carolina Museum of History in Raleigh.

“Down Home,” which encompasses a slickly produced documentary film and handsomely illustrated coffee-table book, celebrates Jewish contributions to North Carolina social, civic and commercial life. But the project also aims to capture a nearly vanished way of life for Jews in the state’s mill and market towns, according to Leonard Rogoff, an organizer of the project and historian at the Jewish Heritage Foundation of North Carolina, which is producing “Down Home.”

“Elderly Jews who lived the rural small-town experience are an endangered species,” said Rogoff, who also authored the companion book, “Down Home: Jewish Life in North Carolina” (University of North Carolina Press, 2010). “Synagogues have shuttered in cities like Tarboro and Lumberton. Smaller communities are expiring. We need to document them.”

The project “tells an important part of our state’s story,” wrote Linda A. Carlisle, Secretary of the North Carolina Department of Cultural Resources, in an e-mail to the Forward. “Jewish culture has helped shape North Carolina in its rural areas as well as its urban centers for centuries.” North Carolina’s state legislature kicked in $350,000 toward the project’s $1.25 million budget, according to Rogoff; the rest came from foundation grants and individual donations.

The investment has paid off with research that “contributes new insights into Jews in the South,” Rogoff said. “Histories typically focus on the pre-Civil War era and German-Reform Jews as normative southerners. We’ve emphasized the East European experience in the New South as well, and it’s updated to include the Sunbelt.” Rogoff’s team at JHFNC is also creating classroom material for 4th- and 8th-grade “People of North Carolina” courses in the state’s public schools with talks about expanding the lessons “across all grades and disciplines,” he said.

According to Rogoff, the “Down Home” project tells stories of Jews from Joachim Gans, who arrived on Roanoke Island on Sir Walter Raleigh’s expedition in 1585, to Jacob Henry, who in 1809 delivered a speech in defense of religious freedom after his right to serve in the state legislature was challenged. And it spotlights civil-rights era heroes like Harry Golden, publisher of the esteemed The Carolina Israelite newspaper, “known nationally for his civil-rights advocacy, delivered in a Lower East Side accent,” Rogoff said.

In a folksier vein, the book, film, and exhibit highlight experiences of prominent, prosperous families like the clan of Eli Evans, whose own history provides one narrative thread of the “Down Home” project. Evans’s paternal grandfather was an immigrant peddler, his mother’s father a shopowner; his businessman father, Emanuel, became a wildly popular six-term mayor of Durham in the 1950s, and his mother Sara served on Hadassah’s national board for 40 years. Now a New Yorker, Evans himself went on to write what many consider the definitive history of southern Jews, “The Provincials” (University of North Carolina Press, 1973), which has continuously been in print for nearly three decades.

“The story of the Jews is the untold story of the South,” said Evans, a onetime speechwriter for President Lyndon Baines Johnson who, after serving from 1969 to 1977 as a senior executive at the Carnegie Corporation, went on to run several charitable endowments, including the Revson Foundation. “The region has whatever image it has from whatever violence there was. But that’s not the story of the Jews. Ours is the story of successful integration and good relationships.”

The Jewish experience in North Carolina was unique in the South, Evans said, because North Carolina was unique in the South. “We didn’t have a strong Klan in our state. We had a commitment to public education, a more moderate political atmosphere, and enlightened political leaders,” he said. “I’m not saying no antisemitism existed. But there was a philo-Semitism that manifested itself in many ways.”

The exhibit itself, which will travel across North Carolina over the next year, uses artifacts and photos to recreate a series of “environments”: A synagogue sanctuary, dry-goods store, family Sabbath table, and a study based on Harry Golden’s Charlotte home. The 81-minute “Down Home” DVD documentary, (available through the JHFNC’s website), complements the museum show with a somewhat academic mix of archival footage, insightful interviews and unfortunately costumed re-enactments.

While the exhibit’s partly intended to educate North Carolinians about their own history, Rogoff said he hopes “Down Home” might reach other Jews — especially from the Northeast. “All native southern Jews have humorous stories about meeting New Yorkers who cannot believe that Jews actually live in the South,” he said. “They associate a New York accent, not a southern drawl, with being Jewish. That’s a very old cliché. New Yorkers especially can be terribly parochial, and the famous Saul Steinberg cartoon of a terra incognita beyond the Hudson aptly illustrates their provincialism.”

While it spends a lot of time looking back, the “Down Home” project also suggests a Jewish southern future that looks increasingly suburban and metropolitan. “Jews are finding opportunities in the hospitals, universities, research laboratories, and financial centers that have typified the development of the state’s post-industrial economy,” said Rogoff. “North Carolina is especially inviting for two-career couples where both are professionals. Newcomers who explore the local Jewish communities generally report finding warm welcomes, contrasting the neighborliness with what they found up north. You get a heckuva lot more house for the money, and the climate is a whole lot better.”

But one area where Rogoff admitted the North may have an edge is bagels. “There isn’t much aside from the ubiquitous Bruegger’s,” he said. “Cary [near Raleigh] and Chapel Hill have independent bagel makers, but a really good deli and Jewish-style bakery are opportunities waiting to happen. “

“Down Home” runs through March 6, 2011 at the North Carolina Museum of History, Raleigh, N.C.

Springing From The Tar Heels