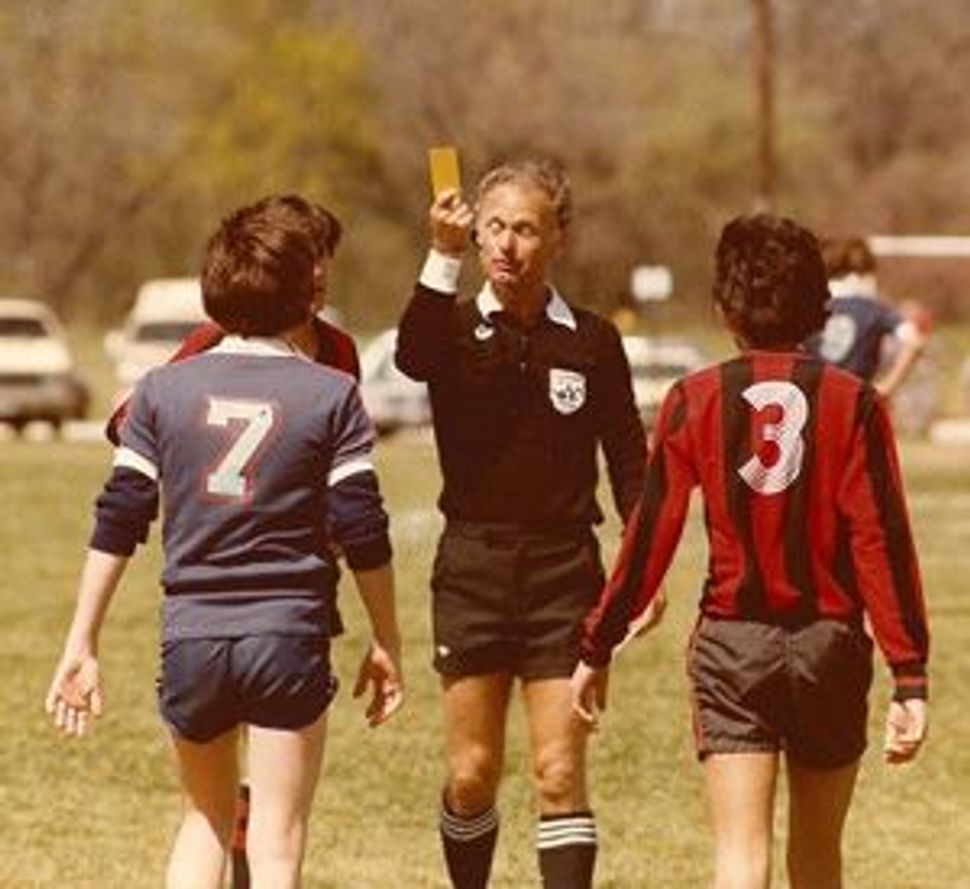 All Men Are Equal: Referee Klein books youngsters in Dallas with the same firm decisiveness as he does players in the World Cup. Image by Courtesy of Abraham Klein 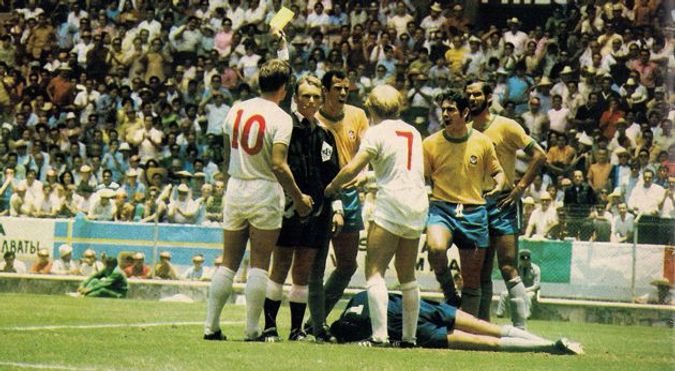 Booked!: Referee Klein calmly books Francis Lee (England No. 7) for a foul on the Brazilian goalkeeper Felix, as Geoff Hurst and Brazilians look on. Image by COURTESY OF ABRAHAM KLEIN

As any soccer fan will tell you, it only takes seven games to win the FIFA World Cup once you’ve qualified for the final tournament. Unfortunately, Israel has reached the finals just once — Mexico 1970 — where, after losing to Uruguay and tying with Sweden and Italy, it failed to progress beyond the group stage. That year in Mexico, though, there was an outstanding Israeli success — referee Abraham Klein.

An unlikely character to march out into the blazing Guadalajaran sunshine that June afternoon, the Israeli Klein stood barely 5 feet tall. At age 36, he was one of the youngest referees at the tournament and a World Cup novice, to boot. And what was his first game? England — soccer’s mother country and World Cup holders since the previous tournament in 1966 — against Brazil, perennial contenders (winners in 1958 and 1962) and embodiment of the exuberant reinvention of the spirit of soccer as “the beautiful game.” Indeed, with the world’s best player, Pele in attack, Brazil would go on to win all six games in Mexico (after having won all six qualifying games), destroying Italy 4-1 in the final.

Klein recalled that the game “opened the gate to my career” because, though mouth-watering, matchups between major South American teams and European teams were the “most difficult games because they were different systems.”

Now a sprightly 76, Klein was eager to show me the photographs from his decades-long career on the walls of his beachfront apartment in Haifa. Long unrecognized in Israel or the world, beyond a coterie of former referees, his memoir, “Master of the Whistle,” has just been released in Hebrew. Each photograph occasions a meticulous, detailed analysis of events and his reactions to them — including contemporary vindications. For a disputed decision in the 1982 quarter final between Brazil and Italy, he referred me to a YouTube video where the English announcer confirms Klein’s decision!

Underappreciated and rarely mentioned except in criticism, referees are not mere observers or recorders, but are vital in shaping the game. Allowing it to flow while protecting the players from the other team’s deliberate or accidental fouls is a difficult task in the best of times. Every four years, under the global scrutiny of intensely partisan crowds, television replays and the pressure of expectations, the task becomes well-nigh impossible for players and referees alike. But through his treatment of these soccer-playing heroes of the world game, the diminutive Klein (who was paid a measly 10 pounds [about $20] for the England-Brazil game) won a human respect that allowed him to guide the game effectively but unobtrusively. That’s the paradox of the referee: the less he is noticed, the better he has done. 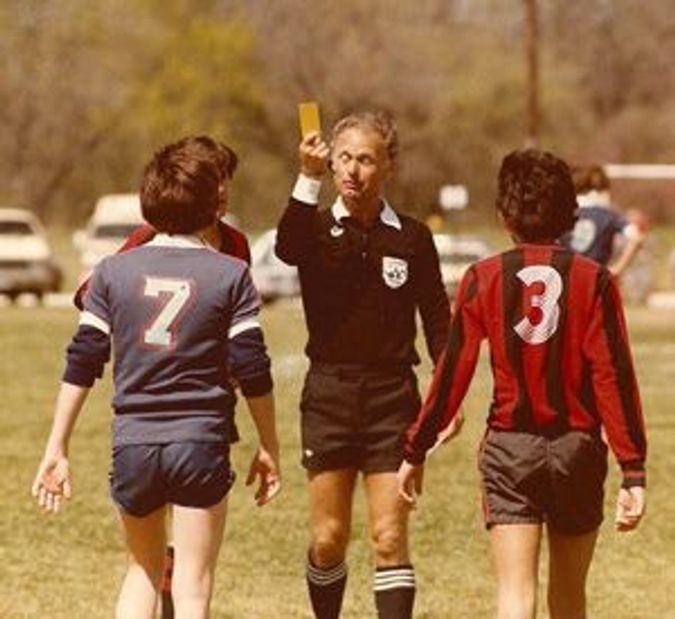 All Men Are Equal: Referee Klein books youngsters in Dallas with the same firm decisiveness as he does players in the World Cup. Image by Courtesy of Abraham Klein

And the key to going unnoticed is to have a consistently excellent view of the action and sense of the players, to be able to preempt any trouble and make accurate calls. Key to this is physical and mental preparation and the rigor of Klein’s personal preparation is clear from his 1995 book, “The Referee’s Referee: Becoming the Best” (complete with an introduction by Pele). With his co-writers, Klein outlines in extraordinary detail the mental preparation (“If you believe in something, you should try to demonstrate that belief. BELIEVE [sic] in your every decision.”), rigorous diet (including exact daily portions of carbohydrates, vegetables, fruits and dairy) and physical conditioning (Klein spent time training in the right climate to prepare for the Argentinean World Cup in 1982) that he undertook to make sure he was always alongside the play, ready to make the right decision.

For each major game that Klein refereed, he prepared intensively. In pre-Internet days, he scouted out players’ styles and reactions to referees: watching films as well as talking to players and other referees. This degree of perfectionism gives credence to his claim that, though he made errors in refereeing club games, he never made a significant mistake in a top international game. Referees are human, he told me, but their job is to make players respect a decision, even if it is wrong.

But Klein became a referee by accident. As a young man he escaped the Nazis, fleeing with his parents from Romania to Holland and then to a kibbutz in Israel. He finally arrived in Haifa at age 18 — in need of long trousers that fit him. His parents sent him to a man they knew — Jonas the tailor. When he arrived at the shop, Jonas said he was just leaving to referee an amateur soccer game, but “after the game I’ll make your trousers.” Klein went along.

During the game Jonas hurt his ankle, and turned to Klein to step in and referee.

“I tell him I can’t, but he said, ‘You know what the rules are, you blow the whistle and point which way.’” Klein recalled. “So I finished the game and the players were happy. He said, ‘Look, you are very young, I suggest that you pass the refs exam, I’ll teach you privately.’”

Klein’s father had been a player for MTK Budapest, one of Hungary’s major teams but everyone agreed that Abraham didn’t have his father’s skill. What he did have, it turned out, was a reading of the game and the application necessary to excel. After his experience with Jonas, Klein refereed army games during his national service, learning field psychology and the importance of physical fitness. After the army he officiated in increasingly important games, eventually refereeing for the top Israeli league and, in 1969, the first game between German and Israeli teams — Hapoel Nahariya against an amateur German team named Bayern Hof. He didn’t realize until 2009, when he was interviewed by a German documentarian, the significance of the event.

In 1978, Klein refereed Italy against Argentina in a tournament hosted by the latter country, still run by its military junta. The Argentineans would go on to win the tournament, but this game was the only one they lost. Klein’s tight, but correct, call denying them a penalty in the first half was met with passionate boos.

Yet his firmness and close attention won him respect from the players and, even in a crunch situation like this, he maintained tight control while awarding only one yellow card the whole game. In 2006 the average number of cards per game was about six. Brian Glanville, of the London Sunday Times wrote: “There was nothing more impressive in this World Cup than the way he stood between his linesmen at halftime in the Argentina – Italy game, scorning the banshee whistling of the incensed crowd.”

Klein officiated for Brazil many times and recounted his handling of Carlos Alberto Torres, their World Cup-winning captain while he was captain of the New York Cosmos. In a 1977 game against Toronto, Carlos Alberto (as he was known) ran up to Klein, incensed at a handball penalty decision that had been given against his team.

In the 1970 World Cup, the referee would demonstrate the first “booking” for a player with a yellow card and the second, the player’s ejection, with a red card. By the game in 1977, Klein had his red card in his back pocket, in one shirt pocket the yellow and in the other shirt pocket a souvenir card he had from 1970 to give to Carlos Alberto after the game. This was a league where referees were spat at and officials were being physically pushed by overpaid players. Klein took the irate player aside.

I had to do something. If a player comes to complain, you are supposed to use your yellow card. But the first yellow card is harder than the second. So I took the souvenir card and the yellow card and slid them each slightly out of the pockets to show him. I asked him, ‘Which one do you prefer?’ After that, I had no problems with the Cosmos for four years!

By the end of his career Klein had refereed five matches in the three World Cups of 1970, 1978 and 1982 (no Israeli referee was selected for West Germany in 1974) and an extraordinary 22 A-class games of competitive top internationals, including a “mini-World Cup” that Brazil held in 1972, to celebrate 150 years of political independence. He refereed from 1958 in Israel, from 1977 to 1981 in the short-lived but glorious North American Soccer League, and from 1980 until 2000 at the Dallas Cup, which, during that time, became one of the premier global youth tournaments. In his NASL years Keith Walker (NASL’s Director of Officals) claimed, with few demurrals, that Klein was the best referee in the world. His is a record barely matched by any other referee, and certainly not by a referee from a soccer hinterland like Israel.

So, in search of trousers, Klein found a career that allowed him to surpass his father’s soccer achievements and to supervise the sporting heroes of a generation — though the pay was so poor he continued to work full-time as a supervisor of physical education in the Israeli school system. But he never did get those pants: “I come home, I’m still waiting for the tailor. Jonas later came down to the Cosmos and found me among 60,000 people… but he didn’t have my trousers.”