If He Had World Enough and Time 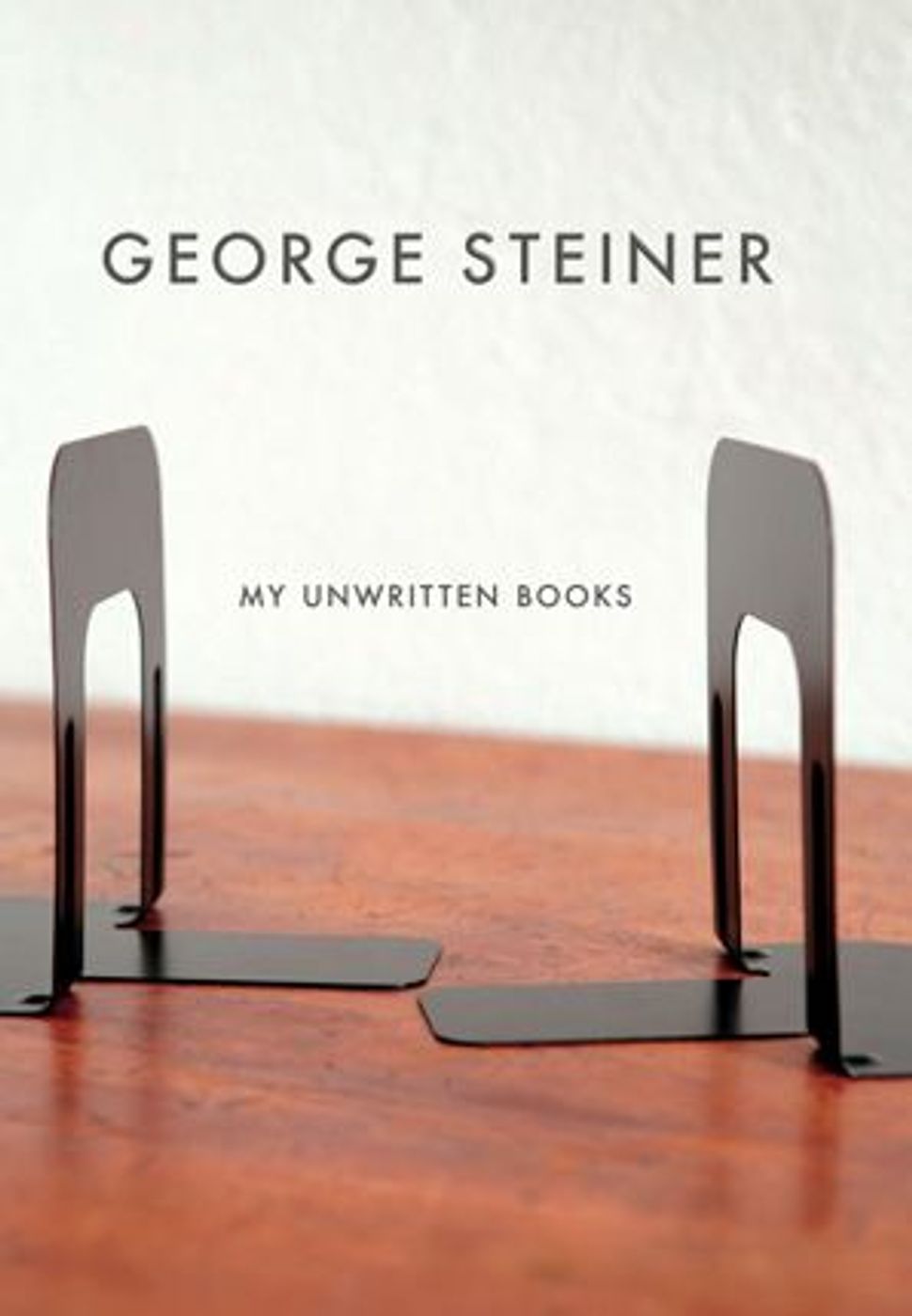 A tip for the brainy, leisurewear-oriented hipster: Type George Steiner’s name into Amazon.com’s search engine, and you’ll find, among his books of cultural and literary criticism, a novel about Hitler, a memoir titled “Errata: An Examined Life” and, of especial curiosity, a T-shirt emblazoned with a cherry-red heart that’s framed by the words “I Love George Steiner.” 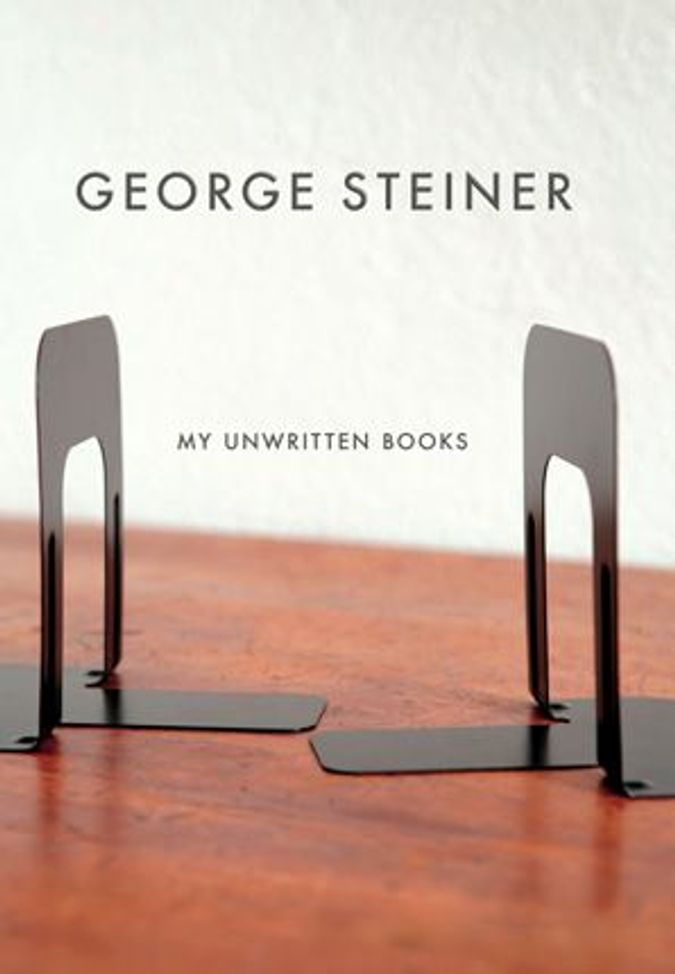 Apart from Einstein, one wonders how many other celebrated pedagogues have inspired a fashion statement. (Are there sweatshirts that sport an outline of Cornel West’s afro while on the back throng the dates from some book tour?) Irrespective of the kitschiness of such a product, Steiner has clearly achieved, over his long, peripatetic academic career, a level of distinction in excess of that lavished upon the majority of his colleagues at some of the world’s most august centers of learning. It’s fascinating, therefore, to note the sparkling filaments of regret that electrify the new book by this Paris-born intellectual.

In “My Unwritten Books,” scholarship, apologia and memoir canoodle in the twilight of reflection. Throughout the book’s seven interlocking essays, Steiner, who was born in 1929, ponders the literary byways that his work might have pursued but didn’t. Seldom were these choices arrived at because of external pressure; there is no mention of philistine publishers, overbooked schedules or insuperable family demands. Instead, Steiner attributes the deficiencies that he perceives in his bibliography to personal constraints of a thoroughly human sort.

In congruence with this rationale, the first essay in the book, “Chinoiserie,” commences with a self-portrait of youthful timidity and thumped pride. At the time of the Korean War, Steiner was working for The Economist. On one occasion, he was dispatched by the magazine’s London bureau to cover a town hall meeting at St. Pancras. On the bill for that day, to protest America’s incursion into Korea, was Joseph Needham, the William Dunn reader in microbiology at Cambridge University (where a research center has been named on his behalf). After assuring the crowd that he was a disinterested acolyte of the truth, Needham held up a shell casing that demonstrated, or so he said, that Americans were using germ warfare. Though Steiner contends that he doubted the merit of Needham’s assertion, he refrained — out of embarrassment—from voicing his reservation.

The shame that sprung out of his inability to compromise the ensuing “unanimous” show of dissent cast a wavering specter over his life. Nonetheless, in the late 1970s, when literary scholar Frank Kermode inquired if he’d pen a volume under the Fontana Modern Masters banner — a series of introductory books to the works of different Atlases of thought — Steiner hesitatingly suggested a book on Needham. The biochemist was initially rapturous at the prospect of the undertaking. But during his and Steiner’s only meeting during which the project was discussed, Steiner sought to expurgate the guilt stemming from his past reticence. After questioning the scientist about whether he actually believed that the Americans had engaged in germ warfare, the latter clammed up and the project was jettisoned. Still, while holding fast to the conviction that Needham besmirched himself by propagating false testimony, Steiner has remained in awe of the breadth of the other man’s erudition. Comparing Needham’s work with that of Proust’s, Steiner writes: “But at whatever point you enter the Proust- or Needham-world, its interior logic of relations, of point and counter point, is immediately sensible. Each particle, each sheaf in the manifold harvest of resurrection is endowed with ‘a local habitation and a name,’ but also with reticulations so vital and extended as to interact with the surrounding plentitude.”

The idea of the highly accomplished “failure” takes on cyclonic force in the book’s second essay, “Invidia.” Summoning up the mostly forgotten Italian poet and proto-scientist Cecco d’Ascoli, Steiner recounts how this contemporary of Dante has been tarred throughout the years for his supposed envy of the author of “The Commedia.” Using d’Ascoli as a scope by which to train his focus, Steiner makes a startling declaration: “But we lack a philosophic exploration, a phenomenology in depth of envy. It is the painters of emblems and allegories who have come nearest. The subject is close to being taboo, to bordering on the excremental, as Swift intuited.”

Assuming the other essays were substantially inferior to this one — assuredly they aren’t — the book could be recommended on the merits of “Invidia” alone. Watching Steiner anatomize the academic and the art world’s ability to sow the green disease, while inscribing his own experience into this account, is inordinately affecting. Twice he has heard one of his colleagues in another room receive the call signaling the awarding of the Nobel Prize. But if that might produce a tug of envy, reflect on this. “My own placement,” Steiner writes, “was made irremediable when a poet, whom I had opposed and bested in public debate, having just returned from Stockholm, looked at me and said a single mocking word: ‘Sorry.’”

Considering the disclosure that the book on d’Ascoli was not attempted because “it came too near the bone,” could it possibly come as a shock that the next essay reads like a pick-me-up? In “The Tongues of Eros,” Steiner luxuriates in his recollections of the life that he’s lived as a multilingual paramour. Upon brandishing his erudition of the ways in which different languages shape one’s experience of the world (for example, “Hopi grammars possess nuances of temporality and motion more consonant with the physics of relativity and undecidability than our own Indo-European and Anglo-Saxon resources”), Steiner delves into the linguistic differences that he has observed in the bedroom behavior of women who possess different mother tongues. These make for some of the most impressive pages of intellectually flush erotica that I’ve encountered outside of “Tropic of Cancer.”

Steiner states that he never wrote a book on the “interplay between sexuality and words,” because of the havoc it might have unleashed in his private life. Given this, one can only speculate upon how his family must feel about his disclosure in “Of Man and Beast” that his affection for his pet is such that “[i]f torturers set about my wife or children, I would cry out to them to hold fast and strive to do so myself. Were they to beat my dog or put out his eyes, I would break immediately, betraying all.”

This type of provocative honesty informs the book’s other essays, as well. In “Begging the Question,” Steiner concentrates on the reasons behind his apolitical participation in public life and for his distaste for the modern-day compulsion to divulge one’s theistic or atheistic credentials, while in “Zion” he examines his complicated relationship to his Jewish identity by gingerly looking at the practices that have sustained and endangered Jewish communities throughout the ages. These pieces will likely drum up consternation in some ranks, owing to Steiner’s very personal privileging of intellectual engagement over political action and ambivalence with regard to Israeli affairs. Of the latter, he writes:

“Essentially powerless for some two thousand years, the Jew in exile, in his ghettos, amid the equivocal tolerance of gentile societies, was in no position to persecute other human beings. He could not, whatever his just cause, torture, humiliate, or deport other men and women. This was the Jew’s singular nobility, a nobility that seems to me far greater than any other… Israel is reducing Jews to the common condition of nationalist man. It has diminished that moral singularity and that aristocracy of nonviolence toward others which were the tragic glory of the Jew.”

Though one might take issue with Steiner’s political leanings, one would be remiss to suppress his uncommon gift for mixing learning with the wash of undomesticated passion. Surely it’s that which has made someone, somewhere want to commemorate this man outside the classroom by turning himself into a walking billboard.

To be frank, the idea strikes me as less than absurd.

Christopher Byrd is a writer who lives in New York.

If He Had World Enough and Time