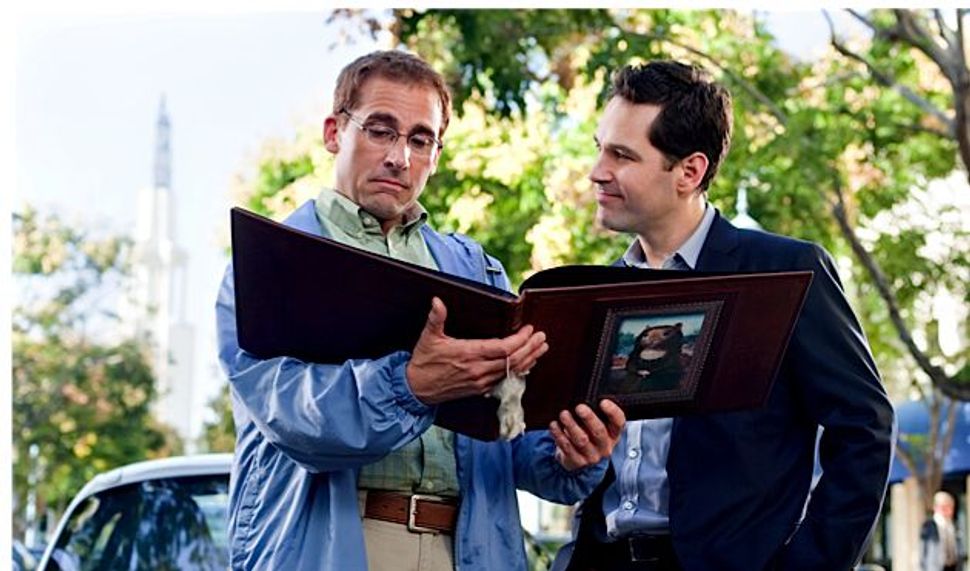 Paramount Pictures’ new laugh-out-loud comedy “Dinner for Schmucks” is only the latest in a crop of recent films and novels to idealize not the schmuck, but the schlemiel.

Directed by Jay Roach and executive produced by Sacha Baron Cohen — no stranger to the appeal of the schlemiel — “Dinner for Schmucks” is a remake of the French film “Le Diner de Cons” (“The Dinner Game”). It begins when an ambitious Tim (Paul Rudd) receives his first invitation to a monthly dinner held by his superiors for the purpose of “making fun” of the invited “idots.” The promotion he seeks might hinge on his “winning” the dinner. Tim’s girlfriend is appalled that Tim agrees to attend, and at first Tim says he won’t go, but then he literally runs over what seems like a winning “idiot,” Barry (Steve Carell), an IRS employee whose true vocation is his devotion to creating masterful dioramas of stuffed mice in various lifelike poses.

Michael Cieply, quoting critic Debbie Schlussel in The New York Times, questioned whether “schmuck” was the right term for the film’s two main characters. By the end, we see, and Tim realizes, that the real schmucks are not the invited “idiots” but the men hosting the dinner, and that the “idiots” are more worthy than the schmucks. As Tim says, “All of you would throw me under a bus to get a bigger bonus, Barry would go under a bus to save a dead mouse.” The schlemiels at the dinner are the compassionate dreamers, committed to their dreams despite society’s laughter; they are noble fools, embodiments of authentic feeling in a Facebook-AIG age of social and financial simulacra.

In “The Schlemiel as Modern Hero” (Chicago University Press, 1971), Ruth Wisse traced the schlemiel’s literary past, starting with the stories of Sholom Aleichem and then migrating to the works of Isaac Bashevis Singer, Saul Bellow, Bernard Malamud and Philip Roth. As Wisse explained, the schlemiel was born of real failure: failure as a man in a world of constrained possibilities for Jewish men. Yet, the literary schlemiel is not simply a loser, but a “loser-as-winner” — the hero of the story. We’re not supposed to just laugh at the schlemiel. He is a figure of satire that the author offers up as a palliative, a survival tactic to readers or viewers feeling similarly powerless. Malamud, Wisse wrote, presented the schlemiel “as the clearest alternative to the still-dominant religion of success.”

Similarly, these latest incarnations of the schlemiel are reactions to the dying of our boom-era obsession with material success. We’ve seen that politicians and CEOs are inauthentic and full of pretense, so these new comedies usher in the schlemiel as a romantic anti-hero for today’s recessionary age. Unlike traditional role models obsessed with the material trappings of success, these Jewish men who have reached rock bottom (or who have never left that level) are nevertheless still open and vulnerable to love and suffering and joy; to a life not necessarily defined by typical standards of career and financial success. Think of the scene in the film “Greenberg” in which Roger Greenberg, played by Ben Stiller, busies himself by building a doghouse for his brother, or when he tells his friends at a party that he is trying to do “nothing,” which an old flame calls “brave, at our age.”

These new works share the same aim as Bellow’s fiction, as described by literary critic Frank D. McConnell: to treat “the besetting disease of contemporary man: his conviction of inauthenticity — his sense that he has no real self, no real identity…” In an age in which we don’t know whom to trust, the schlemiel is refreshingly authentic. And it’s the schlemiel’s authenticity, his emotional vulnerability, his lack of pretension, that appeals to the opposite sex. Roger Greenberg’s love interest, Florence (Greta Gerwig), explains to her disbelieving friend that she likes that the title character seems “so vulnerable.”

Steve Stern’s recent novel “The Frozen Rabbi” (Algonquin Books) is likewise chock-full of schlemiels and the women who find their guilelessness appealing: Lou Ella “fretted over Bernie’s vulnerability,” and yet it is what attracts her to him; young Jocheved surmises that her beloved Shmerl “was fearless in his devotion to his friend and apparently without an ounce of guile, which made him vulnerable in ways that would surely be a burden to any woman.”

In “Schmucks,” the first scene between Tim and his girlfriend, Julie (Stephanie Szostak), has him overflowing with praise for her, gushing about how beautiful, smart and successful she is and how much he loves her. He proposes to her, for the second time, that day. Tim has the exuberance and emotional lack of restraint of a schlemiel. This is not how the traditionally more-restrained waspish romantic hero acts. A schlemiel is a failure as a man, according to the “Anglo-Saxon model of restraint in action, thought, and speech,” as Wisse put it. The schlemiel’s reveling in the muck of emotions is contrary to the prevailing ethos of gentile American culture: He is the embodiment of the overemotional, overly mothered Jewish man, the antithesis of the traditional masculine hero. Yet, honesty has its virtues: What you see is what you get. A schlemiel is not a philanderer. And he’s an optimist: Barry sees everything in a positive light. He’s constantly beaming.

Indeed, the film opens with Beatles’ lyrics that make it clear the filmmakers had the elevation of the fool on their minds: “The fool on the hill, sees the sun going down, and the eyes in his head see the world spinning round… and nobody seems to like him, they can tell what he wants to do…He never listens to them, he knows that they’re the fools…” We hear these words as we see the amazing stuffed mice that Carell’s character has meticulously crafted into mice versions of himself and his ex-wife when they were still in love. This devotion to work is his passion: one antithetical to the buying of distressed companies by Fender Financial.

The schlemiel insists on pursuing his dreams. Barry’s winning presentation at the dinner is a series — what he calls “The Tower of Dreamers” — of mice dioramas of famous men who dared to dream, ignoring the naysayers around them: the Wright Brothers, Evel Knievel, Van Gogh (“Everyone told him,” Barry says, “that he can’t paint — he only has one ear”), Ben Franklin, Louis Pasteur. Like these famous dreamers, Barry is an eternal optimist, an essential trait of the American Jewish schlemiel: The schlemiel refuses to give in to life’s futility, maintaining optimism while recognizing the pointlessness of it all. All schlemiels embody a paradox, as Wisse put it, “that the knowledge of life’s futility, reinforced by daily experiences, does not invalidate an urgent insistence on joy, irrational as such emphasis may be.”

Like billionaire Purdy to the schlemiel protagonist Milo in Sam Lipsyte’s recent novel “The Ask,” or Elliot to schlemiel Seymour in Simon Rich’s “Elliot Allagash,” many of these schlemiels have a foil, a man with incredible wealth who seems to have the world at his fingertips. In “Schmucks,” Barry’s foil is the tall, blond Müeller (David Walliams), a man whose inherited half-billion fortune automatically deems him the conqueror. Until the last few frames, he even wears a ring imprinted with the family insignia: To the victor go the spoils. But maybe the wrong spoils. The schlemiel, it seems, wisely knows to value love over career and wealth, or perhaps he doesn’t have the choice: He doesn’t have wealth, and so he becomes a romantic. As Wisse wrote, he “continues to dream, or to fight for love, or to seek it.”

At the end of “Schmucks,” having lost any chance of receiving that promotion, Tim, distraught at having seemingly lost Julie to an oversexed artist, declares to Barry, not knowing that Julie is listening, that he wanted that promotion only to impress her. “She’s the greatest thing in my life. God, I’m an idiot,” he says. It’s almost as if his calling himself an “idiot” unlocks the key to the girl’s heart: Julie overhears him and realizes that he truly loves her. Calling himself an idiot is a proxy for saying he’s a sincere, non-narcissistic man, that he loves her more than the office he coveted on the seventh floor.

Alas, if it’s a choice between a schmuck and a schlemiel, which in film, if not in real life, seem to be the only alternatives, these filmmakers and writers are saying that the girl is better off choosing the schlemiel. In a tough, recessionary world, perhaps one’s better off with a romantic wearing rose-colored glasses than with a hard-nosed realist.

Laura Hodes’s most recent piece for the Forward was a review of Joshua Braff’s novel “Peep Show.” She blogs at www.personalpolitic.blogspot.com.

Watch the trailer for “Dinner for Schmucks” below: