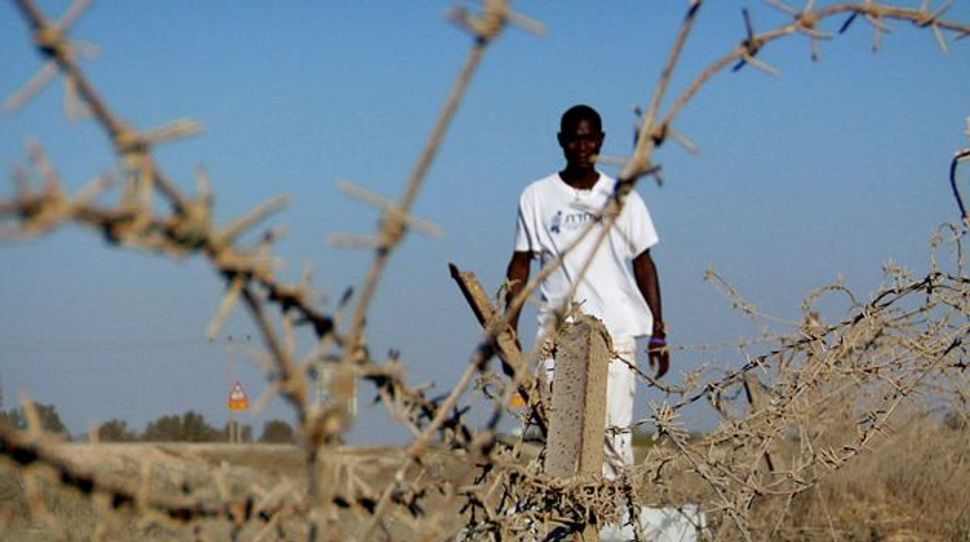 Barbed Memories: Adam Bashar, pictured at the Egypt-Israel border which he crossed for refuge, escaped death in Darfur but not the politics of Sudan. Image by COURTESY OF RIGHTEOUS PICTURES

It’s an irresistible pitch: Take a Holocaust survivor who has worked to combat Holocaust denial, and combine her story with those of three other genocide survivors, respectively from Rwanda, Congo and Darfur, to show the need for “Never Again.” It is, sadly, a pitch “The Last Survivor” does not live up to.

In its present form, the film introduces the cause that it champions, but it remains an educational provocation rather than a powerful work. It reminds rather than convinces, it encourages rather than compels. And that’s a shame, because, its indisputably urgent message aside, the film shows tantalizing glimpses of what it could have been.

For example, in an optimistic reading, “The Last Survivor” is about the power of transmission. In the hope that the film itself will prevent these atrocities from continuing, we see the survivors passing their stories forward. Hédi Fried, a Holocaust survivor, tells her story to a spoken-word artist whose performance is intercut with Fried’s own words. David Gewirtzman, another Holocaust survivor, talks to Jacqueline Murekatete, who, inspired, goes to high schools and, eventually, the United Nations to pass on the message about the Rwanda genocide she survived. Adam Bashar, a Darfur refugee in Israel, says he’s going to take the seed from Israel to grow the tree of Sudanese democracy.

This all sounds good in theory, but in practice the film does little to support this theme or, indeed, to either link or separate the different genocides. Justin Semahoro Kimenyerwa — rescued from the Congo and placed in St. Louis — has started an organization to document and preserve the “beautiful and unknown culture of the Banyamulenge people.” But we don’t find this out until the credits roll.

So, while we see enough to believe that the characters are charismatic or compelling, they are neither fleshed out nor fully presented. Rather than having confidence in the characters and making a film about the special bond between Gewirtzman and Murekatete or the different refugee experiences of Bashar and Kimenyerwa, directors Michael Pertnoy and Michael Kleiman cram them all in.

Neither plausibly related nor thematically interwoven, the characters sit uneasily with one another — a fact noted implicitly at screenings where the directors are continually asked how they found the stories. An affecting sequence in which Gewirtzman explains how he saw horrific footage of bodies in Rwanda and felt that the Holocaust had come back again is almost the last we see of him. He inspired Murekatete, we are told, but the nature of the inspiration and its practical manifestation are barely touched upon.

Kimenyerwa’s two songs — the first of which he performs alone in his room, and the second in the St. Louis church community that he has embraced — are deeply moving. His sung professions of faith in God and humanity, given his own experiences and those of his people, convey some of the profound feelings that go hand in hand with survival. But too often we just see him laughing on a series of different phone lines as his mentor and savior, Sasha Chanoff, laughs back.

“The Last Survivor” functions, then, as a superficial introduction to a number of different types of survivors of different genocides. Righteous Pictures, the film’s production company, says it is “committed to creative, character-based, global projects as a platform for dialogue on the most critical issues of our time.” The company’s mission is worthy, but it doesn’t say anything about quality of art, and that’s just about right for a worthy film with limited power.

Dan Friedman is the arts and culture editor of the Forward. Contact him at [email protected]

Watch a trailer for “The Last Survivor”: