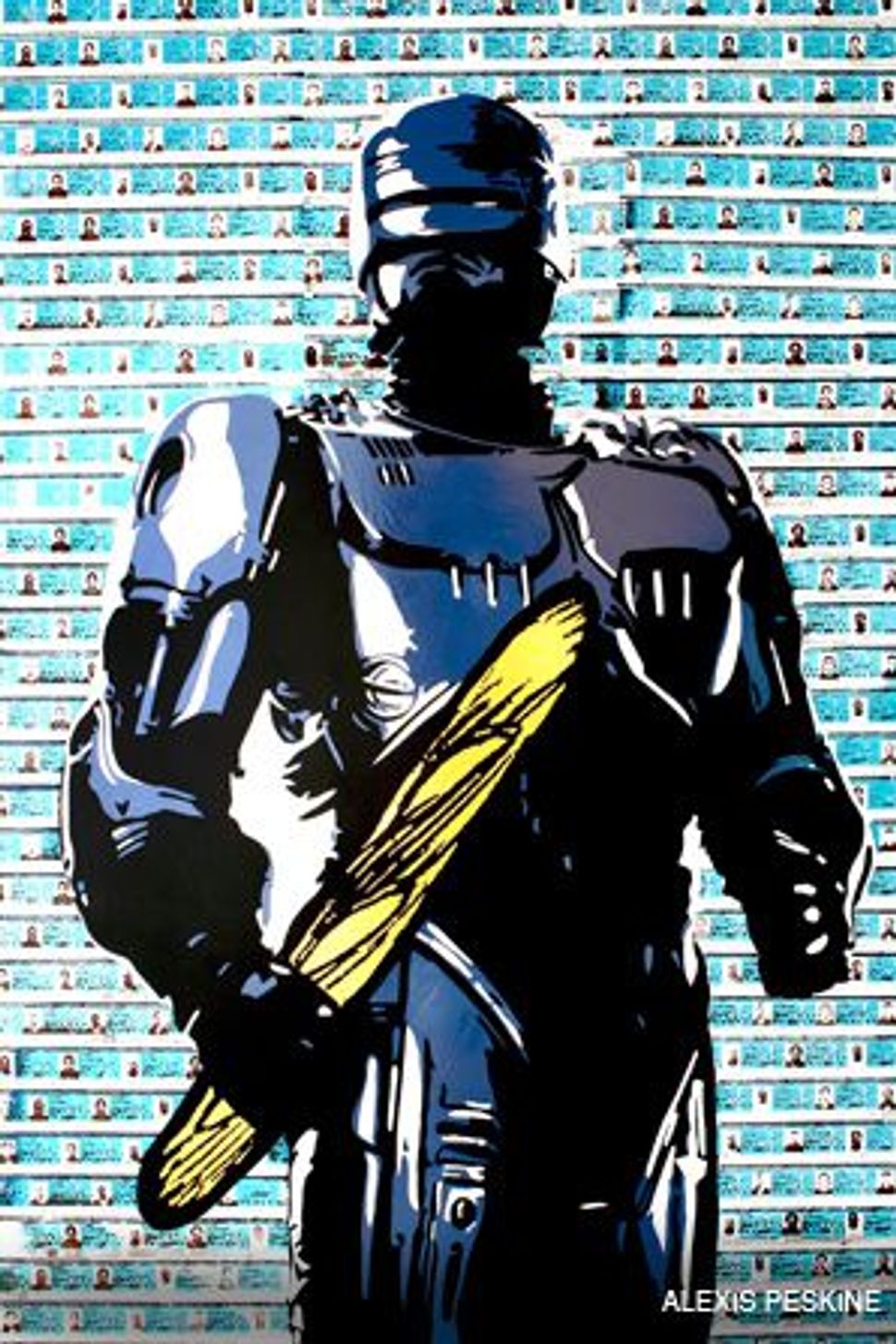 CRUSTY: ‘Motif,’ an image of the 1987 movie character Robocop holding a baguette goo?ly illuminates the tension between a feisty French police force and a bready symbol of French re? nement.

In the summer of 2005, the suburbs of Paris went up in flames. Television screens and newspapers were filled with images of frustrated Arab and African youths, most often the unemployed children or grandchildren of immigrants, burning and slashing the already dour infrastructure around them. It was a sight that many observers thought mirrored the frustration seen throughout the Middle East. In any case, the riots in the French suburbs were the sign of a vexing European crisis. 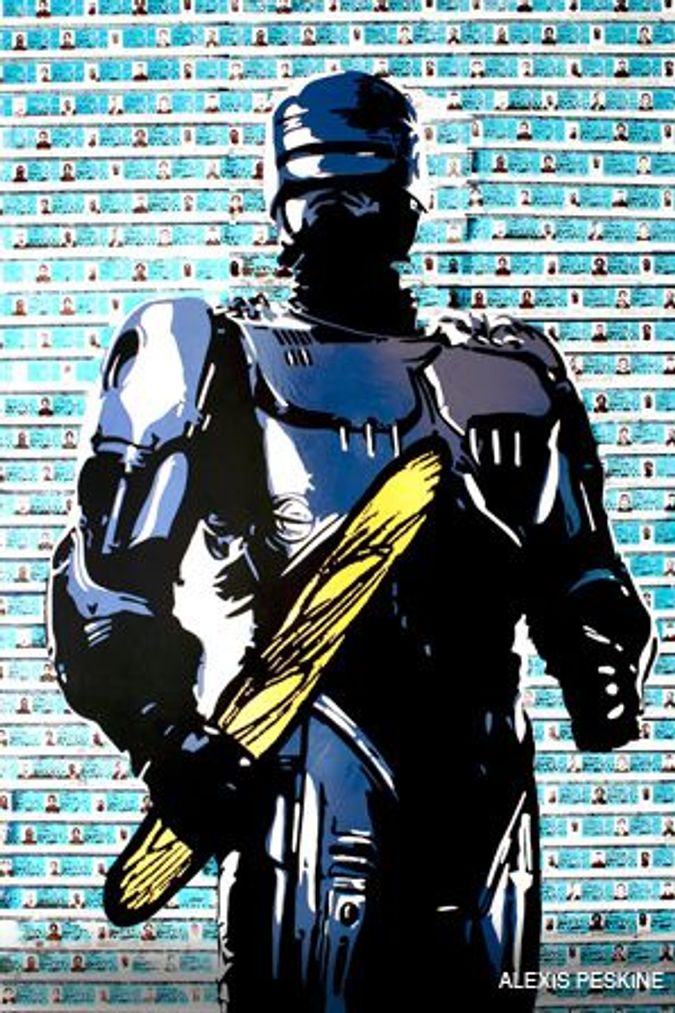 CRUSTY: 'Motif,' an image of the 1987 movie character Robocop holding a baguette goo?ly illuminates the tension between a feisty French police force and a bready symbol of French re? nement. 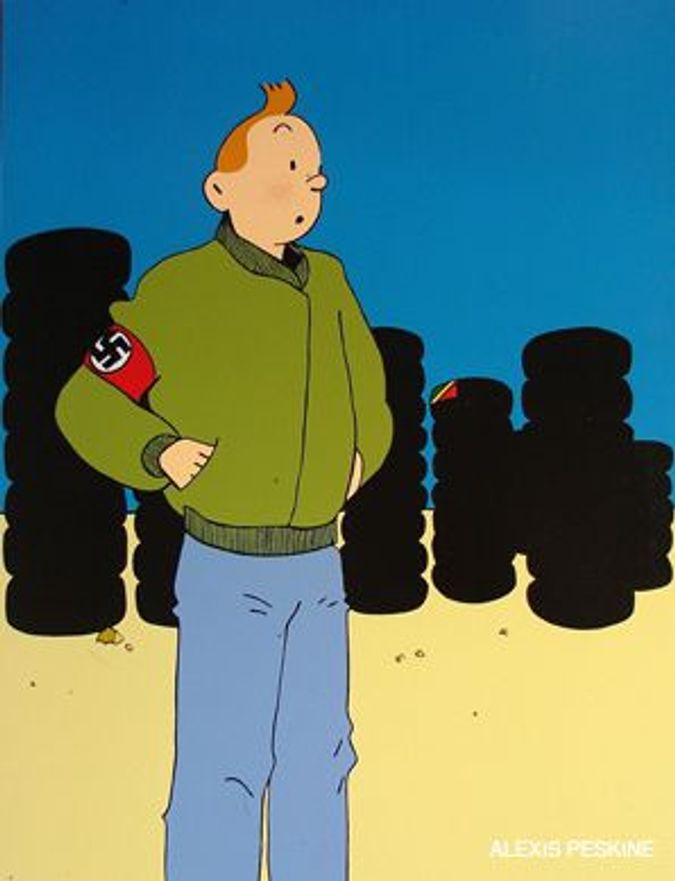 IN CHARACTER: In 'Tintin and Your Kids,' the famed character is recast as a swastika-clad skinhead. In the background, a Congolese flag is minimally visible on a pile of tires. 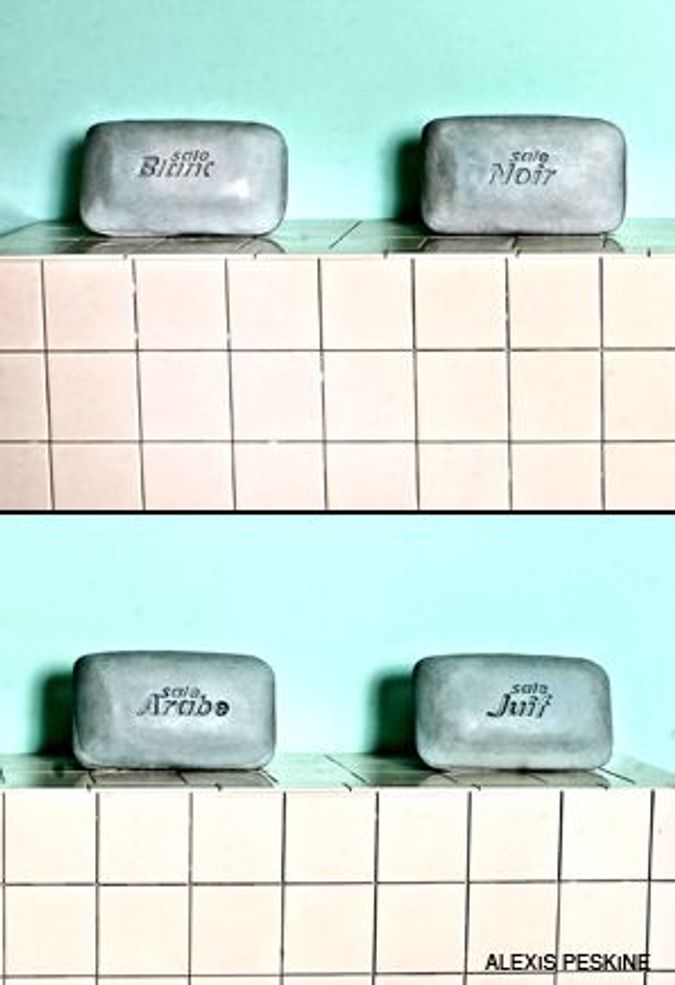 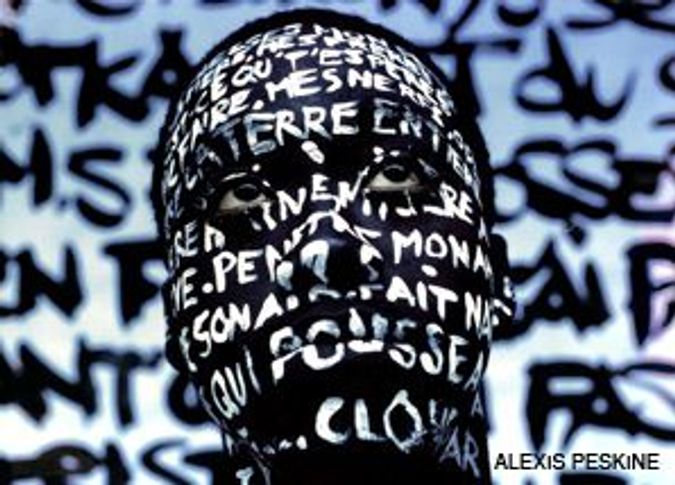 ALL OVER MY FACE: In 'Word?' Peskine photographed a young man with French hip-hop lyrics written across his face. Some have read it as a comment on how hip-hop, an art form adopted by disenfranchised segments of French society, is also one of the only ways the French public hears the voice of the suburbs.

By that time, the work of Alexis Peskine, a French-born visual artist of Afro-Brazilian and Lithuanian Jewish heritage, was becoming one unlikely way for the American public to interpret the images of France’s suburban unrest. The 29-year-old Peskine was born and grew up in a middle-class community near Paris, spent a childhood summer in the States, and eventually attended Howard University and the Maryland Institute College of Art. In 2004, he was awarded a Fulbright to work and study here.

Peskine’s journey to America stretches far beyond his lifetime. His paternal great-grandfather Joachim Peskine, a Vilnius-born Jewish woodworker, had a son who was sent by the Russians on a trip to America to obtain machine tools. As conditions for Jews became more unbearable in Eastern Europe in the interwar period, Peskine’s grandfather moved to France. He eventually survived Dachau and raised Alexis Peskine’s father, an architect who met and married an Afro-Brazilian woman while on the job in Bahia, a coastal area of Brazil. Growing up as a multiracial half-Jewish resident of the French capital, Peskine embarked on an artistic path that eventually would bring him to our shores.

Peskine’s inspiration is drawn from what he regards as an overarching paradox in French society that symbolically awards French identity to all those who accept its norms while at the same time harboring prejudice toward immigrants from France’s former colonies. “It is illegal in France to perform a census that collects ethnic information,” Peskine said during an interview in his studio in Hoboken, N.J. “This idea came from long before immigrants ever arrived in France. There is a denial that there is ethnicity and race within Frenchness.” According to Peskine, this denial is what jabs at the root of the recent unrest in France. “[French society] created a universal system of education that stressed a broad French identity. There was no talk of the colonial legacy,” he said. “I see this as them telling us that within this common culture is French superiority. We are supposed to be proud to be French. But with the racism and ethnic discrimination, we are not.”

In a recent group show at Manhattan’s Rush Arts Gallery, Peskine exhibited a new piece containing three bars of black soap inscribed with three different terms that denote people of African descent. Each soap box is inscribed with a racist term for blacks. By evoking the African body with bars of soap, he suggests to the viewer the liminal connection between the trauma of the Holocaust and the plight of former French colonial subjects. In a previous piece, he also uses bars of soap, each inscribed with “Sale Noir” (“Dirty Black”), “Sale Blanc” (“Dirty White”), “Sale Arabe” (“Dirty Arab”), “Sale Jaune” (“Dirty Asian”) and “Sale Juif” (“Dirty Jew”).

“The problem is one of exclusion,” Peskine remarked as he showed me around his studio, which also serves as a furniture- and piano-restoration workshop. “People of African descent, whether they are African or Arab, feel abandoned by the larger society. The projects they live in are in concentrated areas where the condition of buildings and the lack of employment opportunity make you feel trapped.”

The housing blocks that Peskine describes were not built yesterday. In the aftermath of World War II, when cities in France struggled to accommodate a booming, homeless population in the aftermath of war, shantytowns were erected. In 1962, the Algerian War ended and waves of immigrants from France’s former colonies arrived in the country to fill labor shortages. By 1963, 43% of French Algerians lived in these shantytowns until the government moved to erect massive suburban housing projects to replace them. It was to these projects that working-class citizens first moved. In the coming decades, many of the factories closed and struggling residents began to fill the housing projects, transforming many French suburbs into massive ghettoes where the predominant residents were the formerly colonized, francophone poor — Muslim Arabs and Africans, Maghrebi Jews and ethnic Frenchmen.

Following Peskine’s move to the United States, he began to visually explore the tensions, ills and questions that color the situation in France today. In the painting “Motif,” an image of the 1987 movie character Robocop holding a baguette goofily illuminates the tension between a feisty French police force and a bready symbol of French refinement.

In a bright painting titled “Tintin and Your Kids,” Peskine investigates Tintin, a comic book character whose Belgian creator openly held Nazi views. In the piece, Tintin is recast as a swastika-clad skinhead. In the background, a Congolese flag is minimally visible on a pile of tires.

“I consider myself culturally Jewish,” Peskine remarked. “I come from a long line of Jewish agnostics, and my father has told me tons of stories about my Jewish side, which was closely connected to revolutionary ideas.” When asked about the tensions between Arabs and Jews in France, Peskine responded: “I think there is a lot of resentment and confusion, because the media goes crazy anytime there is an antisemitic incident. If there is a racist incident, there is little to no attention. I think [Arab-Jewish tension] comes in part from jealousy: Jews in France know how to pull heartstrings and Arabs in the suburbs do not. Arabs and blacks see that French society can disrespect them. I understand people’s frustrations, but there is an image of Jewish control in the suburbs that shouldn’t fly.”

His new work is exploring the Arab and African face in the French imagination. He will be using large square wood panels painted with the images of Arab and African women. Their skin will be portrayed by a bed of nails, each at different levels, in order to accentuate texture. An image of Asterix, a French cartoon character, will be drawn around the faces.

Peskine’s career has grown in recent months. He is currently lecturing at universities across the country, was recently represented at the National Black Fine Art Show by two galleries and has work currently on view at the Wadsworth Atheneum Museum of Art in Hartford, Conn., and at the G.R. N’Namdi Gallery in Detroit. Next month, he will have a solo show in New York at the Essie Green Galleries and H&F Fine Arts in Mount Rainier, Md. With the exposure, however, comes the challenge of staying laying down roots. Peskine is currently waiting for a visa extension from the American government. “Some people look to France and see great social benefits — like universal health care, for example,” Peskine remarked. “But if you have ambition, America is where it’s at.”