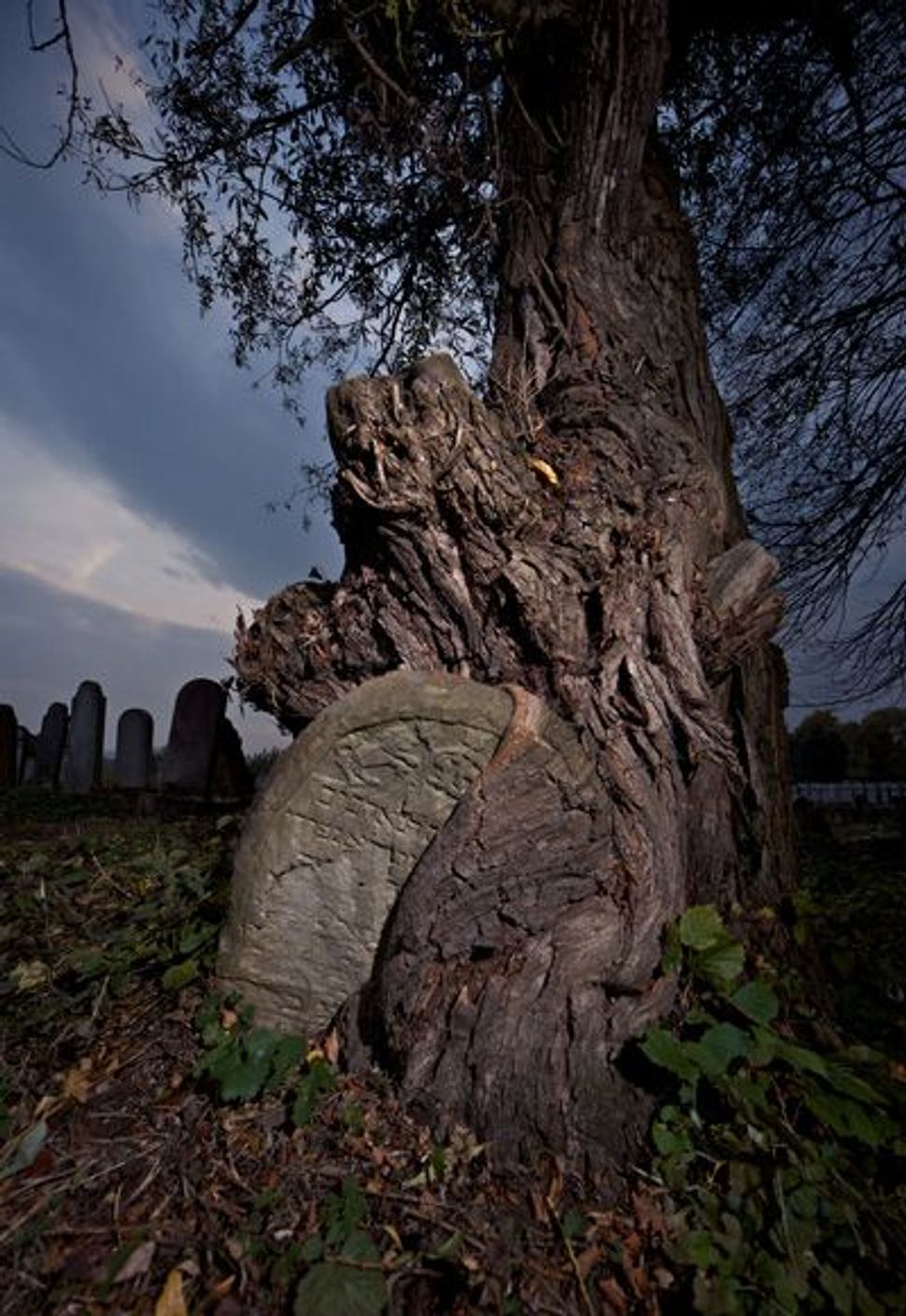 Nature?s Embrace: In this Yuri Dojc photograph, a tree grows around a Jewish gravestone in Slovakia. His photographs and Katya Krausova?s documentary- in-progress will be on display at the Museum of Jewish Heritage in New York in March 2011. Image by YURI DOJC

Photographer Yuri Dojc and filmmaker Katya Krausova recount their journey to document the last shards of Slovakian Jewry in the video below:

The shattering of Jewish glass on November 9, 1938, did more than superficial property damage. As a government-sponsored pogrom at the heart of civilized Europe, it rocked the humanistic foundations of the industrial age and began the seven-year-long Nazi destruction of the edifice of enlightenment across the continent.

Of the many who have tried to gather up the shards of those traumatic years, few are as talented as Canadian photographer Yuri Dojc. Better known for dreamily aesthetic portraits or beautiful, sexy artwork used by advertising agencies, Dojc left Czechoslovakia to study in London for the summer of 1968, only for Russian tanks to roll in while he was away. He emigrated to Canada a year later and would not return to Slovakia until 1988.

When he did return, he found that his father, Ludovit, had become interested in his Jewish heritage, and had co-authored a book about Jewish communities in Slovakia. A haunting photograph of Ludovit sitting behind a hanukkiah, just weeks before his death in 1997, marks the beginning of a quest that would repeatedly take Dojc around Slovakia. He first made 150 photographic portraits of Holocaust survivors, then a series of photographs divided, on his website, into four sections: “Cemeteries,” “Places,” “Fragments” and “Last Folio.”

His partner in this project for the past five years has been filmmaker Katya Krausova, another expatriate Slovak. Based in London, Krausova also wanted to document through film whatever remained of a thousand years of Jewish culture in her home country, and the two of them followed the trails laid out for them by Ludovit’s book.

Together they have traced, recorded and discovered troves of objects saved by the last few Jews of Slovakia and a variety of concerned gentiles. And, despite the suspicions that understandably linger around the non-Jews who witnessed the deportations and murders of their neighbors, there are some remarkable stories. One man, in a town near the Ukrainian border, heard that the communist mayor was about to destroy the synagogue to build a parking lot. That night he moved in with a neighbor and donated his home to store the Jewish books from the synagogue. 30 years later the books remain the sole occupants of his house.

Krausova and Dojc (pronounced Doich) also met a young man in Lucenec who had purchased, for a pittance, a building he wanted to turn into the “largest disco in Central Europe.” He hailed them as they took pictures from outside the fence around the dilapidated structure and seemed amazed in their interest. Convinced they were genuine, he fetched the keys and opened up the building for Dojc to photograph. It was, as they had been told, a vast synagogue that had once served a Jewish community now totally absent.

While Dojc’s photographs of objects, landscapes and synagogues leave him open to the criticism that he is aestheticizing tragedy — making the horrific beautiful — the artworks bear testimony not only to the destruction but also to the fragility and melancholy of the remnants that survived.

The series Dojc calls “Last Folio” is a set of tragically beautiful photographs of books that survived the Holocaust, though many of them are no longer usable. Looking at the body of photographs from which “Last Folio” was chosen, Moshe Halbertal, a Senior Fellow at the Shalom Hartman Institute in Jerusalem, complimented Dojc on his Photoshopping skills. When Dojc asked what he meant — Dojc reads no Hebrew — Halbertal pointed to the only visible text on the ruined leaves of a page that Dojc had randomly moved outside into the light from a shelf: It said “hanishar” — “the remains.”

While the larger project has continued to develop, “Last Folio” has only been exhibited at the Gonville and Caius College Library in Cambridge, England. Scheduled for display at the Museum of Jewish Heritage in New York in 2011, the opening date, March 25, marks the 68th anniversary of the first ever transport to Auschwitz — of young Jewish Slovak girls. As the first inmates there, they were responsible for establishing the routines that would keep them alive, and many became the dreaded and despised kapos, or prisoner-guards. At his father’s funeral Dojc met one such woman, Ruzena Vajnorska, who told him her story and took him to meet other survivors, many of whom she cared for.

Dojc never met his grandfather, and knew him only from a single picture of his father and grandfather. Inspired by this picture, the last few moments of Ludovit’s time with his parents in Slovakia, and by Vajnorska’s example, Yuri Dojc has put together a formidable body of work that has shored up some of the loss against the ruins of Jewish Slovakian culture.

Working in the house near Ukraine in 2008, Dojc and Krausova were engrossed in their individual projects. She spread out on a table a small selection of the decayed books the pair had pulled from the shelves, displaying through their plates and stamps a complete village of owners. A butcher, a haberdasher, a bookseller, each identified in the hodge-podge of German, Hungarian and Russian that served the area. Suddenly Krausova reached for a book. “Yuri, what did your grandfather Jakab do?” “Don’t disturb me, I only have a few moments of light left.” “But was he a women’s fashion dressmaker?” “Yes.” “Yuri, I think this was your grandfather’s book.” And there, in a random village on the Ukrainian border, a certain journey was complete. One book had come full circle for Dojc, but he and Krausova are still in search of what remains.

The exhibition “Last Folio: Remnants of Jewish Life in Slovakia” opens at the Museum of Jewish Heritage on March 25, 2011.

Listen to the tales of Yuri’s photographs at Last Folio.

Watch the trailer that tells the story of Yuri’s images.