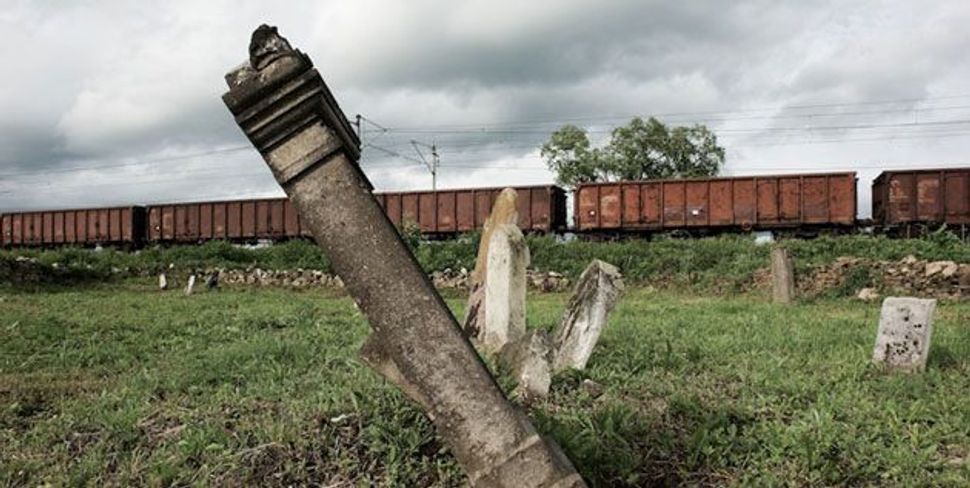 Shedding Light: Would you go to a tombstone decipherer or a stelaeglyphologist for more information on this Slovakian tombstone from the ?Last Folio? exhibition? Image by Yuri Dojc

‘I’m a stelaeglyphologist,” Madaleine Isenberg writes, wanting to know what I think of the word.

If you’ve never heard of a stelaeglyphologist, you’re in good company. No one has. “It’s a word,” Ms. Isenberg informs us, “that does not exist. I gave birth to it when I was really tired of trying to explain what I do. And what I have been doing for the last six years is looking at digitized photographs of tombstones and trying to figure out what’s written there and to translate it — mostly from Hebrew — into English.”

Ms. Isenberg began her current career, so she writes, by helping a friend in Chicago obtain photographs of family tombstones in Slovakia and decipher their Hebrew letters; since then, she has worked on more than 3,200 such inscriptions in 20 different cemeteries. Searching for a name for her new line of work, she took the Greek noun stòlò (plural stòlae), a memorial stone or column bearing a text; added “glyph,” a figure or pictograph, from Greek glyphò, a carving, and topped it off with the familiar “-ology,” from Greek logos, which means word, discourse or field of study. A stelaeglyphologist is, in short, a specialist at reading the writing on tombstones. Ms. Isenberg concludes: “The word may never make it into the dictionary but I think I’ll use it as long as I can, even if most people don’t understand its roots and I still have to explain it. I offer it to anyone else daring enough to spend hours just for the sake of solving the mystery of who is buried in a tiny plot of earth somewhere on this planet.”

If you’ve ever visited an ancient cemetery, whether a Jewish one in Eastern Europe or one elsewhere, and struggled to make out the names and words on its weather-beaten gravestones, you’ll appreciate the value of a good stelaeglyphologist. And I don’t question Ms. Isenberg’s ingenuity in inventing the word. Still, it strikes me as overly complicated. Since a stele is by definition a stone with an inscription (as used by contemporary archaeologists, the word denotes a monumental slab or column commemorating an ancient ruler or event), why not shorten stelaeglyphologist to “stelelogist”? And for that matter, since “stelelogist” means no more to the average English speaker than “stelaeglyphologist,” why not Anglicize it to “tombstonologist”?

“But ‘tombstonologist’ sounds even weirder than ‘stelelogist’!” you’ll protest. So it does — and let’s consider for a moment why.

Although the suffixes “-ology” and “-ologist” are extremely common in English, so that any of us can easily think of dozens of words ending with them, a bit of reflection tells us that we can’t tack them onto just anything. We can say “cardiology,” but not “heartology”; “psychology,” but not “mindology”; “geology.” but not “earthology”; “ichthyologist,” but not “fishologist”; “ecologist,” but not “environmentologist.” The rule, in fact, appears to be simple: We can add “-ology” and “-ologist” to any noun as long as it’s Greek, such as kardia, heart; psykhò, soul or mind; gaia, earth; ichthys, fish, and oikos, home or house. Want to coin a term for the study of hedgehogs? No problem: It’s echinosology, from Greek ekhinos. Just keep plain English words like “hedgehog” and “tombstone” out of it.

Yet is this rule absolute? Not quite. There are some cases in which “-ology” terms are built on English words having no Greek component at all. Think, for example, of “criminology,” “urbanology” and “mineralogy,” or of more recent coinages like “sexology” and “futurology.” Unlike echinosology, such words are immediately understandable. Why not, then, “tombstonology,” too?

Because, you may say, there’s a difference. Although criminology, urbanology, etc., do not have Greek roots, they do have Latin ones from which their respective English component derive (“crime” from crimen; “urban” from urbs and so on). Words like “hog” and “stone,” on the other hand, are Anglo-Saxon. To explain why they can’t be “-ologized,” we merely have to revise our rule to read: We can add “-ology” or “-ologist” to any noun as long as it’s originally Greek or Latin.

And yet there are rare exceptions to this rule, too. Take “behaviorology,” which is also now an accepted term. “Behavior” is composed of the Old English prefix “be-” (as in “become,” “bespeak” and “behead”) and the Old English verb habban, “to have,” and has no Greek or Latin antecedent whatsoever. If we can “-ologize” it, why we can’t we do the same with “tombstone”?

If Ms. Isenberg is truly tired of having to explain what she is, therefore, she can call herself a tombstonologist with my permission. And if that nevertheless grates on her ears, she has other alternatives, such as “tombstone decipherer” or “tombstone specialist,” which don’t call for a Greek-English dictionary. It would definitely be good for business. She is, after all, practicing a profession many of us have felt in need of at one point or another and have wished we could find in the Yellow Pages. Who of us, though, Yellow Pages in hand, would think of looking for a stelaeglyphologist?