Lulu’s Back in Town 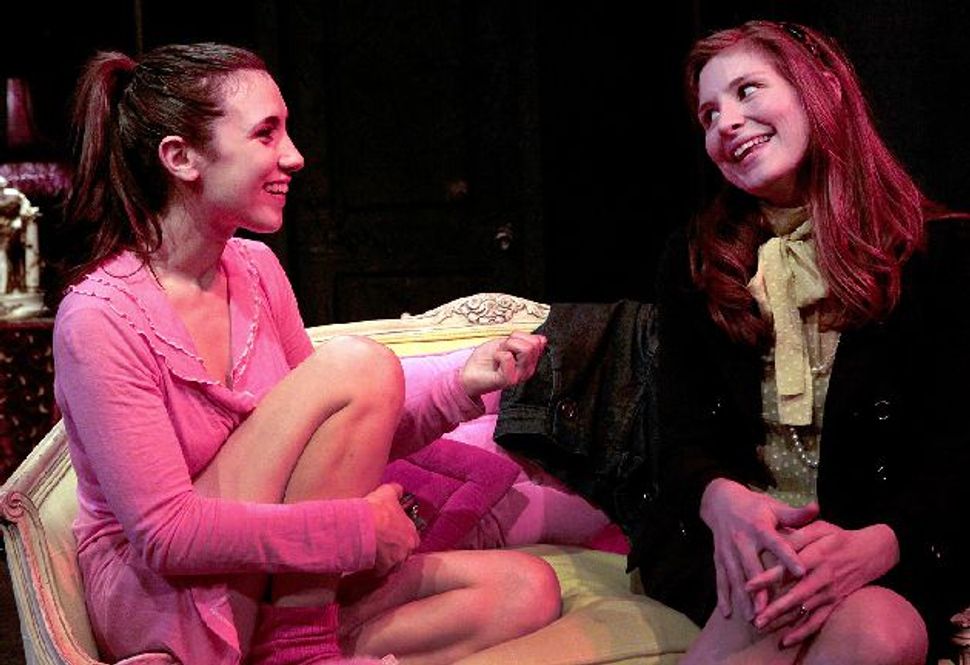 Annika Marks’s bravura performance channels the almost divine sensuality from Franz Wedekind’s “Lulu” plays and G.W. Pabst’s 1929 film “Pandora’s Box,” upon which Nick Kazan’s new work is loosely based. Unlike those dramas, though, the play’s goal is not simply sensual pleasure, but the acceptance of self-serving treachery. For the subtext of Kazan’s production is an attempt to mitigate the controversial role the playwright’s father — Oscar- and Tony-winning director Elia Kazan — played during the era of the Hollywood blacklist.

According to Victor Navasky’s book “Naming Names,” the older Kazan was “the ultimate epitome of a betrayer.” In his 1988 autobiography, he said that he was called a “notorious… ‘informer’ … ‘squealer’ … ‘rat’” after testifying to the House Un-American Activities Committee in 1952 that eight former colleagues at the Group Theatre had been Communist Party members. Like other cooperative witnesses, Kazan was allowed to continue working, while those who refused to inform were blacklisted.

It’s revealing that Nick Kazan’s play — premiered January 28 by Ensemble Studio Theatre LA — depicts an act of opportunistic betrayal. In the second act, Lulu finds herself wrongfully imprisoned for allegedly murdering her conventional ex-boyfriend, Charles (William Duffy alternates in the part with Andy Lauer). Guards videotape Lulu’s meeting with her Australian half-brother, Kip (Will Harris), when he visits her in the prison library. Kip confesses that when police interrogated him, he not only implicated Lulu in Charles’s death, but also lied about having incestuous relations with his half-sister.

“He went along with it in order to placate the authorities and make sure he stays in the country,” the playwright explained in an interview with the Forward. Kazan, who himself was nominated for an Oscar for the 1990 screenplay of “Reversal of Fortune,” described Lulu’s reaction to Kip’s treason: “She’s stunned and horrified that he went along with it, but it’s hard to blame someone for being himself. If you have a friend who’s a drunk, it’s hard to bear a grudge against them for drunken behavior…. She forgives him, and once he says, ‘Don’t be gruesome; of course we didn’t have sex,’ she blows him a kiss.”

Placed within the broader context of Elia Kazan’s infamous role in the HUAC hearings, the theme of expedient disloyalty in “Mlle. God,” takes on new meaning. It’s an especially significant theme since the play premiered less than two months before the 60th anniversary of HUAC’s second wave of purges against the Hollywood left. These hearings took a dramatic toll not just on the politically progressive, but also on the heart of Jewish Hollywood. They began on March 21, 1951, with the heartbreaking testimony of actor Larry Parks, best known for his portrayals of Al Jolson. Despite Parks’s star status, his acting career was destroyed, even though he eventually informed on others. He was the first of about 110 Tinseltown talents who were called to testify.

Film historian Dave Wagner, co-author of four books on HUAC’s witch-hunts of Hollywood leftists, including “Radical Hollywood: The Untold Story Behind America’s Favorite Movies” (The New Press, 2003), told the Forward: “One of the great themes after the blacklist is of the informer and falsely accused victim.” Arguably, this trend’s prime example was 1954’s “On the Waterfront,” which won eight Oscars, including best picture, a best director award for Elia Kazan and best screenplay for screenwriter Budd Schulberg — both former members of the Communist Party and informers to HUAC. After Kazan’s testimony, he published a self-justifying ad in The New York Times and “emerged in the folklore of the left as the quintessential informer,” according to Navasky.

Kazan and Schulberg further sought to justify themselves through “Waterfront.” Partly a defense of their naming of names, the film is redolent with betrayal. Its iconic scene takes place in a taxi’s backseat, as ex-boxer Terry (Marlon Brando) has a gun pulled on him by his shyster brother, Charley (Rod Steiger), who is trying to stop him from testifying against mobsters. Terry reminds Charley that Terry’s boxing career was ruined because of his brother’s earlier order to throw a fight.

Terry goes on to testify against the corrupt union boss, and the informer becomes the hero.

Anger toward the unrepentant Elia Kazan persisted until his death in 2003. In 1999, when the Academy of Motion Picture Arts and Sciences presented Kazan with a Lifetime Achievement Award, The Committee Against Silence protested. During the ceremony, Nick Nolte, Ed Harris, Steven Spielberg and Tom Hanks reportedly sat on their hands instead of applauding. Even today, Kazan remains topical, with a recent set of essays on his professional method out last year from Alfred A. Knopf, and a fresh collection of biographical essays, “Kazan Revisited” published in January by Wesleyan University Press.

Given this context, Elia Kazan’s son’s portrayal and forgiveness of a turncoat who informs for personal gain is telling. When Kip’s betrayal of his jailed half-sister was described to onetime blacklisted screenwriter Norma Barzman — author of the 2003 book “The Red and the Blacklist” — Barzman stated: “It sounds as if he’s dealing with his father’s blacklist issues — and in a very strange way…. Nick must be terribly troubled by what his father did.”

When asked if Kip’s opportunistic betrayal of Lulu reflects his father’s HUAC activities and the Blacklist, the playwright laughed and responded: “It never occurred to me. In fact, I don’t think I was unconsciously dealing with it, either. Maybe I was — but it never occurred to me.” Describing his creative process, Kazan added: “I don’t always know why I do what I’m doing. I do it by feel…. The way I work, things are revealed to me.”

Intriguingly, Robert Trebor (who alternates with Keith Szarabajka in the role of Melville) resembles Elia Kazan. When asked why he named the artist Melville, the playwright replied, “I don’t know…. You know, when I’m writing something, I just pluck names out of thin air. If the name works, I keep it.” Perhaps in “Mlle. God,” Nick Kazan has an Ahab-like obsession with the Great White Whale of redemption.

“Mlle. God” runs through March 6 at the Atwater Village Theatre in Los Angeles.

Lulu’s Back in Town